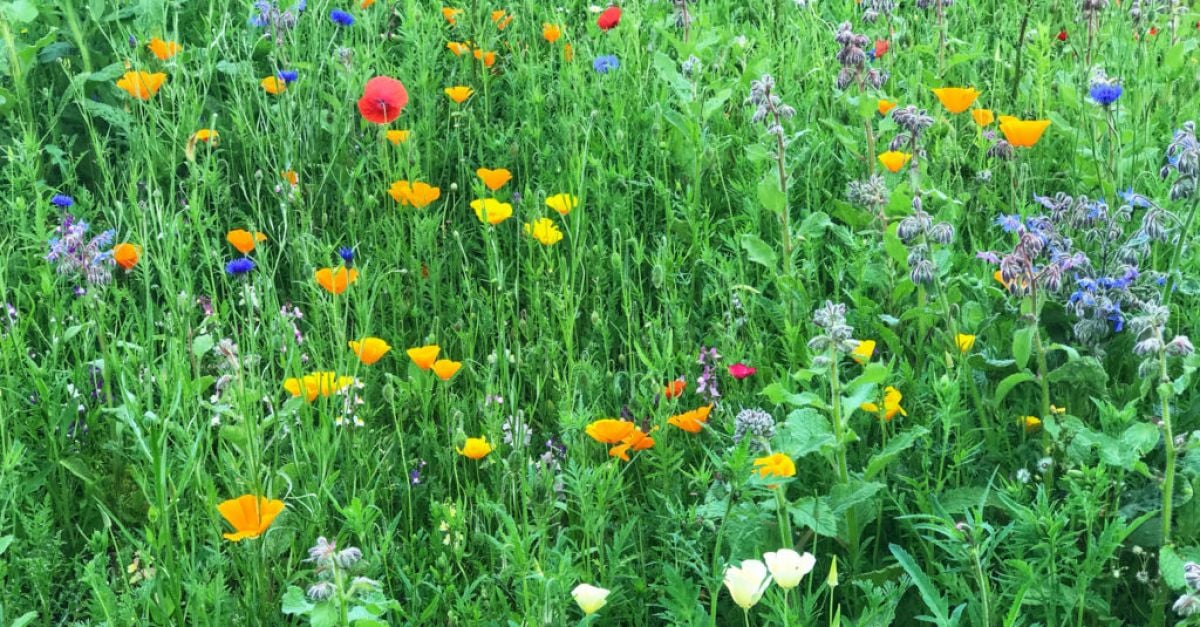 As well as being good for biodiversity, rewilding a patch of your garden can also provide a wealth of riches, including valuable fertiliser and delicious tea.

Wildflowers, weeds and plants that may once have been considered an invasive nuisance can be harvested and used to enrich your plot – and your life.

Growing a patch of comfrey as part of your rewilding scheme could save you a lot of money in shop-bought fertiliser and do the same job.

The plant sucks up nutrients from the soil and it’s easy to make a liquid feed by filling a bucket with leaves, adding water and then leaving it to steep for a week or two before pouring the (very smelly) liquid onto crops. What’s left can be added to the compost heap to enrich it and help break it down.

Stabilise your soil with colour

You may scatter wildflower seeds over your rewilding plot to add colour to the area and encourage pollinators into your garden. But planting wildflowers can also keep soil healthy and once established, their roots will help stabilise your soil, according to Grow Wild (kew.org), the national outreach learning initiative of the Royal Botanic Gardens, Kew.

This means that during extreme weather such as persistent torrential rain, the roots will help secure the soil particles and nutrients, which could otherwise wash away. Strong root systems are particularly important on sloping plots, where the ground can easily be washed away without stabilising root systems.

Have a cup of nettle tea

Nettles seem to pop up everywhere on ground that’s been left to do its own thing, so pop on a pair of gloves and pick some leaves for making a brew.

The Woodland Trust (woodlandtrust.org.uk) suggests picking the tips of the leaves for the best flavour. Then you can put them in a saucepan with plenty of water, adding honey for sweetness, and boil them for around 15 minutes, before straining and serving. You could even make iced tea if you pour the mixture into a jug and put it in the fridge, before serving with ice.

Some weeds such as chickweed and goosegrass are edible and can be cooked and eaten like spinach. Leaves of dandelions and sow thistle can be added to salads too.

You may find brambles unsightly and the prickly stems painful, but leave some to roam wild and they’ll give you delicious blackberries from August onwards. Their white flowers, which appear in early summer, are also a great food source for bees.

Be a ground elder glutton

Ground elder, one of our most pernicious weeds, was first imported into Britain by the Romans as a vegetable – until it was found to be invasive. It will quickly take over flower beds and borders if left to roam freely.

It’s likely to appear at some point if you rewild an area, and is almost impossible to eradicate because you have to remove every little piece of white root – if you leave any fragments in the soil, they will regrow.

So try to control it by digging up at least some of it to eat. It was used in the Middle Ages to cure gout and tastes a bit like parsley, so add some leaves to your salad to perk it up.

Leaves are best picked young in spring, with as much of the stem as you can retrieve, before the leaf has fully opened, and taste best fried in olive oil. Avoid mature leaves as they can leave a nasty taste in the mouth.

You often find it in hedgerows and woodlands – and cow parsley may well pop up in your rewilding patch. You could add it to indoor flower displays for a touch of white froth, as you would gypsophila, or follow an ancient tradition to ward off mosquitoes by applying it directly to your skin.

Lung Cancer screening on decline due to COVID