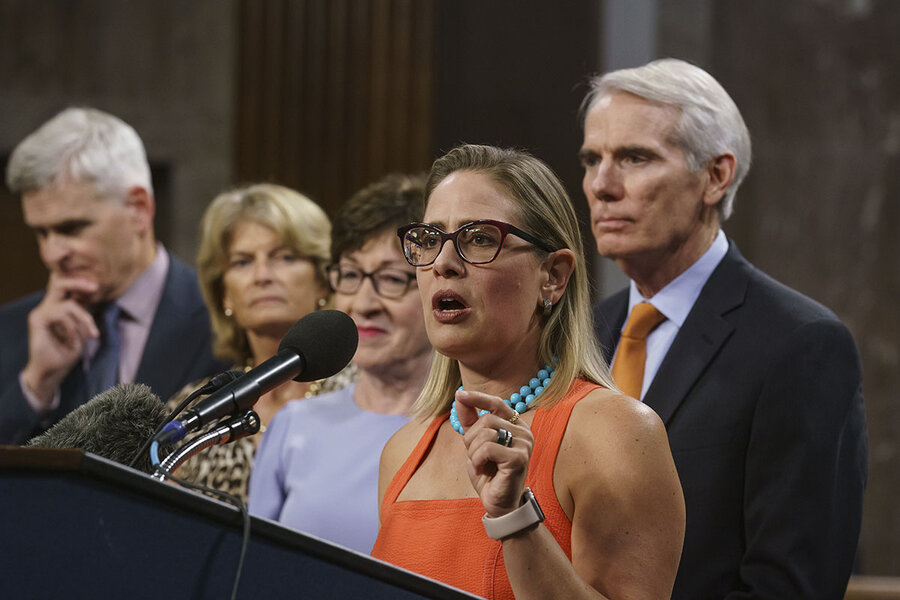 Sen. Kyrsten Sinema knows a thing or two about crusading for justice. As an activist back in the early 2000s, she protested the Iraq War in a pink tutu. And as a first-term Arizona state legislator, she routinely delivered scathing speeches against her Republican opponents, marching back to her office filled with righteous indignation – only to see the GOP’s bills pass.

Now, after transforming herself into a pragmatic coalition-builder willing to work with conservative allies, she’s on the receiving end of that indignation.

Using the same approach that helped her become the first Democrat from Arizona elected to the U.S. Senate in 30 years, Ms. Sinema has co-spearheaded a $1 trillion bipartisan infrastructure bill that would deliver badly needed improvements to America’s roads, bridges, water systems, broadband internet, and more – and prove that the American model of governance is still viable.

Kyrsten Sinema, a once-strident liberal who now charts a pragmatic path, is spearheading Congress’ most significant infrastructure bill in years. Some Democrats see the bipartisan effort as capitulation.

“This bill fixes our democracy as much as it fixes our roads and bridges,” said Rep. Tom Malinowski, a New Jersey Democrat and member of the House Problem Solvers Caucus, which helped develop some of the underlying ideas in the bill and held a bipartisan press conference Friday with five of the senators involved to urge its passage in both chambers. “To my fellow Democrats, I would say – let’s seize this opportunity.”

But at a time when Democrats control the House, Senate, and White House, some see bipartisanship as an unnecessary capitulation on their grand agenda. The Arizona realities that pushed Ms. Sinema to reach out to Republicans stand in contrast with the current alignment of power in Washington – one that liberal Democrats are keen to capitalize on, including by passing their “human infrastructure” priorities, with investments in child care and mitigating climate change.

With the support of President Joe Biden, who campaigned on promises of working across the aisle, those priorities have been put in a separate $3.5 trillion bill that Democrats are hoping to pass through a fast-track budget reconciliation process that wouldn’t need a single GOP vote – if, that is, all Democrats vote for it. But on the same day Ms. Sinema and fellow bipartisan negotiators announced their physical infrastructure deal, the Arizona senator also said she would not support a budget bill with that big a price tag, drawing the ire of progressives within her own party. That intraparty dispute could jeopardize the bipartisan bill when it comes to a vote in the House, where Democrats hold only a narrow margin and many Republicans are not expected to support the legislation.

“Good luck tanking your own party’s investment on childcare, climate action, and infrastructure while presuming you’ll survive a 3-vote House margin – especially after choosing to exclude members of color from negotiations and calling that a ‘bipartisan accomplishment,’” tweeted Rep. Alexandria Ocasio-Cortez of New York.

A pivot in approach

Ms. Sinema, an elusive senator who rarely talks to the press on Capitol Hill, may see echoes of herself in Ms. Ocasio-Cortez. She, too, kicked off her legislative career as a passionate 20-something, unabashedly railing against her adversaries. But her first term in the Arizona state legislature was, by her own account, a bust, prompting her to rethink her approach.

She took a hard look at herself, and decided to invest in building relationships – including with some of the most conservative members of Arizona’s GOP-controlled legislature. By learning to talk about shared values and common interests before delving into specific outcomes, she started to get things done.

Ms. Sinema, who identifies as bisexual, led a successful effort to defeat a same-sex marriage ban by pioneering a new strategy. Because the proposed amendment would have affected the legal rights and health-care access of domestic partners, her coalition sought to broaden opposition to the measure by highlighting its impact on unmarried straight couples – including teachers, firefighters, and a sizable older population who had found new partners but couldn’t afford to give up their late spouse’s pension or Social Security payments. Arizona became the first state to defeat such a measure after 28 had passed elsewhere, but LGBTQ advocates were frustrated that she rejected their messaging around discrimination.

She also got a law passed protecting mothers who breastfeed in public by shifting the conversation from women’s rights to a mother’s need to care for her child, recruiting conservative mothers to lobby recalcitrant GOP lawmakers. And, together with then-state Rep. Andy Biggs, who has since become the chairman of the House Freedom Caucus, she successfully pushed legislation to divest Arizona’s pension fund from companies perpetuating the Darfur genocide.

In describing the recipe for her success, she exemplifies one of the key ingredients – humor – saying groups that take themselves too seriously usually peter out.

“Within a few months, it’s turned into the West Bay Peace Activists for the Protection and Liberation of Oppressed Peoples in Moldova, with a group membership of six,” writes Ms. Sinema, a colorful figure who once dubbed herself a “Prada socialist” in a nod to her striking wardrobe that reportedly includes more than 100 pairs of shoes as well as wigs that she sometimes wears to Senate votes. “And if you’re not wearing all-hemp clothing, listening to Cat Stevens, and making your own paper and soy ink, you are not welcome – which isn’t a problem for you, because you don’t want to work with those stiffs anyway.”

Sen. Bill Cassidy, a Louisiana Republican who has been instrumental in developing the bipartisan infrastructure bill, credits Ms. Sinema’s sense of humor with defusing tensions that arose during the many long hours spent negotiating. She was also frank, telling her fellow senators to move on once the group had made a decision on a thorny point and some were hard put to accept their losses.

“She was our ringleader. She kept us on task,” says GOP Sen. Lisa Murkowski of Alaska. “She would say, ‘Enough! We resolved it. We’ve agreed. Let’s get refocused.’”

Her colleagues also credit Ms. Sinema, the first sitting member of Congress to complete an Ironman triathlon, with her relentless persistence and focus, even as various developments threatened to sink the talks. “She’s tireless,” says Democratic Sen. John Hickenlooper of Colorado. “There were a lot of distractions over the course of these last weeks. She wasn’t distracted.”

Even Sen. Ted Cruz of Texas, one of the body’s most conservative Republicans, praises her.

“I think she’s demonstrated a lot of courage being willing to stand up to the more extreme voices in her party,” says Senator Cruz, who is not part of the bipartisan infrastructure group but has worked with Ms. Sinema on previous legislation. “She has expressed a lot of willingness to work together across the aisle on productive legislation. That’s a sentiment and a willingness that is unfortunately far too rare on Capitol Hill.”

But where supporters see a welcome brand of Democratic pragmatism, others see a sellout.

It’s not a new charge; her office has been fielding vitriolic calls for years – and some of the worst ones come from fellow Democrats. But with an evenly split Senate, and Democrats hard put to get to the 60-vote threshold needed to prevent Republicans from blocking their bills, Ms. Sinema – together with Sen. Joe Manchin of West Virginia – has come under particular fire for her refusal to scrap the filibuster.

Last month, she defended her decision to support the filibuster and thus compel cross-party cooperation because she sees it as the best way to find realistic, lasting solutions.

“Bipartisan policies that stand the test of time could help heal our country’s divisions and strengthen Americans’ confidence that our government is working for all of us and is worthy of all of us,” she wrote in a Washington Post op-ed.

The bipartisan infrastructure bill has made it farther than many detractors predicted, but it still faces a number of hurdles. This week, the Senate will need to take two procedural votes before it can vote on whether to pass the bill. The bipartisan group hopes to see that happen by week’s end, when senators are set to take a monthlong recess. Democratic Majority Leader Chuck Schumer of New York has indicated he may delay their recess, if needed, to get the bill passed.

Preliminary votes have garnered more than enough Republican support to meet the 60-vote threshold needed. But the legislative text wasn’t completed until Sunday, and although senators were shown significant chunks of the bill ahead of time, they could well find details they don’t like buried in those 2,700 pages.

The bigger hurdle will come when the bill moves to the House, where Speaker Nancy Pelosi has vowed not to hold a vote on it until both chambers pass the $3.5 trillion bill with Democrats’ human infrastructure priorities.

On Friday, the Problem Solvers Caucus pushed Speaker Pelosi to hold a standalone vote on the bipartisan bill as soon as the Senate passed it, with about two dozen lawmakers and even one of their dogs taking turns at a lectern outside the House.

“Madam Speaker, we all know that you can single-handedly stop this bill,” said Dusty Johnson, a Republican member of the caucus from South Dakota, as an American flag atop the Capitol fluttered in the hot breeze. “Instead, we would ask that you honor the real work, honor the legislative breakthrough, by doing something simple, elegant, decent: Give us a vote.”

Senator Manchin, who along with Ms. Sinema has drawn the ire of more progressive Democrats for refusing to capitulate to his party, underscored Americans’ common interest in infrastructure investment.

“I’ve never seen a pothole with an ‘R’ or ‘D’ on it – it’ll bust your car, tear your car up, I don’t care who you are,” said Mr. Manchin of West Virginia. “This is what America wants.”

Perhaps it’s no coincidence that Mr. Manchin, a Democrat who represents a mainly Republican state ranked 50th out of 50 states on its infrastructure, is among those leading the charge to pass this bill.

Senator Murkowski, a Republican whose home state of Alaska fares a little better at 40th, wants to see Congress do something concrete for once. Speaking after Mr. Manchin, she took aim at “messaging” bills that have little hope at passage but serve mainly to signal what is important to a party.

“We’re sick and tired of sending messages that just send a message and don’t fix Joe Manchin’s pothole,” she said.

With spotlight on Sunisa Lee, a moment of pride for Hmong Americans