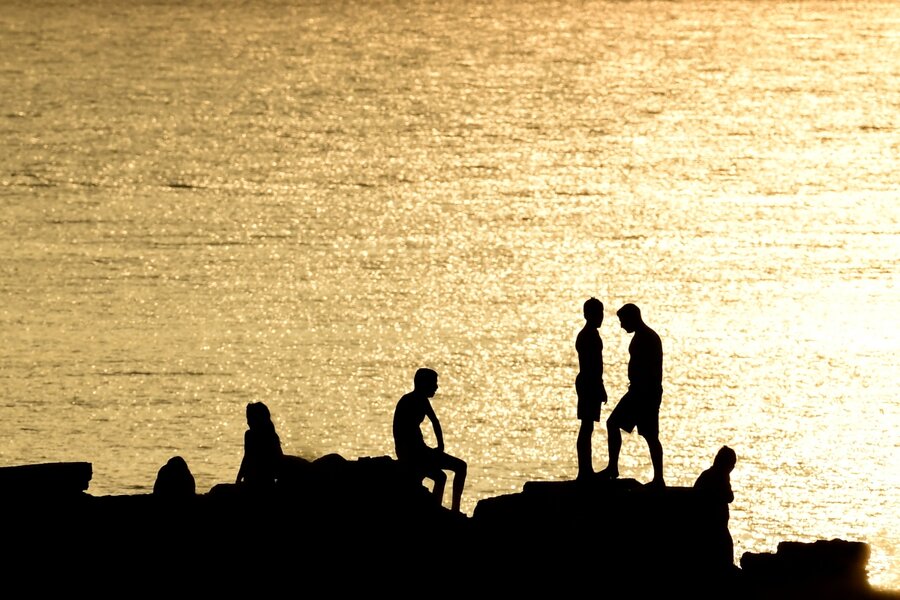 A heat wave baking southeast Europe has fueled deadly wildfires in Turkey and threatened the national power grid in Greece as governments scrambled Monday to secure the resources needed to cope with the emergency.

Temperatures reached 45 degrees Celsius (113 degrees Fahrenheit) in inland areas of Greece and nearby countries and are expected to remain high for most of the week.

Battling deadly wildfires along its coastline for the sixth day, Turkey broadened an appeal for international assistance and was promised water-dropping planes from the European Union. The fires have been blamed for the deaths of eight people in recent days.

The help for residents in Turkey’s fire-ravaged areas couldn’t come soon enough. At the coastal village of Bozalan, resident Esra Sanli looked over at the blaze.

“It’s burning. It’s obviously burning. There’s no plane, there’s no helicopter, there are no [access] roads,” she said, sobbing. “How is this going to be extinguished? How?”

In Greece, an emergency was declared in fire-hit areas on the island of Rhodes, which is near the Turkish coast. Workers with health conditions were allowed to take time off work, while Greek coal-fired power stations slated for retirement were brought back into service to shore up the national grid, under pressure due to the widespread use of air conditioning.

Pregnant and other vulnerable workers in North Macedonia were told to stay home.

Dann Mitchell, a professor of climate science at the University of Bristol, said the heat wave in southeast Europe “is not at all unexpected, and very likely enhanced due to human-induced climate change.”

“The number of extreme heat events around the world is increasing year on year, with the top 10 hottest years on record all occurring since 2005,” Mr. Mitchell told The Associated Press.

“This year, we have seen a number of significant events, including a particularly dramatic heat wave in western Canada and the U.S., that was extreme even for current levels of climate change,” Mr. Mitchell said. “These black swan events have always happened, but now they sit on the background of a hotter climate, so are even more deadly.”

As hot weather edged southward, Italy and Croatia were experiencing storms as well as wildfires. A small tornado in Istria, on Croatia’s northern Adriatic coast, toppled trees that destroyed several cars, hours before a large wildfire erupted outside the nearby resort of Trogir, threatening homes and the local power supply.

Some 30 people were treated for light smoke inhalation in Italy’s coastal city of Pescara after flames tore through a nearby pine forest. Beach-goers nearby had to be rescued by sea Sunday from that wildfire.

“That zone of pine forest is a nature reserve, and it’s completely destroyed. It brings tears to see it. The environmental damage is incalculable. This is the heart of the city, its green lung and today it is destroyed,” Pescara Mayor Carlo Masci said.

Cyprus, recovering from a major wildfire last month, kept water-dropping planes on patrol to respond to fires as they broke out.

“If you don’t react right away with a massive response to any outbreak, things can turn difficult quickly,” forestry service chief Charalambos Alexandrou told state-run media. “The conditions are war-like.”

On a visit to the power grid operator Monday, Greek Prime Minister Kyriakos Mitsotakis urged members of the public to avoid daytime use of ovens, washing machines, and other energy-demanding appliances to reduce the risk of blackouts. He described the weather conditions in Greece as the most severe since a deadly heat wave in 1987.

It was the year that Ioanna Vergou, deputy mayor of the northern Greek town of Skydra, was born. The town of 5,500 briefly ranked among the hottest in the country. She said municipal workers had been given earlier shifts and those needing public services were handed water and sent to an air-conditioned waiting area.

“Many people here have compared the heat wave to what happened in 1987,” she said. “But hopefully it will be easier this time round. We are all just waiting for it to pass.”

A European getaway or office work? ‘Workcations’ bring both.