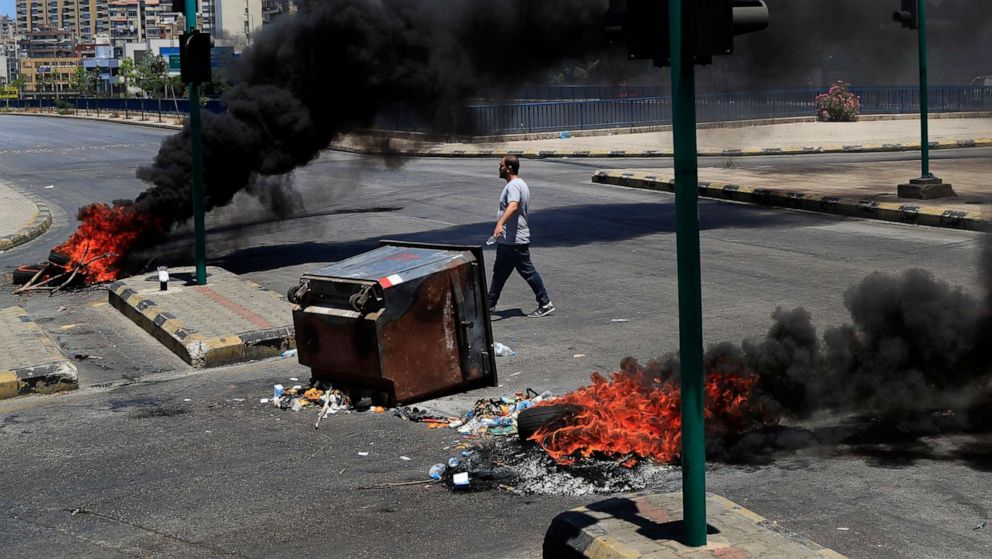 One year after the blast that destroyed the port of Beirut and a large part of the city, the families of the dead are still looking for answers.

In the aftermath of the huge blast at a warehouse in the port of Beirut, where 2,750 tons of ammonium nitrate, a fertilizer which can also used as an explosive, had been left there for years, the authorities promised the results of an investigation within days. Instead, not only has the investigation barely advanced, the area around the port blast has barely been repaired, serving as a metaphor for the Lebanese capital’s recent woes.

At least 218 people were killed in what has been described as one of the largest non-nuclear blasts ever recorded, causing billions of dollars in damage. A report by Human Rights Watch published on Aug. 3 has pointed the finger at some government officials, saying some “foresaw the death that the ammonium nitrate’s presence in the port could result in and tacitly accepted the risk of the deaths occurring.”

The caretaker government issued a statement saying the report was “faulty” and “deviates from the truth.”

The country’s problems run far deeper than rebuilding the city, once nicknamed the “Paris of the Middle East.” According to the World Bank, Lebanon is in the midst of an economic crisis that ranks in the top 10, and possible the top three, experienced in any single country since the mid-1800s.

Last year Lebanon entered hyperinflation – and each week the Lebanese pound depreciates in value, leaving goods unaffordable for the once affluent middle class, which has now, according to experts, ceased to exist.

According to the World Bank data, overall poverty in Lebanon was estimated at 27% in 2011, before the Syrian Civil War. Now, however, more than half the population is living below the poverty line, according to UNICEF. Over the past two years alone, the level of extreme poverty has risen threefold, according to the U.N. – and the price of food and drink has risen by 670%. That has left 1.5 million people in need of humanitarian and financial aid.

“For over a year, Lebanese authorities countered an assailment of compounded crises—namely, the country’s largest peace-time economic and financial crisis, COVID-19 and the Port of Beirut explosion—with deliberately inadequate policy responses,” according to the World Bank’s latest report in April 2021. “The inadequacy is less due to knowledge gaps and quality advice and more the result of a combination of (i) a lack of political consensus over effective policy initiatives; and (ii) political consensus in defense of a bankrupt economic system.”

The World Bank describes the collapse as a “deliberate depression,” and on the streets of Beirut Lebanese cannot hide their disdain for the ruling classes.

“This explosion was a disaster for all people,” Raghda Tawfik El-Ashry, 57, a clothes seller, told ABC News. “I was here when it happened, and I saw what nobody had seen. All my goods were damaged because the fire and the ashes fell on them. Where was the state?”

“They are all a bunch of criminals and it’s all about nepotism,” she said. “I won’t remain silent.”

The government, according to Maya Yahya, director of the Malcolm H. Kerr Carnegie Middle East Center, a think tank, has created “no policy” since the Beirut blast. In the aftermath of the 1975-1990 Civil War, a political settlement was reached that has allowed sectarian groups and political actors to all be represented in government, “which basically took away oversight,” Yahya said.

“The militia heads [were allowed] to simply move into government positions,” she said. “They treated the state and its institutions as a war booty. They turned to state institutions into extensions of their own fiefdoms.”

That legacy has plagued the country to this day, she said, while political assassinations, beginning with the killing of Rafic Hariri in 2005, have become a regular feature of political life, she said.

“The message is quite clear. If you raise your voice too much, the threat of physical violence is an instrument we’re always ready to use,” she said.

Most families rely on backup fuel generators, medicine is increasingly scarce and long queues at gas stations are now a fact of daily life in the country.

Elie Jabbour, 24, a recent graduate with a civil engineering degree, told ABC News that of his class of 100, only two had gone on to find meaningful work, and around half at left the country. Each day comes a period, he said, there are hours without electricity, which has become a daily routine.

“We are fully relying on these generators, which are very toxic for the environment,” he told ABC News. “And they are they cannot stand this 24-hour supply of electricity. And this is affecting us since we are living in a [pandemic-induced] lockdown, kind of a lockdown. So our life is highly dependent on the Internet. And in the time where there’s no electricity, there’s no Internet, and there’s in this time, we cannot do anything.”

“[The Lebanese people] have lost hope,” he added. “They are trying to fight with whatever is remaining, they are losing money by the day and there’s no middle class anymore.”

Many young, educated Lebanese are now fleeing the country in search of “dignity,” Rani, a 25-year-old resident of Beirut, told ABC News. He is planning to join abroad.

“The situation right now in Lebanon is beyond horrendous,” he said. “We have multiple crises. We have the crisis of the pandemic, an economic crisis, an ethical crisis, a cultural crisis. Education is going down. Finding food – basic necessities – being able to supply yourself with basic necessities is growing more and more difficult.”

“The demand is very high because of the crazy prices of the necessities,” Soha Zaiter, Head of the Lebanese Food Bank, told ABC News. “A lot of people lost their jobs in the crisis so they don’t have any income; on the other hand, for people that still have their jobs, the value of the salary is very low in comparison to the prices. People are in need of everything, literally everything. From the smallest things to the most important items, like milk, diapers, oil, rice.”

According to independent Lebanese economist Roy Badaro, Lebanon requires new leadership — a single unitary government that can navigate the competing interests of various groups, in order to pave the way out of the crisis.