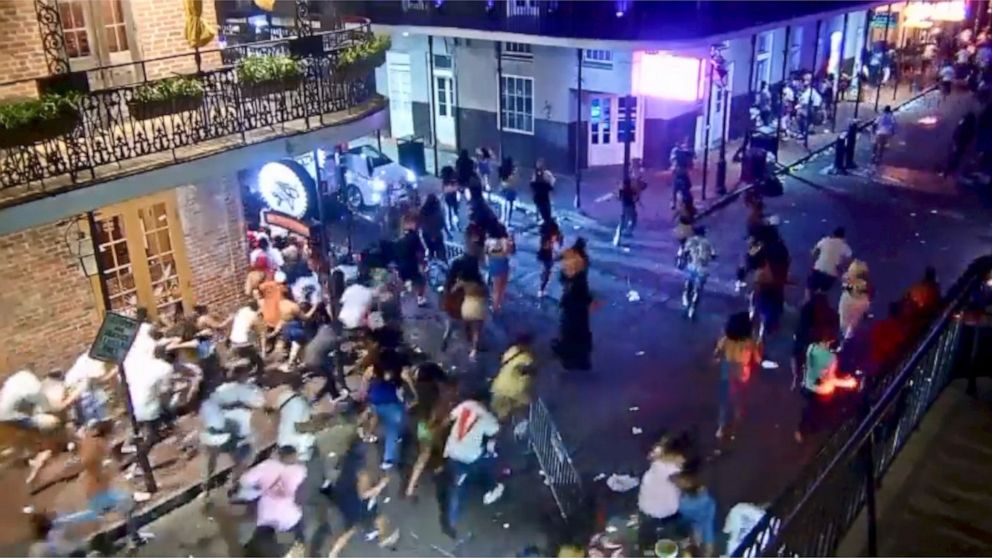 One of five people shot over the weekend on Bourbon Street in the heart of New Orleans’ French Quarter was identified on Monday as one of two suspects in a gunfight that sparked panic in the popular tourist destination, police said.

New Orleans Police Chief Shaun Ferguson made the announcement at a news conference Monday in which he called an eruption of weekend gun violence “very disturbing, very alarming.”

He said police are searching for a second man suspected of being involved in the shooting. He released a grainy security camera image of the suspect and asked anyone with information about his identity to contact the police immediately.

The shooting broke out just after 2 p.m. Sunday on Bourbon Street and Orleans Avenue about two blocks from Jackson Square and around the corner from the famed Preservation Hall, according to police.

Meanwhile, an EarthCam video camera mounted on Cat’s Meow Karaoke Bar, which normally provides a live feed of the party scene on Bourbon Street, captured the sound of multiple gunshots followed by chaos with panicked people running for cover in all directions. Several people narrowly avoided being hit by cars crossing Bourbon Street.

“One of the victims we do believe was a shooter in this incident,” Ferguson said. “We do believe there was an exchange of gunfire between two individuals.”

The chief did not release the wounded suspect’s name.

“His involvement is still under investigation. That is why we have not made a formal arrest,” Ferguson said.

He described the second suspect as a heavyset Black man, in his 30s, 5-foot-6 to 5-foot-7, with short dreadlocks or curly long twists.

Ferguson said a motive for the shooting remains under investigation.

About two-and-a-half hours after the Bourbon Street shooting, four people were shot in the adjacent Iberville neighborhood just northeast of the French Quarter. Ferguson said a 15-year-old boy was killed in the incident and another 15-year-old boy was arrested in the homicide after his mother turned him in, police said.

He said a motive for the shooting is under investigation, but that the suspect’s mother told him her son and the victim were once friends.

Ferguson said Sunday’s gun violence came after the city saw homicides fall to 23 in July compared to 25 in June.

New Orleans has recorded more than 250 shootings and more than 100 homicides already this year. In 2020, New Orleans police investigated 195 homicides, a 63% increase from 2019, according to police department crime statistics.

“Overall crime was down last week compared to the previous week,” Ferguson said. “This weekend just put a black eye and dampened the spirit of what we’ve been actually accomplishing over the last few weeks.”

In push for police reform, small steps no longer enough