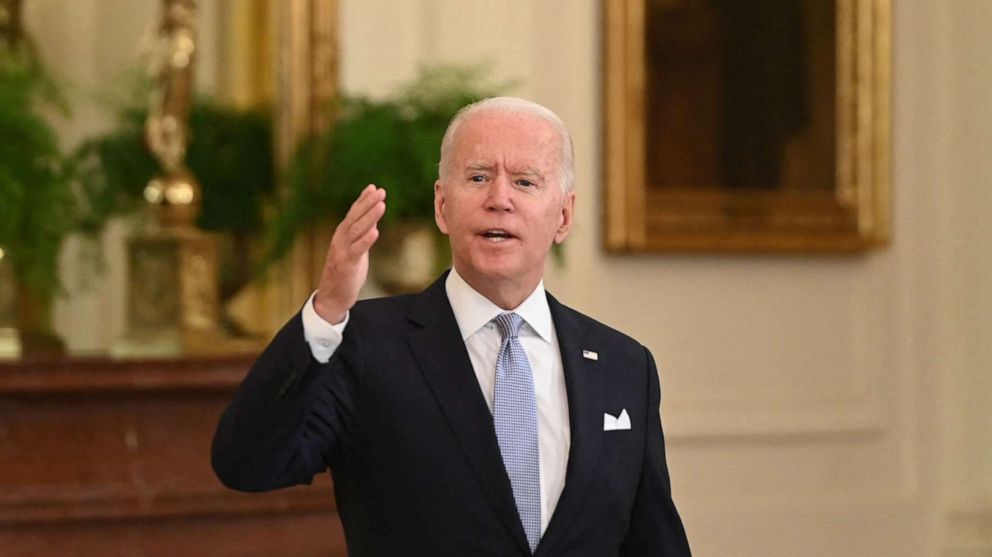 President Joe Biden has issued yet another impassioned address on the state of the pandemic, but for those who stand in defiance of guidance from health experts, does this latest lecture even matter?

In the latest ABC News/Washington Post poll, 3 in 10 adults said they have not gotten a coronavirus vaccine and definitely or probably will not get one. In this group, 73% said U.S. officials are exaggerating the risk of the delta variant — and 79% think they have little or no risk of getting sick from the coronavirus.

It’s a dynamic that has fueled the surge that the president and members of his administration have dubbed the “pandemic of the unvaccinated.”

“It’s about life and death. That’s what it’s about,” Biden said “I know people talk about freedom. But I learned, growing up at school and from my parents, with freedom comes responsibility. Your decision to be unvaccinated impacts someone else. Unvaccinated people spread the virus. They get sick and fill up our hospitals.”

Now, Biden has shifted to finding ways to compel the workers, at least under his purview, to get the shots with an announcement of a vaccine requirement for federal workers and contractors. Those who fail to do so will have to make an indefinite commitment to consistent testing, masking and social distancing.

“I had asked the Justice Department to determine whether that is — they’re able to do that legally, and they can,” said Biden. “Local communities can do that. Local businesses can do that. It’s still a question whether the federal government can mandate the whole country, I don’t know that yet.”

It remains to be seen if piecemeal mandates can have the impact needed to stem the spread of COVID-19 variants that will only continue to mutate as the unvaccinated are infected in large numbers.

The latest of the long-lasting economic effects of the COVID-19 pandemic surfaced on Thursday despite being on the horizon for quite some time.

In a statement, the Biden administration called on Congress to extend a federal freeze on evictions that is set to expire on Saturday. The White House said they are unable to act on their end after a June Supreme Court ruling said that Congress would be the body that needed to pass legislation to further extend the policy beyond July 31.

“Given the recent spread of the delta variant, including among those Americans both most likely to face evictions and lacking vaccinations, President Biden would have strongly supported a decision by the CDC to further extend this eviction moratorium to protect renters at this moment of heightened vulnerability,” White House press secretary Jen Psaki said in a statement.

As that looming threat faces Americans, ABC News’ Trish Turner and Mariam Khan reported that Democrats on Capitol Hill are preparing to take action to extend the eviction moratorium until the end of this calendar year. As of Thursday, House Democratic leadership was working on gathering support to vote on an extension as soon as Friday. Still, that goal faces a significant hurdle given that the House recesses Friday for six weeks.

Amid a packed legislative schedule, the expedited process is likely to face pushback from across the aisle, with some Republicans noting that their opposition to the moratorium stretches back to its installment under the previous administration.

A spokesperson for Sen. Pat Toomey said the Pennsylvania senator is in that camp, and is concerned about “unintended consequences” of extending the moratorium like “higher rents and fewer low to moderate income housing options overall.”

The TIP with Tina Yin

The Democratic primary in Ohio’s 11th Congressional District heats up this weekend as Sen. Bernie Sanders, I-Vt., travels to the Buckeye State to get out the vote for his former presidential campaign surrogate Nina Turner and House Majority Whip Jim Clyburn, D-S.C., and other Congressional Black Caucus members are there to stump for Shontel Brown.

The influx of national figures in an off-year only illustrates the tenor of the race which has been dubbed a proxy war between the Democratic establishment and progressive wing of the party. It will play out next Tuesday.

Turner previously served as a state senator and as co-chair of Sanders’ presidential campaign. She’s gained support from most of the House Progressive Caucus and has the potential to be a strong progressive voice in the House. Brown serves as the chairwoman of the Cuyahoga County Democratic Party and has been endorsed by prominent figures across the more moderate Democratic establishment.

Ohio’s 11th is considered a safe Democratic district and the winner of this Democratic primary will likely secure the House seat in November, replacing Marcia Fudge, who is now serving as housing and urban affairs secretary. While the election has attracted national attention, former Ohio Gov. Bob Taft described it to ABC News as “more of a local race with very strong national consequences.”

In the House, where margins for the Democratic majority are incredibly slim, progressives are hoping for one more to join their number.

ABC News’ “Start Here” podcast. Friday morning’s episode features one of the millions of renters who could face eviction if the federal moratorium ends this weekend. Then, ABC News’ Conor Finnegan checks in on the status of Afghan translators trying to find a safe haven as US troop withdrawal continues. And, ABC News Senior Investigative Reporter Aaron Katersky breaks down the case against Nikola founder Trevor Milton. http://apple.co/2HPocUL

FiveThirtyEight’s Politics Podcast. The number of COVID cases in the U.S. is surging, largely due to the delta variant. Earlier this summer there were 10-15,000 reported cases per day, but that number is now up to 60,000 and rising. The federal government and some states have started taking measures to try to increase vaccination rates, particularly among public employees and health care workers. A recent Hill-Harris poll showed that a majority of voters would support the reinstatement of mask mandates if there were a local spike in cases, but overall Americans are split on what to do about the rise in COVID cases. In this installment of the FiveThirtyEight Politics podcast, the crew talks about where Americans stand on mitigation efforts, how politicians are responding, and what public health experts are saying about the current state of the pandemic. https://53eig.ht/3fc3zR7