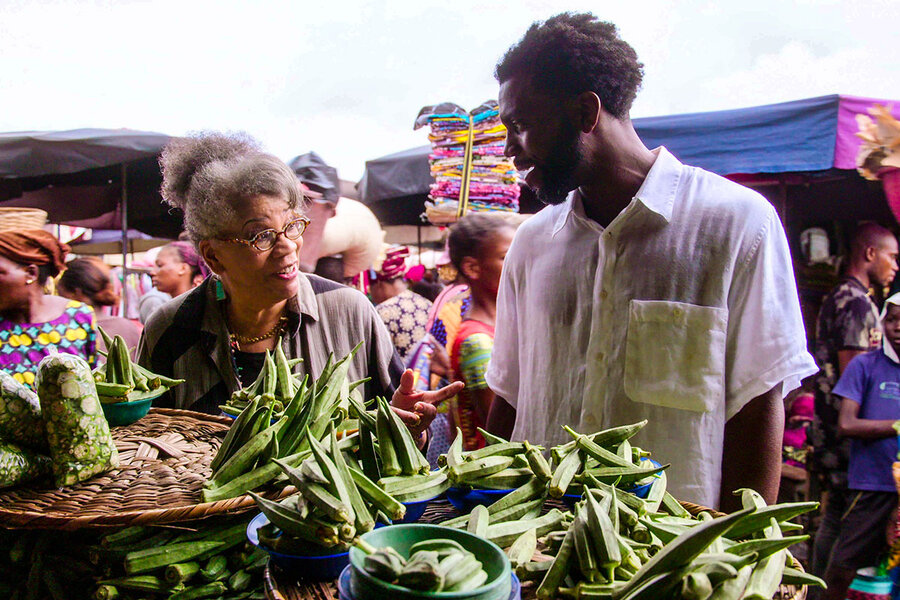 “High on the Hog” shows how African Americans not only created eats like macaroni and cheese and American barbecue, but were also instrumental in the popularization of okra, black-eyed peas, hibiscus, yams, peanuts, watermelon, oysters, and many other foods considered American staples, especially in the South.

“I believe food is a good way to connect to other people. And we need a lot of connection in the world today,” says Adrian Miller, a James Beard Award-winning author and certified barbecue judge, who was a consultant on the show.

The show does precisely that; it connects stories of people making a variety of food in the West African country of Benin, a stronghold for the transatlantic slave trade, to regions across the United States. Host Stephen Satterfield dissects everything from the food history of Gullah culture and cuisine to the Black families carrying on the traditions of America’s first caterers.

“When we talk about the African American influence on American cuisine, we’re talking about 400 years of history,” Mr. Miller remarks. “Southern food, soul food, Creole food, Gullah cuisine, low country food, we’re talking about the ingredients and techniques of Western Africa, Western Europe, and also the Americas all coming together several centuries ago. Because of the racial dynamic, enslaved Africans were often the cooks.”

The show leaves no cultural touchstones unturned, and viewers are coming away with lots to research. Mr. Miller says the show has inspired Black Americans to do their own investigations about their heritage. Books from various culinary authors, some nearly a decade old, are getting more attention since the series, he says. People are utilizing what they’re learning, and the show is sparking conversations.

“High on the Hog” viewer Christin Ivy, an actress at Tre Floyd Productions in Atlanta, watched the show with her partner. She says the series reinforced a lot of things she already knew and felt about Black history.

“A lot of the times the argument is African Americans don’t have a culture,” Ms. Ivy says. “But we do have a culture. It is woven into food. It is woven into every way of life. There are parts of it that have never been lost. I’m hoping we can continue as a people to just learn more about that part of ourselves. We have to remember who we are.”

But inevitably, in reckoning with African American history, Black people are faced with their own present-day struggles.

“For the last couple of decades, Southern food and barbecue have been very popular,” Mr. Miller explains. “But in terms of storytelling about these cuisines … when people of color did this cooking, it was just viewed as work. But [for] white people, it’s viewed as craft. And ‘craft’ can make a whole lot of money.”

In having an all-Black creative team, “High on the Hog” can depict Black culture and history with agency, as the makers of the series have the lived experience to tell the stories. This is increasingly important for many Black viewers who look to see African Americans both on and off the screen. Still, experts like Mr. Miller stress that America has a long way to go before generational woes are fully addressed.

For many Black viewers of the series, the more research they do about their history, the more it aligns with the present, Mr. Miller suggests. Some viewers wonder what to do after watching “High on the Hog” and being educated about the disregard that Black cuisine often faces. But the genesis of the series itself can provide insight.

Culinary historians have grown concerned that African American food will, quite literally, get swallowed up by Americans without the respect or acknowledgment that other cuisines are given. Some experts wonder if clearer definitions of Black cuisine are necessary for it to be respected.

“We need to begin to establish some regulations about what [African American cuisine] is,” says Dr. Jessica Harris, author of the book “High on the Hog,” which inspired the series. “When we talk about mac and cheese, does it have to have elbow pasta? Could it have pappardelle and still be mac and cheese?” she asks. “It’s like [Jamaican] jerk. People can call pretty much anything jerk because we’ve never really defined it. It’s steamed over pimento wood, which is now endangered in Jamaica, so they’re smoking it over logwood. But what does that mean if you’re doing it up here in a kitchen where you were not thinking about logwood or pimento wood? Is it still jerk?”

While defining centuries-old cultures seems like a massive undertaking, some viewers say the need is rooted in African American pride.

“Despite all the things that were thrown at our ancestors, we’re still here,” Mr. Miller says. No matter how much Black people have endured or will endure, “there is always a kernel. A nugget, a nubbin of joy in everything,” Dr. Harris affirms. That’s why it’s called soul food; it reflects something deeper, she says.

To experts and viewers alike, the show demonstrates the enduring resilience of African Americans and their ability to shine through periods of immense challenges.

“I felt really joyful,” Ms. Lamar says after having watched the series. “It made me feel better as a Black American woman, and not many things make me feel proud to be American. This show reminded me that to be American, you have to include the story of the Black Americans.”