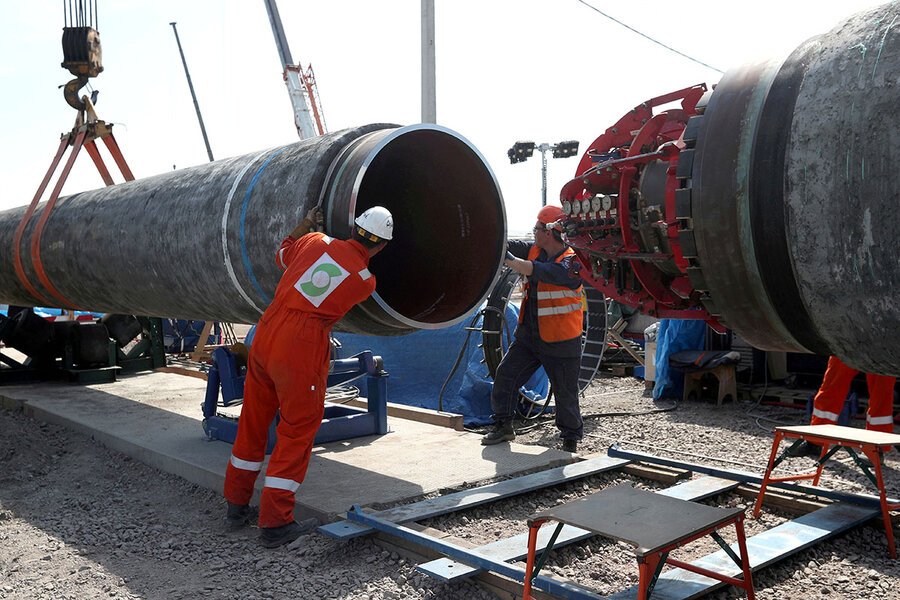 Something important, perhaps even portentous, has shifted in the geopolitical axis between Moscow, Ukraine, and the West.

U.S. President Joe Biden and outgoing German Chancellor Angela Merkel inked a statement last month that appears to greenlight the long-disputed Nord Stream 2 pipeline, which will deliver Russian gas directly to Germany, bypassing a Soviet-era pipeline through Ukraine. Depending on whom you speak with in Kyiv, this is an unexpected American stab in Ukraine’s back, one that seriously undermines the troubled nation’s national security. Or it just might be a blessing in disguise that will help to liberate Ukraine from its long-term dependence on Russian gas and transit fees.

In Moscow too, the mood is not nearly as triumphant as might be expected. For both countries, this episode saw leaders of the United States and Germany sit down and seal a critical geostrategic deal behind their backs. That delivers a harsh lesson: Germany, an old U.S. ally that was heavily invested in completion of the NS2 pipeline, looms much, much larger in Washington’s calculus than Russia or Ukraine.

A pipeline to deliver Russian gas to Germany is a geopolitical kaleidoscope, showing how the relationships among the U.S., Russia, Ukraine, and Western Europe are shifting in new ways.

“Moscow and Kyiv may tot up their wins and losses from this decision, but the fact is that it had nothing to do with them,” says Sergei Strokan, international affairs columnist with the Moscow daily Kommersant. “Joe Biden was seeking to undo the damage done to the transatlantic alliance by Donald Trump, and he took this lemon – a pipeline that Germany really wanted, which was already 90% complete – and he made lemonade by conceding it to the Germans.

“Some people in Ukraine may be very upset by this clear demonstration that Ukraine and its struggle with Russia isn’t the top priority on Washington’s agenda. Going by some of the noises coming out of Kyiv, that is a bitter pill to swallow, though it was a never realistic idea. By the same token, there is no big cause for satisfaction in Moscow. Yes, the pressure on NS2 is off, but it’s not because the U.S. has recognized Russian interests, or is likely to give in to them in future.”

The U.S. has always opposed the thirst of Germany and other Western European economies for Russian energy supplies. Back in the 1970s, Washington argued strenuously against the construction of the Druzhba (Friendship) pipeline across Ukraine and Poland to deliver Soviet energy supplies to Europe. That pipeline, now at the heart of the NS2 dispute, still carries Russian gas to Germany, yielding between $2 billion and $3 billion in annual transit fees for Ukraine – not an inconsiderable amount for an economy whose total gross domestic product was $154 billion in 2020.

But starting almost two decades ago, Russia began planning new routes that would bypass Ukraine, where political developments were taking what Moscow perceived as an anti-Russia turn, especially after the 2004 Orange Revolution. Work on the Nord Stream 1 pipeline, designed to carry Russian gas directly to Germany under the Baltic Sea, began in 2005. It was completed in 2011, but not before several “gas wars” erupted between Moscow and Kyiv, threatening shivering downstream consumers with shutdowns, and badly damaging Russia’s reputation as a reliable energy supplier. Major planning for Nord Stream 2, which has enough capacity to allow Russian gas exporters to avoid using Ukraine’s pipeline network, began in earnest in 2015, following Ukraine’s pro-Western Maidan Revolution.

“It was the desire of [the Russian state gas monopoly] Gazprom to reduce transit through Ukraine,” says Mikhail Krutikhin, a partner in the Moscow-based oil and gas consultancy RusEnergy. “They now have more than enough options to supply Germany directly and make the Ukrainian pipeline redundant. … Politically, Russia gains a lot. It no longer needs to depend on Ukraine, and Europe is divided over the issue. That suits Moscow fine.”

The heated response from Kyiv, experts say, is not so much about the economic losses involved with sidelining the vast Soviet-era pipeline network they inherited – though those losses are substantial – as it is about about the feeling that Ukraine and its struggle have been downgraded amid geopolitical horse-trading between U.S. and German leaders.

Ukrainian President Volodymyr Zelenskyy, who is due to meet with Mr. Biden later this month for what Ukrainian media predicts will be “heated” talks, has made no effort to conceal his “surprise” and “disappointment” over the U.S.-German pipeline deal.

“The termination of [gas] transit is not so much a blow to the economy, but a blow to [Ukrainian] political elites. That’s why we are witnessing this neurotic response of the authorities instead of a pragmatic search for ways to compensate for the losses,” says Kyiv-based economist Aleksey Kushch. The end of gas transit will inevitably boost prices for customers and industries, many of which are already outdated and inefficient.

“For the economy, it would mean the loss of competitiveness,” he says.

A loss of revenue?

Since 2014 Ukraine has taken the lead in sanctioning Russia for its annexation of Crimea and active involvement in east Ukrainian separatist revolts. Some of Ukraine’s most promising industries, including aviation and heavy engineering, which relied heavily on Russian markets, face bankruptcy after being denied access by Russia. But Ukraine’s leaders have been loath to let go of the vast network of pipelines and underground storage facilities that once carried 80 billion cubic meters of gas to Europe, or about 80% of all Russian gas exports to the EU.

Even today, under the current contract that lasts until 2024, Ukraine should handle 40 billion cubic meters of Russian gas annually, and receive at least $1.5 billion in transit fees from Gazprom – which is about 1% of Ukraine’s entire GDP.

The German-U.S. statement pledges aid to help Ukraine transfer to green energy sources and compensate for any losses. But it also promises to support the continuation of fee-generating Russian gas exports via Ukraine’s pipelines.

Yuri Vitrenko, head of Ukraine’s state-owned Naftogas energy company, worries that those promises may be too vague.

“We lack a complete understanding if they [Western powers] are ready to do what it takes to ensure that we still have transit through Ukraine because … we face an ongoing aggression from the Russian Federation, and we face ongoing use of gas as a geopolitical weapon,” he says.

“We should expect some dramatic decreases in the volumes going through Ukraine. … And, going forward, from 2025 when the current contract expires, we should expect no flows,” he says.

Some experts argue that Ukraine needs to get over its dependence on Russian gas and embrace more modern methods of providing power for Ukrainian homes and industries. Ukraine’s top officials “think that gas transit is almost Ukraine’s holy right,” says Kyiv-based analyst Dmitri Marunich. “The saddest part is that these policies are counterproductive for the Ukrainian customers.”

Few experts in Moscow or Kyiv expect the deeply entrenched hostility between the two countries to abate, even if both have had to realize that their concerns do not top the agenda of policymakers in leading Western countries.

Last month Vladimir Putin penned a 5,000 word article about the “historical unity” between Russia and Ukraine that labeled the current Ukrainian government as an “anti-Russia project” controlled from Washington.

“We can disregard the long historical analysis in Putin’s article. He is not a historian,” says Fyodor Lukyanov, a leading Russian foreign policy analyst. “But the message in the final section is pretty clear. If Ukraine continues with this anti-Russia project, Putin suggests, it will be terribly disappointed” by how things will turn out.

In Ukraine, the mood of hostility toward Russia is only likely to grow as a result of the NS2 decision, says Vadim Karasyov, head of the Kyiv-based Institute for Global Strategies.

“Our authorities are publicly shouting that they have been betrayed” over NS2 by the West, he says. “But in fact this plays right into their hands. It gives them more leeway domestically, to ignore U.S. criticisms about the lack of reforms, and to chart their own policies. There is a sense that the West will continue to support Ukraine in any case.”

A heat wave blazes across southern Europe. How are people coping?

A European getaway or office work? ‘Workcations’ bring both.