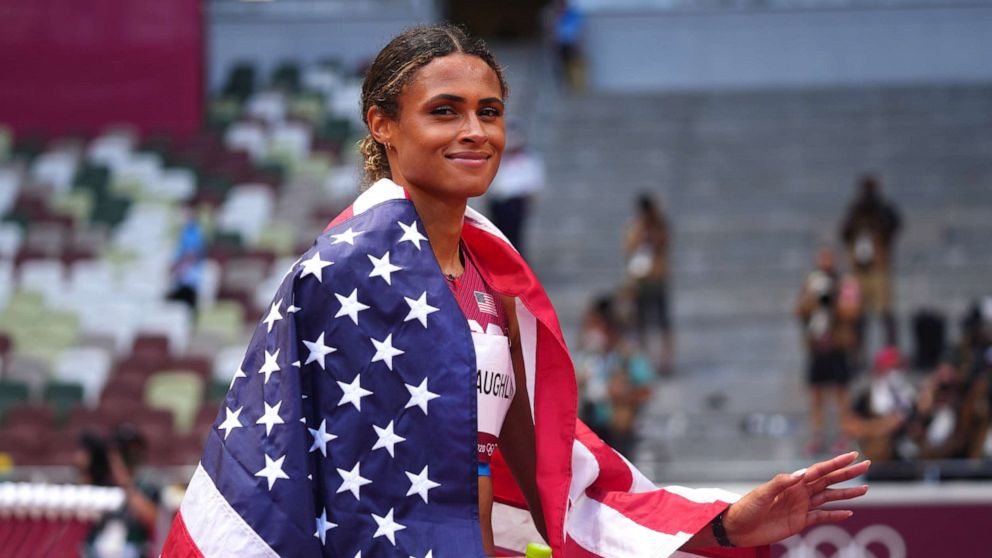 Each day, ABC News will give you a roundup of key Olympic moments from the day’s events in Tokyo, happening 13 hours ahead of U.S. Eastern Time. After a 12-month delay, the unprecedented 2020 Summer Olympics is taking place without fans or spectators and under a state of emergency due to the coronavirus pandemic.

Team USA’s Sydney McLaughlin set a new world record of 51.46 seconds for the 400m hurdles and picked up the gold medal along the way. She was congratulated by teammate Dalilah Muhammad who won the silver in the event.

The United States women’s basketball team has now won 53 straight games at the Olympics, a streak extending from the 1992 Olympic Games. Team USA defeated Australia 79-55 in an effort led by Breanna Stewart with 23 points.

The U.S. baseball team beat the Dominican Republic 3-1 to stay in the hunt for gold. Triston Casas hit his third home run of the Olympic Games and Team USA will play the loser of Japan-South Korea next on Thursday.

There were 28 newly confirmed cases of COVID-19 at the Tokyo Olympics on Wednesday, including four athletes, three of whom were staying at the Olympic Village at the time of the positive test. The Greek artistic swimming team was hit the hardest and was ruled out after 5 of the 12 athletes or team officials tested positive. The total now stands at 327, according to data released by the Tokyo 2020 organizing committee.

The surrounding city of Tokyo reported 4,166 new cases on Wednesday, a seven-day average increase of 178.0%, according to data from the Tokyo metropolitan government.

U.S. sprinter Allyson Felix finished second in her heat and advanced to the finals of the women’s 400m, putting her one step closer to reaching a record 10 Olympic medals.

If Felix medals in the 400m, she would have the record for most medals of any female track and field athlete with 10. If she also wins a medal in the 4x400m relay, she would surpass legend Carl Lewis with the most track and field medals ever. The Tokyo Games are the fifth Olympics for the 35-year-old track star.

Tsimanouskaya said she was excluded from her events and hustled to an out-bound flight by her Belarusian Olympic committee after she criticized them on social media. The Associated Press reported that Belarusian Olympic officials hinted she would face punishment upon her return home.

Tsimanouskaya never boarded the Belarus-bound flight after she hailed airport police and was put under their protection at the Haneda airport.

U.S. wrestler Tamyra Mensah-Stock won the gold medal in the women’s freestyle 68kg competition yesterday, the first Black woman to ever win Olympic gold in wrestling. Mensah-Stock said she knows exactly what to do with the $37,500 prize she will receive for winning the gold.

“I wanted to give my mom $30,000 so she can get a food truck. It’s her dream,” Mensah-Stock said. “My mom’s getting her food truck! She can cook really, really, really well – barbecue.”

Medal-worthy hair at the Tokyo Games

Catch up on the best moments from the previous days’ events

We fought and never gave up; dedicate this medal to COVID warriors: Skipper Manpreet

Bohemians secure stunning win over PAOK at the Aviva