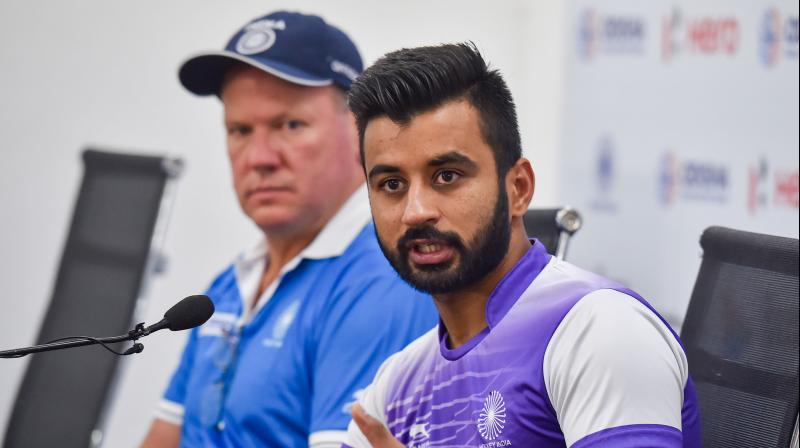 Tokyo: The Indian men's hockey team's Australian coach Graham Reid on Thursday said he feels "privileged" to be a part of the game's revival in India after the side clinched its first Olympic medal in 41 years, crediting togetherness and a team first mentality for the triumph.

India beat Germany 5-4 in the bronze play-off this morning.

The 57-year-old, who was a part of Australia's silver-winning team in the 1992 Barcelona Games, took over as India coach in 2019 and has obsessively talked about pursuing a process and investing in youth to get the results at a big stage like the Olympics.

"It is a fantastic feeling, it has come after a lot of sacrifices that the whole group has made," Reid said referring to the time the players spent away from their families and in some cases, battling COVID-19 as well.

"It takes a long time to get where these athletes have gotten. All the sacrifices that go unseen," he added with skipper Manpreet Singh sitting by his side after the 5-4 triumph over Germany here.

"…I know that apart from the country, this group has been waiting for a medal for a fairly long time and I know how much hockey means to India and I am privileged to help play a part in that. It means a lot after being in quarantine for for the last eight out of 16 months "

India were 1-3 down in the match and Reid said one of the things that has been worked on during his stint was to never lose hope of a comeback.

"(It is) never over until it is over. It's always easy to say you should be doing this or that but there are lots of things that go on," he added when asked about the penalty corner that India conceded just six seconds from the final hooter.

"It has been one of the signatures of this team, which we have tried to develop and make sure that we can always come back and I think we did that."

The coach said India were slow to get off the blocks and were in a bit of a sleep mode in the first quarter.

"It was a fantastic performance apart from the first 7-8 minutes. We were on a sleep mode a bit and we paid the price. But in the next three quarters we were switched on and showed a great fightback."

Reid feels the "team first" and "togetherness" mentality which he tried to inculcate worked wonders here.

"We dared to dream. The team first mentality and not feeling sorry about yourself worked. The players did a great job of doing this together especially in leaving the semifinal loss behind and focus on the bronze medal match," he said.

The coach said it is just the beginning and this team has many more milestones to achieve in the future.

"The ability to execute under pressure makes a best team. We haven't seen the best of this team yet, you guys need to achieve further."

He reiterated the mental toughness of this group of players had a big role to play in their success here.

"The mental resilience of this group of players has increased in the last 15-16 months. Don't underestimate what this team went through under duress."

Reid was effusive in his praise for veteran custodian P R Sreejesh, who stood like a wall in the face of unrelenting German attacks.

"Having someone like Sreejesh in the goal is nice, glad that we didn't have to go into a shootout. He is a stalwart of Indian hockey. He has done a lot of work in the background to get to where he is," he said.

The seasoned coach also lauded the efforts made by the sports ministry and the Sports of Authority of India.

"The funding is there, it is just a matter of keeping these things going. It used to be the national game. All involved with hockey want to see it back," he said.

"We worked on our mentality, I told them we can change the future and we did that today," he added.

We fought and never gave up; dedicate this medal to COVID warriors: Skipper Manpreet