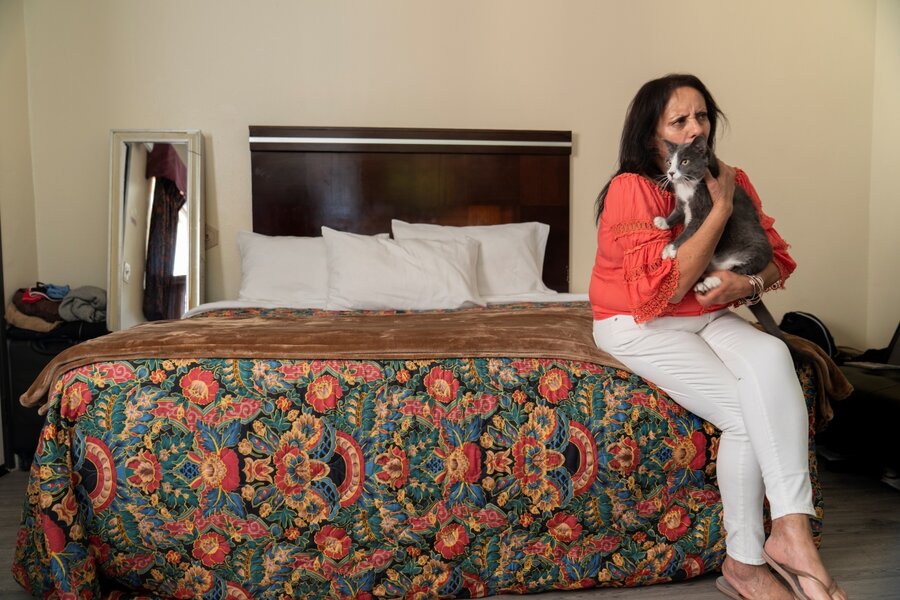 When homeless outreach workers first visited her encampment under a Los Angeles highway overpass last fall, Veronica Perez was skeptical of their offer of not just a bed, but a furnished apartment complete with meals, counseling, and the promise of some stability in her life.

“They said they had housing for me, but it just didn’t seem real,” Ms. Perez said. “When you’re homeless, you become leery and you don’t trust people.”

Ms. Perez had been sleeping in cars or tents all over Southern California since she lost her job at a storage facility three years ago and couldn’t pay her rent.

The second time the outreach team came to the camp beneath Interstate 405, Ms. Perez decided she was ready to take a chance and make a change.

She accepted the offer and took residence in one of 6,000 new units built statewide over the past year as part of Project Homekey. The program started in June 2020 is repurposing vacant hotels, motels, and other unused properties as permanent supportive housing.

Homekey is the lynchpin of Gov. Gavin Newsom’s $12 billion plan to combat homelessness in the nation’s most populous state. California has an estimated 161,000 unhoused people, more than a quarter of the nationwide total of 580,000, according to the the U.S. Department of Housing and Urban Development. Mr. Newsom signed the funding bill July 19, calling it the “largest single investment in providing support for the most vulnerable in American history.”

Mr. Newsom’s office said $800 million – most of it federal Coronavirus Aid, Relief, and Economic Security Act money – was spent on Homekey in 2020 to provide shelter for 8,200 people. Now the administration plans to go even bigger: California will spend $5.8 billion of state and federal funds over two years to expand the program and create an estimated 42,000 housing units.

“If you think of last year as a proof of concept, you can think of this year as taking this strategy to scale and making it a centerpiece of California’s approach to housing the homeless,” said Jason Elliott, senior counselor to Mr. Newsom.

Mr. Newsom has made tackling homelessness one of his top priorities. Now that the governor faces a recall election, Republican candidates have released their own plans to combat the crisis. John Cox wants to require unhoused people to receive any needed treatment for addiction or mental illness before they can get housing. Kevin Faulconer wants to build more shelters to make it easier to clear encampments.

Other states are also grappling with the escalating crisis. This summer New York City instituted an aggressive campaign to remove encampments from Manhattan, and Mayor Bill de Blasio plans to transfer over 8,000 people from hotels where they were placed at the start of the pandemic into shelters.

And in Washington state, Seattle residents will vote on a measure that would force the mayor to take steps to combat the problem, including creating 2,000 shelter or housing spaces within a year.

In California, Homekey is an outgrowth of Project Roomkey, a temporary effort during the coronavirus outbreak to find shelter at hotels, which Mr. Elliot said provided beds for 42,000 homeless people 65 and older or others susceptible to COVID-19. It has been extended through June 2022.

Under Homekey, the state buys the properties, covers all construction and conversion costs, then hands them over to cities or counties that contract with local service providers.

The state’s effort should be applauded but amounts to a “drop in the bucket,” said Eve Garrow, analyst with the American Civil Liberties Union of Southern California.

“This is substantial, but it’s nowhere near enough to meet the needs of all the people currently displaced from housing,” she said.

A Homekey site at a hotel in the small Silicon Valley city of Milpitas met with some local opposition, prompting a lawsuit accusing officials of pushing the project through without public hearings.

“We’re saying, you need to ask us permission before you spend our taxpayers’ money and build in our city,” said Suraj Viswanathan, a member of the group Voices Of Milipitas. The litigation was settled, with the group securing regular security patrols in the hotel’s neighborhood and twice-yearly meetings.

The former hotel that Ms. Perez now calls home is run by the nonprofit The People Concern, which operates three properties in LA County with a total of 162 units. All three are approaching capacity.

CEO John Maceri said the state has set up local governments for success, but it will take a combined effort of politicians and service providers to sustain the program. He estimates conversion costs will be far less than $550,000 per unit, the going rate for building from the ground up. It’s also much faster than building new units, and speed is important in a crisis.

“The goal should always be to provide permanent housing solutions faster and cheaper,” Mr. Maceri said.

At her new home in central Los Angeles, Ms. Perez relishes her privacy, enjoys the three meals provided daily and appreciates that she was allowed to bring her cat. She attends a weekly painting class.

“They told us, make yourself feel at home. And I do,” she said. Staff helped her apply for a new Social Security card and will assist her in finding a job when she’s ready.

Ms. Perez was diagnosed with PTSD from her years on the streets and receives on-site counseling. Others with more severe mental health problems or addictions also get the treatment they require.

The goal is to make sure even the “hardest-to-house” people will come inside, said Dr. Margot Kushel, director of the Center for Vulnerable Populations at the University of California, San Francisco. To that end, Ms. Kushel said Homekey gets the most important part right: providing permanent supportive housing, not temporary shelter.

“Some people need services that go along with that housing, and some people don’t. But the really essential thing is that without the housing, the services don’t work,” she said.

Eventually Ms. Perez will be presented with housing vouchers that will allow her to rent a subsidized apartment.

It’s unclear how long those vouchers might last, however, raising concerns from advocates about the long-term success in a state with exorbitant housing costs.

If California’s goals seem ambitious, Mr. Elliott said, that’s because they are: “Anything short of ending homelessness means we’re setting our sights too low.”