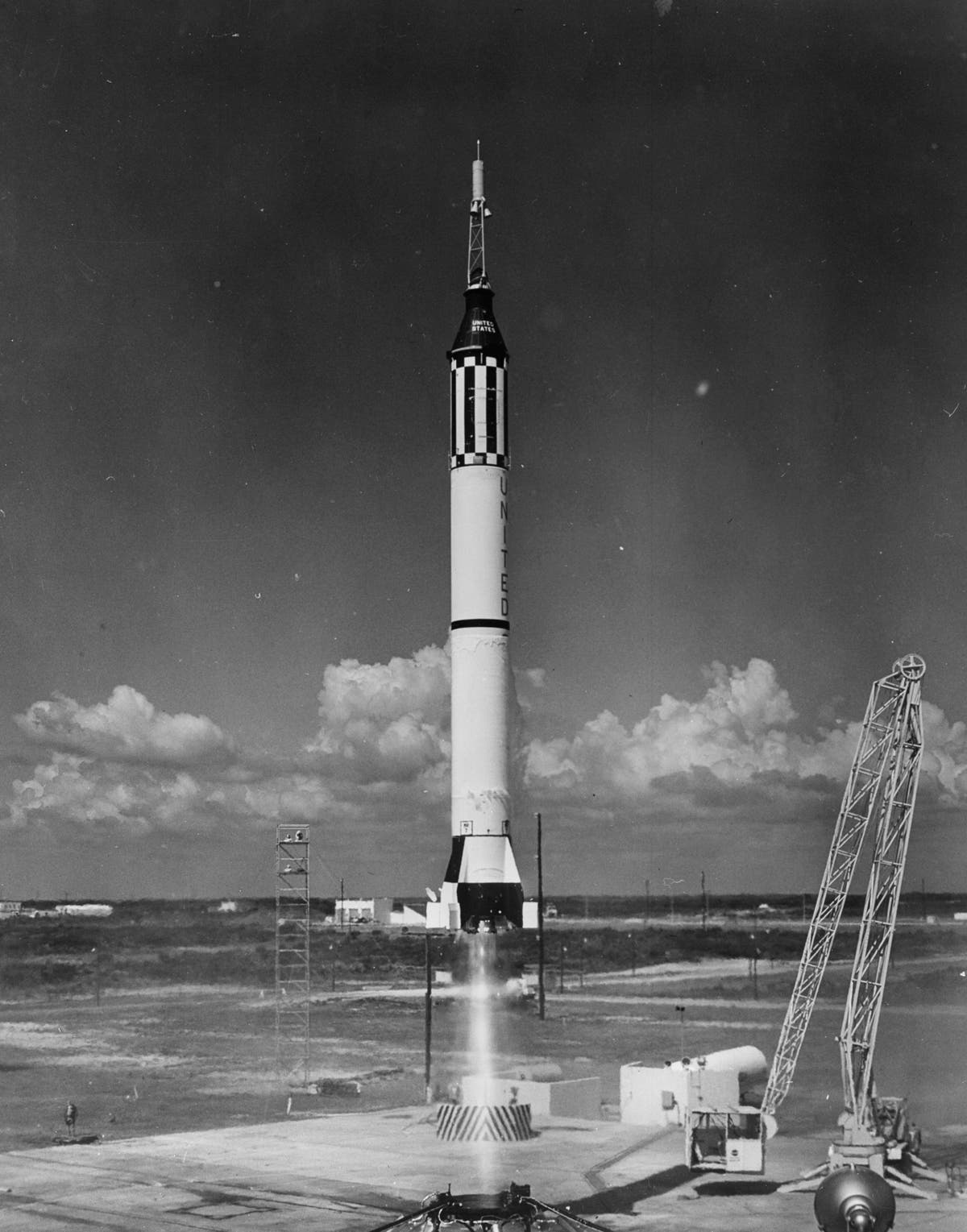 When Alan Shepard became the first American to go into space more than 60 years ago, he did so sitting on top of a modified military ballistic missile, the Redstone Rocket.

The former naval aviator and test pilot took his place in history wearing the iconic Mercury spacesuit, which NASA had decided not to fit with a system to allow him to go to the toilet. With his flight only expected to last 15 minutes, the space agency did not factor in any delays, but Mr Shepard ended up waiting on the launch pad for four hours before leaving the planet and ended up having to go in his suit.

Inside that suit, Mr Shepard also carried a single dollar bill, with its unique serial number, which would be used by officials from the US National Aeronautic Association to certify that the astronaut loaded onto the rocket was the same one rescued from the Atlantic Ocean. This became the standard procedure on all US space flights and was used to verify every Mercury, Gemini, and Apollo space flight.

It is a far cry from the flights taken this month by billionaires Jeff Bezos and Richard Branson, which were live streamed around the world using multiple camera angles, both outside and inside the spacecraft.

And the founder of Blue Origin was so confident in the spacecraft that he and his three crew-mates wore just light flight suits inside the pressurised cabin as they soared away from Earth.

It is extremely rare for astronauts to not wear space suits for launch, as a backup to the failure of cabin pressure, but it was also the policy of Virgin Galactic’s crew, which wore Under Armor flight suits.

Mr Bezos, the world’s richest person, became the second billionaire this month to reach the edge of space on a vehicle built by their private space company.

The Amazon founder lifted off onboard Blue Origin’s New Shepard rocket a week after Richard Branson went into space on his company Virgin Galactic’s own spacecraft.

Both entrepreneurs’ space adventures have captured headlines around the world and been lauded as the future of space tourism.

But observers have also pointed out that the flights, with far more advanced technology available to engineers, still essentially achieved the same feat as Mr Shepard did when he became the first American in space in May 1961

Mr Bezo’s flight took place in a crew capsule mounted on top of the New Shepard booster, named in honour of Alan Shepard.

After take-of Mr Bezos and his three crew-mates, reached the edge of sub orbital space at an altitude of 62 miles above Earth.

“I’m reminded of Alan Shepard and his first Mercury flight that was a rocket booster and a capsule,” said CBS News senior space analyst Bill Harwood.

“This is the same philosophy, and just like that original Mercury flight, they have an abort system, so they can get away from the rocket if there is a malfunction,” Mr Harwood said.

“Jeff Bezos and his Blue Origin folks, they were able to piggyback on over 40 years of NASA work,” he told Yahoo Finance.

“They did today what Alan Shepard… did in 1961, but they did it more efficiently in a way cooler fashion based on the leaps in technology.”

And social media users were quick to remind people of Mr Shepard’s achievements six decades ago.

“I don’t lose much sleep over billionaire space ego trips. The end result is advances in commercial space flight. But all of this is a reminder of just how miraculous the ventures into space in the 1960s, with comparatively primitive technology, really were,” tweeted Josh Marshall of Talking Points Memo.

I don't lose much sleep over billionaire space ego trips. The end result is advances in commercial space flight. But all of this is a reminder of just how miraculous the ventures into space in the 1960s, with comparatively primitive technology, really were.

“Private space flight is a good thing that will only get better. But let’s not get carried away with the Branson and Bezos flights. They barely touched the edge of space and turned around. Astronaut Alan Shepard, the 1st American in space, did the same thing in May, 1961!” tweeted former Wall Street Journal editor Walt Mossberg,

And Senator Elizabeth Warren was also quick to take a shot at the Amazon founder.

“It’s time for Jeff Bezos to take care of business right here on Earth and pay his fair share in taxes,” she tweeted.

It's time for Jeff Bezos to take care of business right here on Earth and pay his fair share in taxes.

Mr Shepard was beaten into space by Russian Yuri Gagarin, who became the first man in space in April 1961, after the US delayed its own launch on several occasions.

On 5 May 1961, Shepard piloted the Mercury Spacecraft 7, which he named Freedom 7, on a suborbital flight that  lasted for 15 minutes and reached an altitude of 101.2 miles before splashing down in the Atlantic.

Mr Bezos and his crew were onboard their own flight for around 11 minutes, and enjoyed three minutes of weightlessness, and successfully reached the mark internationally recognized as space.

After reaching this high point, the capsule successfully and safely returned to Earth using parachutes.

The Amazon founder’s flight traveled around 69,000ft higher than Mr Branson’s, which still went above the 50-mile altitude recognized by NASA and the Federal Aviation Administration.

Jeanne Gerulskis, the executive director of the McAuliffe-Shepard Discovery Center in Concord, New Hampshire, said NMr Shepard would be honored to have his name linked to the flight.