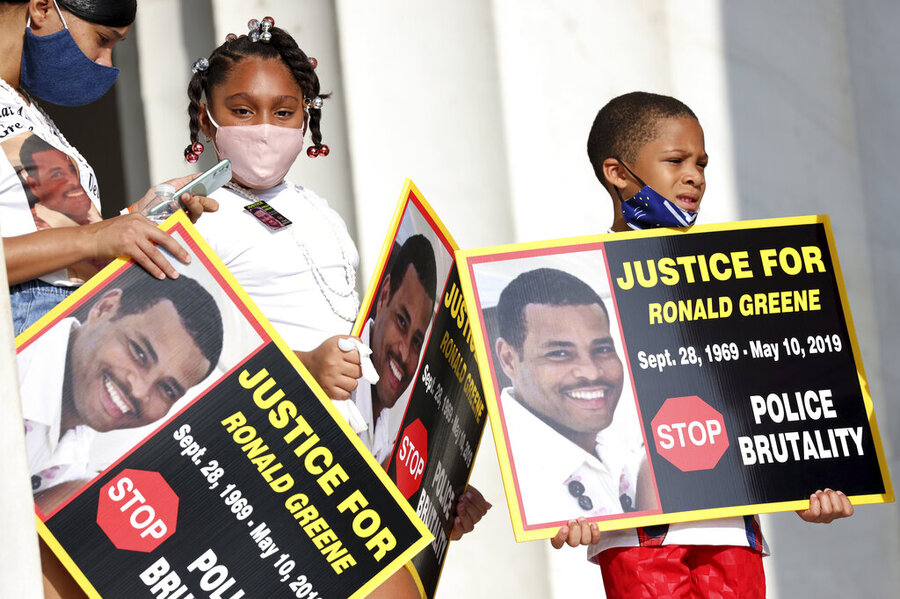 It marks a significant expansion of the federal inquiry that began as a blow-by-blow examination of the troopers’ violence against Mr. Greene and their apparent efforts to cover it up. Investigators are now moving up the chain of command, probing allegations that supervisors disregarded the video evidence, quashed a recommendation to arrest one of the troopers, and recently pressed a state prosecutor not to bring any charges, according to documents obtained by The Associated Press and a half dozen people familiar with the case.

“Their investigation is far beyond just use of force,” said Ron Haley, an attorney for Mr. Greene’s family, who met with federal authorities at length last month. “They’re casting a very wide net.”

The development comes as federal prosecutors are preparing to present their findings to a grand jury by the end of the summer, which could bring the first charges of any kind in a case that’s long been shrouded in secrecy.

Mr. Greene’s deadly arrest on May 10, 2019, came after he eluded a stop for a traffic violation and led troopers on a chase near Monroe at speeds topping 115 mph. Troopers initially told Mr. Greene’s relatives the 49-year-old died from a crash at the end of the chase, despite his car showing little damage, and only later did state police acknowledge a struggle.

It took 474 days for state police to launch an internal inquiry and officials from Gov. John Bel Edwards on down refused to release body camera video for more than two years. That was until the AP obtained and published it in May, showing white troopers beating Mr. Greene and dragging him by his ankle shackles, even as he pleaded for mercy and wailed, “I’m your brother! I’m scared! I’m scared!”

A key point under scrutiny in the federal investigation came just a day after the AP published the video, when the head of the state police, Col. Lamar Davis, and his chief of staff, Lt. Col. Doug Cain, made a hastily arranged attempt to dissuade state prosecutors from charging troopers in the Greene case, according to several people familiar with the investigation who spoke on condition of anonymity because they weren’t authorized to discuss it.

Mr. Davis and Mr. Cain traveled to District Attorney John Belton’s office in Ruston – more than 200 miles north of Baton Rouge – on May 20 to review the video frame by frame and make the case that the troopers’ actions were justified. Mr. Belton, who told colleagues he was deeply disturbed by the footage, referred the case to federal authorities in September 2019 but has not ruled out prosecuting the troopers at the state level.

Capt. Nick Manale, a state police spokesman, said the agency is continuing to cooperate with the federal investigation and “intends to release all documents and investigative files at the appropriate time.” He said the federal inquiry “prevents the release of further information.”

“Why would the top command people be so adamant on protecting their officers when it’s apparent that the officers didn’t do everything right?” said Andrew Scott, a former Boca Raton, Florida, police chief who testifies as an expert witness in use-of-force cases. “There’s a culture and a custom and practice that this type of behavior is condoned or winked at by command staff and has been allowed to perpetuate itself over the course of many years.”

Of particular interest to federal investigators is why the state police failed to arrest Chris Hollingsworth, a veteran trooper who can be seen on the video stunning Mr. Greene and was later recorded boasting to a colleague that he choked Mr. Greene and beat the “ever-living f–– out of him.”

Seven days after Mr. Greene’s death, on May 17, 2019, state police detectives told their superiors that Mr. Hollingsworth should be arrested for turning off his dashboard and body cameras before the high-speed pursuit and later when he realized one of the devices was recording him talking about beating Mr. Greene, according to notes written by the lead investigator, Det. Albert Paxton.

But state police commanders in Monroe pressured their detectives to hold off, the notes say. Among those present at the meeting were Capt. John Peters, the regional troop commander, and Bob Brown, then the major over statewide criminal investigations.

The meeting became “very heated,” the notes say, with the commanders warning that charging Mr. Hollingsworth would cause investigators to “have issues with patrol.”

The detectives also suggested Mr. Hollingsworth be charged with aggravated battery. Mr. Peters responded, “What is evidence, and who decides?”

Mr. Hollingsworth was never arrested and was only fired in September after he admitted to bashing Mr. Greene’s head with a flashlight – a use of deadly force internal investigators said was unjustified. The 46-year-old died in a single-car highway crash in Monroe hours after he learned of his firing.

Also under scrutiny, according to those familiar with the probe, is why the state police failed to provide the body camera video and even the most basic police reports for the official autopsy. It listed Mr. Greene’s cause of death as “cocaine induced agitated delirium complicated by motor vehicle collision, physical struggle, inflicted head injury, and restraint.” The forensic pathologists, however, say the lack of supporting materials left them unable to determine whether the crash or excessive police force caused his most severe injuries.

The FBI recently asked the pathologist to make another attempt at such a conclusion accounting for the evidence state police initially failed to provide.

As federal prosecutors home in on possible obstruction charges, state police leaders have redoubled their hunt for leaks in a case that’s steeped the agency in controversy and divided its ranks.

At least six high-ranking state police officials – including Mr. Peters, Mr. Brown, and Col. Kevin Reeves, the head of the state police at the time of Mr. Greene’s death have retired amid the growing fallout from the case.

Last month, Mr. Peters announced his departure as head of the Monroe-based Troop F – which has become notorious for its harsh treatment of Black suspects – with an email saying, “Shamefully, we have now seen there are those within our own ranks tearing this agency apart from the inside.”

Mr. Peters didn’t mention in his email that he recently received a 32-hour suspension for signing off on a use-of-force report without reviewing the body camera footage of his troopers beating yet another Black motorist, according to state police records. Mr. Peters, who was among the commanders to sign off on the use-of-force reports in Mr. Greene’s case, told investigators it was “common practice” for him to approve such documents without reviewing the materials. He declined to comment to AP.

Leading the federal inquiry is Assistant U.S. Attorney John Luke Walker, a Lafayette-based prosecutor who won accolades for his role in a sprawling child exploitation case that resulted in dozens of convictions.

Mr. Walker is also investigating Louisiana state troopers’ beatings of at least two other Black motorists. They include Aaron Larry Bowman, who was pulled over near his Monroe home just 20 days after Mr. Greene’s death and was struck 18 times with a flashlight, leaving him with a broken jaw, ribs, and wrist, and a gash to the head.

Trooper Jacob Brown, the son of Bob Brown, was arrested in December on second-degree battery and malfeasance charges in Mr. Bowman’s beating. Mr. Brown did not respond to requests for comment.

Mr. Bowman’s lawyer, Donecia Banks-Miley, said federal prosecutors met with her and her client in June and showed them Mr. Brown’s 2019 body camera footage for the first time.

California ramps up efforts to provide shelter for the unhoused