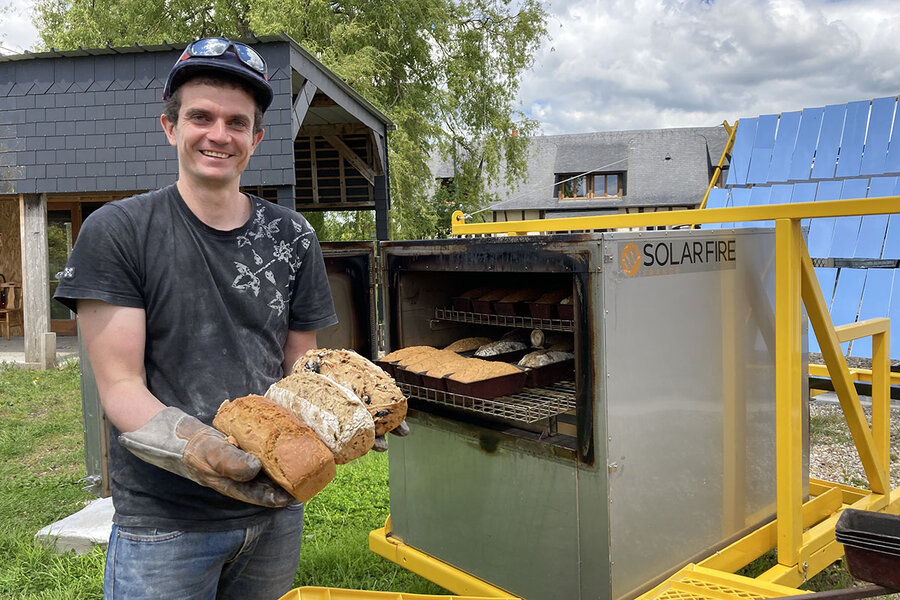 A collection of wispy clouds floats over Arnaud Crétot’s backyard, and in a flash, a blazing midmorning sun breaks through. For Montville, this 70-degree day is practically balmy.

Every Thursday, he takes a break from his small business NeoLoco, roasting local grains for snacks and aperitifs, to make bread using solar panels. For the next few hours, he will scuttle back and forth between the makeshift, cabinlike kitchen he’s built in his yard where he hand kneads gluey, grain-filled dough, to his wall of 57 concave mirrors.

Bread is an important cultural symbol in France. Some bakers are trying to apply innovative techniques to its production in ways that update the beloved tradition with modern ecological values.

At 10-minute intervals, the 5-square-meter contraption needs to be manually rotated ever so slightly into position, in order for the sun to properly fire up the outdoor oven connected to it. “Everything works like clockwork,” says Mr. Crétot. “It’s all timed out.”

By the end of the day – if the temperamental Normandy weather cooperates – he will have produced 40 loaves of sourdough-fermented, sun-baked bread. “It’s to the point where I have to refuse orders now,” says Mr. Crétot. “I hope more people can start using this method so we can have more of an impact.”

Mr. Crétot is part of a burgeoning group of “neo-bakers” around France who are working to incorporate local products and ecologically friendly, ancestral methods into making bread. For some bakers, it’s a question of choosing additive-free wheat or organic ingredients. For others, it’s about method – hand kneading dough or using sourdough fermentation in the place of yeast.

This small but dedicated baking troupe is doing more than finding innovative ways to produce bread. It’s creating renewed enthusiasm for an iconic cultural product that has seen its popularity fade in recent decades. It’s also challenging traditional mindsets on how a beloved and culturally ingrained food item – the French baguette – is conceived.

“Society is becoming more modern and we have to adapt, to constantly re-imagine and renew our products without abandoning traditions,” says Patrick Rambourg, a French historian and specialist in gastronomy. “The French aren’t against innovation. They like new things – but based on something they know and love already.”

Bread has outfitted French dinner tables since the Middle Ages. And although its origin remains speculative, most historians place its becoming central to French cuisine around the 19th century, when the long batonlike form replaced traditional round loaves.

Over time, it grew to be synonymous with French gastronomy, and this past March, France’s culture minister nominated the French baguette for UNESCO cultural heritage status. The institution will give its decision in late 2022.

But in recent decades, the role of bread has diminished, as French society has moved away from high-calorie diets, and the gluten-free movement has taken hold. The French consume around 120 grams (a quarter pound) of bread per day – just a third of what they ate in 1950, according to the data website Planetoscope.

And while around 10 billion baguettes are consumed each year in France, some 20,000 bakeries have closed since the 1970s. Shoppers are more likely than in previous decades to buy their bread at the supermarket, where it’s generally made on assembly lines instead of using artisanal methods.

“When you look at what the French are eating commonly as bread, it’s an awful product of really mediocre quality,” says Steven Kaplan, professor emeritus at Cornell University who has written 15 books on bread, trained as a baker in 1969, and lives in southern France. “The everyday, white baguette is an insipid, denatured bread – tasteless, not properly fermented, and full of additives.”

That’s created an opening for new techniques and ingredients for those hoping to revitalize this French staple. Among them is Paris baker Benoît Castel’s pioneering pain d’hier et de demain – “yesterday and tomorrow’s bread.” It’s the culmination of a year’s worth of meticulous work to find the right combination of ingredients and method to create a sourdough-based loaf using pieces of leftover, already-baked bread.

At the outset, Mr. Castel set off on this baking journey to fight food waste. France wastes approximately 10 million tons of food each year, equivalent to 3% of its gas emissions. The government has passed a handful of bills in the last decade to address the problem.

“I’m lucky to have grandparents who were farmers and it’s made me realize how much we take raw materials for granted,” says Mr. Castel. His pain d’hier et de demain is a hearty round loaf with a crusty outer layer and airy, light body, and lasts up to five days – as opposed to one day for a typical baguette.

“That means respecting the land as well as the hard work others put in to grow wheat, cocoa, etc. We throw away a lot of food before utilizing all the energy and resources it can offer us.”

“There’s room for all types”

Local initiatives in bread-making move in the same direction as trends in France’s agriculture sector. Over 10% of French farmers work with organic products and in 2018, around 7,000 farmers registered to convert to organic farming, according to national organic agricultural agency Agence Bio. Approximately 13% of French people eat organic products everyday, according to the same agency.

But neo-baking remains niche, and most baking schools continue to teach primarily based on dominant techniques. Thomas Teffri-Chambelland, who founded the International Bakery School in southern France in 2005, is hoping to shake up modern-day teaching. The school focuses entirely on using organic ingredients and offers the only high school-level diploma in Europe dedicated to organic and sourdough baking. Since its launch, 80% of graduates have opened their own bakeries, and none have closed since.

“Most of our students have recently changed careers and are looking for something more concrete and meaningful,” says Mr. Teffri-Chambelland. “Working with organic materials or sourdough isn’t just about being trendy. It’s raising awareness about the benefits they have for health, conservation, and the environment.”

Mr. Crétot in Montville is also working to impart his knowledge to others, in hopes they can make a similar impact. He learned about Solar Fire – the company that developed his solar oven – as well as the solar tech nonprofit Go Sol during a trip to India in 2014. He went on to work on developmental projects across Africa with them, teaching sustainable baking. Now, every month he gives training to those looking to learn more about his technique.

But while Mr. Crétot says he has a group of devoted clients – who pick up his bread from one of five sales points in the local area and have enthusiastically moved “to the other side” of regular white bread consumption – there are still a few die-hard traditionalists in his midst.

“One woman who often buys my bread said she tried to get her husband on board, but he really just wanted his ‘sponge,’ the ordinary baguette that he could dip in his morning coffee,” says Mr. Crétot, who plans to start delivering his bread to sales points by bike to further reduce his environmental impact. “There’s the idea that there’s just one type of bread. But there’s room for all types, for everyone.”

A heat wave blazes across southern Europe. How are people coping?