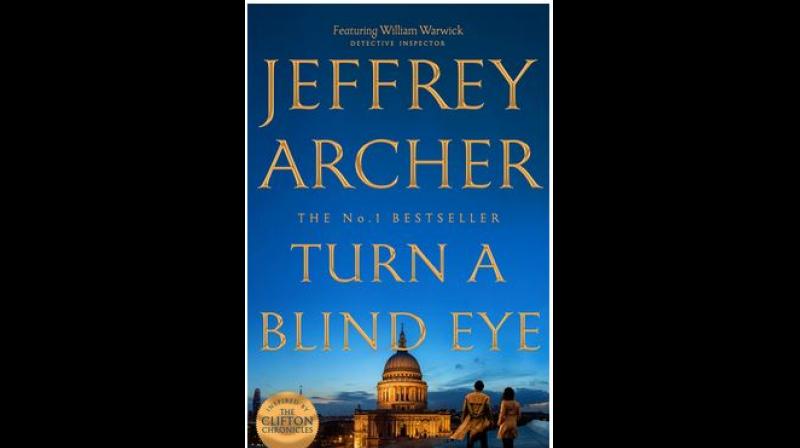 William Warwick, now a Detective Inspector, is tasked with a dangerous new line of work – to go undercover and expose crime of another kind: corruption at the heart of the Metropolitan Police Force.

Jeffrey Archer’s latest book Turn A Blind Eye, the third in the series featuring William Warwick, the detective whose character is a spin-off from The Clifton Chronicles, was launched digitally in India by the non-profit Prabha Khaitan Foundation.

Talking about his latest book, the author said, “Turn a Blind Eye is the third of my new William Warwick novels, telling the story of the life of William Warwick, a family man and a detective who must battle against a powerful criminal nemesis. At the same time, a notorious drug baron goes on trial with the prosecution case led by William’s father and sister. And William’s wife Beth, now a mother to twins, renews an old acquaintance who appears to have turned over a new leaf — or has she? As the undercover officers start to draw the threads together, William realises that the corruption may go deeper still, and his own career is at risk.”

The character graph of the protagonist William takes a different turn with each book. “I thought it would make a fascinating series to take a young policeman and follow his career, rising from constable on the beat to Commissioner of the Metropolitan Police. There will be eight books, covering eight different subjects (so far, art theft, drugs, murder, police corruption), while William holds eight different ranks in the Metropolitan Police. It brings in my own knowledge of art, politics, auctioneering and sport,” said Archer. “I suspect most authors write about what they know — certainly in the case of The Clifton Chronicles, my own experience as an author is reflected through Harry, and my wife’s experience as an Oxford and Cambridge Don, the chairman of a National Health hospital, and now chairman of the Science Museum is reflected on the pages. And my love of politics and the House of Lords can be clearly seen in Giles Barrington’s life, and indeed in many other of my books. So, in many ways the Clifton Chronicles is almost autobiographical,” Archer went on to say.
Talking about his initial days as a writer and his career as an author, Archer said “I fell in love with Richmal Crompton’s Just William series when I was a child, then with Ian Fleming and John Buchan as a teenager, then Shakespeare and Dickens. So, when I left politics in my early 30s, I decided to try and write a book myself. The result — Not a Penny More, Not a Penny Less.”

“While I enjoy setting myself new challenges — such as deciding at the age of 70 to write a seven-book series, The Clifton Chronicles — my passion for writing has never dimmed. I watch as much cricket as I can and I love auctioneering for charity — I still do around 15 a year. In fact, it was one of the big disappointments of last year that all my charity auctions had to be cancelled,” the author said, adding, “The pandemic has been tough for everyone — and is still proving hugely challenging for many around the world, especially the young.”
But he said he counts himself very lucky to be in a position to continue to do what he does — write. “While the UK was in lockdown, I was at my home in Cambridge, and completed two books, rather than just my usual one during a 14-month period,” he said. Asked what advice he would give budding writers, the maverick author promptly said “My main piece of advice to budding authors is to ‘read’, and then read some more — anything and everything, and include the classics.

A message for her prince