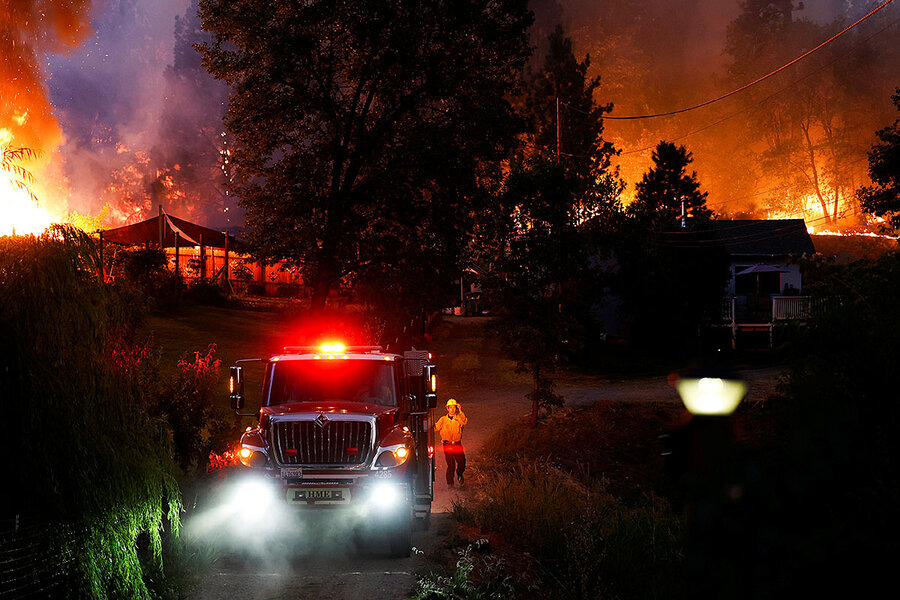 The acrid smoke from massive wildfires that ignited in rural eastern Washington last Labor Day weekend drifted over the Cascades before blanketing the state’s populous western flank. Ashen clouds darkened the skies above Seattle, Tacoma, and the capital, Olympia, looming like a rebuke of state lawmakers for failing to alleviate a worsening wildfire crisis.

The memory of that spectacle lingered after the haze cleared, and when the Legislature convened in January, a sense of urgency – and unity – prevailed in the statehouse. Republicans joined with Democrats to unanimously approve a wide-ranging wildfire prevention bill, resolving differences that had derailed similar measures the past two sessions.

The show of bipartisan support marked a victory for Hilary Franz, a Democrat and Washington’s commissioner of public lands. Since taking office in 2017, she has prodded lawmakers in both parties – Democrats control the House and Senate – to work together on wildfire legislation “before the Evergreen State turns charcoal black.”

At a time of intense partisanship in the U.S., Western state lawmakers are forging bipartisan legislation to address the region’s wildfire crisis.

As infernos ravage the West again this summer, adding to the vast destruction witnessed in recent years, Democrats and Republicans in several states have embraced collaboration on wildfire bills as they seek to save lives, land, and homes. At a time of national polarization, when pragmatism can seem a lost art, the towering flames in Oregon, California, Arizona, Colorado, and elsewhere have forged consensus among legislators to confront a perennial threat.

“Had last year’s fire season been average,” says state Rep. Larry Springer, the Democratic deputy majority leader, “there probably would have been less energy behind this bill. But the explosion of fire – it’s impossible for anyone to ignore.”

“Everybody has their take on what’s causing these fires. Our side says it’s forest management; the other side says it’s climate. But whatever the causes, we have a problem,” he says. “So let’s address it and do the best we can to prevent what’s happening.”

Oregonians endured their own Labor Day nightmare last year when a handful of infernos erupted that weekend on the western side of the Cascades. The fires scorched some 1 million acres – more than had burned in the mountain range in the previous 36 years combined.

One blaze swept through the state Senate district that Jeff Golden represents, destroying 2,800 homes and other buildings and gutting the small towns of Phoenix and Talent. The devastation prompted Senator Golden, a Democrat who lives in nearby Ashland, to introduce a $190 million omnibus wildfire bill in February to bolster fire response agencies, forest health, and community preparedness.

“After last year,” he says, “I didn’t see how we could face our constituents if we didn’t get something done this year.”

Seeking to gain bipartisan backing, Senator Golden, chairman of the Natural Resources and Wildfire Recovery Committee, agreed to compromise on a land use planning clause to win over wary Republicans. More than half the party’s caucus voted for the measure in June, and he considers that support vital for reinforcing the idea that reducing wildfire risk requires collective effort.

“Without Republicans getting behind it, the narrative could’ve quickly become that we’re the bad guys – the overreaching, nanny-state Democrats,” he says. He mentions the Bootleg Fire in southern Oregon, which started less than two weeks after the bill’s approval and has burned more than 400,000 acres. “These fires affect everyone, so we need everyone working to prevent them.”

The shared vulnerability of rural and urban residents has created an ideological bridge in the Capitol, says Sean Stevens, executive director of Oregon Wild, an environmental advocacy group. “The bipartisan nature of wildfire is interesting. No politician – Republican or Democrat – wants to tell constituents they can’t solve this problem for their communities,” he says.

A prolonged drought and rising temperatures in the West have contributed to an increase in the intensity and magnitude of fires over the past decade. Wildfires blackened 9.5 million acres across the region last year, including almost 700,000 in Colorado, the highest total in its recorded history.

Kevin Priola, a Republican state senator, recalls campaigning door to door in a Denver suburb in October. A charred pine needle dropped from the smoke-smeared sky and landed on the file folder he held in his hands. He surmised that gusty winds carried the needle 50 to 60 miles from a blaze burning in the Front Range foothills west of the city.

The moment illuminated the inescapable reach of wildfire, and he recounts the anecdote while explaining his support for a bill to create a state fund to help communities avert future disasters. He cast the lone Republican vote in favor of the measure that passed in June.

“As policymakers, we often get tagged as reactive – we change the law after the public changes its habits,” he says. “With this legislation, we’re looking ahead. There’s no time to wait.”

A growing focus on prevention

Federal and state firefighting agencies have followed an aggressive wildfire suppression strategy on public and private lands for more than a century. The policy of dousing most wildland fires as quickly as possible has wrought forests, grasslands, and shrublands choked with overgrowth and primed to burn as the climate turns warmer and drier.

The lopsided emphasis on suppression over prescribed burning and other preemptive treatments that could lower the wildfire threat has pushed state lawmakers to seek legislative remedies.

In New Mexico, a bill to ease restrictions on conducting controlled burns on private land received nearly unanimous support in March. A comparable measure appears headed for bipartisan approval in California a year after fires torched a record 4.2 million acres, including five of the six largest blazes in state history.

The spirit of cooperation has spread to Congress, where a group of Western lawmakers formed the Bipartisan Wildfire Caucus earlier this year. Two of its members – one Democrat, one Republican – have co-sponsored a $600 million bill to increase prescribed burning on public and private lands.

More broadly, the bipartisan infrastructure bill now wending its way through the House and Senate would pump billions of dollars into wildfire prevention and climate resilience programs. The funding would aid forest restoration through prescribed burning and “ecologically appropriate” timber harvesting, and provide “defense grants” to communities to prepare for and ward off the flames.

The state and federal initiatives reveal a growing inclination among elected officials to redress the spiraling effects of fire even as discussing the root causes remains thorny.

State lawmakers in Washington avoided an ideological fight over wildfire prevention by separating that bill from more contentious proposals that explicitly focused on climate. For Rep. Tom Dent, a Republican who represents a rural district that stretches across central and eastern Washington, the smoky skies in the West offer a clear view of the need to act.

“We can argue about climate change and what it means and where it’s going,” he says. “But right now, we have to deal with the wildfire epidemic.”

In New York politics, an end to the old boys’ club?