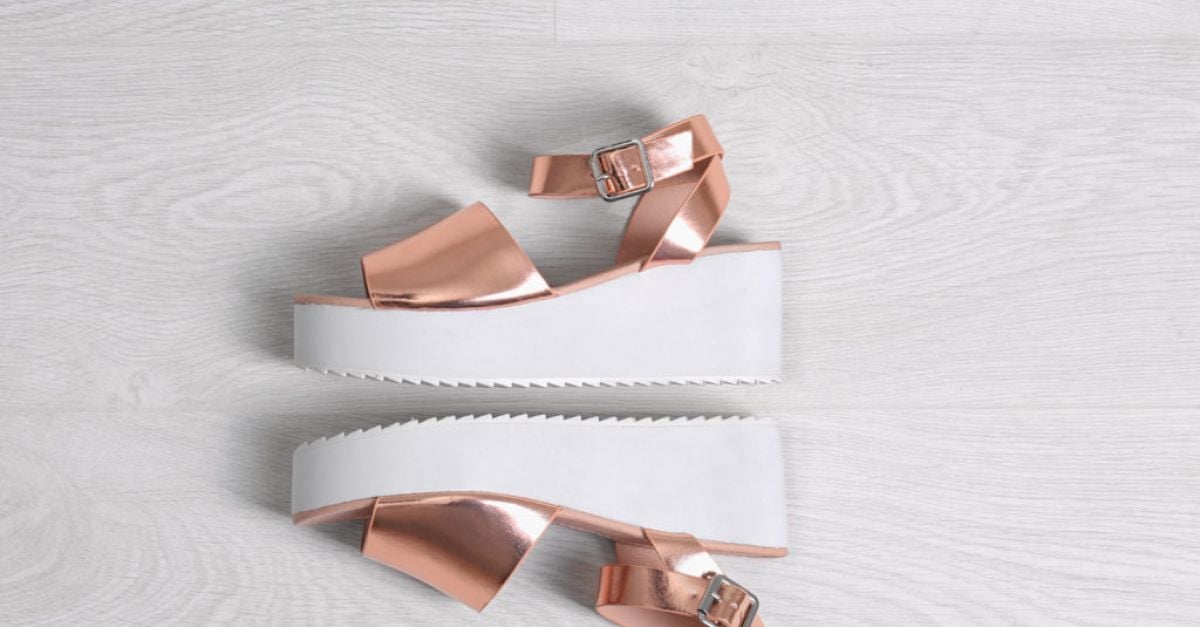 Once the pinnacle of Seventies disco fashion, platforms are everywhere again: they’re all designer Marc Jacobs can wear, and it seems like every Instagrammer has their own pair.

However, the storied history of platforms stretches back a whole lot longer than the 1970s. Platform shoes – meaning a raised sole – have been around for centuries…

One of the earlier iterations of platforms were pattens – wooden overshoes worn in the Middle Ages, fastened with leather straps. The elevated soles of pattens make them similar to the platforms of today, but its function was predominantly practical: to lift its wearer’s feet off the muddy ground.

This meant they were largely for the upper classes – as seen in Belgian painter Jan van Eyck’s Portrait Of Giovanni Arnolfini And His Wife. It depicts a wealthy couple with a pair of pattens visible in the bottom left corner. The National Gallery notes: “Every object has been carefully chosen to proclaim the couple’s wealth and social status without risking criticism for aping the aristocracy.”

Venetian ladies of the 16th century wore similar platforms, known as the chopine. Again, there was a functional element to these shoes – to keep feet and the bottom of expensive dresses off the mucky ground – but it also had a social purpose.

It is thought the higher the shoe, the more noble or wealthy its wearer was. Often the shoes were so tall they were difficult to walk in, meaning the noblewoman had to lean on her servants to walk down the street. The chopine – and indeed platforms in general – soon became associated with femininity and womanhood.

There have been iterations of platforms in all different cultures over the centuries – from the wooden okobo of geishas in Japan to the kabkabs of the Middle East.

The next major moment in platform history came in the 1930s, thanks to Salvatore Ferragamo. In 1938 the Italian shoemaker made The Rainbow sandal for Hollywood star Judy Garland – layers of cork gave this shoe its signature height, with multicoloured suede placed on top.

A modern version of The Rainbow is available to buy – if you have £1,465 to spare.

Other stars of the era had similar shoes, from Carmen Miranda to Marlene Dietrich.

Of all eras, platforms are most closely associated with the 1970s. After all, the disco era called for shoes you could dance in all night, not spindly stilettos.

Platforms were everywhere, from male rockstars – including David Bowie and Elton John – to more everyday partywear. With the height and drama, platforms made a statement – particularly when decorated with glitter, bright colours or loud patterns – very much in keeping with the OTT Seventies aesthetic.

Bringing it back in the Nineties…

High fashion got a hold of the style in the Nineties, pushing it to its extremes. Vivienne Westwood introduced her iconic Naomi Ghillie platforms in 1993 – famously worn by Naomi Campbell, who fell over in them halfway down the runway, managing to laugh it off gracefully.

The high street version wasn’t quite as extreme – anyone who was a teenager in the Nineties will remember lusting after the flatform sandals and platform boots worn by various members of the Spice Girls.

Fashion’s obsession ran well into the Noughties and 2010s, particularly when Alexander McQueen introduced his armadillo boots for his spring/summer 2010 collection. Hand-carved from wood, these iconic shoes not only had huge platform soles but also vertiginous heels, giving the impression the wearer was ‘en pointe’ like a ballerina. This summed up McQueen’s style – eerily beautiful with hints of the grotesque – and was often worn by experimental dresser Lady Gaga.

By the mid-2010s Stella McCartney swooped in with a more wearable style: lace-up flatforms, often embellished with stars – a trend the high street picked up with wild abandon.

From curtain bangs to roller-skating, it seems like everyone is obsessed with the Seventies right now – meaning disco-inspired platforms are back with a vengeance.

These styles are more wearable and funkier than we’ve seen in the Noughties and 2010s – worn by It girls such as Florence Pugh and Olivia Rodrigo and trendsetters including Marc Jacobs.

Every so often the platform will be given a modern update – we’re particularly thinking of Balenciaga’s controversial Crocs – but for now, fashion seems to be largely content with the nostalgia of Seventies glamour.

Putting life under the lens

A message for her prince