Join us on Google News to keep up to date with the latest news
Hello. This article will focus on the manufacture of a simple cooler based on cold accumulators (thermocouples). Such a device, unfortunately, cannot replace a full-fledged air conditioner, but it still helps to endure the summer heat better than using a conventional fan.
For the manufacture of the cooler, the following tools and materials were used:
– a six-liter capacity;
– an exhaust fan;
– an electric motor from a video recorder;
– a power connector 2.5X5.5mm,
– piece of rubber strip 80X180 mm;
– aluminum wire with a diameter of 4 mm;
– pliers;
– Screw M5 20mm 2pcs;
– nut M5 2pcs;
– knife (scissors);
– power adapter 12V 1A;
– cold accumulator (thermoelement FKhE-2) 2 pcs;
To begin with, a suitable fan was selected. In my case, this is an old exhaust fan. It has a fairly high throughput, besides, the fan axis is fixed on two rolling bearings, which is rarely found in computer fans of similar dimensions (by the way, its dimensions are approximately comparable to a computer fan of 80x80x25 standard size). 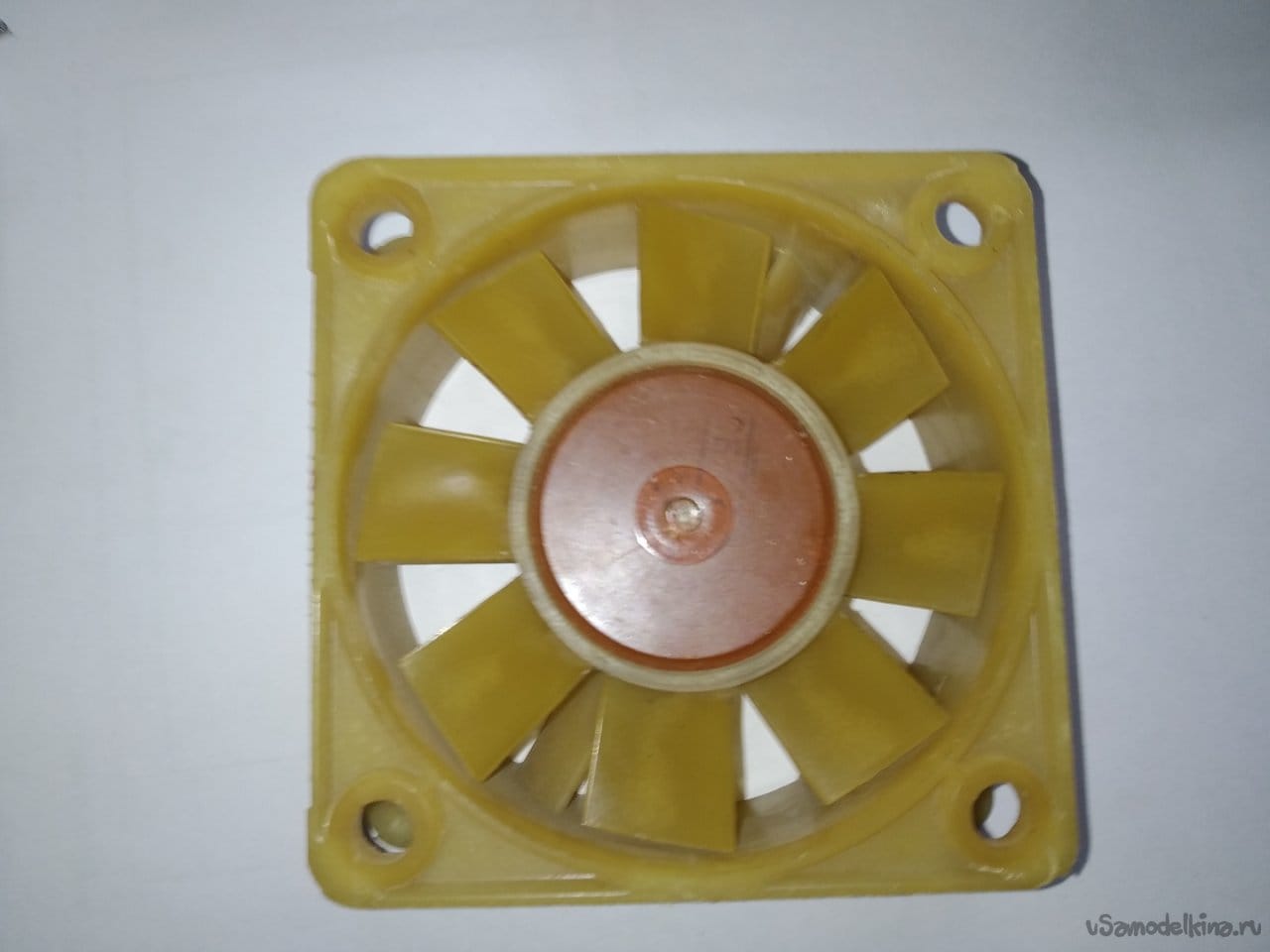 Unfortunately, my fan has a defective motor, it cannot be replaced as it is integrated into the device case, so I had to find a way to install an external electric motor. The choice fell on the motor from the VCR. It was necessary to solder the power connector to its contacts. 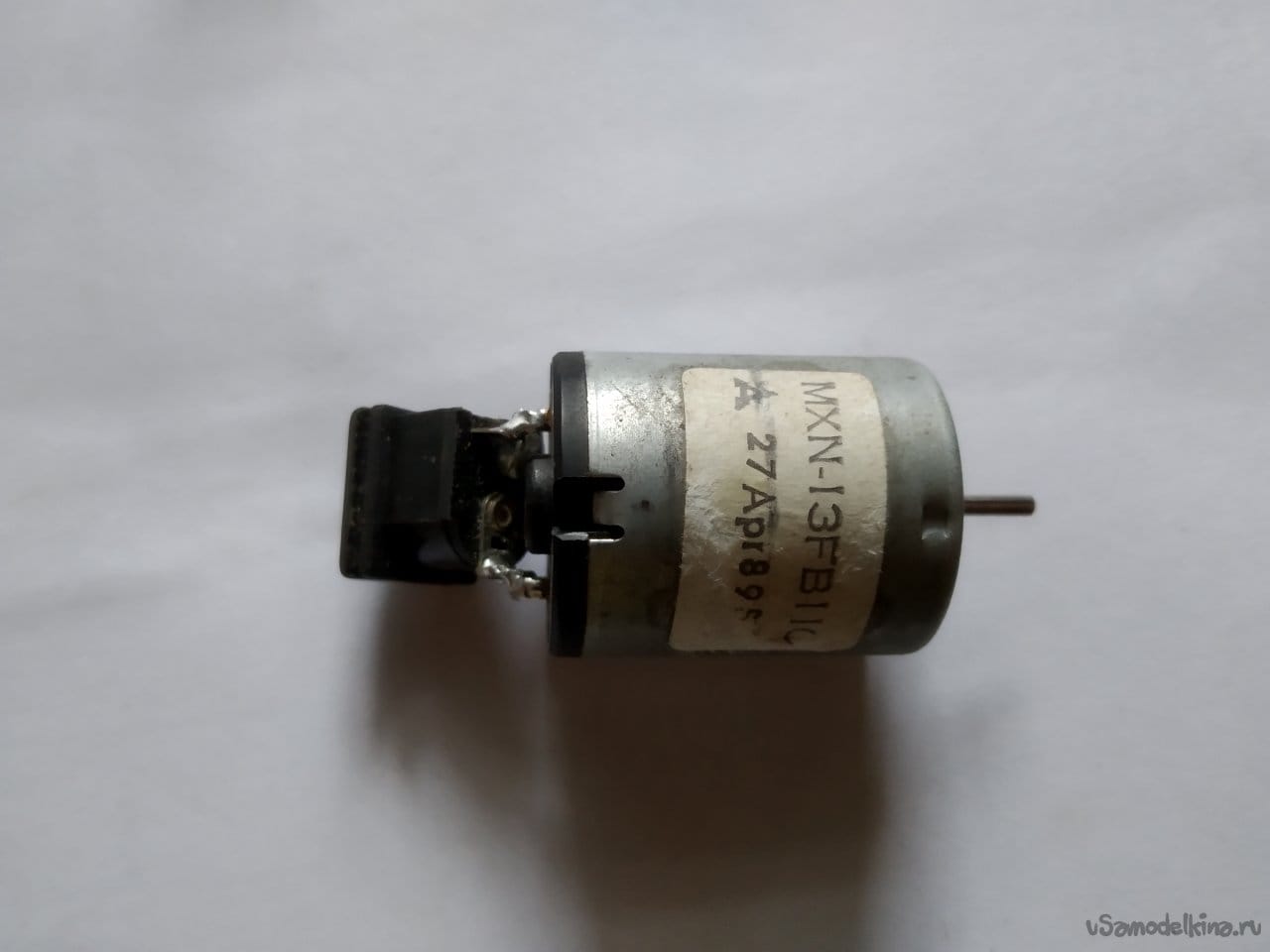 To connect the motor and the fan shaft, it was decided to use the pulley previously installed on this motor, the excess part was removed, and a hole equal to the diameter of the fan shaft was drilled in the remaining half of the length. 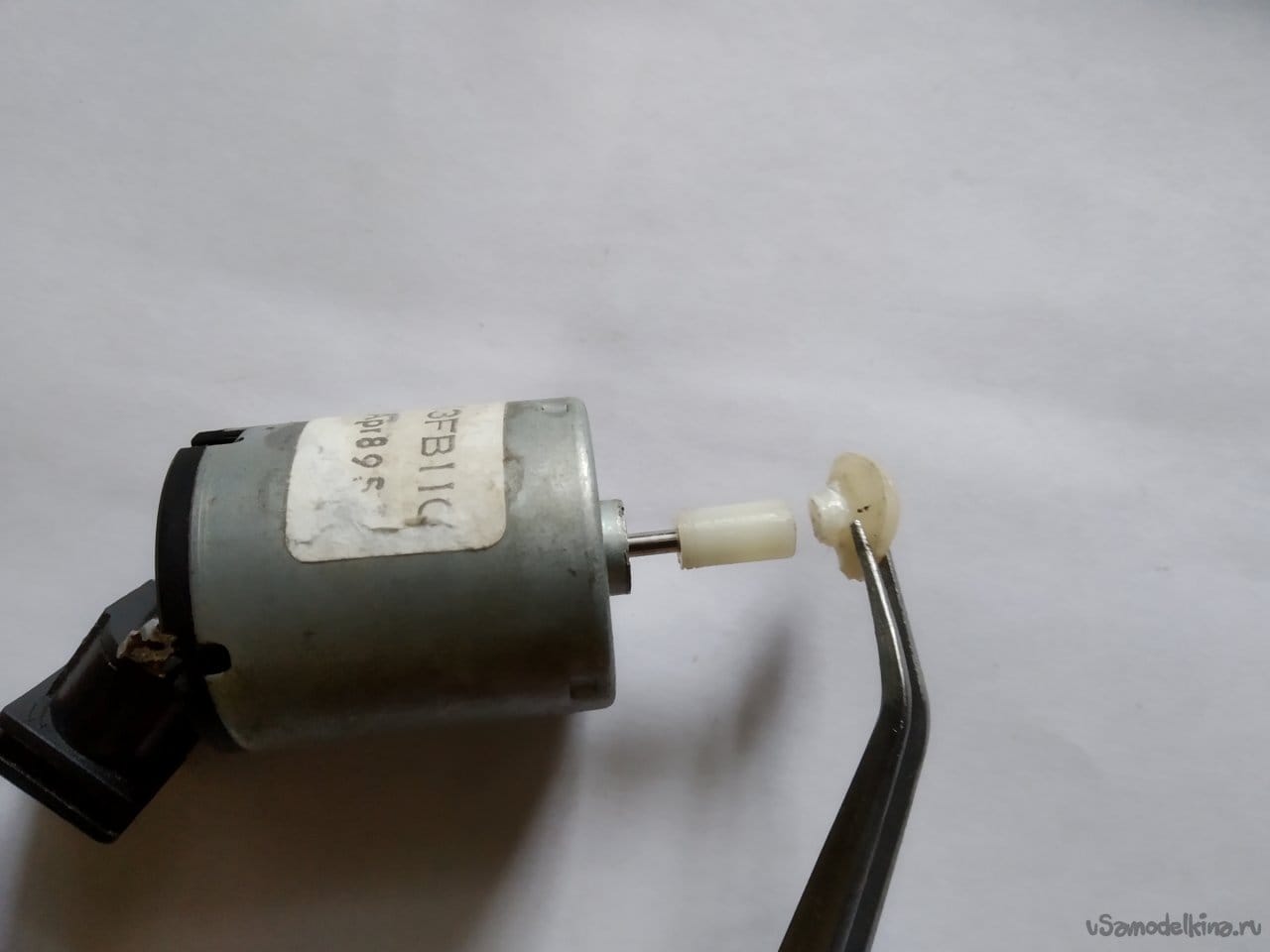 Now it remains to disassemble the fan and install an improvised adapter sleeve. To do this, it was necessary to remove the plug and unscrew the nut, its place was taken by the coupling. For fastening, no glue was needed, the metal shaft in the process of screwing on the coupling cut a thread inside the tube, which ensured sufficient reliability of the fastening. 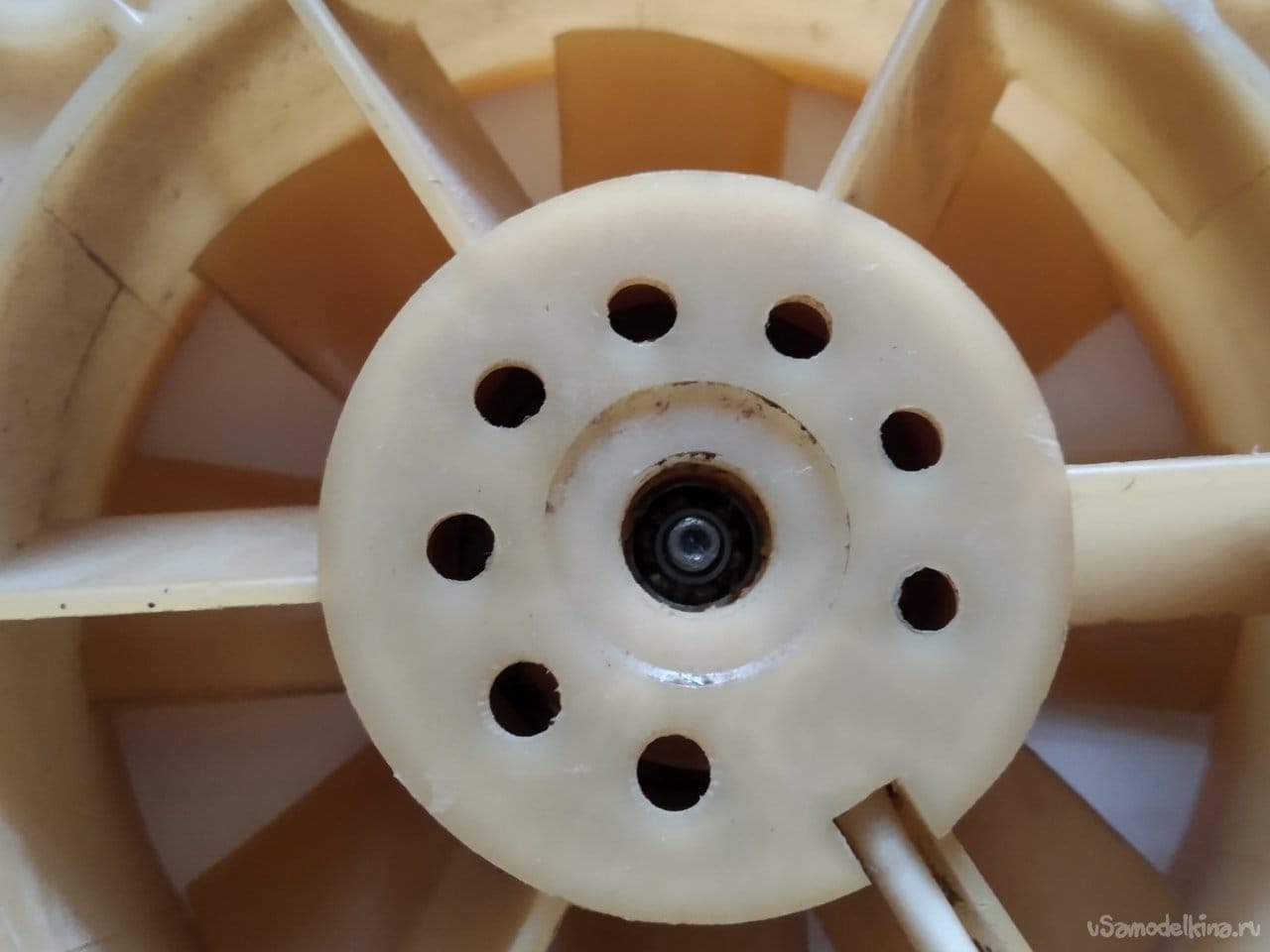 After that, an electric motor was installed in the clutch. 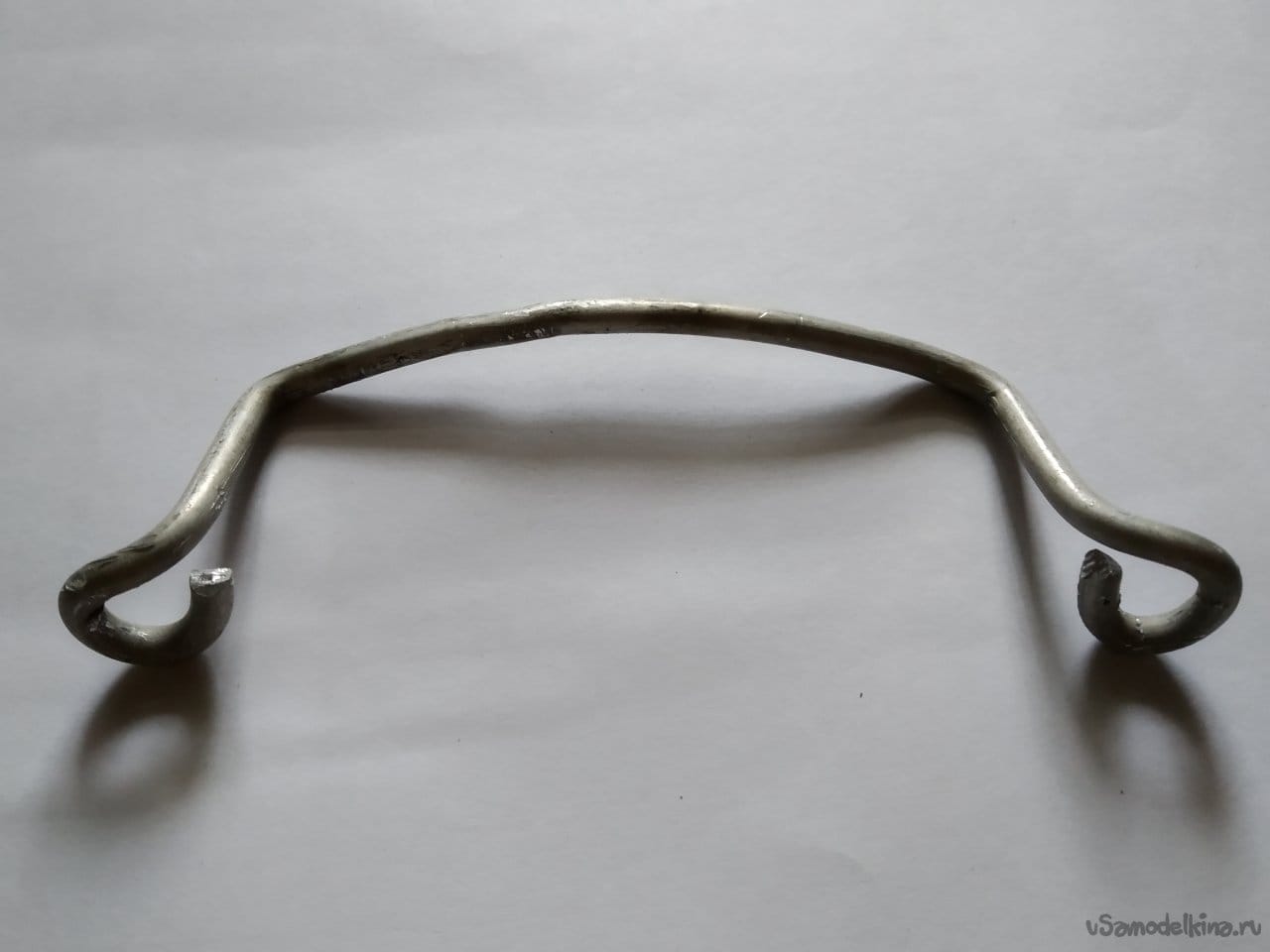 Then the bracket was attached to the fan casing with two screws. 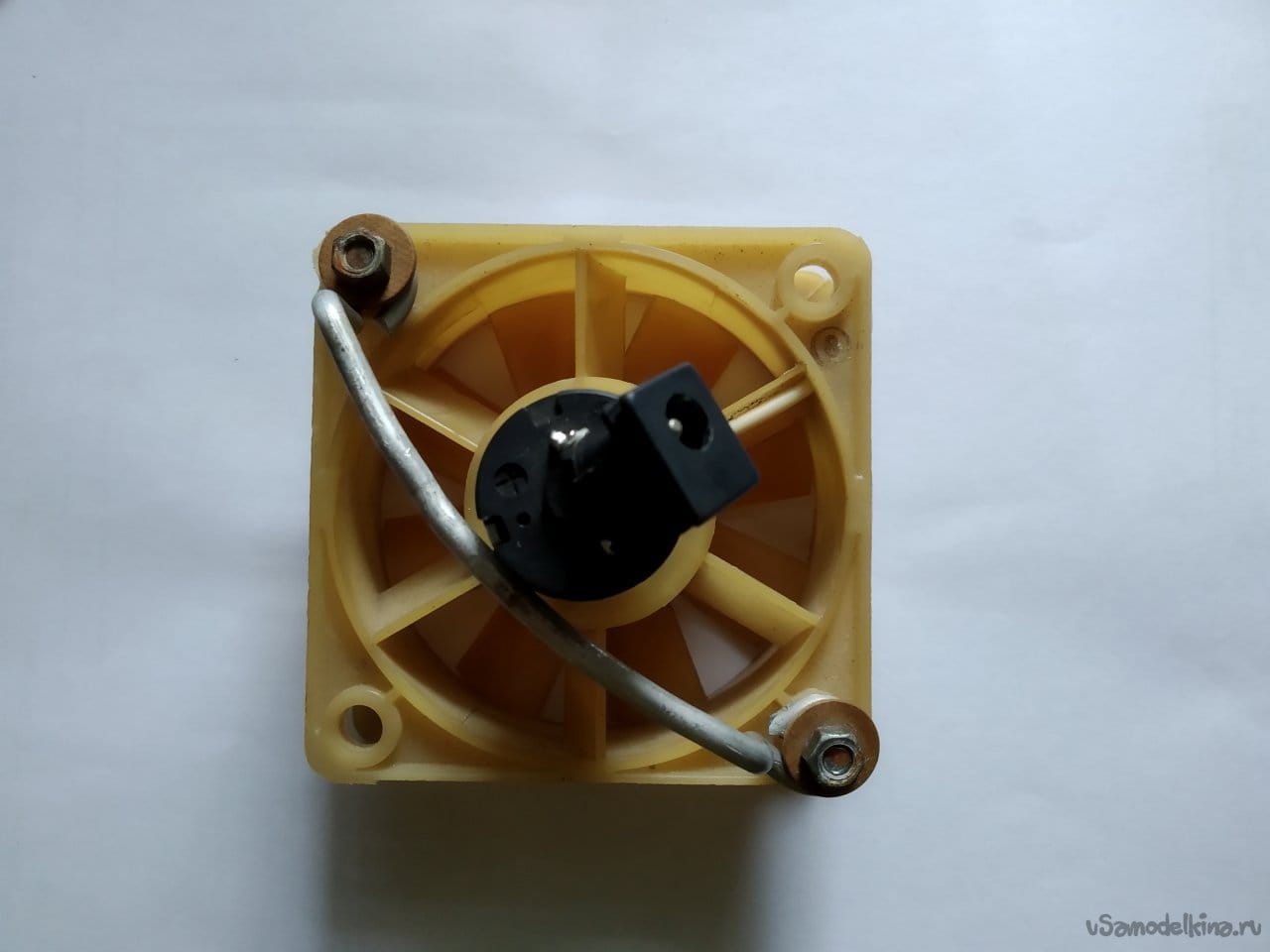 A small spring was used to attach the motor to the bracket.
This mounting method, although it does not have a very aesthetic appearance and does not seem to be reliable enough, but unlike a rigid mount using, for example, a metal plate and screws, provides some mobility of the engine, which is necessary to compensate for vibrations arising during operation due to a slight misalignment of the shafts engine and fan.
Next, it is necessary to make a cooler housing for this, a six-liter capacity was used. The top has been cut at such a level that a fan can be inserted into it. 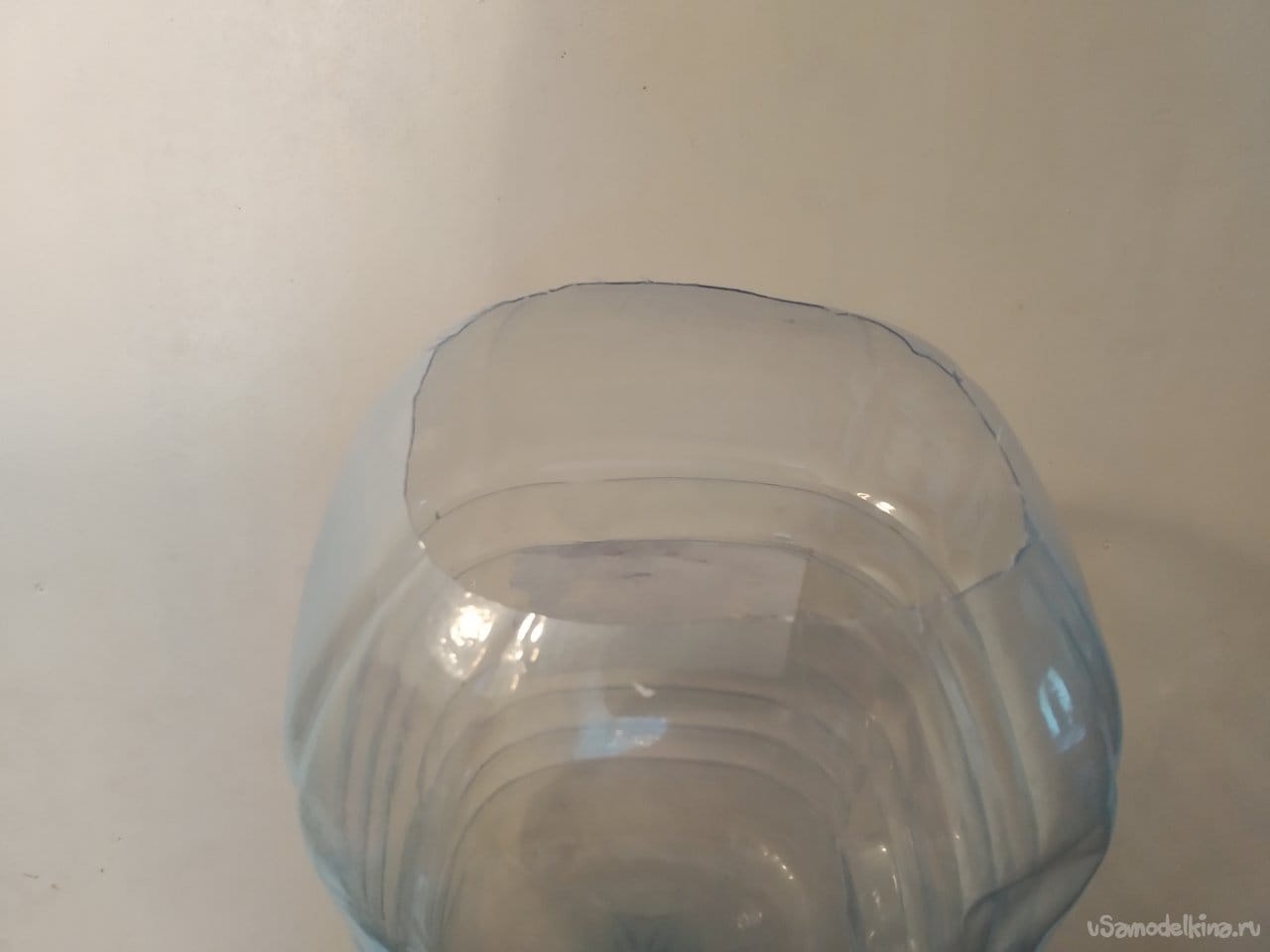 Next, it was required to make a sealing gasket to prevent air leakage between the fan casing and the walls of the hole cut in the container. A piece of rubber was used for this.
The rubber strip must be rolled up to form a sleeve. A piece of aluminum wire was used to fasten the edge. 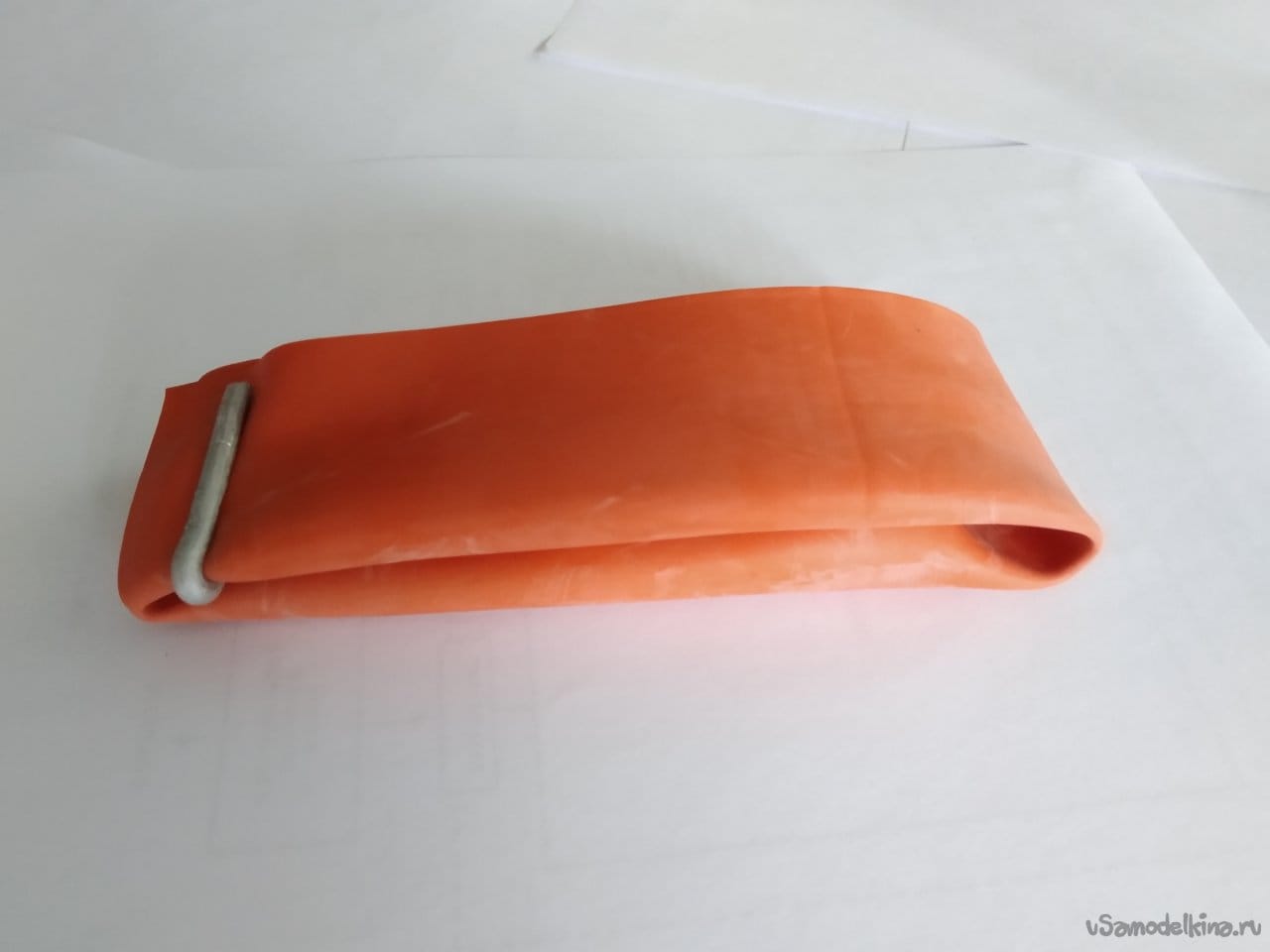 Sealing is necessary so that the entire air flow generated by the fan is directed to the outlet window. This window must be cut at a height of about three centimeters from the bottom of the bottle, as shown in the photo below.
The bent part of the tank wall serves to direct the cooled air flow at an upward angle. This is necessary so that the cold air, which is known to descend downward, could be spread over a greater distance from the cooler.
Next, it was required to make a stand for the cold accumulators. For this, a piece of insulated wire was used. A thin rope could have been used instead, but the fabric could work like a wick, draining condensation outside the cooler. You can also use fishing line. 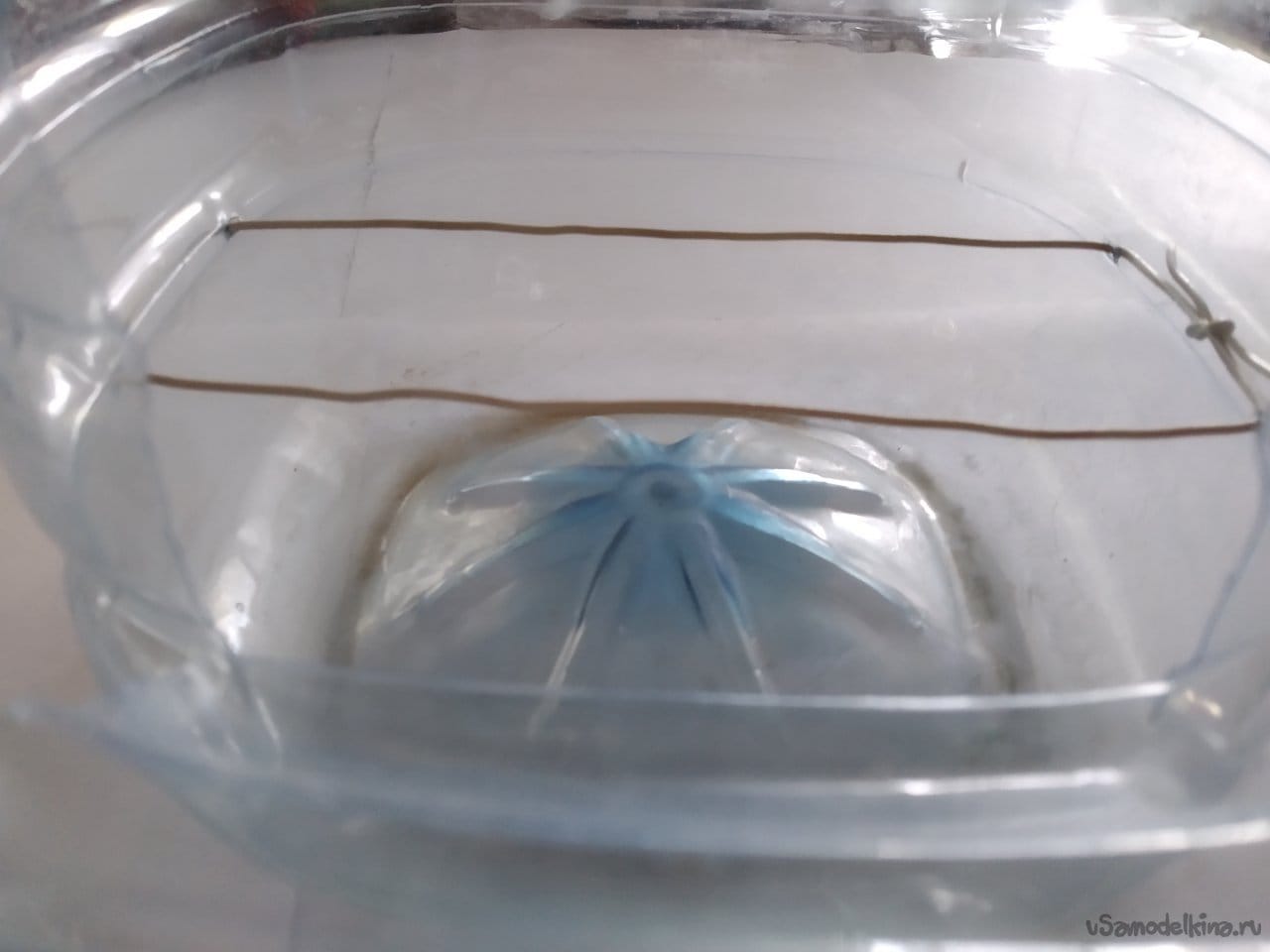 Thermocouples are installed as follows: 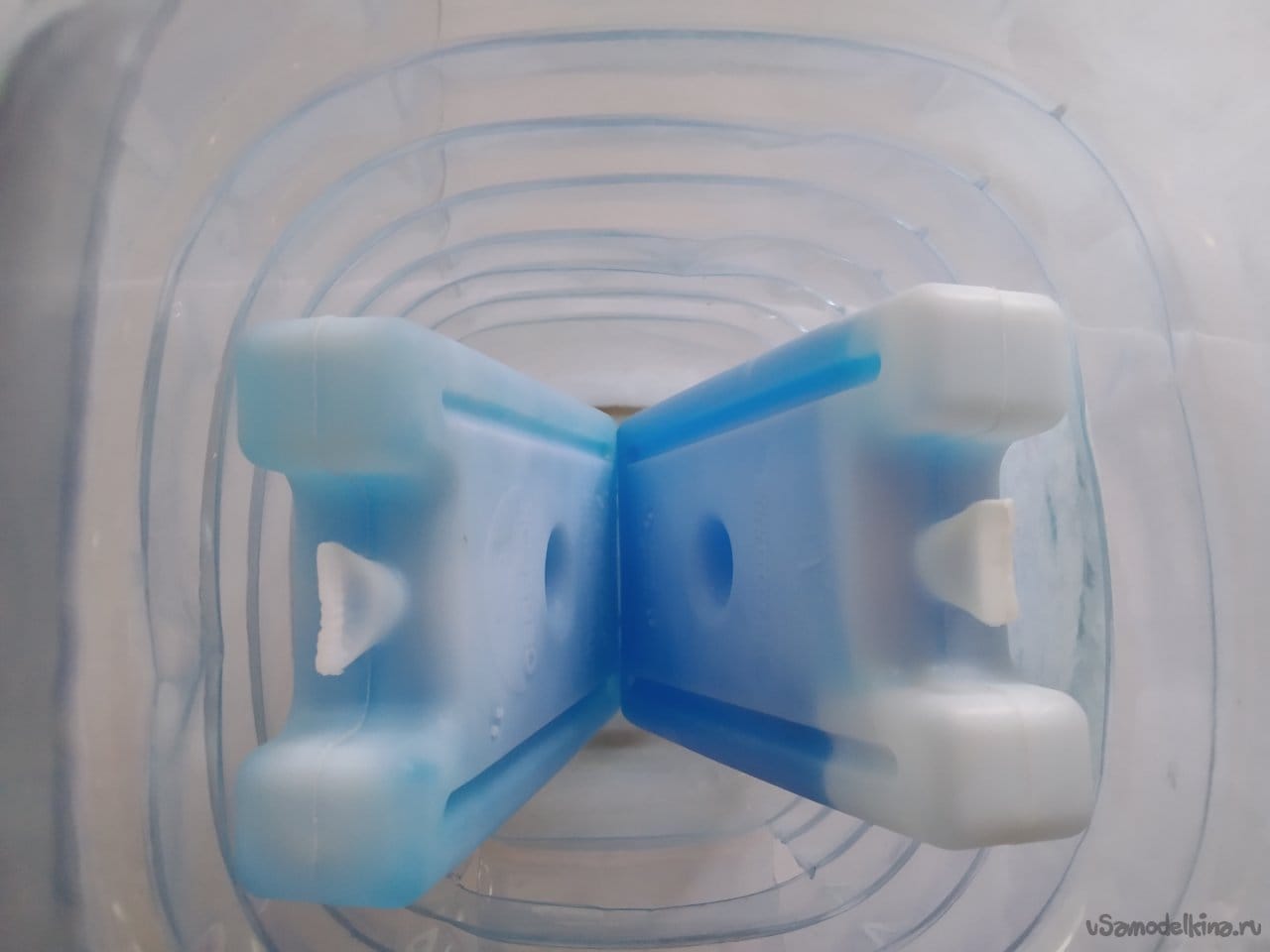 Now, as for the thermoelements themselves, FCE-2 elements were used, of course, you can use any other cold accumulators or an ordinary container with ice. 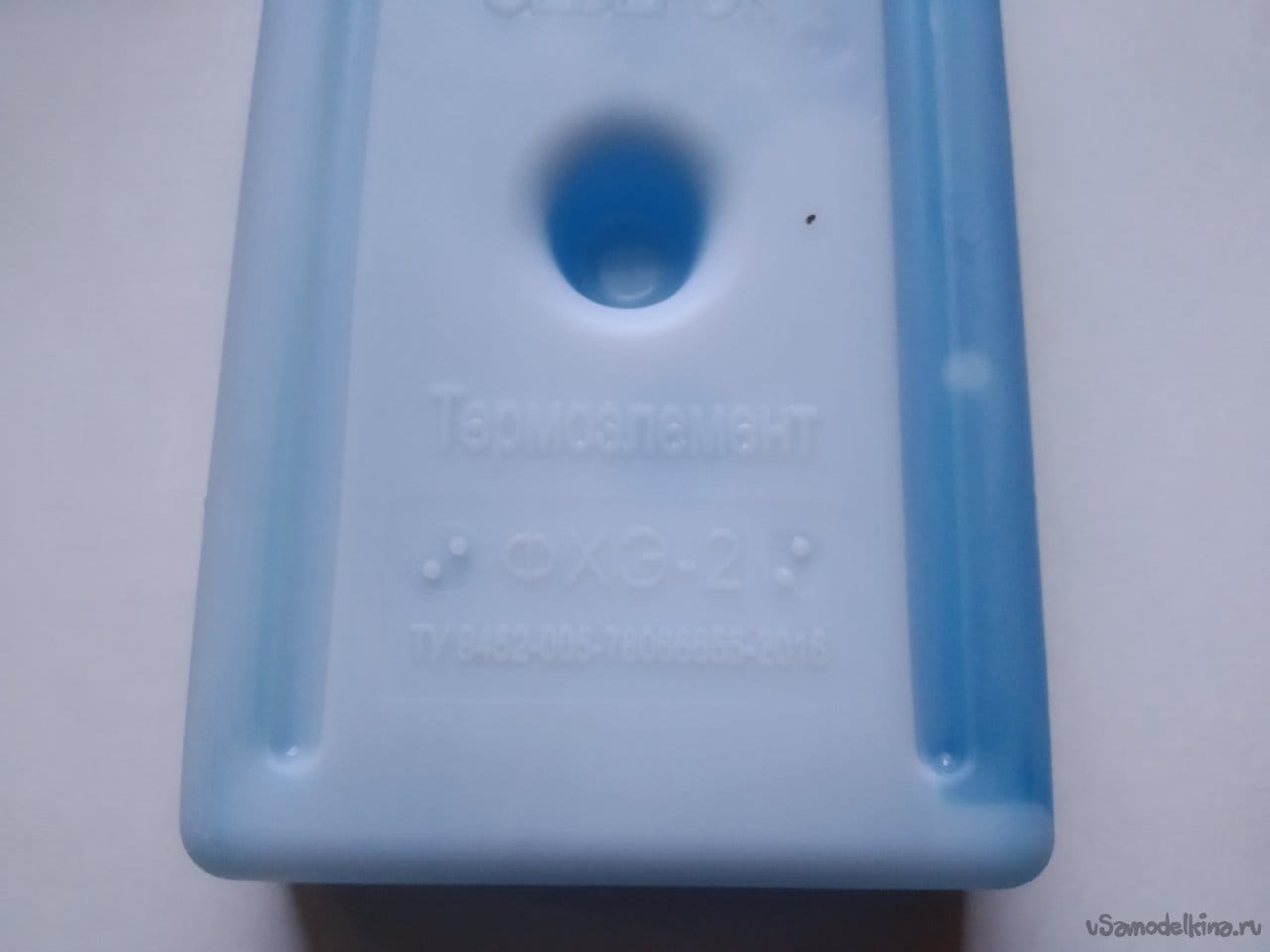 The photo below shows the thermometer readings at the moment the cooler was turned on and 15 minutes after the start of its operation.
The thermometer was installed at a distance of about 20 centimeters from the outlet of the cooler. Although this thermometer recorded a decrease in temperature by almost two degrees, in the entire room the temperature dropped by hardly one degree, therefore it is more expedient to use such a cooler as a fan, i.e. direct the flow of cooled air directly towards yourself, and not try to cool the room as is the case with a conventional air conditioner. But such a home-made “air conditioner” makes it easier to endure the heat, not only cooling the air, but also reducing the relative humidity in the room (as you know, dry air increases the efficiency of sweat evaporation from the surface of the human body and, accordingly, improves thermoregulation). Dehumidification of air occurs, as it is not difficult to guess, due to condensation of atmospheric moisture on the surface of thermoelements, the resulting liquid is collected at the bottom of the tank from which the cooler is made. The attentive reader may notice that in the photo of the thermometer-hygrometer, the humidity readings did not decrease, but, on the contrary, increased significantly. This is due to the small distance from the cooler to the thermometer-hygrometer. The fact is that the air near the surface of thermoelements due to cooling is oversaturated with moisture forming an aerosol, which is carried out by the air flow outside the cooler and settles at a certain distance, in particular, these drops of moisture fell on the sensitive element of the thermometer-hygrometer and distorted its readings.
Below are some more photos of the finished device: 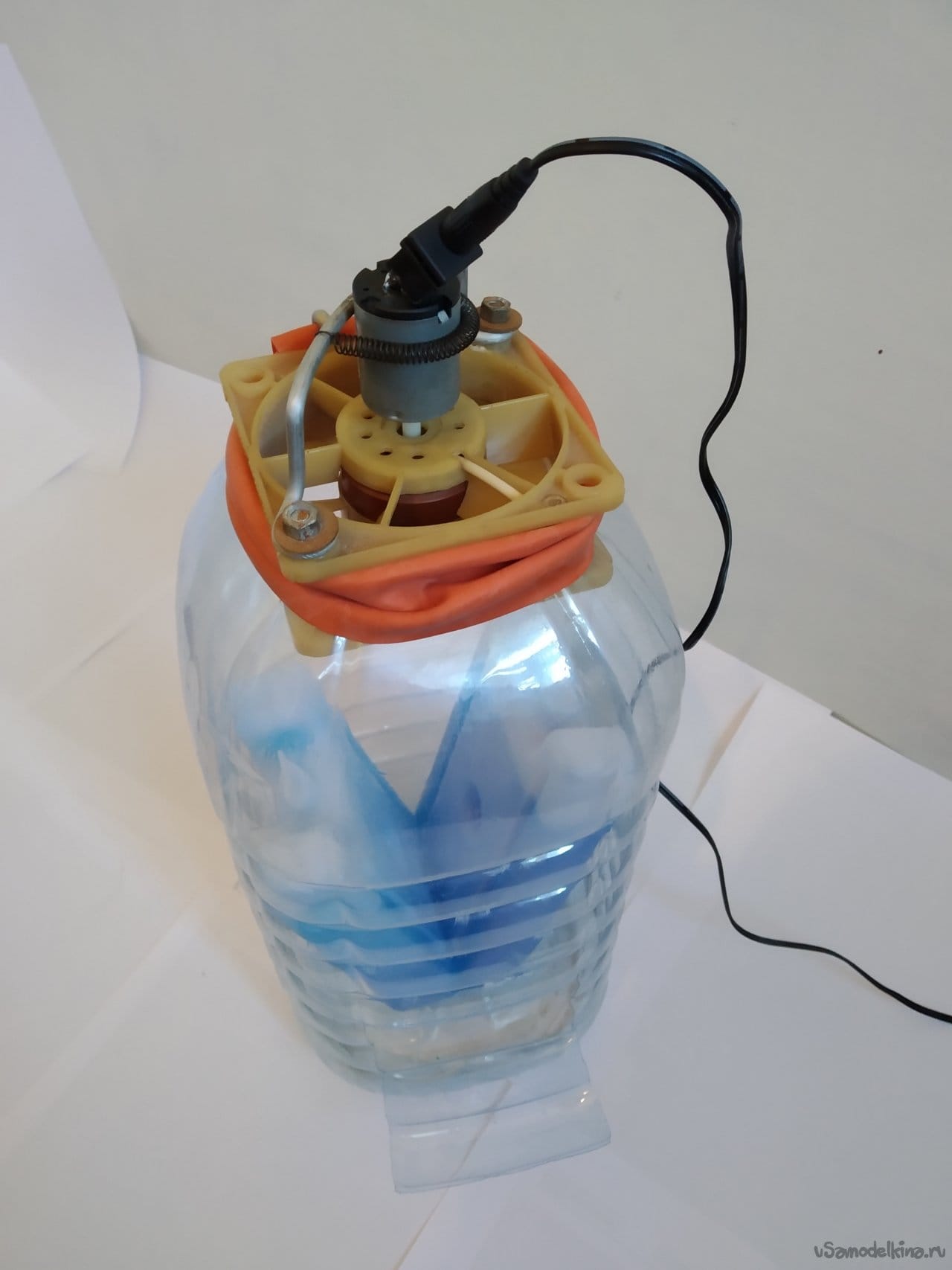 Straighten the wire and make bowdens for the glider model