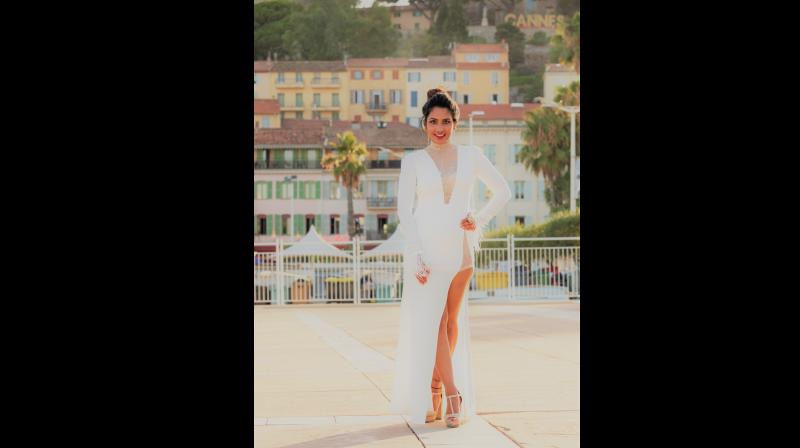 The Cannes Film Festival, which concluded last month, had from the fashion community Indians representing the country. US-based Indian celebrity stylist and designer Anjali Phougat showcased her collection through supermodel Chaitanya Poloju, who walked the red carpet at the prestigious event.

Chaitanya, a Telugu girl born in Hyderabad, moved to America in 2010 after she got married. She has already made her mark in life. An IT engineer and actress and a fashion model, motivational speaker, pageant coach, coordinator and advisor, she is also a philanthropist, who was also crowned ‘Mrs. BHARAT 2019’ in New York. Naturally, the red carpet walk at the Mecca of creativity, representing India and the USA, has added a feather in her cap.

“Perhaps the best experience of my modelling career so far. It was surreal,” comments the mother of a 5-year-old girl, as she reflects on the walk, which she considers a validation of her hard work and relentless perseverance. “It was an honour to be sharing the podium with Hollywood celebs and other super international models at such a global stage.”

For her walk, Chaitanya sported an Indian Princess Gown drape in peach colour, something that her designer Anjali had thought of, with her look for the ensemble kept elegant, classy, yet minimal—giving many the impression that Chaitanya was princess Jasmine from Aladdin.

In fact, the designer’s collection at Cannes comprised neutral colour palettes, pastel hues and florals, keeping the weather in mind with Indian zardosi work to complement. And because it was important that Chaitanya also looked comfortable and carried the look with élan, it took a few brainstorming sessions for the designer and model duo to zero in on her look at Cannes.

Of course, it helped that both of them have known each other for quite some time. So they were on the same page when it comes to getting the desired wear. “We’d hoped for the outfit to reflect the Indian-ness while appealing to the West. So we struck a balance by blending both,” states Chaitanya.

Despite the enormity of what Cannes meant, Chaitanya tells us she was nervous. Clearly, her experience of walking the ramp in events such as New York Fashion Week 2020, for the famous Bollywood designer Kirti Rathore, and being into pageantry and other shows came in handy for the Telugu girl with roots in Hyderabad.

We are told Chaitanya was the first choice for Anjali, who’d been invited to Cannes to showcase her collections. When she got a call from the designer asking if she could walk the red carpet for her at Cannes, she was clearly over the moon. “I felt so happy when I learnt that Anjali called me. I applied for Visa immediately but the authorities told me that it may take some more time,” she recalls.

But being the thorough person she is, it didn’t take Chaitanya much to make the authorities see that her documentation work and credentials were perfect. With the visa processed quickly thereafter, Chaitanya landed in Cannes on 14 July and was there for five days,  gathering mind-blowing insights into the fashion world. “I explored the city and experienced several aspects of the fashion and cultural world, too,” she adds, her joy at the recent events clearly showing in her beaming smile.

Of course, Chaitanya has been in the industry enough to understand that the Cannes’ event, which she considers the icing on the cake with respect to her career, will open new possibilities to help her carry her name in the global arena.

A model of perseverance

The holder of quite a few pageant titles including Mrs global Showstopper 2020, Mrs Bharat New York 2019 and Mrs Bharat USA 2019 Runner Up, Chaitanya, interestingly took to modelling only in 2016. She also debuted as an actress with Cocktail Diaries, a Telugu web series on Amazon Prime.

The mother of a 6-year-old daughter, Chaitanya remembers life was not always a bed of roses. Like many mothers, she too suffered from sadness, anxiety and difficulties in making decisions after her pregnancy and childbirth in 2015. She remembers wondering what else she can do apart from the IT job she held then.

Her husband, who is into movie direction, art and photography, encouraged her to do something in fashion. But that was also because Chaitanya had been inclined towards fashion since her childhood.

“I’ve always liked dressing up and looking presentable, but I never thought seriously about making a career in fashion,” recollects Chaitanya. “But after my husband reinvigorated the spirit in me, I decided to give it a shot. And soon, I began walking the ramp in fashion shows and doing pageant shows.”

It didn’t take her long to become a renowned name, and designers in the Indian communities began approaching her to walk for their collections.

All that finally matters

Chaitanya’s rise is something on its own, but all the more applause-worthy considering that as a child she was bullied for her darker complexion, curly hair and ‘fat’ nose. “But I always saw life beyond society’s normalisation. And honestly, those experiences made me not only stronger and focused but also compassionate. In fact, irrespective of what others have to say today, I embrace my wheat-ish skin tone,” she adds with pride.

As we wrap up our interaction, we ask what fashion means to her. “To me, fashion is an expression, lifestyle, experimentation putting things together beautifully and a choice. Fashion to me is the first impression, a glimpse into one’s personality and a differentiation factor,” she says.

That said, she believes that the pandemic has been changing the way the world functions. “The fashion industry too is witnessing a sea change. For one, it’s shifted from glitter and glam to a comfortable and cosy lifestyle. I also strongly hope we’re inclined towards cruelty-free choices post-pandemic,” she says, signing off.

She is ecstatic about the proud moment when showcased the mesmerising Indian handcrafted fashion at the Cannes film festival. And Anjali was looking for the right model—someone who could break the stereotypes—and she found Chaitanya’s skin tone to be the natural choice.

To Anjali, Chaitanya being a social worker also reflected the ideologies of a strong woman and her individuality. “I could find an instant connection with Chaitanya,” she elaborates. “I believe in diversity and hoped to portray an honest woman with confident looks. I am glad Chaitanya elegantly carried the essence of what I’d envisioned.”

Speaking of what went into the making of the mesmerizing gown, Anjali, who is also a vice-president at a banking firm in the US, tells us that the gown—which was crafted from French tulle and cut in a fitted silhouette—was decorated with pink and blue neutral undertone flowers on the bottom with cut-out sequin floral embellished details.

With hand-textured Italian fabric and net and floral, crystals, Swarovski, sequin hand-embroidery, the gown shone. “We designed the outfit virtually and picked light colours to project Indian skin tones, which I believe can look beautiful in any colour palette,” says the designer who points out that they wanted to ensure the clothing reflected the Indian essence through a long gold veil added to the gown. “Since Chaitanya had to walk and be in an outfit for a long time, we ensured the fabric was soft and comfortable because fashion is incomplete without comfort.”

International Cat Day: 9 things you only know if you’re definitely a cat person

A fashionable history of platform shoes

Putting life under the lens