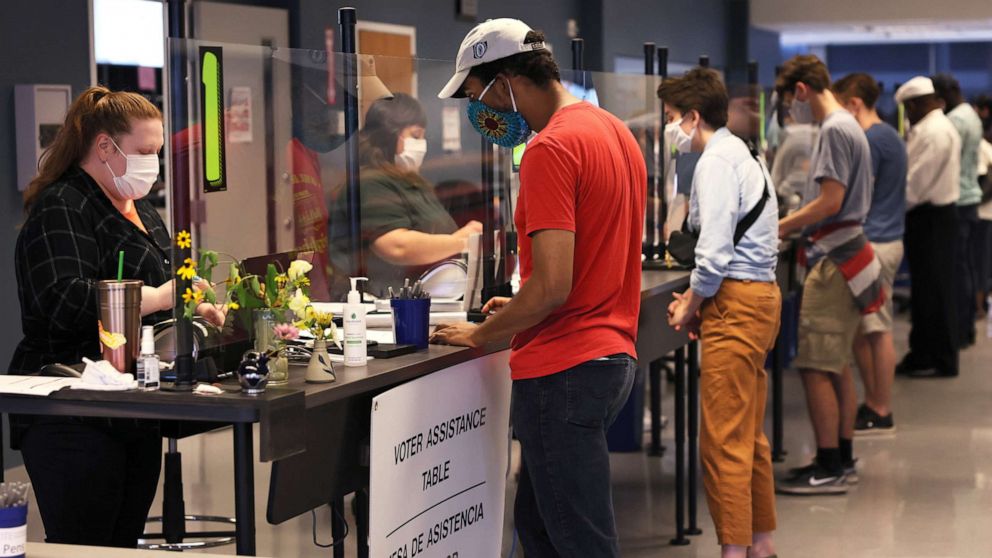 Who’s afraid of a president — current or former?

Voters in Ohio will nominate two House candidates on Tuesday who will be virtually assured of winning seats in November. One will be a Democrat in deep-blue Cleveland and Akron, the other a Republican in a ruby-red swath in the Columbus area.

That’s just the start of the intriguing storylines out of this unique pair of special elections. The primaries offer mirror-image snapshots of the sway of both President Joe Biden and former President Donald Trump, with takeaways that will resonate well into 2022.

Both Democratic front-runners in Ohio’s 11th Congressional District are Black women. They represent radically different strains of the party — and Nina Turner’s notoriety and ties to progressive activists have brought fierce attacks from allies of Shontel Brown, who is backed by elected leaders and outside groups with closer ties to the White House.

The more scattered GOP race in the 15th Congressional District features lower-profile candidates, but deeper involvement by Trump and his allies. The former president has gone all-in for Mike Carey, a longtime energy lobbyist, and has attacked other candidates who suggest they have his backing.

Trump’s political operation has much on the line after his preferred candidate fell short in a different special-election runoff in Texas. As in that race, the other front-runners profess support for the former president and also bring deep local backing to traditionally low-turnout elections.

The race in the blue district has turned broadly on questions of which Democrat is best situated for the Biden era — an outspoken progressive or a more establishment pragmatist.

The race in the red district is less about whether to support Trump than it is whether Trump should get to choose which candidates the Republican Party nominates.

While lawmakers in Washington continue pointing fingers on the eviction moratorium, millions of Americans are on the brink of being pushed out of their homes.

Despite that fact, there has been no resolution on the issue. The House is on a six-week recess and even if the body were to reconvene there likely aren’t the votes in the Senate for it to pass. The White House, which called for Congress to act one day before the House’s recess, isn’t budging on the issue either.

Much of the finger-pointing has been within the Democratic Party. Speaker Nancy Pelosi and progressives in the House have called on the Biden administration to act. While Biden has charged Congress with taking steps to extend the moratorium. In a statement, White House press secretary Jen Psaki said the Centers for Disease Control and Prevention is “unable to find legal authority for a new, targeted eviction moratorium,” citing a recent Supreme Court decision.

Instead of an extension, the White House is urging states to distribute federal rental relief funds that have been slow to trickle down to those in need and extend the moratorium on a state or local level. The argument being that getting those funds distributed would help both families at risk of eviction and landlords who need to make ends meet. Some states have extended that moratorium, but the majority have not.

The White House is also “challenging every landlord to hold off on evictions for the next 30 days,” a concept that without the legal compulsion feels laughable at best and isn’t likely to provide any real solace to those in eviction limbo.

According to a survey from the Census Bureau, 3.6 million Americans think it is somewhat or very likely they would be evicted in the next two months. If no action is taken, those thoughts will become a reality fueling an eviction crisis across much of the country.

Whoever wins the election to fill the House seat formerly held by Housing and Urban Development Secretary Marcia Fudge is all but guaranteed to go on to carry the district’s decades-long political legacy of being represented by a Black woman in Congress.

The path to that likely victory will also test the influence of the storied Congressional Black Caucus, whose establishment Democratic members hit the campaign trail in support of Shontel Brown, over Nina Turner this past weekend. The divide is largely centered on Turner’s heated rhetoric aimed at Biden during the general election cycle. In an interview with The Atlantic following Biden’s primary win, Turner infamously compared voting for Biden over Trump to eating half a bowl of excrement, rather than eating the entire bowl.

Turner told ABC News that she is looking “forward to working with Democrats across the spectrum” if she wins and hopes that people will see her as a “coalition builder,” even though “people might not always agree with (her.)” But members of the Congressional Black Caucus appear to be firmly rooted in their beliefs that a Turner victory would be counterproductive to Democratic law-making efforts on Capitol Hill.

“We need somebody from the 11th district here in Ohio who will work with Joe Biden, somebody who believes in his agenda that he’s put forth, not somebody who is going to insult the president,” House Majority Whip Jim Clyburn said to cheers and applause from supporters, while stumping for Brown over the weekend.

ABC News’ “Start Here” podcast. Tuesday morning’s episode features Louisiana nurse Felicia Croft, who explains what she is seeing as her hospital continues to fill up with COVID patients. ABC News Congressional Correspondent Rachel Scott tells us what’s in the bipartisan infrastructure bill. And ABC News foreign correspondent James Longman checks in from Tokyo, where some Olympians are raising eyebrows at the continued success of Russia Olympic Committee athletes. http://apple.co/2HPocUL

FiveThirtyEight’s Politics Podcast. There are two special primary elections happening in Ohio this week, each with implications for Democrats’ and Republicans’ debates about how tightly to embrace establishment politicians in their parties. On this week’s episode, the FiveThirtyEight politics crew talks about what these races might mean for 2022 midterm races. They also talk about how the California recall election is shaping up after a recent poll showed increased support for recalling current Gov. Gavin Newsom and the decision from the U.S. Census Bureau to not release estimates from the 2020 American Community Survey. https://53eig.ht/3fc3zR7

SC pulls up CBI, IB, cops for inaction over complaints by CJs