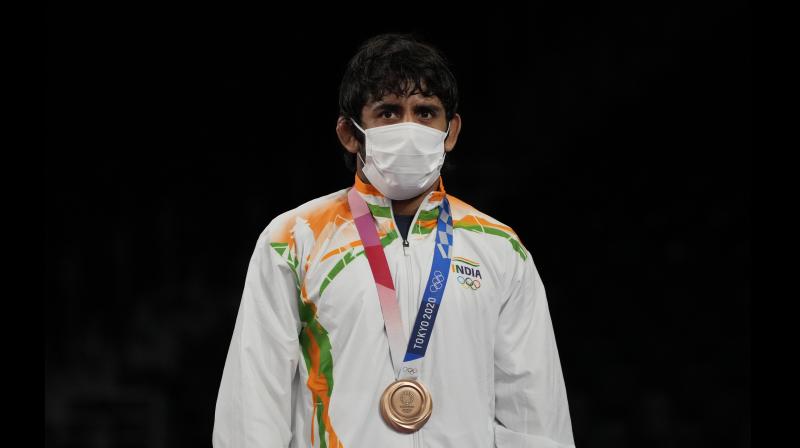 Sonipat, Aug 7 (PTI) "My son has realized my dream," said Bajrang Punia's father Balwan Singh, holding back tears of joy after the star Indian wrestler clinched a bronze at the Tokyo Olympics.

Punia outwitted Kazakhstan's Daulet Niyazbekov 8-0 in the play-off on Saturday to win India's sixth medal at the ongoing edition.

"I had told you in the morning that he will not return without a medal. He has realized my dream by winning the medal," said Balwan Singh told reporters here here.

Bajrang produced smart attacking moves to completely dominate the proceedings against Niyazbekov, to whom he had lost in the semifinals of the 2019 World Championship.

Bajrang's family watched the proceedings live on TV along with scores of journalists and once the wrestler ended the bout, Balwan Singh was overwhelmed with emotions.

"Bajrang has made the country proud..I cannot tell you how happy I am feeling," he said.

"My heart says he will win," said the wrestler's mother, shortly before the event got underway, and her joy knew no bounds after her son tasted victory.

On the street outside, celebration broke out as family, friends and well-wishers burst firecrackers, distributed sweets and danced.

After Bajrang lost the seminal bout on Friday, Balwan Singh said he and his mother spoke to him and told him that he should not feel disheartened.

"We told him to not feel disheartened and keep his focus. He assured us that he will bring a medal," said Balwan Singh.

With Bajrang's medal, Indian wrestlers have matched their best performance at the Olympic Games. At the 2012 London Games, Sushil Kumar won a silver and Yogeshwar Dutt returned with a bronze. With his podium, India also equalled their best ever Olympic medal haul of six achieved in in the 2012 London edition. Bajrang had defeated Kyrgyzstan's Ernazar Akmataliev and Iran's Morteza Cheka Ghiasi before losing to Hazai Aliev from Azerbaijan in the semifinals on Friday.

Fabinho says rivals’ transfer business is none of Liverpool’s business