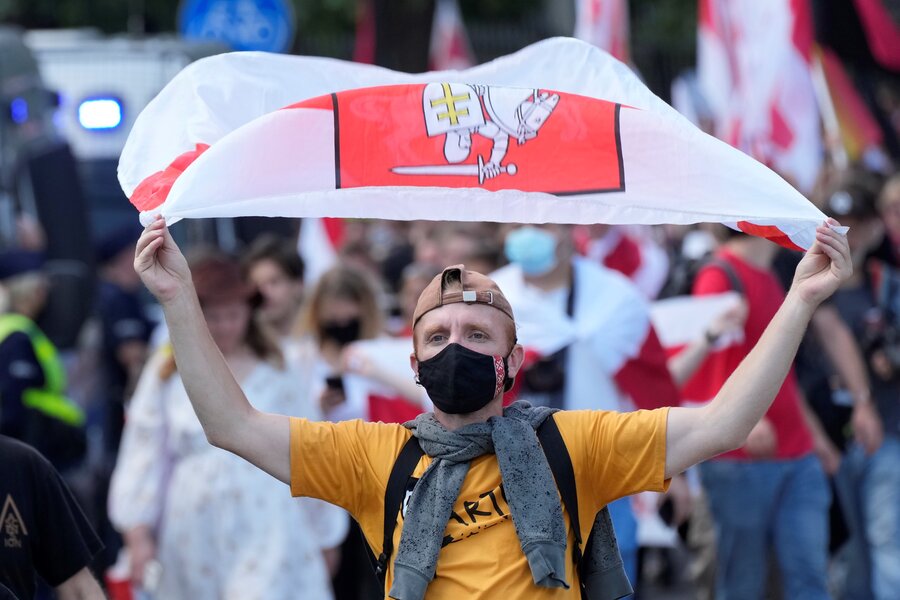 Hundreds of people, among them many Belarusians living in exile in Poland, marched Sunday in Warsaw to protest political repression in neighboring Belarus – a demonstration held on the eve of the one-year anniversary of the Belarus presidential election that they consider rigged.

Many carried the Belarusian opposition’s red-and-white flag, which is banned in Belarus, and chanted “Long live Belarus!”

The protest focused on the Aug. 9, 2020 presidential election in Belarus in which President Alexander Lukashenko was awarded a sixth term in a vote that the opposition and many in the West view as fraudulent.

A belief that the vote was stolen triggered mass protests in Belarus that led to increased repressions by Mr. Lukashenko’s regime on protesters, dissidents, and independent media. Over 35,000 people were arrested and thousands were beaten and jailed.

The protesters began in central Warsaw and marched past the U.S. and Russian embassies, aiming for the Belarusian embassy in a southern Warsaw district.

Frantz Aslauski, a Belarusian who traveled from his new home in Wroclaw, Poland, said he believed Belarusians abroad must protest “because in Belarus people cannot go to the streets because they will be thrown into prison.”

“We have the opportunity [to demonstrate], therefore this responsibility rests on us, we must shout at the whole world, so that the whole world supports us in our pursuit of freedom and democracy,” Mr. Aslauski said.

In front of the Russian embassy, speakers accused Russian President Vladimir Putin of being responsible for the repressions in Belarus. One banner showed an image of Mr. Lukashenko depicted as a vampire, with blood dripping from his mouth.

Mr. Lukashenko has earned the nickname of “Europe’s last dictator” in the West for his relentless repression of dissent since taking the helm in 1994. In one case, the regime this year arrested a dissident journalist after forcing his flight to divert to Belarus.

The organizers of the Warsaw march said the event was held as a sign that Belarusians in Poland will not give up their fight to bring change to Belarus. Among their demands was the release of political prisoners back home.

Poland, along with Lithuania and Ukraine, has become a key center of life in exile for Belarusians who have fled their homeland. Many people in Poland, an ex-communist country now in the European Union that shares a border with Belarus, support the efforts of Belarusians seeking democratic change.

One of the most recent Belarusians to arrive is Krystsina Tsimanouskaya, an Olympic sprinter who, fearing reprisals at home, fled last week from the Tokyo Olympics to Poland.

Thousands of Belarusians have also fled to neighboring Ukraine, fearing persecution back home. In Ukraine’s capital of Kyiv on Sunday, some 500 Belarusians also took to the streets to protest repression in Belarus and to mark the anniversary of the presidential election that triggered the largest and the most sustained wave of protests in Belarus’ history.

The demonstrators carried red-and-white flags and banners saying “Belarus under Lukashenko has become a concentration camp,” “North Korea in the center of Europe. Stop.” They demanded that international authorities create a tribunal to investigate what they called Lukashenko’s crimes.

“Every day Lukashenko is in power, there are more victims of political repressions, even in Ukraine,” Bazhena Zholudz said at the rally.

Ms. Zholudz was the girlfriend of Vitaly Shishov, a Belarusian activist who ran a group in Ukraine helping Belarusians fleeing persecution. Mr. Shishov was found hanged in Kyiv last week and Ukrainian police are investigating whether it was a murder made to look like a suicide.

Following Mr. Shishov’s death, Ukraine’s President Volodymyr Zelenskyy told the country’s police and security forces to study security risks for all Belarusians who have arrived in Ukraine over the past year.

“Every Belarusian who can be a target for criminals in connection with his public political position should receive special and reliable protection,” Mr. Zelenskyy’s office quoted him as saying.