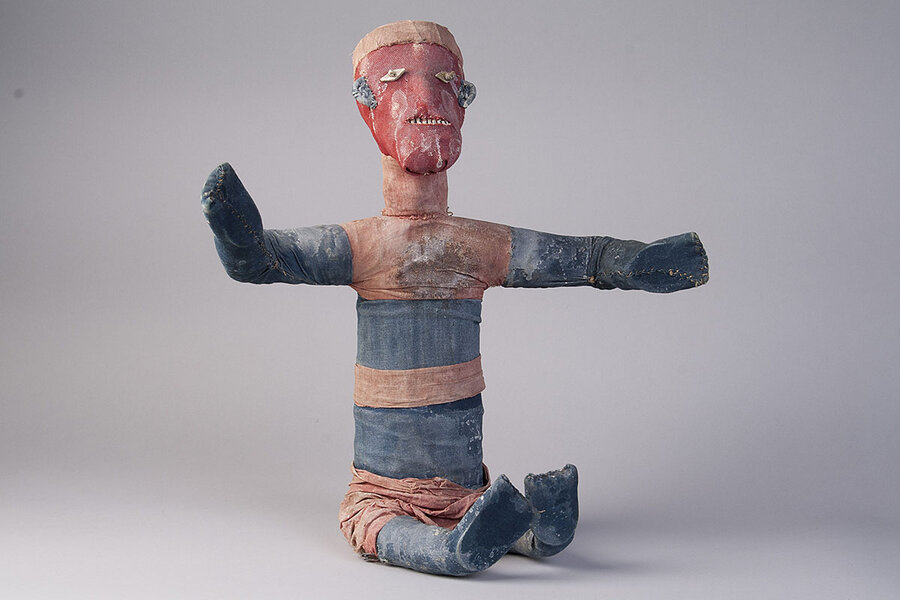 The man is seated, his legs and hands outstretched, wearing a colorful ensemble of blue and red stripes. His back is straight – he’s alert and ready to protect his descendants from misfortune and illness.

This knee-high reliquary made of wood pegs, split cane, vegetable fiber, and cloth was once used to house specific ancestral spirits, researchers think. Such figurines are produced by ethnic Bembe in central Africa and were traditionally used to hold human remains that, according to Bembe beliefs, will pass through stages of an endless cycle of being.

This figurine took its own zigzag journey out of Africa to end up in a small Midwest museum. Just don’t expect to find all that information on its accompanying sign.

Major European museums are directly implicated in the colonial-era looting of artifacts from Africa and face growing pressure for repatriation. U.S. collections also face their own ethical and legal questions.

“Straight up donation. And that’s pretty much all we know about it,” says Laura De Becker, an associate curator at the University of Michigan Museum of Art in Ann Arbor.

Not knowing the figurine’s provenance raises legal and ethical questions at a time when museums across Europe are grappling with a colonial legacy of looted artwork and artifacts. In recent years, amid increasing calls for restitution, some European governments have repatriated items to Africa. Germany recently agreed to return hundreds of artifacts to Nigeria that had been earmarked for a new museum in Berlin.

The question for U.S. institutions, which aren’t directly tainted by colonialism in Africa, is to what extent they should investigate their own collections for traces of duplicity and theft and then reconsider who may be the rightful owner. This marks a change for cultural institutions that have acquired artwork from auctions or collectors that may pass through multiple hands along the way.

“We’ve had quite a number of American museums reaching out to ask how they could [return] some of the works in their possession,” says Enotie Ogbebor, a Nigerian who works with institutions and governments to facilitate the return of stolen artifacts. These include the Benin Bronzes, a series of works made of bronze and other materials that invading British forces removed from the Kingdom of Benin – in present-day Nigeria – in 1897, many of which were later auctioned off.

Mr. Ogbebor is based in Benin City, Nigeria, where a new museum is being built to house repatriated artifacts. He points out that Benin Bronzes are found in museums from Los Angeles to Cleveland to London to Berlin, often prominently on display.

“This is not a case of ‘Give me back my stolen artifacts, and never talk to me again,’” he says. Instead, he envisages a future of collaboration, sharing, and loaning of artifacts among cultural institutions – but finally on the terms of the countries, or specific communities, where those objects originated.

Mr. Ogbebor hopes that greater awareness in the U.S. and Europe about the issue will keep it on the front burner. “There was an injustice perpetrated 130 years ago. It’s time to close that cycle, so that the people who own this culture, these cultural artifacts, can get them back, be able to see them, study them, learn about them,” he says.

So where does that leave U.S. museums and their collections of non-Western objects?

“Don’t keep the stolen things. Like, that’s it. It’s kind of a no-brainer,” says Carlee Forbes, an art historian whose job is to identify such items at the Fowler Museum at the University of California, Los Angeles. The museum, which is part of the School of Arts and Architecture, specializes in cultures from Africa, Asia, the Pacific, and the Americas.

But not keeping “the stolen things” is often easier said than done. Ms. Forbes is the beneficiary of a grant that has allowed the museum to research the provenance of its African collection. For other institutions with large collections and scant documentation for objects, the task of investigating and potentially returning artifacts is daunting. Still, curators say that there’s no turning back to the era when U.S. museums would snap up global artifacts without asking too many questions.

In Ann Arbor, Ms. De Becker is staging an exhibition of various works, including the Bembe figure and some Benin Bronzes, whose origins will be investigated concurrently with their display, as part of the show. Part of her motivation in doing so is because hosting an active exhibition is a workaround way to get the time and resources to investigate the works in question. The exhibition opens this month.

The ad hoc approach by private institutions to restitution in the U.S. stands in contrast to the push for restitution in Europe, where governments are involved and where many major museums are public. In 2007, French President Emmanuel Macron pledged to support the repatriation of African artwork and artifacts. “Africa’s patrimony must be celebrated in Paris but also in Dakar, Lagos, and Cotonou,” he said on a visit to Burkina Faso.

Controversy over the provenance of Western collections isn’t confined to African patrimony. The U.S. recently returned thousands of antiquities to Iraq, including many looted after the U.S. invasion in 2003 and sold to private collectors.

At the Fowler, Ms. Forbes and other museum researchers have identified works from South Africa and Ghana as potential items for restitution, as well as six Benin Bronzes, which they’ve determined were looted in 1897. Another 14 bronzes have been identified as “likely stolen.”

But Fowler researchers had to be picky: The museum hosts roughly 30,000 pieces in its African collection. The grant covers only a subset of 7,000 pieces donated in the 1960s. Researchers zeroed in on 800 items that were deemed important and had some documentation.

Still, just because collections are well documented doesn’t mean that their owners are eager to repatriate items acquired under dubious circumstances.

The largest collection of Benin Bronzes is at the British Museum in London. Its display caption describes their provenance, noting they were taken as “official ‘spoils of war’ and personal trophies”; it says the museum is “actively and openly investigating” them in collaboration with Nigerian partners. But it has repeatedly rejected calls for repatriation.

In June, New York’s Metropolitan Museum of Art announced the restitution to Nigeria of two Benin Bronzes and a brass head from the city of Ife. But it excluded the museum’s other holdings from Benin, estimated to number somewhere between 150 to 300. (The Met did not respond to requests for comment.)

Chika Okeke-Agulu, director of Princeton University’s Program in African Studies, says that U.S. museums deflect criticism by arguing that Africa was colonized by European powers “and therefore … restitution of objects that were taken during the colonial period was largely a European problem. But, of course, that’s nonsensical.”

He says their slow progress on the restitution of African artifacts contrasts with the norms and procedures established for returning art seized by the Nazis and their allies during the Holocaust or from Native Americans by European settlers.

Professor Okeke-Agulu commends Germany’s return of artifacts to Nigeria and draws a parallel with U.S. institutions that, like Germany, largely acquired looted African works on the international art market, rather than through direct colonial seizures. American museums, he says, “should ask them[selves] what makes them different from Germany, and German museums?”

Still, Mr. Ogbebor saw a significant shift in the Met’s decision to return three objects to Nigeria, and is hopeful of more to come. “We know that once there’s a groundswell, once this thing starts blowing … when we follow it up with a lot of diplomacy and continuous interaction in America, we’ll get better results,” he says.

Back in Ann Arbor, museum workers are beginning to research the exhibition pieces. Ms. De Becker is hopeful that institutions and art dealers can make progress on the thorny issue of restitution so that museums can “continue to be able to show African artworks, both historical and contemporary, and to celebrate the cultural traditions of the continent.”

In the case of the Bembe reliquary, researchers will try to figure out whether it journeyed to the U.S. under benign circumstances or if they should consider handing the man in red and blue cloth back to ethnic Bembe who live in the present-day Democratic Republic of Congo. That is, if the statue is a man. Ms. De Becker has always thought of the statue as depicting a male, though she admits that’s not a certainty.

United Airlines to require COVID vaccinations for all US based employees

Four officers who responded to Capitol riot have died by suicide