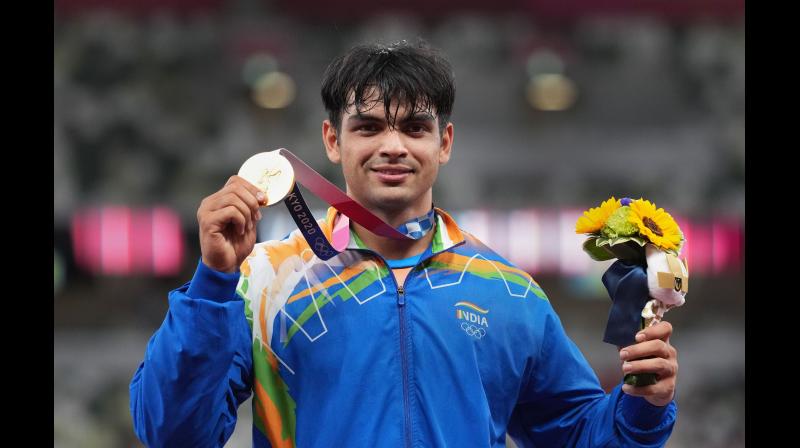 The 23-year-old farmer's son from Khandra village near Panipat in Haryana produced a second round throw of 87.58m in the finals to end India's 100-year wait for a track and field medal in the Olympics.

“It's a GOLD.Heartiest Congratulations @Neeraj_chopra1 on creating history. You're responsible for a billion tears of joy! Well done #NeerajChopra! #Tokyo2020,” Kumar wrote on Twitter.

Ajay Devgan said the athlete's win has left him elated.
“Congratulations Neeraj Chopra on your win at the Tokyo Olympics. More power to you! You've made your parents & India proud. Can't tell you how happy I am. This is awesome #NeerajChopra #TokyoOlympics.”

Pannu said the win has left her excited.
“It's a gold! I am jumping with Joy! This young man Neeraj Chopra has created history!”.

Varun Dhawan shared a live video of watching the athlete's performance at the Tokyo Olympics.

“Gold, gold it is. Neeraj Chopra has done it,” Dhawan captioned the clip.
Veteran actor-politician Hema Malini said the whole nation was proud of Chopra's efforts.

“Wonderful news for India as young Neeraj Chopra wins the javelin gold! So proud of you Neeraj! The country salutes you!” she posted on the microblogging site.

Actor John Abraham tweeted, “Congratulations @Neeraj_chopra1 on your historic accomplishment. The entire nation is proud of you! #CheerForIndia #Tokyo2020 #Olympics”

Actor Parambrata congratulated the sports star over his win.
“GOLD!! [email protected]raj_chopra1! Our very first gold in Athletics…an incredibly proud moment for the whole nation!!History has been made!” he wrote.
Actor couple Ali Fazal and Richa Chadha also celebrated India's gold win at the Olympics.

“Today is a big day for us.. Jai mata di.. Gold laaye hain hum (We got Gold). Bohot khoob Neeraj (Very good Neeraj). It was goosebumps all the way,” Fazal wrote.

The timeline of events which led to Lionel Messi departing Barcelona