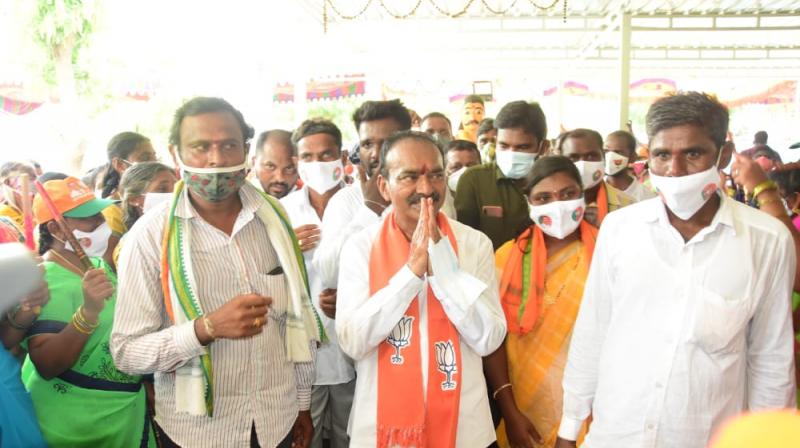 KARIMNAGAR:  “If Chief Minister K. Chandrasekhar Rao and finance minister T. Harish Rao have guts, either of them can compete against me in a fair and free Huzurabad by-poll,” ousted minister and BJP leader Etala Rajendar challenged on Sunday.

He was addressing a large number of Mudiraj community people of Jammikunta mandal, who joined the BJP in his presence at Chelpur village in Huzurabad mandal of Karimnagar district.

Rajendar pointed out that TRS ministers, who never saw Huzurabad, are now doing rounds of various mandals in the constituency and showering affection only for votes of Dalits and other weaker sections.

He referred to reports of TRS being willing to spend Rs 5,000 crore to win Huzurabad by-election. Announcement of Rs 10 lakh to each poor SC family under Dalit Bandhu scheme, distribution of sheep and goats, and funds for various communities are part of this. “People, however, can see through and will not vote for the ruling party,” he maintained.

The former minister said during Greater Hyderabad Municipal Corporation (GHMC) elections, the Chief Minister had promised Rs. 10,000 to each family affected by floods in Hyderabad. But he forgot all about the promise after civic body elections. “In Huzurabad too, KCR will go back on his word,” he warned.

Rajendar asked TRS government to desist from luring voters and leaders with money or posts. He also wanted the government to recall its police and intelligence officials who are threatening his followers and BJP activists.

“Even if there is lightning and thunder, nobody can stop my victory. CM KCR thinks what can a thin and lean Rajendar do once thrown out of TRS. But people of Huzurabad are for me. They are ready to teach a fitting lesson to the ruling party in upcoming Huzurabad by-elections,” he declared.

Help or ‘get out of the way,’ Biden says to GOP governors on combatting pandemic