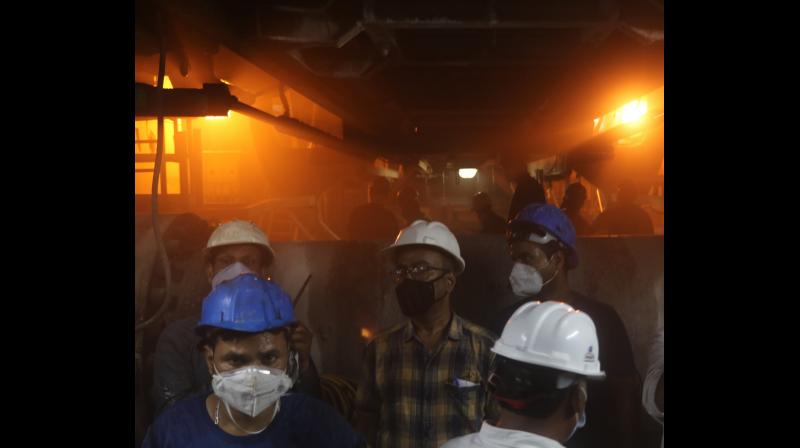 Hyderabad: The recent decision of the Telangana state Cabinet to get the Srisailam Left Bank Canal (SLBC) tunnel works moving again, after a three-year hiatus, appears to have injected a fresh dose of enthusiasm among irrigation department officials overseeing the project, as well as engineers of the Jaypee Group, the company executing the tunnel works.

The tunnel, when completed in about two to two-and-a-half years, will be one of the longest in the world. Tunnel 1 with a length of 43.93km will be the fifth longest tunnel in the world, and the longest irrigation tunnel to have been excavated from only two sides. The tunnel is designed to carry water from the Srisailam reservoir to Nalgonda district with the under-construction Nakkalagandi reservoir, also known as the Dindi balancing reservoir, acting as the receiving station for the water.

Work on the inlet of the tunnel that starts from near Eagalpenta, just a little distance from the Srisailam dam, and the outlet near Angadipet village near Devarakonda in Nalgonda district, began in 2008. However, following technical problems, coupled with some geological challenges and delays in release of funds by the state government, brought the work to a near standstill for three years. Further, power supply was cut by the Telangana Southern Power Distribution Company Limited to the worksite near Srisailam following delays in payment of bills.

The recent Cabinet meeting directed that power supply be restored fully to the project site, and other issues are also being addressed. With power minister G. Jagadish Reddy making a case for resumption of work, the Cabinet agreed that this project needs to be completed and bottle necks should be cleared. The government, in the process, also agreed to revise the project rates. “We are looking forward to going ahead with completing the works now, with our irrigation special chief secretary Rajat Kumar behind the project,” M. Jaganmohan Reddy, executive engineer of the Alimineti Madhav Reddy SLBC Project, said.

While work on the inlet side of the tunnel has come to a halt following heavy seepage, an issue that is being addressed by engineering solutions including pumping of cement and other materials into the rock, progress is being made on the outlet side of the tunnel. “There is almost four feet of water at the head of the tunnel boring machine (TBM) 14 km into the tunnel because of the seepage. Once the surrounding rock is treated, we expect the seepage will be controlled and after dewatering, digging will resume,” Deepak Jain, the project’s deputy general manager from Jaypee Group told Deccan Chronicle, during a visit to the tunnel and the TBM from the Angadipet side.

Jain said that if they manage to make progress of about 1.5 metres per hour, then working from both ends, tunneling through the balance of the 10 km section in about two years, if everything goes without any further hitches.

5th longest tunnel in the world