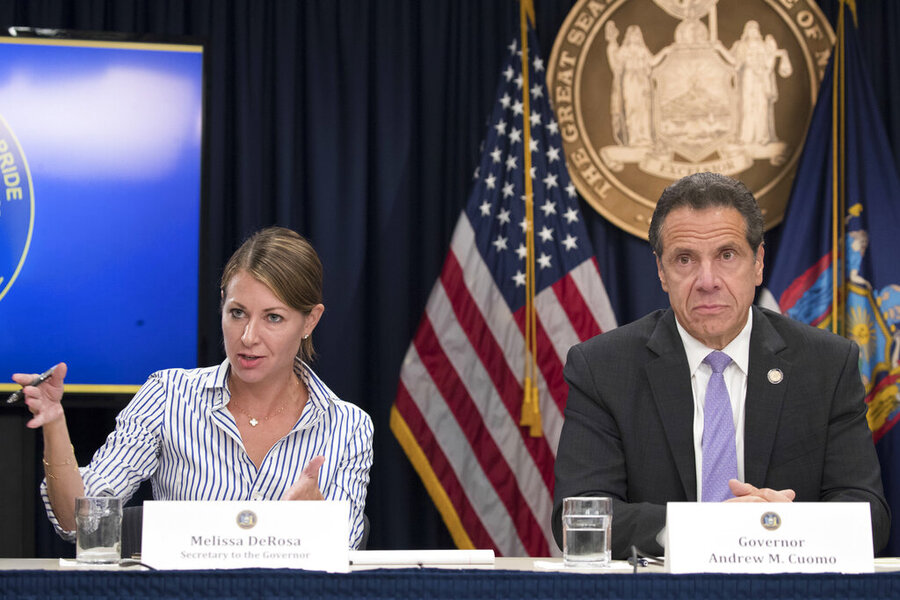 Melissa DeRosa, a fixture next to Gov. Andrew Cuomo for months during his coronavirus news conferences, resigned late Sunday on the heels of a report that found Mr. Cuomo sexually harassed 11 women, leaving the governor without his top aide as he faces the prospect of impeachment.

Ms. DeRosa, who had been one of Mr. Cuomo’s most fierce defenders and strategists, said in a statement sent to multiple news organizations that serving the people of New York had been “the greatest honor of my life.”

But she added: “Personally, the past two years have been emotionally and mentally trying.”

She didn’t give a more specific reason for her resignation.

“I am forever grateful for the opportunity to have worked with such talented and committed colleagues on behalf of our state,” she said.

Ms. DeRosa’s departure comes as Mr. Cuomo has dug in for the fight of his political life despite the threat of criminal investigations and widespread calls for his impeachment.

Scores of Democrats, including President Joe Biden, have urged him to leave office or face an impeachment battle he probably cannot win.

About two-thirds of state Assembly members have already said they favor an impeachment trial if he refuses to resign. Nearly all 63 members of the state Senate have called for Mr. Cuomo to step down or be removed.

More punishing news for the governor came out Monday when an Assembly committee met to discuss possible impeachment proceedings and “CBS This Morning”  broadcast the first TV interview from an executive assistant who accused Mr. Cuomo of groping her breast.

In her first public interview in which she identified herself, Brittany Commisso told CBS and the Times-Union newspaper, of Albany, that what Mr. Cuomo did was a crime and that he “needs to be held accountable.”

Ms. Commisso has said Mr. Cuomo reached under her shirt and fondled her when they were alone in a room at the Executive Mansion last year and on another occasion rubbed her rear end while they posed for a photo. She was the first woman to file a criminal complaint against Mr. Cuomo.

“He broke the law,” she said in an excerpt of an interview scheduled to be aired in full on Monday.

The Associated Press does not identify alleged victims of sexual misconduct unless they speak out publicly, as Ms. Commisso has done.

Mr. Cuomo, who has denied touching any women inappropriately, has largely been holed up in the governor’s mansion since the release of a 168-page report written by two independent attorneys selected by the state attorney general to investigate his behavior.

His lawyers have attacked the credibility and motives of his accusers.

Ms. DeRosa, who often defended Mr. Cuomo when he faced public criticism, had been with the administration since 2013. She got the title “secretary to the governor” in 2017, and was probably the most recognizable face in the administration after Mr. Cuomo.

She appeared by his side in most of his news briefings and often fielded policy questions from reporters when the governor didn’t know enough details to answer.

Ms. DeRosa was mentioned 187 times in the attorney general’s report, which detailed the administration’s efforts to discredit some of his accusers.

The report described Ms. DeRosa as a central figure in his office’s retaliation against one of the women, Lindsay Boylan, after she became the first person to speak out publicly. The administration released internal memos showing that Ms. Boylan had, herself, been the subject of complaints about toxic workplace behavior.

The investigators’ report also revealed some tension between Ms. DeRosa and Mr. Cuomo: She told investigators she was so upset with the way Mr. Cuomo had handled a conversation with one of his accusers, former aide Charlotte Bennett, that she angrily got out of his car when it stopped at a traffic light.

“She told the governor, ‘I can’t believe that this happened. I can’t believe you put yourself in a situation where you would be having any version of this conversation,’” the report said.

The governor’s lawyers have promised what will likely be a drawn-out fight to stay in office, and few see him as willing to quit.

“My sense is from what I’m hearing is he’s still looking for ways to fight this and get his side of the story out,” state Democratic party Chairman Jay Jacobs said in an interview with The AP. But Mr. Jacobs added: “I just think that he’s going to, at some point, see that the political support is just not anywhere near enough to even make an attempt worthwhile.”

Mr. Cuomo’s lawyer, Rita Glavin, told CNN on Saturday that he had no plans to resign.

She called the attorney general’s report “shoddy” and “biased” and “an ambush.”

Dozens of state lawmakers who were once hesitant to call for Mr. Cuomo’s resignation or impeachment told the AP in recent interviews that they were swayed by the heft of the report.

“I think the majority of us feel that the governor is not in a position to lead the state any longer, and that’s not a temporary position,” said Assembly member John McDonald, a Democrat whose district includes Albany.

The Assembly’s judiciary committee met to discuss how to wrap up an ongoing probe of Cuomo’s conduct with women, and of other matters, including the use of staff to help with his $5 million book deal and his administration’s decision to withhold full statistics on COVID-19 deaths in nursing homes from the public.

Assembly Speaker Carl Heastie said he understands demands for his fellow Democrat’s immediate ouster. But Heastie said the public shouldn’t expect an impeachment vote in coming days, because he wants lawmakers to finish going through piles of evidence to consider whether there’s enough to impeach Cuomo over a variety of issues.

“I think it’s been very, very, very clear by this Assembly Majority that there’s no confidence in the governor remaining in office,” Heastie said.

The judiciary committee, which has given Cuomo until Friday to respond to the allegations, will continue to meet in private through at least Aug. 23 to discuss hundreds of thousands of pages of documents and other evidence. Lawmakers plan to have public hearings featuring testimony from experts on sexual harassment and on impeachment procedures, though it’s unclear whether they would call any of the women or other witnesses to testify.

“I’m willing to put money on how soon we see Mr. Cuomo’s face on an attack mailer somewhere in Ohio,” she said.

Lt. Gov. Kathy Hochul would take over for Mr. Cuomo if a majority of the 150-member Assembly votes to impeach him.

Albany County Sheriff Craig Apple said Saturday that Mr. Cuomo could face misdemeanor charges if investigators substantiate Ms. Commisso’s complaint. At least five district attorneys have asked for materials from the attorney general’s inquiry to see if any of the allegations could result in criminal charges.

Students can transfer schools to avoid COVID-19 ‘harassment’ like mask mandates, Florida’s board of education says