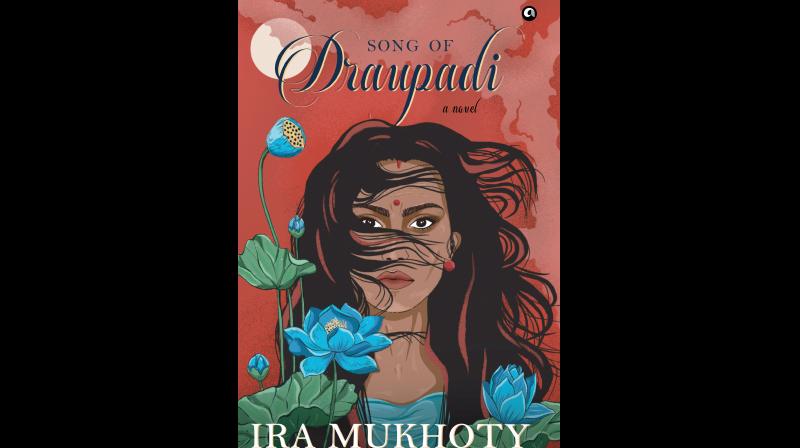 The epic Mahabharata is known for its Gods, superheroes and great battles. However, the stories of its women are often forgotten. Many of them appear in Song of Draupadi by Ira Mukhoty – the indomitable Satyavati, the otherworldly Ganga, the indestructible Kunti and the tenacious Gandhari. But it is the passionate and fiery Draupadi who dominates the book.

Talking about her inspiration for the book, Ira says, “About a decade ago, I was looking for female characters from Indian history/mythology to inspire my two young daughters. Everything I came across was problematic in some way. The Ramayana, especially, was unsettling because of the way in which Sita is portrayed – as an overly acquiescent, submissive and perfect ‘pativrata’. I knew there had to be more behind the stories we were being force-fed by popular TV serials and books.” And then she discovered that the Mahabharata was much more complex than she had thought, with a far greater range of women’s voices to explore. “Song of Draupadi looks at the way in which about ten women characters from the Mahabharata shaped their destinies and the trajectory of this famous epic, in ways that have often been effaced over time,” the author says.
A lot of work went into the writing of the book. “Like I do for my historical non-fiction books, I did a lot of research to understand cultural and material life in ancient India. I wanted the world of the Mahabharata to feel as textured and real to the 21st Century reader as a book set in modern times. So I read about the geographical conditions of ancient India, the fauna and the flora, the food habits, the clothes, the ornaments, the medicines, the rituals, and the sacrifices that would have formed such an integral part of life at the time of the great epics,” reveals Ira. She also read many translations of the Mahabharata in English and interpretations by modern scholars, especially feminist readings of the text. Iravati Karve’s Yuganta was a huge inspiration, she says.

“Draupadi appeals to me. Her voice and her message resonate most strongly with me, now in the 21st Century. She is one of the rare women in the epics to clearly express anger, and I think that is important, compared to the plethora of female voices who are quiet or acquiescent, even in the face of grave male injustice. So I believe that Draupadi’s message of taking control of one’s own destiny, and understanding the fatal limitations of male protection, is of utmost importance to young women in India today,” asserts Ira.

She also took care not to let the prejudices and mindsets of the 21st Century colour the lives  lived in the period she is writing about. “It is a necessary exercise to try and leave aside our judgemental minds and look at these lives with as much sympathy and clear reason as possible, so that we are not shaping a narrative to suit our own,” explains Ira.

“For 5000 years now the pendulum [of gender parity] has swung away from women, since the superior physical strength of men gave them a huge advantage. Men got to fight the battles and also got to be the recorders of those battles, placing the importance of battles, of land acquisition, of subjugation of people, above the importance of other skills such as nurturing, language, music,” says Ira. “So we have seen degradation in the condition of women in Indian society.” In the early Vedic times, women had relative freedom; but these freedoms were progressively undermined through the age of the epics and on till the early modern era, when a number of evils such as child marriage, ostracism of widows, denial of education for girls etc became a blight on our society, she notes, adding, “Now, in the 21st Century, the pendulum seems to have stalled – people are taking stock of all the injustice that has been the lot of women, and important conversations are finally taking place to redress this imbalance. But this is just a beginning.”

Talking of the timeframe of work, Ira says, “I did not have any actual deadline, so my research process took years. Perhaps 2-3 years of just understanding the great idea of the Mahabharata text. Once I had the ideas very clearly etched in my mind, the actual writing took about six months. So this book had the longest gestation time of all my books so far.”

On her own preferences on reading material, Ira says she loves both non-fiction and fiction. “I chose a mix of both, though I do tend to favour literary fiction for relaxation because so much of my working life revolves around reading non-fiction.”
Ira is working on a book on the late 18th Century in Awadh, and the French players in the grand tapestry of the story of the Nawabs and Begums of Faizabad and Lucknow.

Body shaming is a NO

Never too late to start