Greetings, homemade radio amateurs!
As a part of almost any electrical appliance, there will be elements that ensure its switching on and off – most often these are toggle switches or various buttons, the change of position of which leads to the switching on or off of the device. In this case, the design of the switch will directly depend on what power the switched device has – for example, if it is a powerful electric heater operating from a 220V network, then the switch must be appropriate, which affects its dimensions. A large enclosure is required to provide a large switching contact area and good insulation, so network switches usually take up a lot of space. Sometimes it becomes necessary to control a powerful load through a small low-current switch located, for example, on the control panel of the device. Here electromagnetic relays come to the rescue, inside their case they contain a group of high-current contacts, which controls by pulling in and pulling out the solenoid rod. The solenoid coil, in turn, consumes a small current and can be switched without any problems even with a small small button. With all this, small low-current buttons can be either latching or non-latching – if a non-latching button is used with the relay, the load will turn off when the button is released. Meanwhile, it is the momentary buttons (tactical or tactile) that are most often used in various devices, since they take up little space and can be embedded anywhere.
For switching powerful devices using a small momentary button, the diagram below was developed. This can be useful, first of all, in those devices that contain a power supply with standby voltage, since the circuit must be connected to the power supply all the time, disconnecting it from the power supply will make it impossible to turn on the main load. For example, it can be laboratory power supplies, amplifiers, soldering stations and much more.

The basis of the circuit is a logic microcircuit D-trigger K155TM2, you can also use K555TM2, fortunately, now domestic logic microcircuits are found in any store of radio components and cost mere pennies. In this circuit, switching the level (high or low, that is, on or off) at the output of the microcircuit is carried out by pulling the 3rd pin of the microcircuit to the power supply plus. This pin controls the transistor VT1, and by default, when the button is not pressed, this transistor is open (thanks to the resistor R1) and pulls the 3rd pin to ground. When the button is pressed, the base of the transistor is connected to the emitter, the transistor closes and the 3rd pin of the microcircuit is pulled up to the plus of the power supply through the resistor R2 – the output level is switched. With the next short press on the button, the output level changes again to the opposite, and so on in a circle. The microcircuit is powered by a voltage of 5V, which is created on a parametric stabilizer (transistor VT2) using a 5V zener diode. Any zener diode with a stabilization voltage of 5V can be used here. The output level of the microcircuit is removed from the 5th pin and goes to the base of the VT3 transistor, this transistor, in turn, switches the relay winding, supplying or de-energizing it. An LED parallel to the relay indicates the state of the relay – the LED is on, it means the relay is on, the resistor R6 in the diagram is marked with an asterisk, since by changing its value you can change the brightness of the LED. The VD2 diode serves to protect the transistor from self-induction emissions of the relay winding; KD522 or 1N4148 are suitable here. All the indicated ratings on the diagrams can be deviated by 20-30 percent up or down from the indicated ones, so if there is no resistor of the required resistance at hand, it is allowed to put the closest one.
There is such a thing as contact bounce. The fact is that when the contacts are mechanically closed or opened inside any button, it is not ideal and instantaneous. At the moment of closure within a few fractions of a second, the contacts can first close a little, then open, then close-open again, and such jumps occur at the moment of touching two metal contacts before they are tightly pressed together by the design of the button. Despite the fact that these processes proceed very quickly and we simply do not notice them with our eyes, the circuit can be sensitive to contact bounce and at the moment the button is pressed, several trigger switching cycles can occur.
Various buttons may “rattle” to a greater or lesser extent, for example, the buttons below are subject to strong bounce and are not recommended for use with this scheme.
The most successful in terms of contact bounce are tact (tactile) buttons, when you press them with your finger, you feel a clear click. An example of such a button is below.
If, after assembly, the circuit still reacts unstably to pressing due to bounce, the author suggests adding a capacitor of 100-330 nF parallel to resistor R1, which will significantly reduce the effect of bounce. The exact value of the capacitor is selected experimentally.
Almost any relay is suitable for use in the circuit. They can differ in the maximum power of the switched load (current through the contacts), as well as in the operating voltage of the winding. The most common relays with a winding of 3.3V, 5, 12, 24V, you should choose depending on what voltage the circuit will be powered from, the best option would be 12V, as in the diagram. Moreover, if a 5-volt relay is used, then the supply voltage can be applied directly to the circuit, excluding the parametric stabilizer. The entire circuit is assembled on a printed circuit board, while the relay itself is installed on the board. The contacts for connecting the load are installed on the board in the form of screw terminal blocks, please note that they must correspond to the power of the connected load. Power is also supplied to the board through the terminal blocks, and the button displays on the wires. 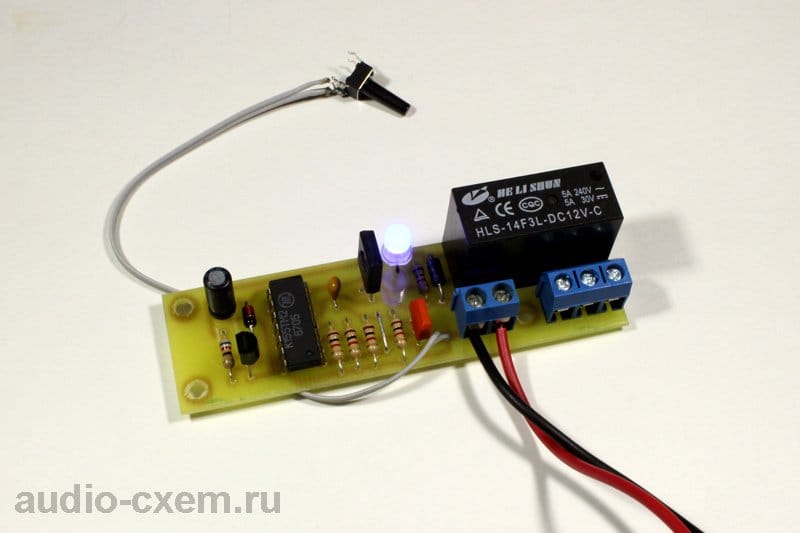 The current consumption of the circuit when the relay is de-energized is 35 mA, with the relay on, about 100 mA (varies depending on the relay used). Happy build!

A simple utility table for an artist's home workshop