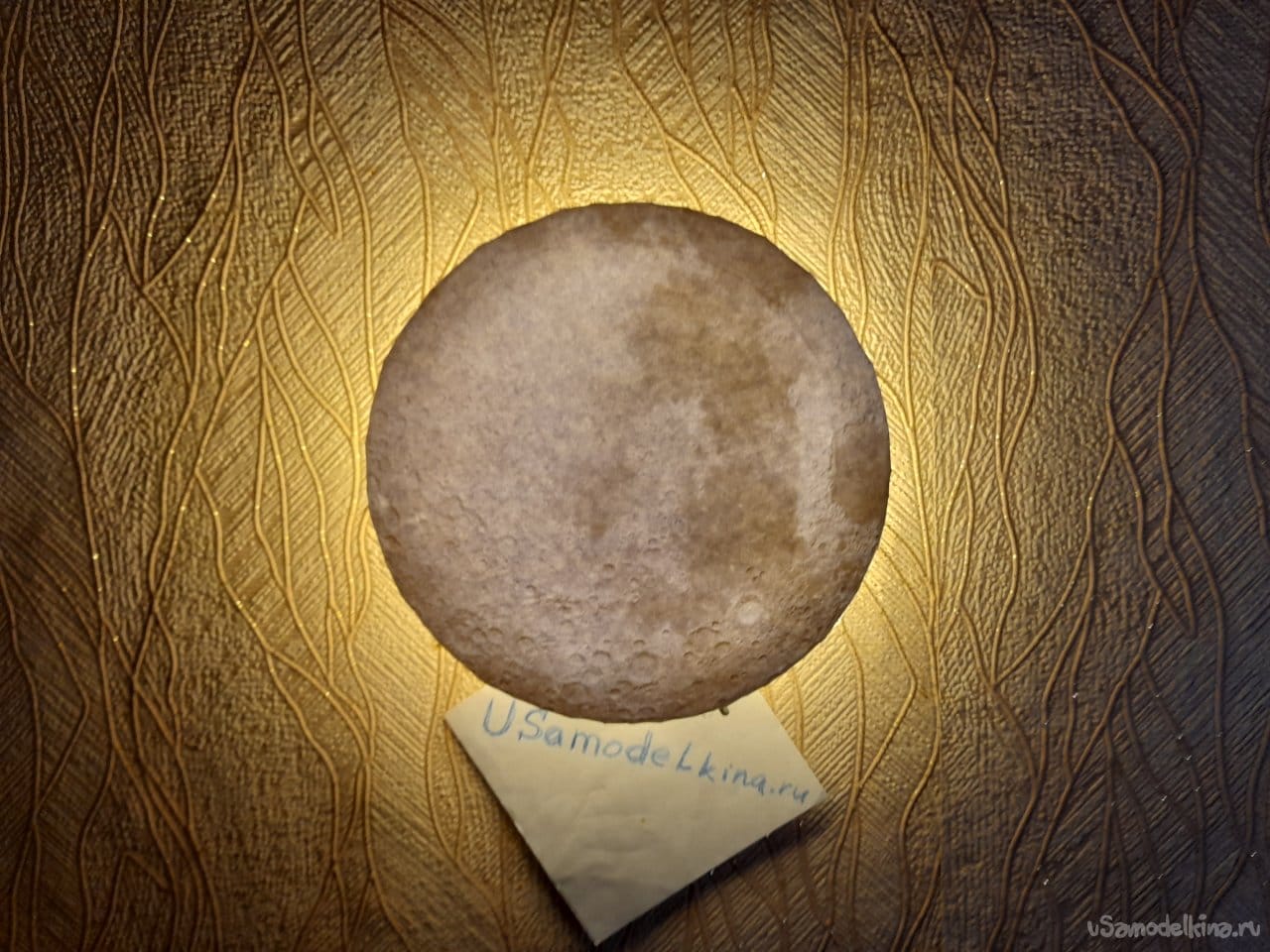 Hi everyone. I have a little daughter who sleeps alone in a separate room and has to use night lights. When the next bought night light ordered to live a long time (and this happened according to the law of meanness during the preparation of the child for bed), I had to whip up an improvised night light from a phone charger and a pair of LEDs, covering all this stuff with a picture of my daughter so that the light was more diffused and not so bright. The law of meanness still worked – at night the lights were turned off a couple of times, something happened to the transformer at the substation, or something like that.
Before that, there were three nightlights, the most convenient was in the shape of the moon, and the size and brightness were optimal, but it turned out to be the most dangerous – fragile and too clever with the circuit, the body melted. Other lamps burned out silently, without effects, while maintaining the integrity of the hulls, but they were of no quality in terms of the quality of lighting, so he did not restore them. In short, I decided not to buy a nightlight yet, but to modify a self-made one, especially since everything I need at home is available. Let the homemade night light be the moon.
I took a plastic jar from under the herring (of course, I washed it well with dishwashing detergent and dried it). 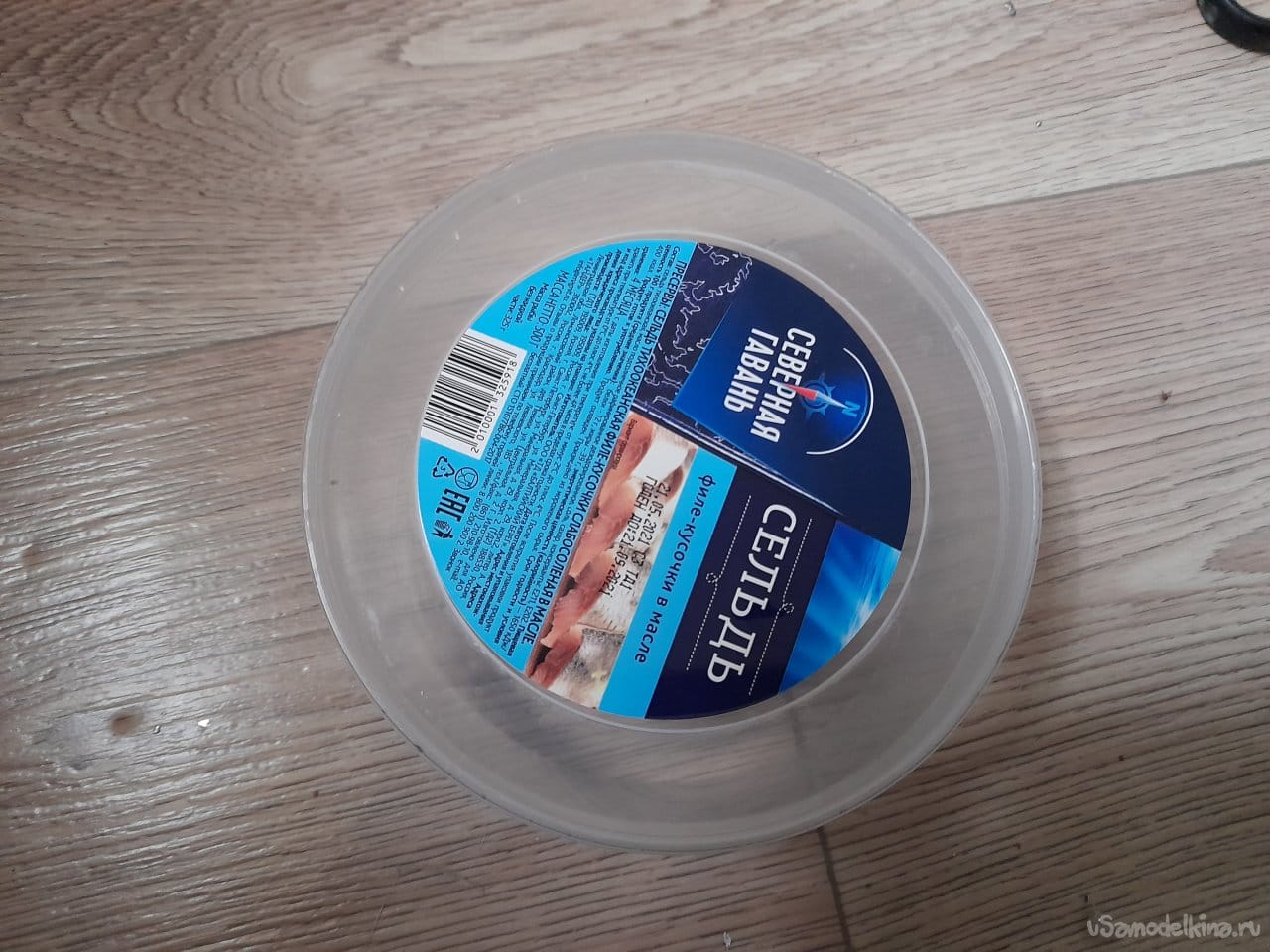 I made two holes on the side for the power socket and a toggle switch. 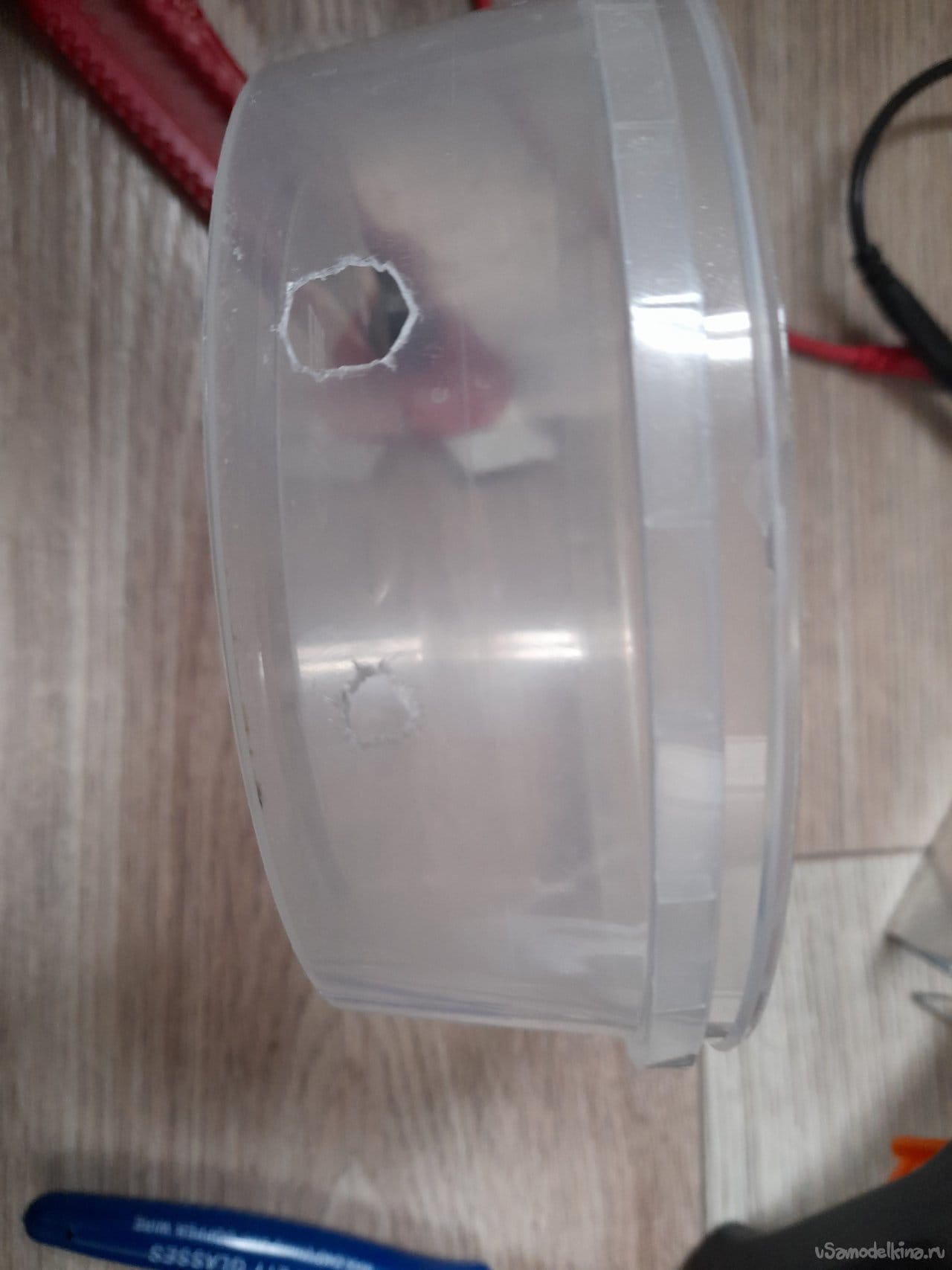 The power socket of the TP 4056 module is very unreliable, in the very near future the plug will not hold in it, so I put a 5mm socket, soldering it to the corresponding module terminals. You will need another piece of LED strip, 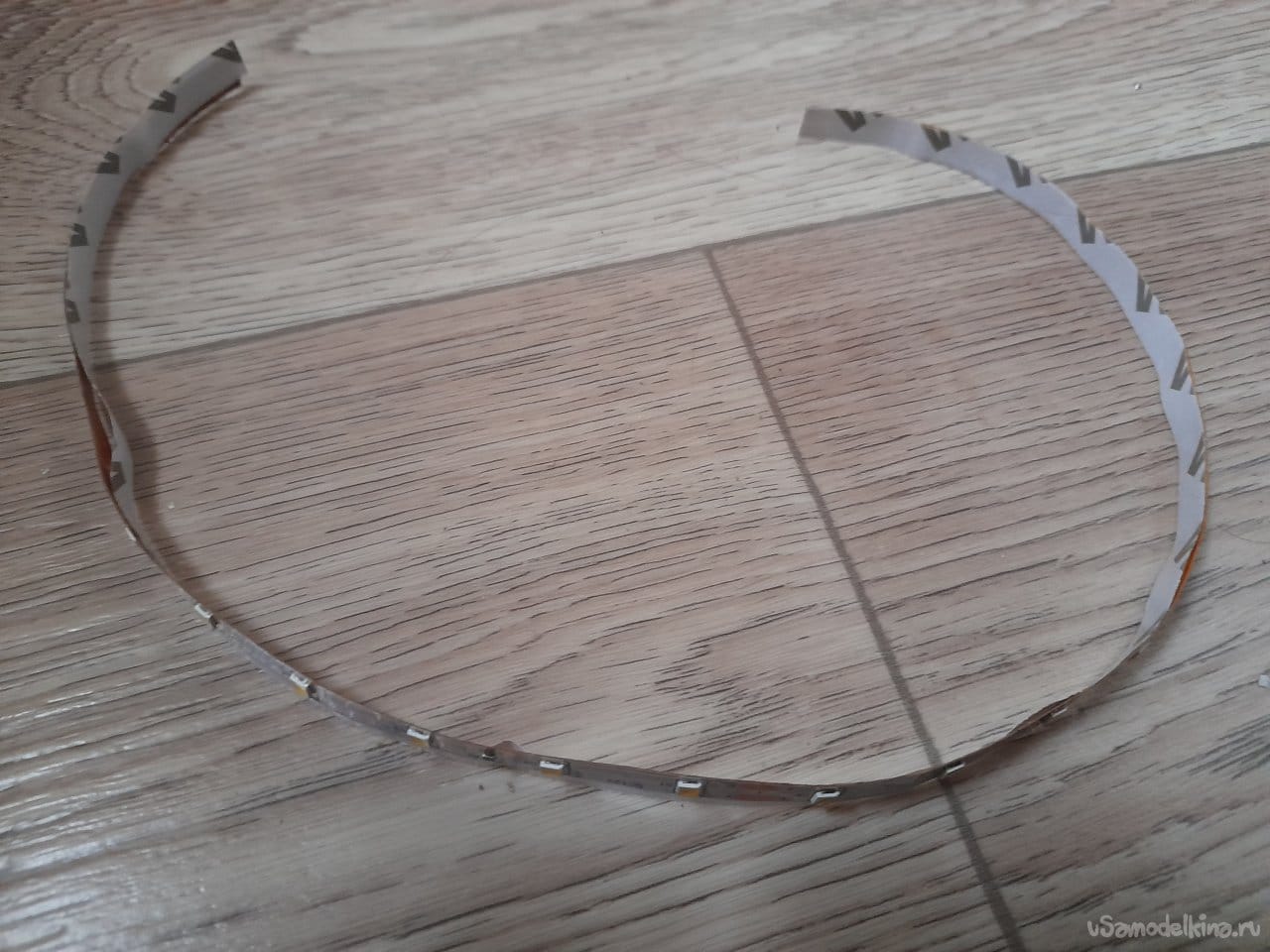 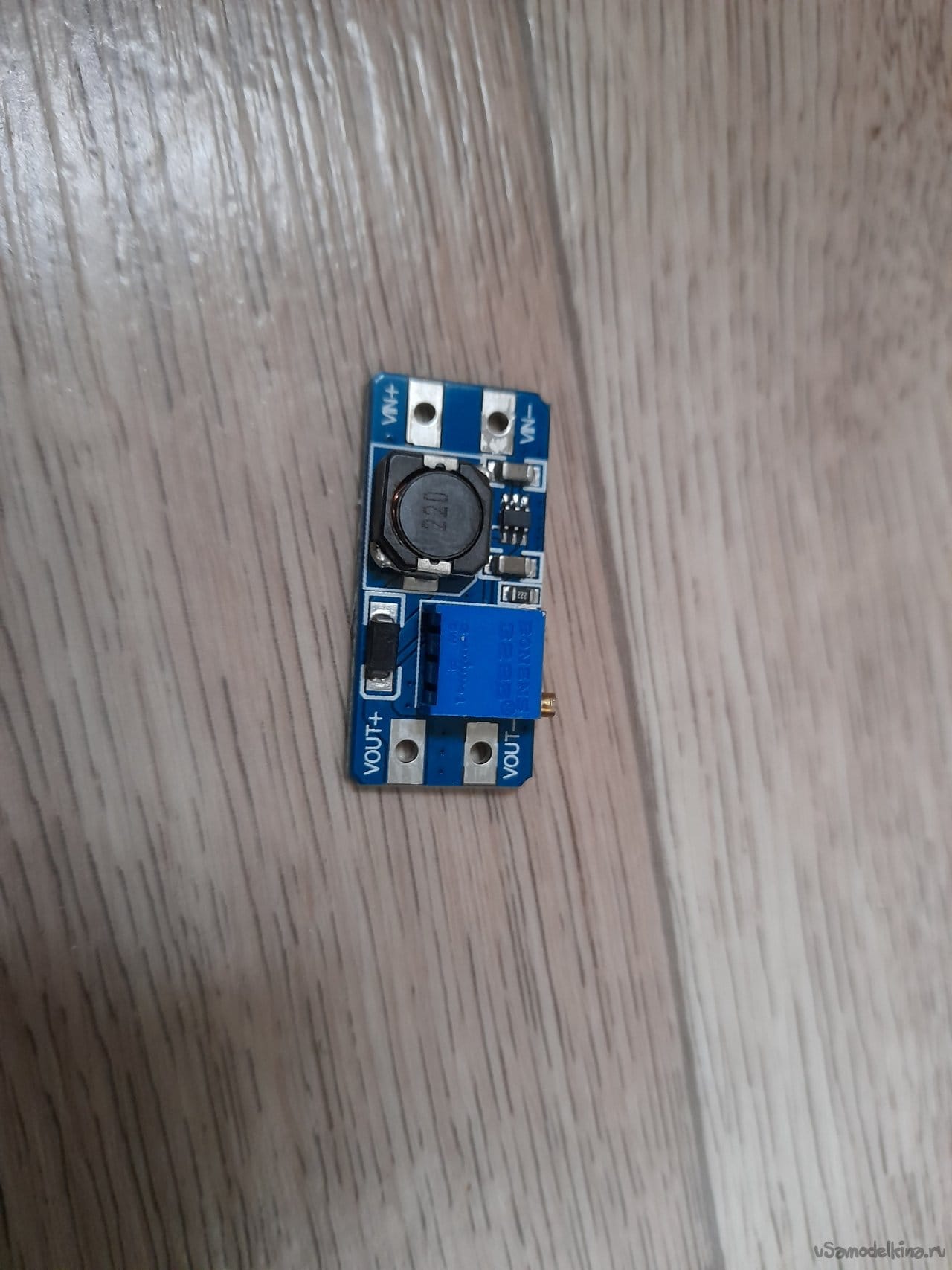 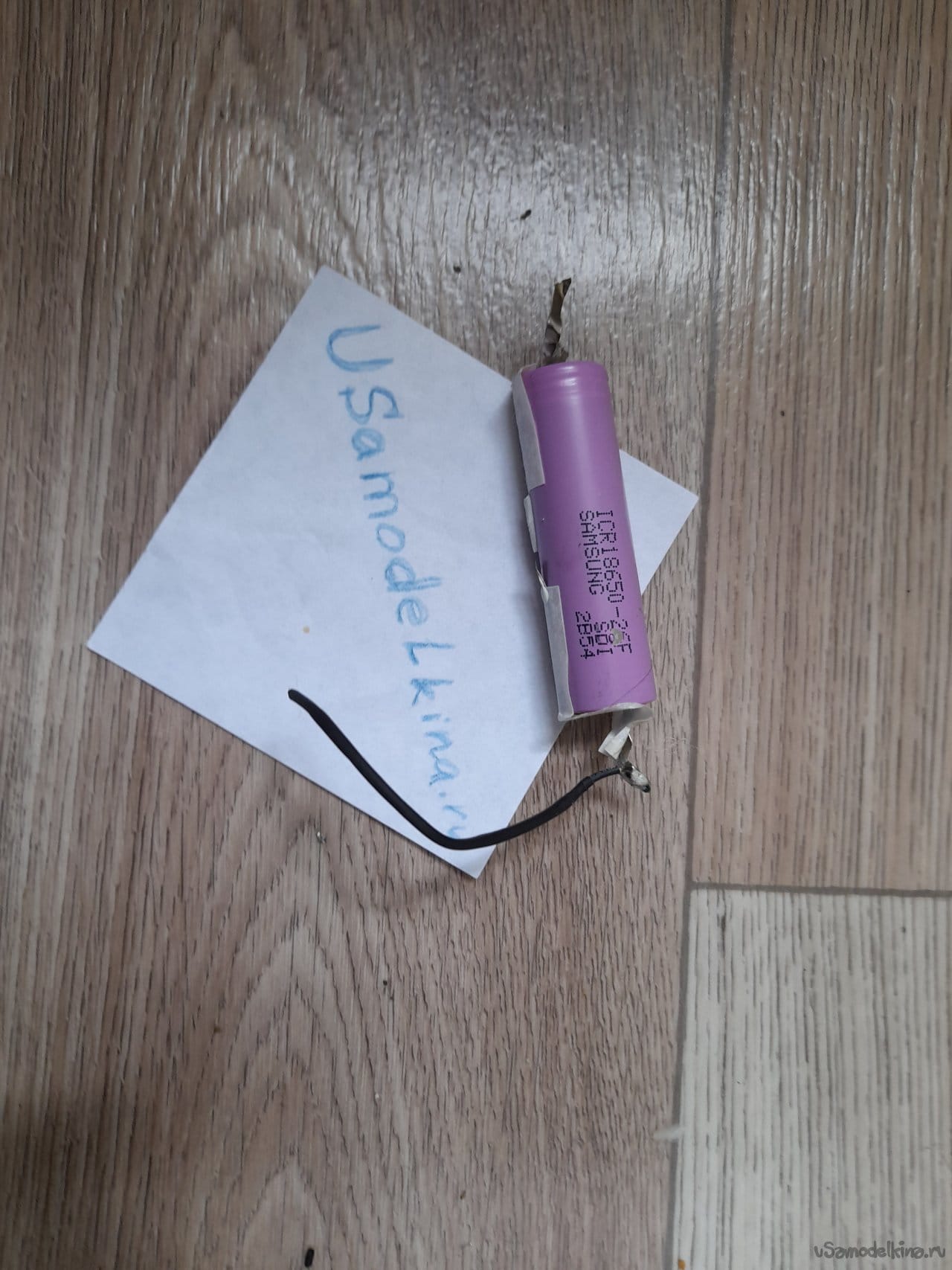 Module, converter and battery in case the lights are turned off at night. I preferred the LED strip to separate LEDs because of a more uniform distribution of light, since for single LEDs it would be necessary to muddy the collimators, or somehow scatter their light without losing brightness. And it's easier to attach the tape. I assembled the entire circuit without tape and without installation in the case, I connected it. At the output, the voltmeter showed almost 15V, I had to set 12.5V as the initial voltage. 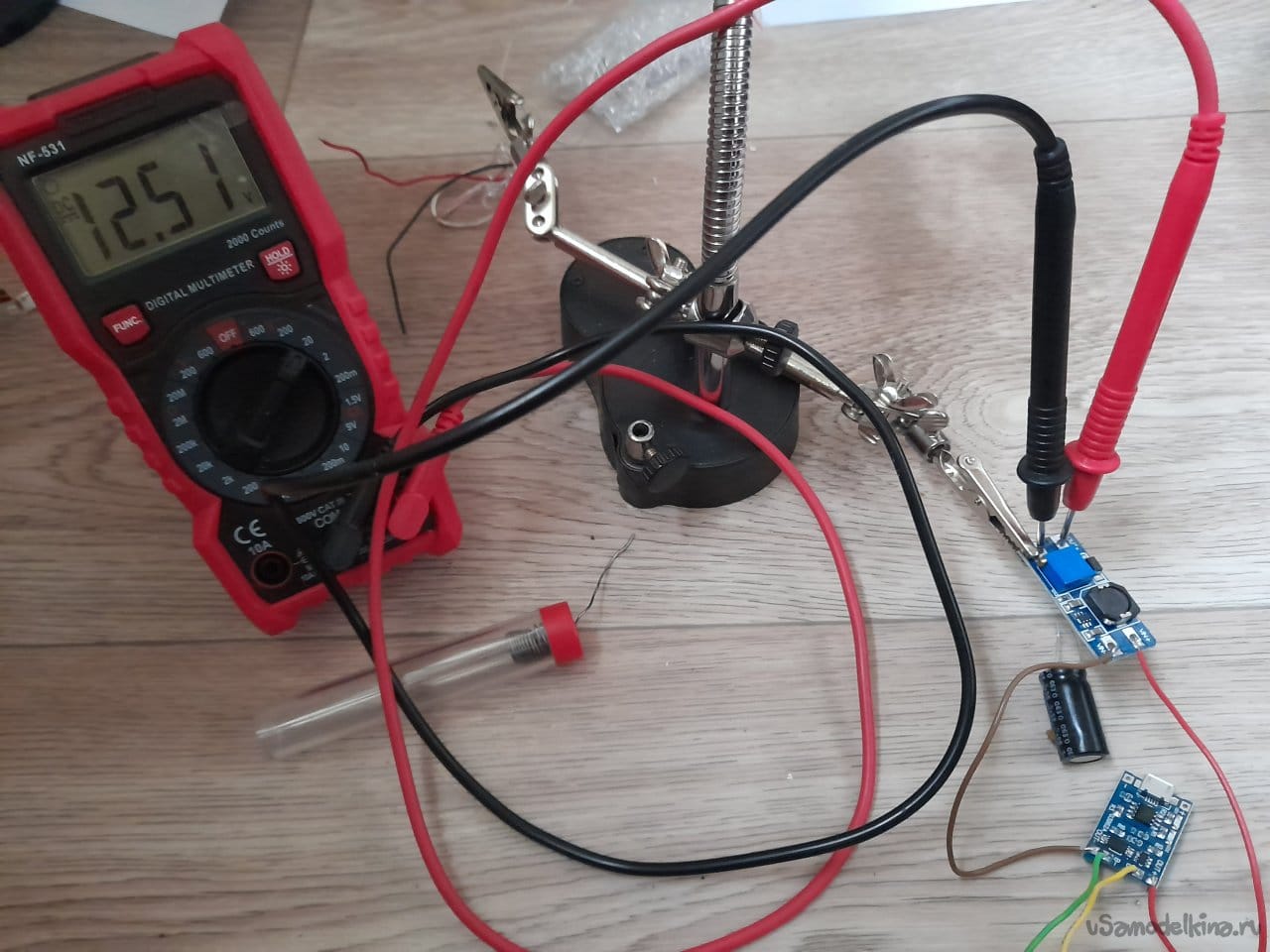 After installing the toggle switch and socket 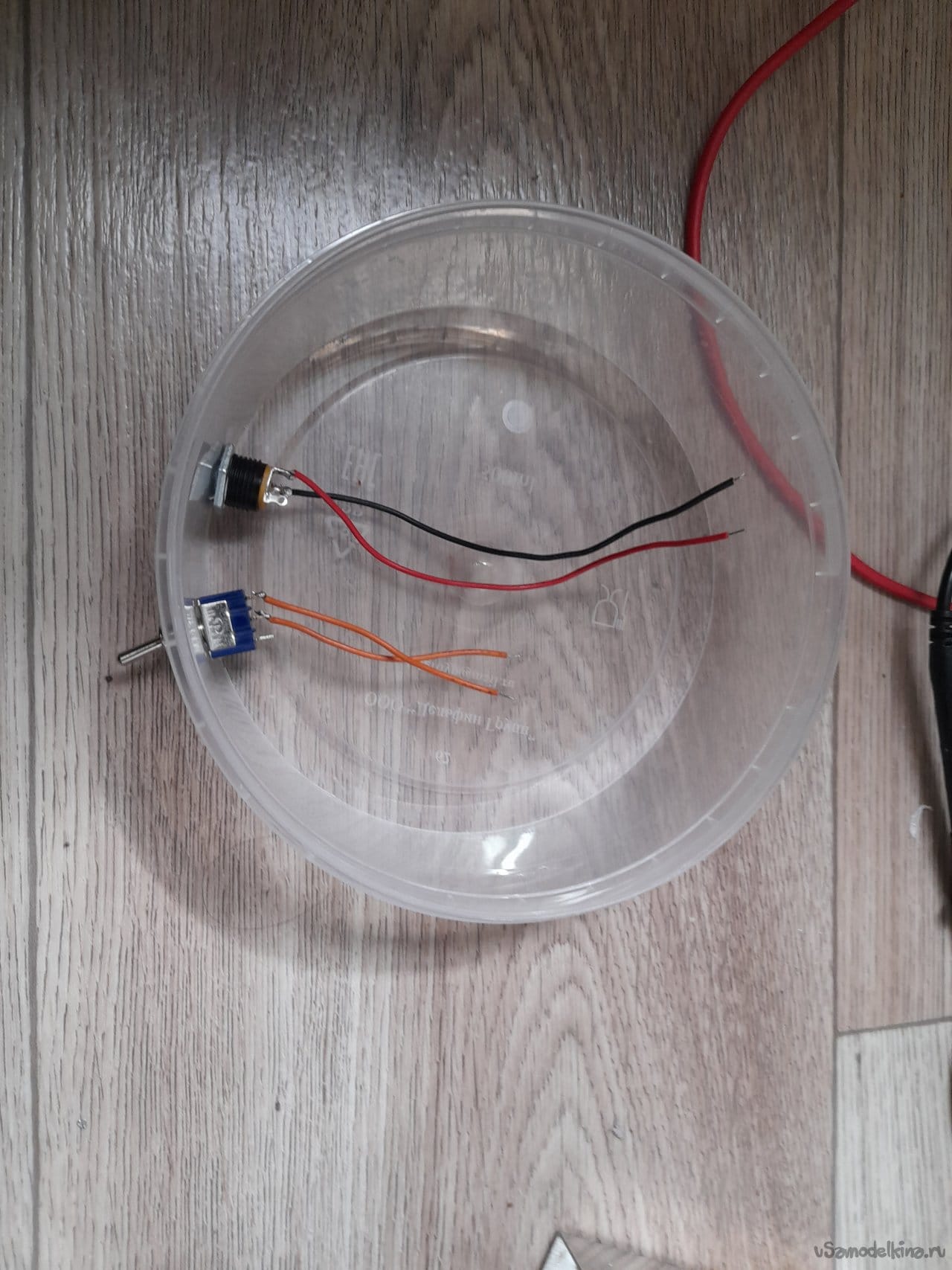 glued the LED strip to the walls of the can from the inside. 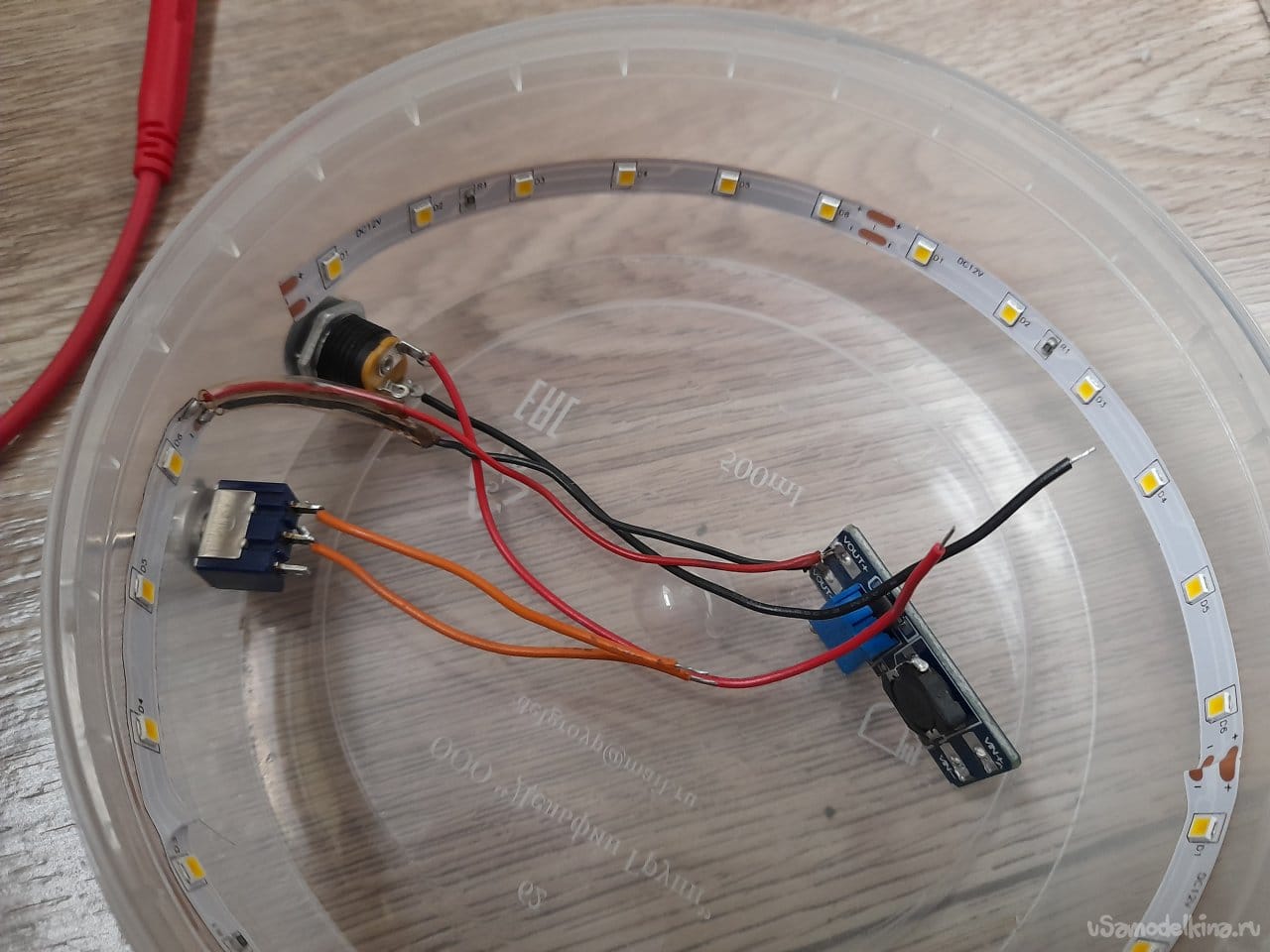 Soldered all the boards into place. 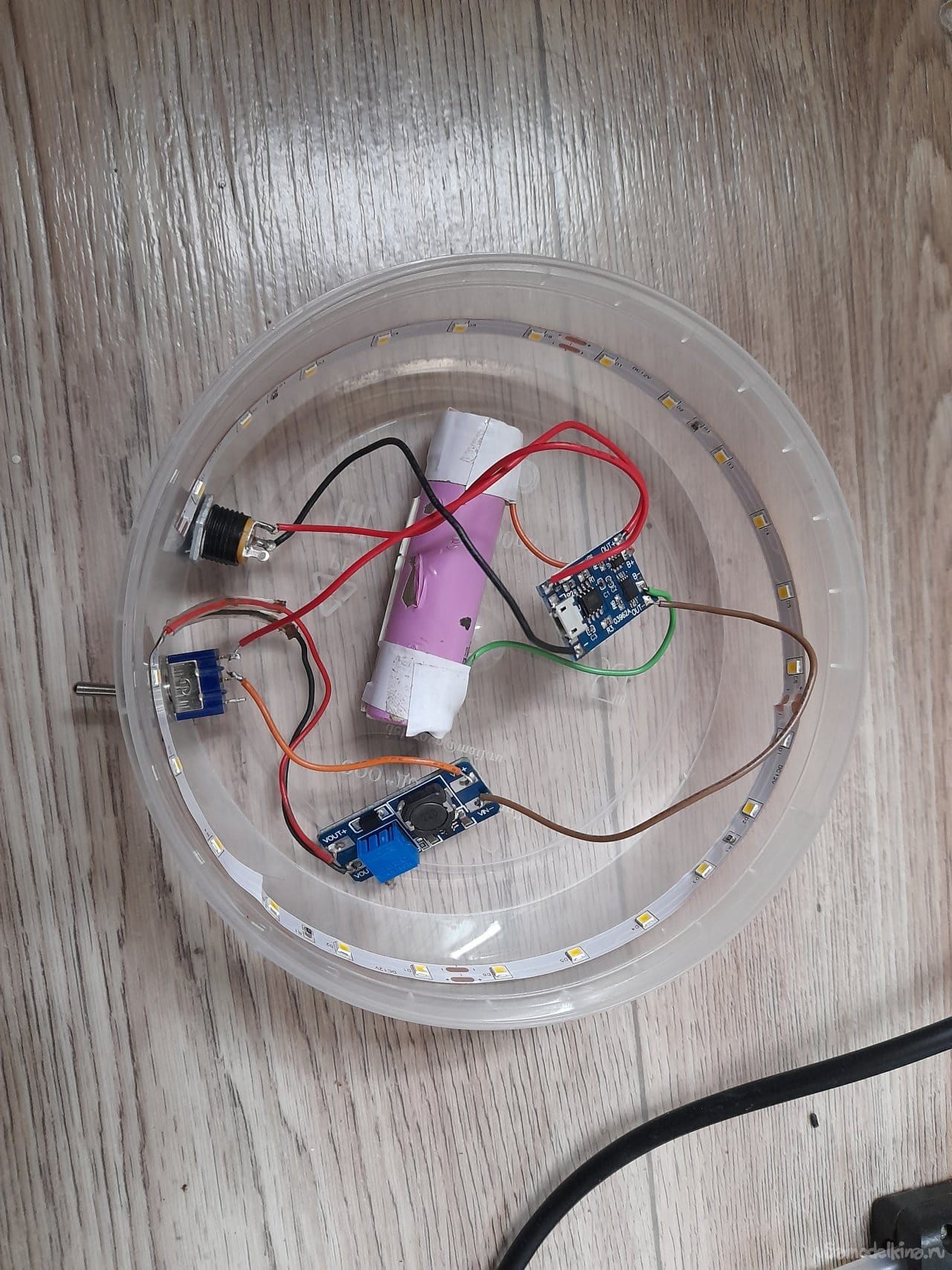 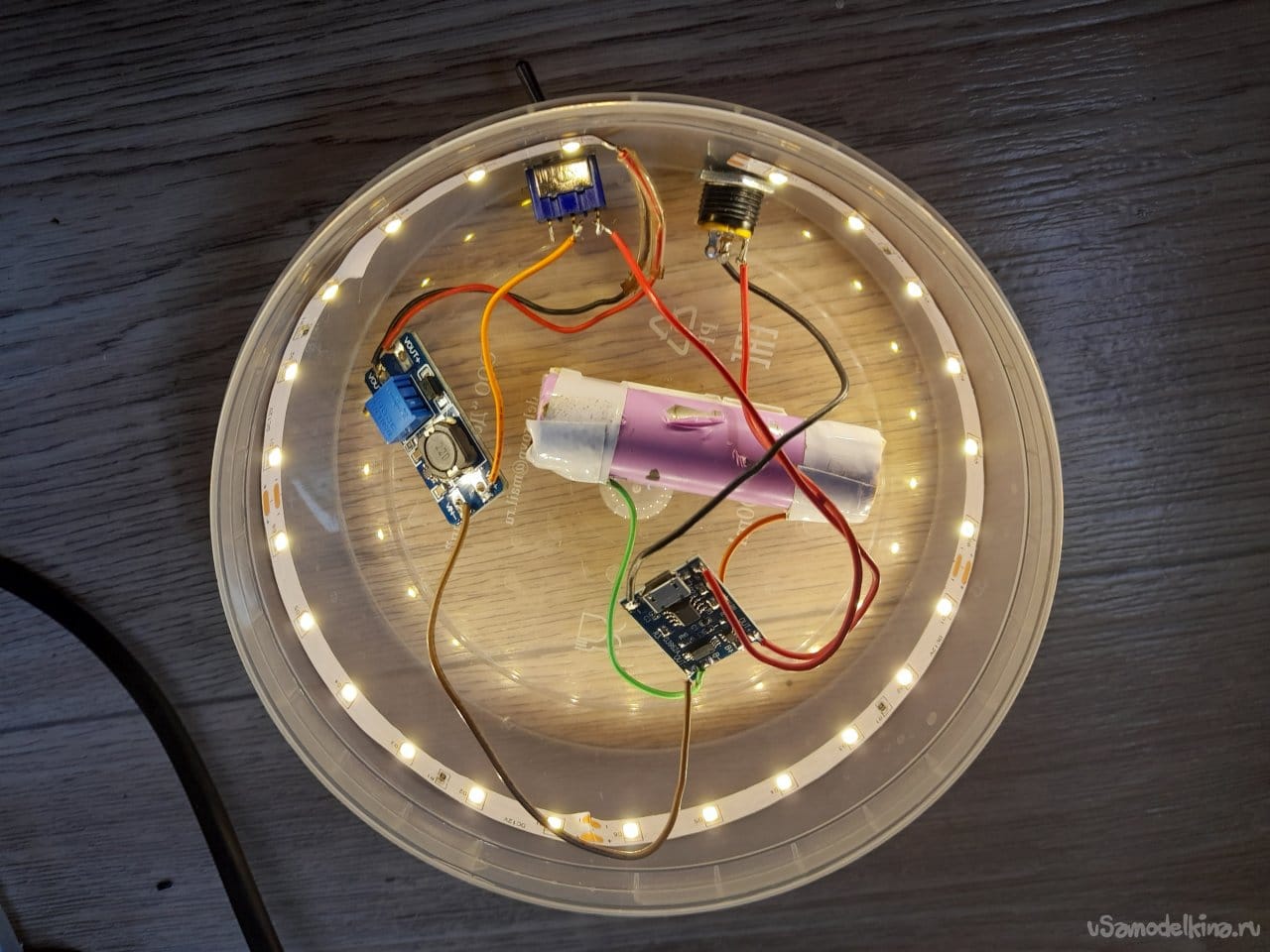 Everything works as it should, so you can fix the components with hot melt glue and adjust the output voltage (reduced by eye, to a comfortable LED strip glow). 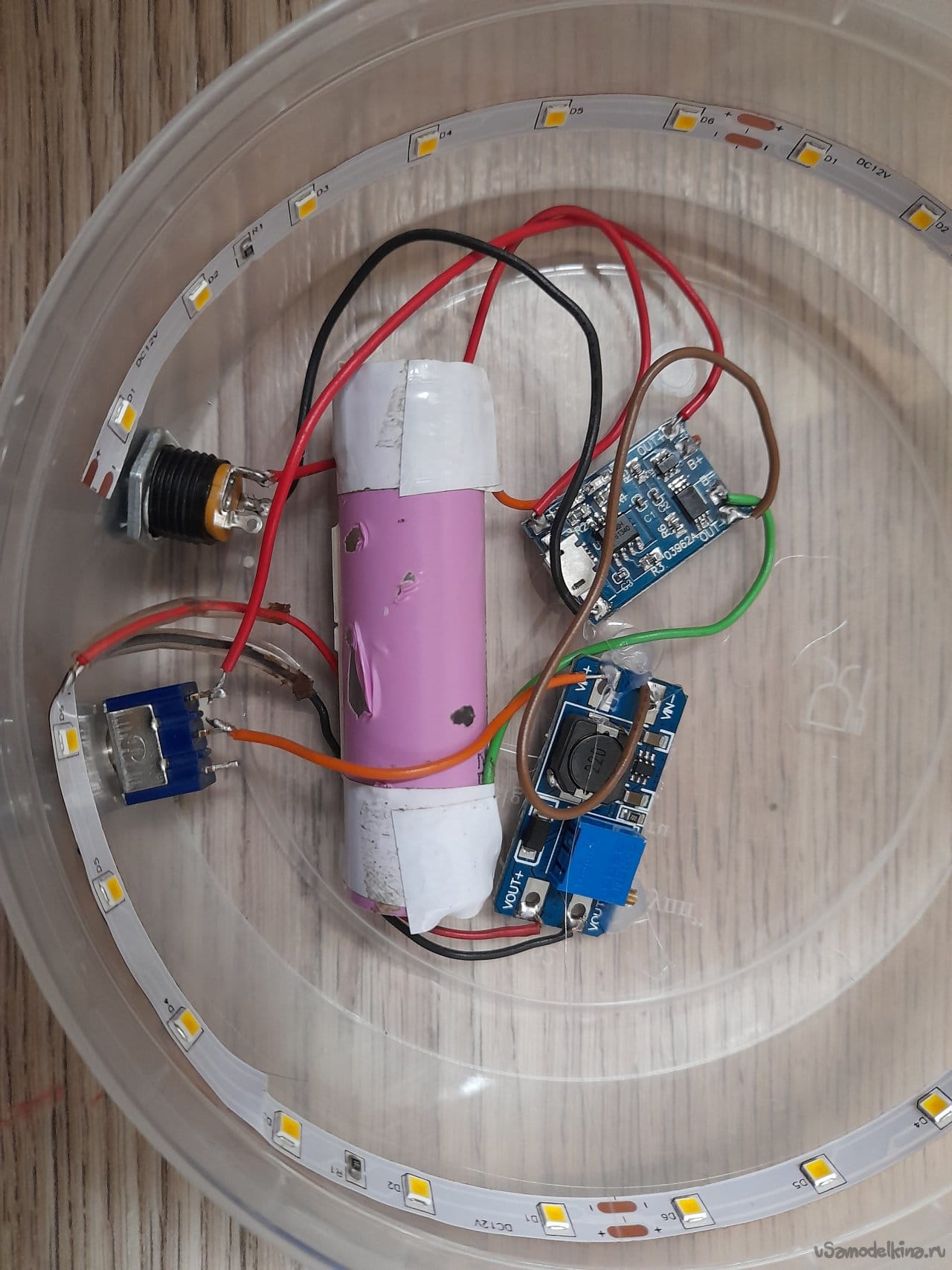 Made a cable with a 5mm plug specially for this lamp 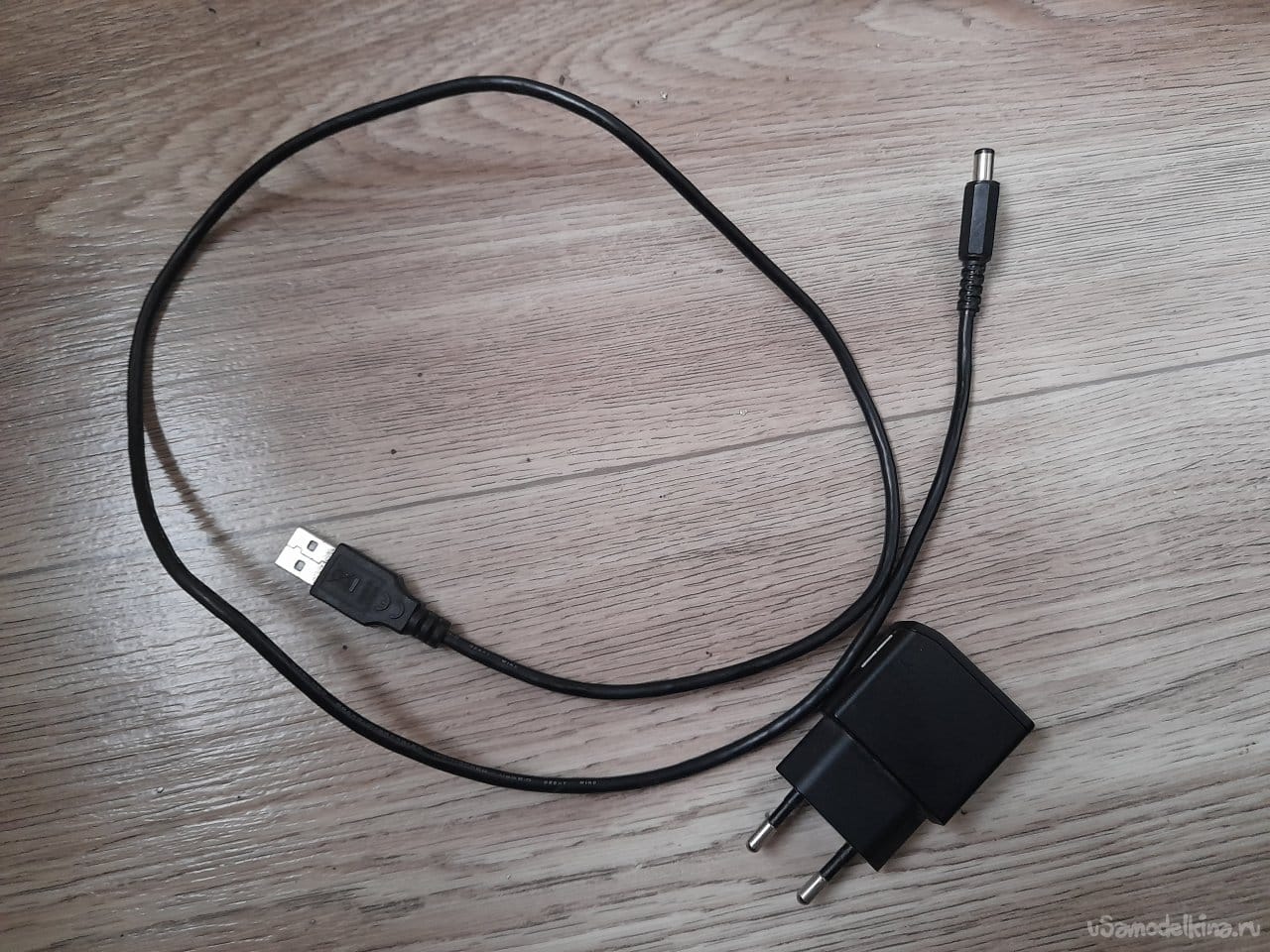 I left the most tedious process for later, and this “later” came. It was necessary to find and download a high-quality photo of the moon. Found, downloaded. Printed on paper with a density of 180g/m2, 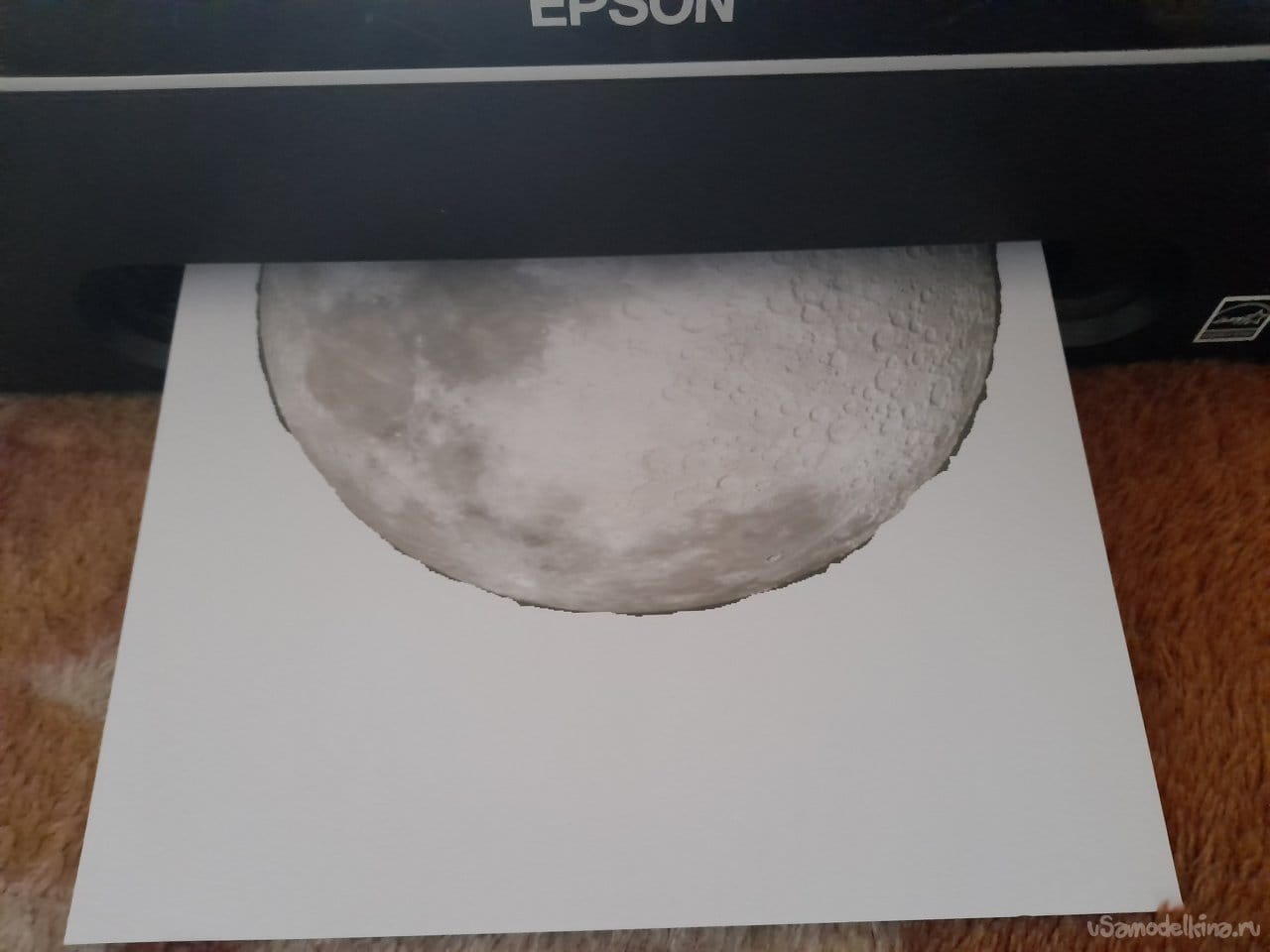 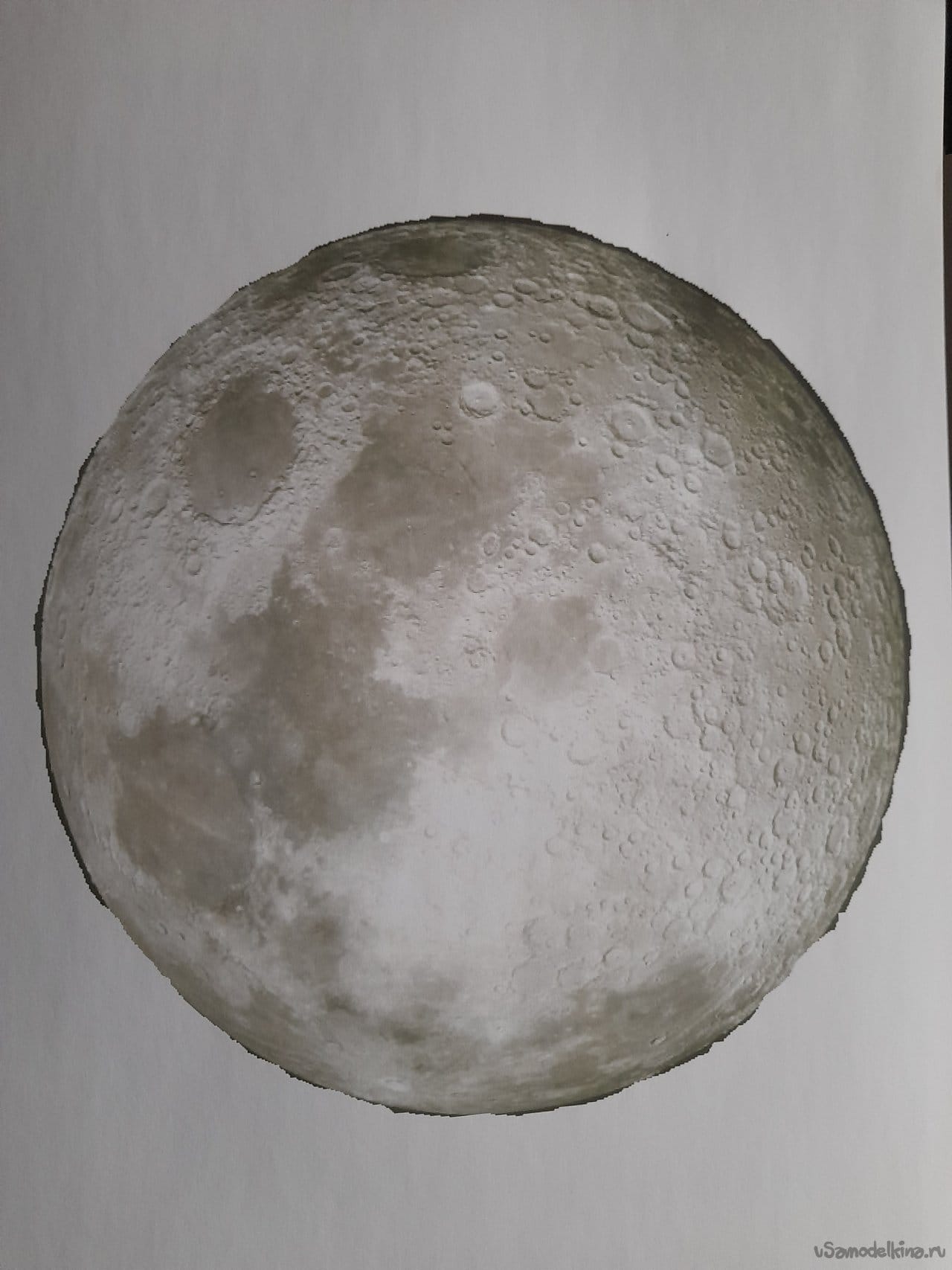 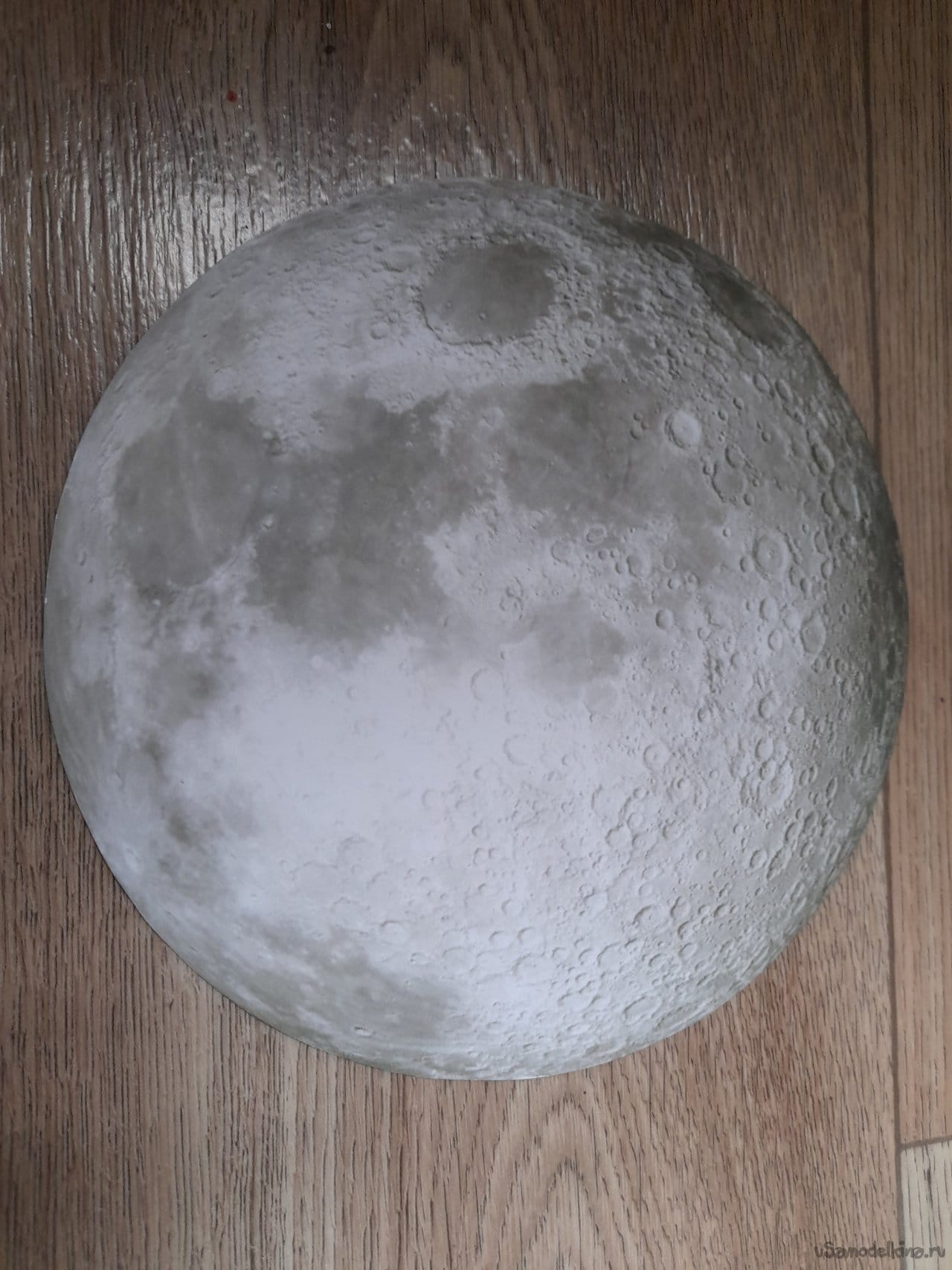 Now you need to somehow stick it on the lid of the can. Yes, the lunatics will forgive me, but I had to reduce the moon a little, cutting off several hundred thousand hectares and making it a little larger than the diameter of the lid. I made small cuts along the edge with scissors and glued them with hot glue around the perimeter. 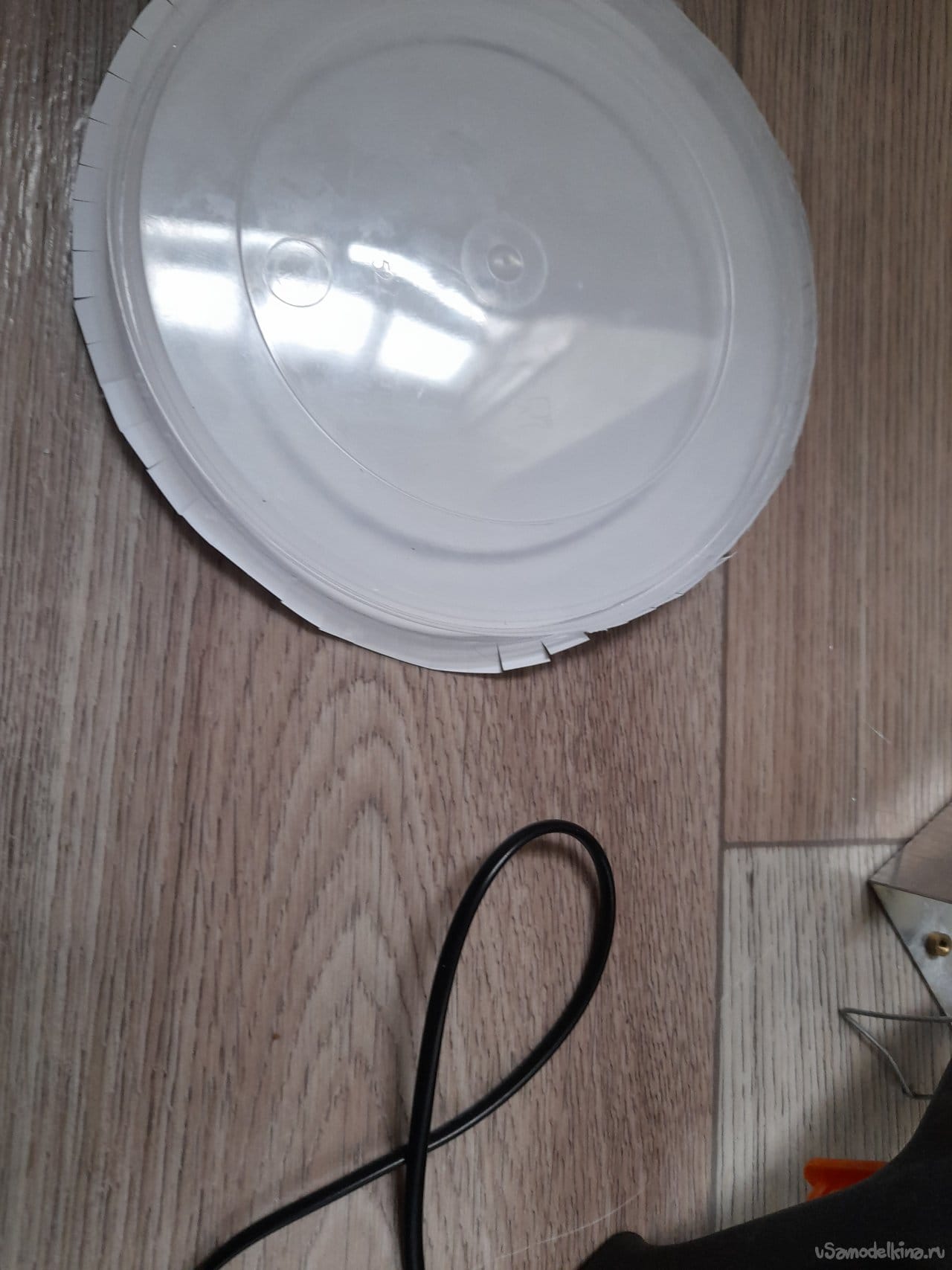 I closed the jar with a lid with the image of the moon and that's it – the night light is ready.
I glued the lamp to the wall on a double-sided scotch tape 3M. 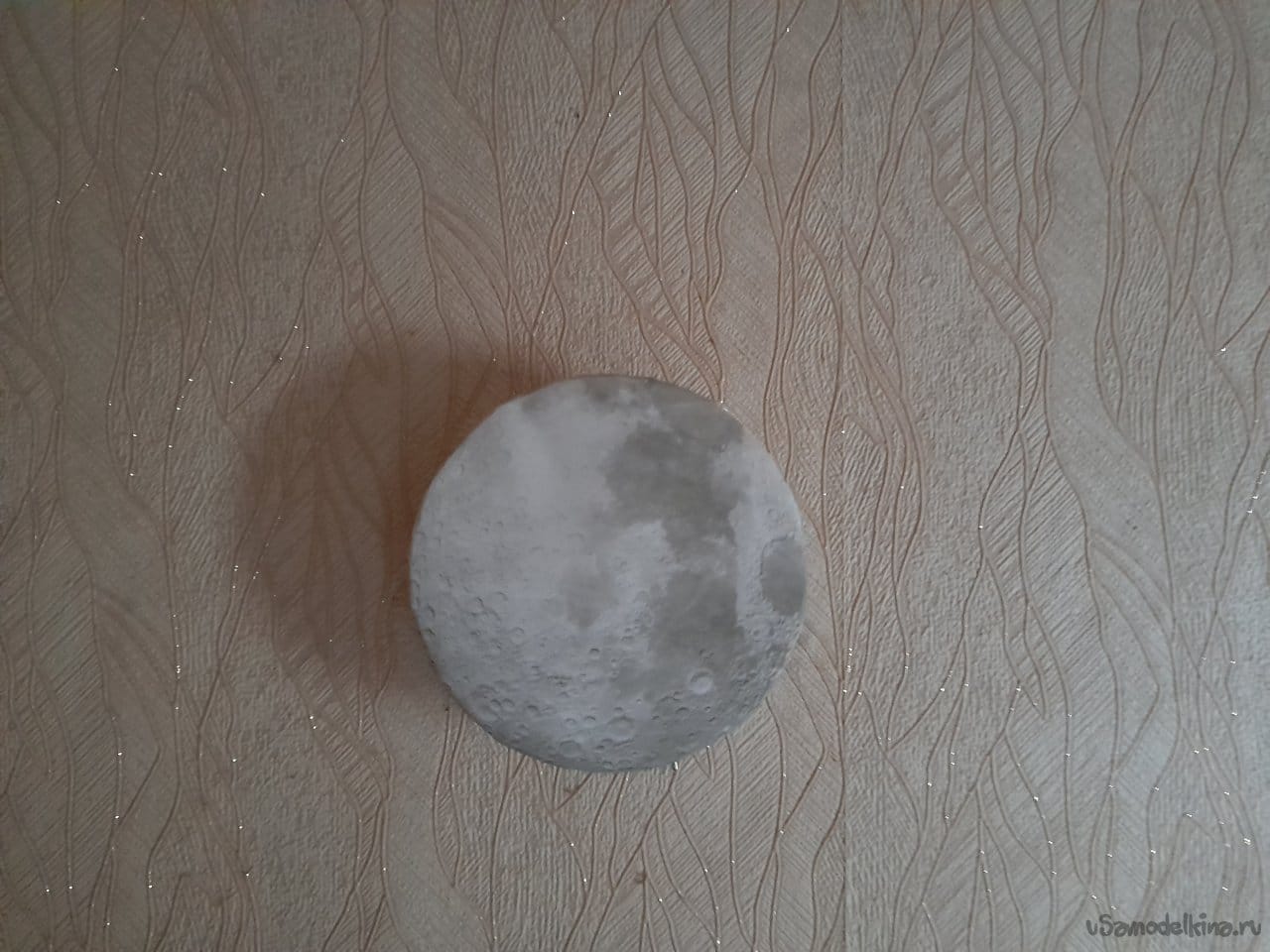 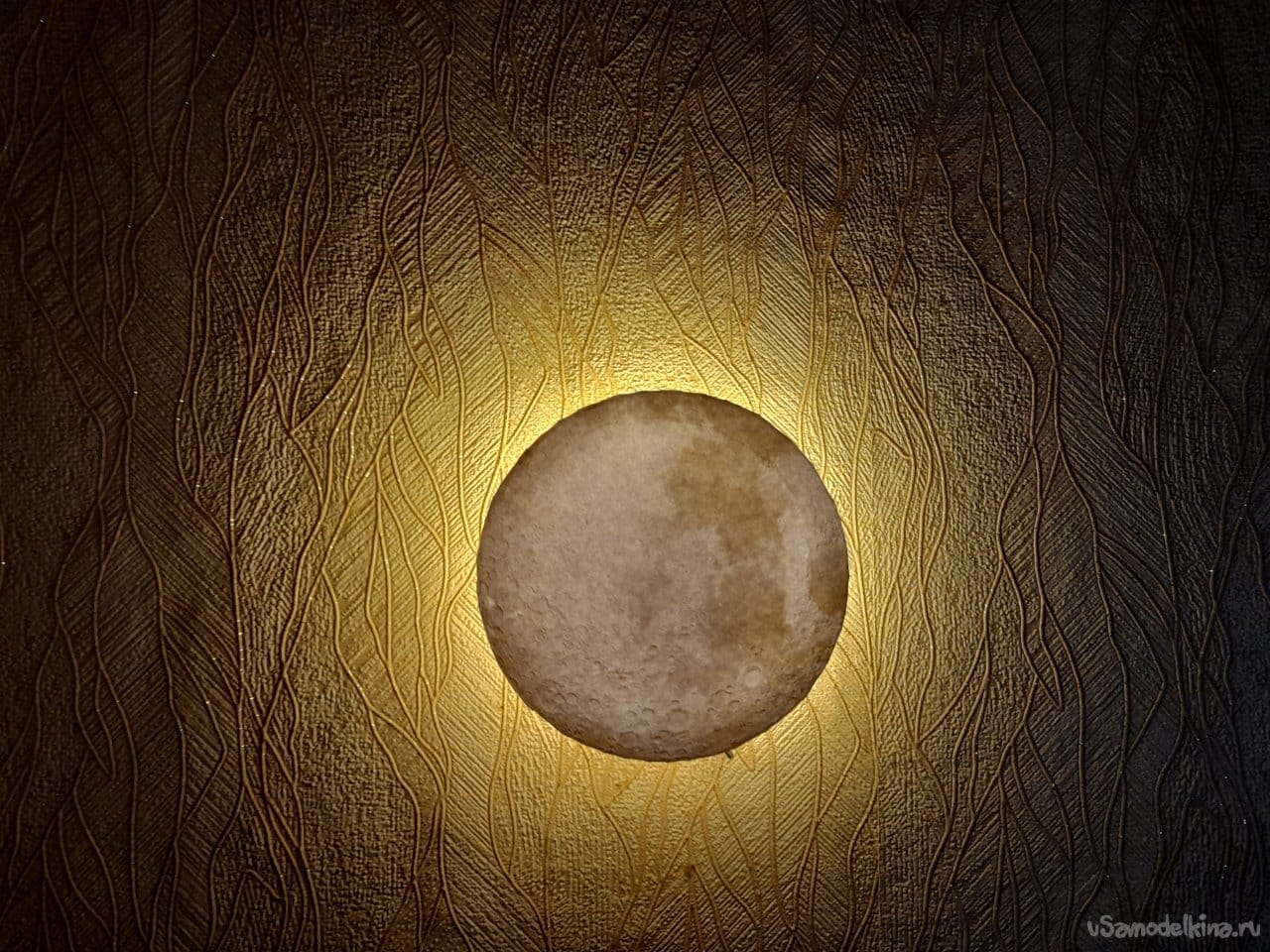 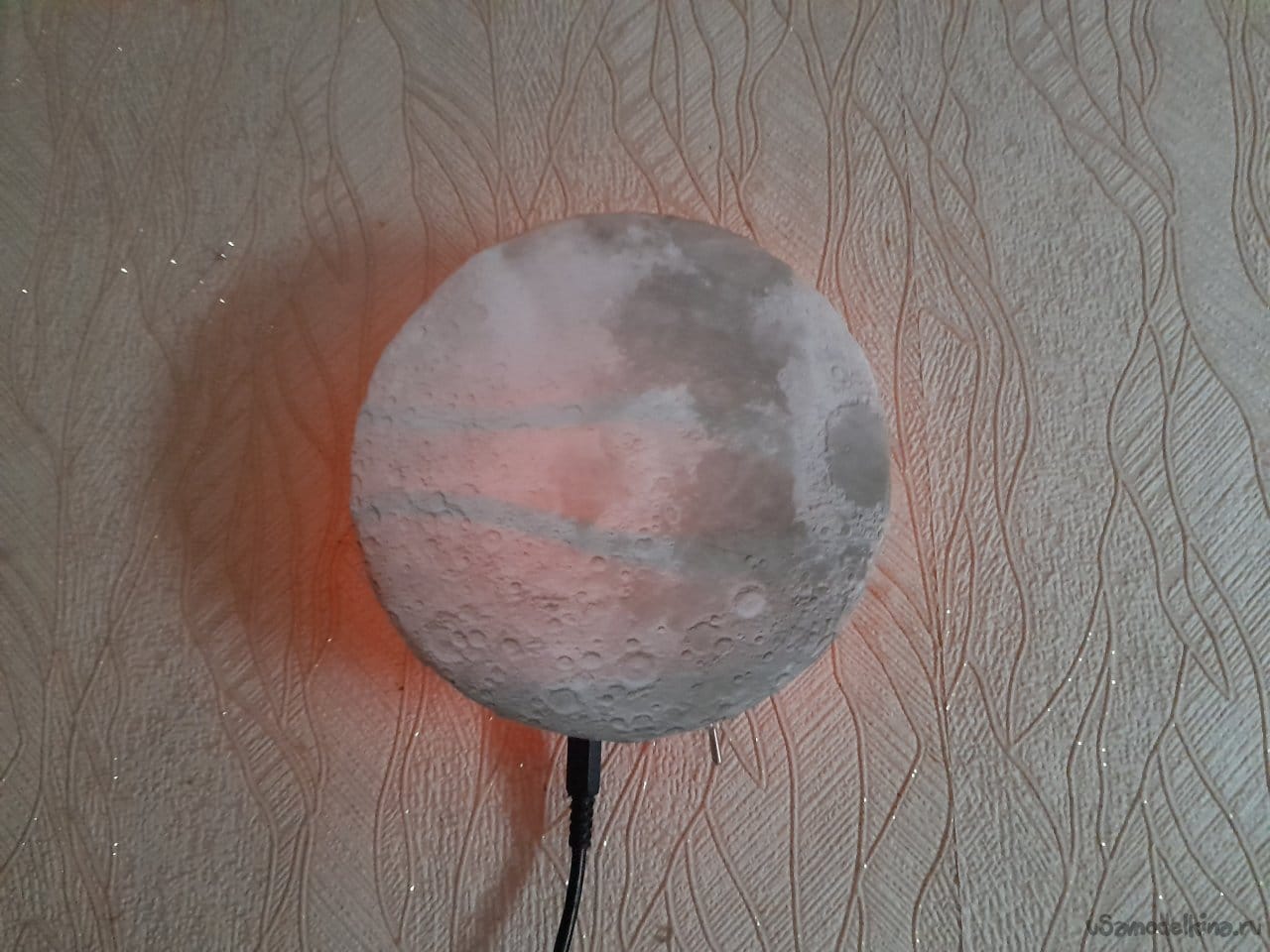 The charge is over 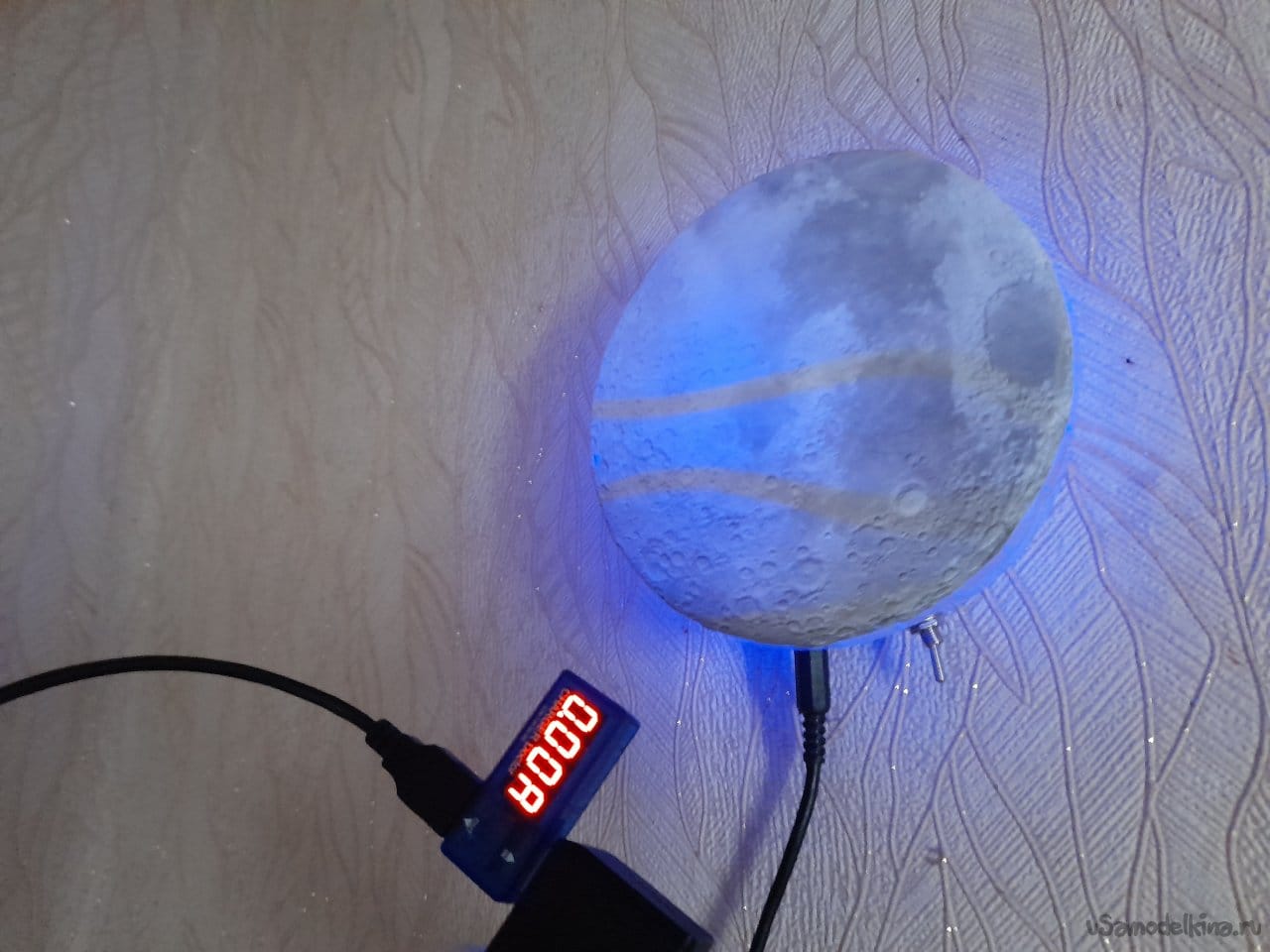 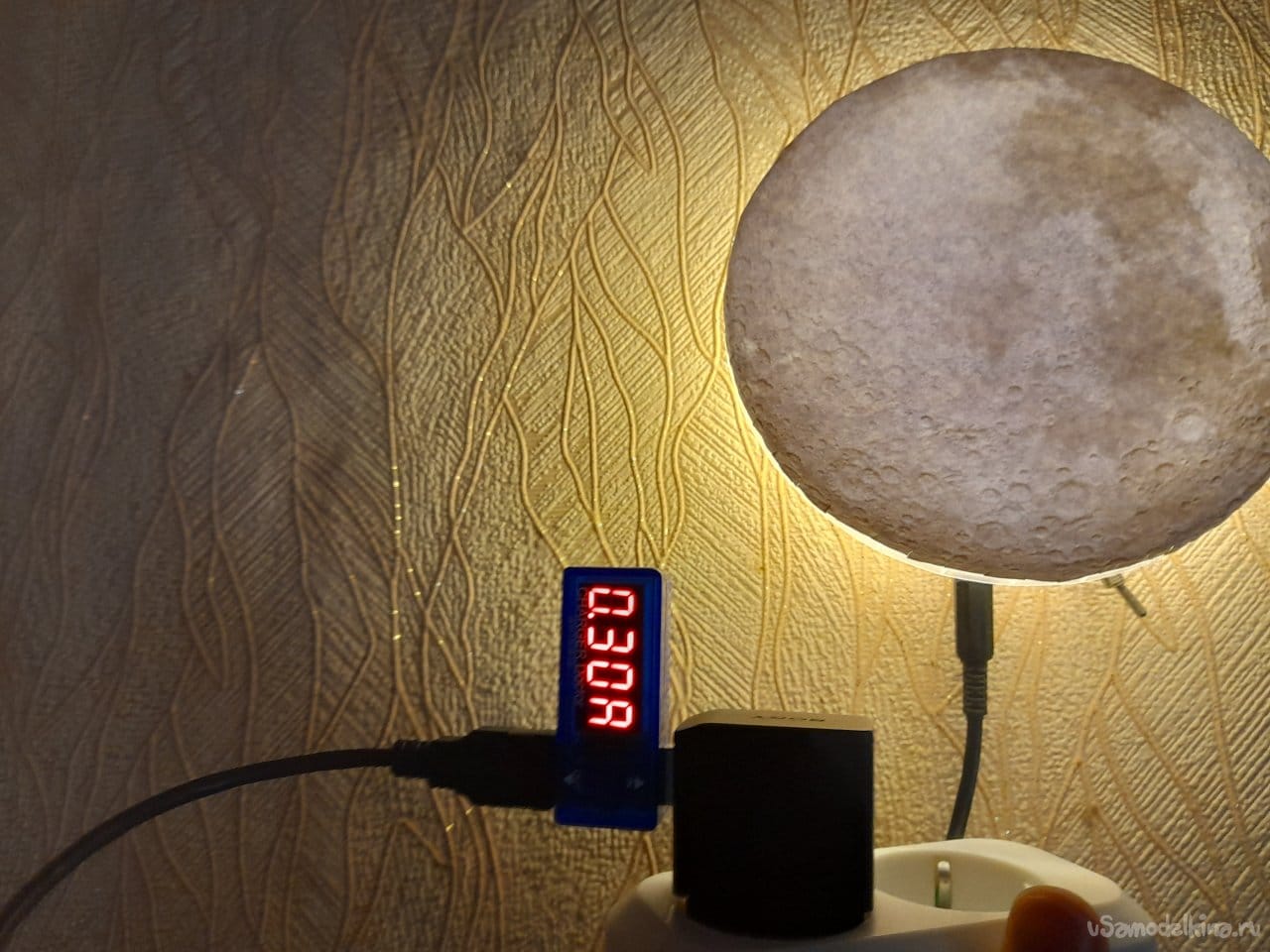 (Later I had to cut out the middle of the cover – the rim in the middle was visible). Also, it was possible to set a higher contrast in the printer settings and try printing on plain paper with a density of 80 g/m2. Once I made a backlight in an aquarium – on the LED strip, I replaced some of the white LEDs with ultraviolet LEDs of the same format. It looked beautiful in the aquarium. I tried such a tape in a lamp – it's not at all that, instead of ultraviolet, green would probably be more suitable. I don't have green 3528, and reworking the tape would take a lot of time, I would have to adjust the LEDs for current. Without all these problems, I made the lamp in a little over 1 hour, not counting the search, download and printout of the photo. Without a battery and accompanying kit, such a homemade product can be dazzled in 20 minutes. It was necessary to look for a bank with a larger diameter, but there is definitely no such house, and I did not want to go shopping. How it happened – it happened, I will definitely not do the second option with all sorts of improvements, because the best is the enemy of the good, the main thing is that the night light fulfills its functions. And this lamp has much nicer and more comfortable lighting than its store-bought ancestor, most likely due to the fact that this lamp has transparent walls, and the purchased one had only a screen-moon and the light was cold white, and in the homemade one it was warmer.
Source:

Powerful load control with one button