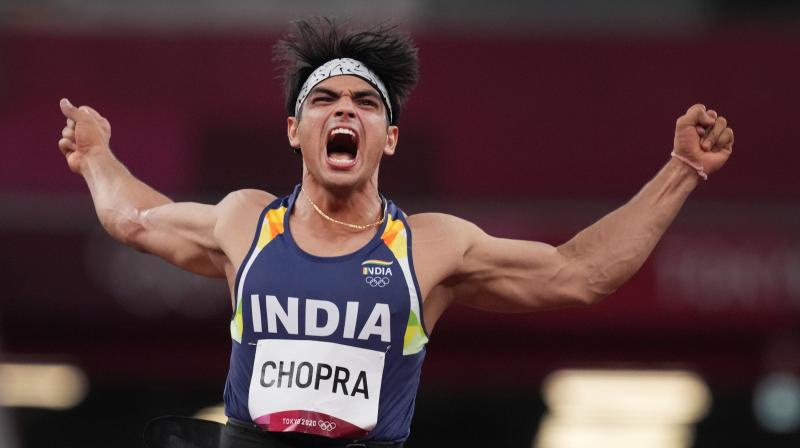 Tokyo: A history-scripting Olympic gold medal in his pocket, star javelin thrower Neeraj Chopra's next target is breaching the 90m mark soon in the coming events.

In fact, Chopra, who clinched the country's maiden athletics medal to become only the second Indian to win an individual gold in the Olympics, went for it while trying for the Games record (90.57m) on Saturday but could not accomplish it.

"Javelin throw is a very technical event and a lot depends on the day's form. Anything can happen. So, my next target is to breach the 90m (mark)," Chopra said after his historic feat.

"I was just focussing on Olympics this year. Now that I have won the gold, I will plan ahead for the upcoming competitions. After coming to India, I will again look for a foreign visa to take part in international events," he added.

After pulling out of the Gateshead Diamond League on July 13, Chopra had said that he could participate in the remaining legs of the elite one-day meeting series after the Olympics.

The Lausanne (August 26) and Paris (August 28) legs as well as the Zurich finals (September 9) will have men's javelin events.

The 23-year-old son of a farmer from Khandra village near Panipat in Haryana produced a second-round throw of 87.58m in the finals to end India's 100-year wait for a track and field medal in the Olympics.

The Olympics is the grandest stage for any athlete and can be intimidating but not for Chopra, who said he did not take any pressure and was going about his job just like he does at any other international event.

"There was no pressure and I was taking it (Olympics) just like any other event. It was like I have played against these athletes before and there's no reason to worry. I was able to focus on my performance. That has helped me win gold.

"Yes, I did think about India not winning a medal in athletics but once I get hold of my javelin, all these things do not come to my mind."

He was short on preparations in the run-up to the Olympics with just three international events under his belt, and only one of them featured a top class field.

But he said he was happy to have got the chance to compete.

"The most important thing was I got international competitions before Olympics. I was desperate for that. I requested Target Olympics Podium Scheme (TOPS), Sports Authority of India (SAI) and Athletis Federation of India (AFI) to arrange some. They arranged, and because of that, I am here now.

"For all the facilities I have got, I want to thank SAI, AFI and TOPS."

Asked how he was able to come up with big throws in his first two attempts, he said, "If the first throw goes well, then it releases the pressure. That happened. The second throw was also very good.

"I knew at the point of release both will go far. That must have put pressure on the other athletes."

Talking about his friend and medal favourite Johannes Vetter of Germany, who was eliminated after the first three throws, Chopra said, "He was struggling, I don't know whether it was because of pressure or was it due to playing in too many events. He was not in his form."

The 28-year-old Vetter had come into the Olympics as the top contender for gold, having thrown 90m plus on seven occasions between April and June, but he was shockingly eliminated, placed ninth after the first three throws with a best effort of 82.52m.

Chopra, who clapped for Vetter when he was throwing, felt for the German former world champion. They are friends off the field, having spent time together during a few top international competitions.

"I was feeling a little bad that he could not qualify in the final eight. He is such a good javelin thrower. However, I just focused on my performance."

Chopra refused to be drawn into Vetter's pre-Olympics comments to PTI that it would be tough for the Indian to beat him in the Games.

"I knew that (Vetter's comments). At the Olympics, records do not matter much. Nobody knows how the day will go. I did not respond as I respect him a lot. He is a good friend."

After his exit, the German, who had won gold and a bronze in 2017 and 2019 World Championships respectively, had said that he was happy to see Chopra winning the gold.

"He (Neeraj) is a really talented guy, always really friendly. I am happy for him," said Vetter, who has a personal best of 97.76m and has thrown the javelin past 90m mark on seven occasions between April and June.

Vetter and Chopra had travelled together for three hours from Helsinki when both competed in the Kuortane Games in Finland in June. Vetter had won the event while Chopra had finished third.

The duo had discussed their game and life beyond it.

In 2018, Vetter had predicted that Chopra would be one of the stars in the world arena and will throw 90m plus in near future.

Chopra also did not forget to mention the contribution of his childhood mentor Jaiveer Choudhary from a place near his native village in Haryana. Jaiveer had initiated him into javelin at Shivaji Stadium in Panipat.

"I started with Jaiveer. He supported me a lot when I knew nothing about javelin. He is coaching in the national camp now. He is very dedicated. Training with Jaiveer helped me improve my basics.

"In athletics, you develop slowly. Javelin is a very technical sport. I rectified my faults over time. Then I trained under foreign coaches who further rectified my errors. My coaches have helped me a lot. All that support has brought me here."