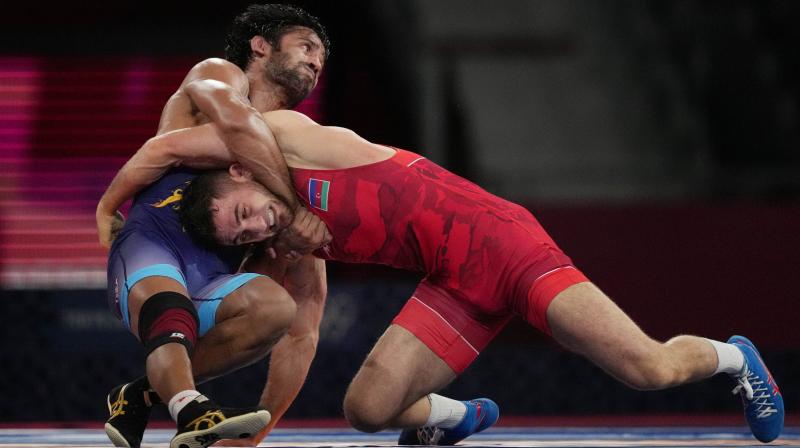 Chandigarh: Haryana Chief Minister Manohar Lal Khattar met the family of wrestler Ravi Dahiya, who won silver medal at the ongoing Tokyo Olympics, while Home Minister Anil Vij went to Olympic gold medallist Neeraj Chopra's home in Panipat to congratulate his parents. Dahiya's family and representatives of Nahri village in Sonipat expressed gratitude to Khattar for boosting the morale of sportspersons and creating a harmonious environment for them to grow and perform at the international platform, according to an official statement here on Sunday.

The chief minister, while congratulating the parents of the wrestler at his native Nahri village, also resolved several issues of the area on the spot, it said.

Among the family members present along with other representatives were Ravi Dahiya's father Rakesh and uncle Mukesh Dahiya, members of the Nahri Gram Panchayat and former sarpanch of the village.

At star javelin thrower Chopra's home on Sunday, Vij congratulated the family, saying he has made the country proud.

After honouring Chopra's parents with a turban and a shawl, Vij bowed down and touched their feet.

"I have come to touch the feet of the parents of the son-of-the-soil who has brought laurels to the entire nation," he told reporters later.

Vij said, "The country used to wait from one Olympics to the other in the hope of winning a gold in athletics. That wait is over now and Neeraj has fulfilled that dream. His performance will encourage more sportspersons to achieve heights of glory."

Replying to a question, he said if Chopra wants to set up an academy to train youngsters, the government will consider.

Chopra's father Satish said that the Olympic champion will be arriving in India on Monday evening.

He said once he is back in the country will the family know on which day he will reach his hometown.

Meanwhile, during Khattar's visit to Dahiya's home, village representatives presented a demand letter to the chief minister in which grievances of the people of the area were listed.

Khattar immediately took up the grievances and asked the officers concerned to resolve them on priority basis. Among the key issues, which the representatives shared with the chief minister, was the problem of water drainage in the area. Taking up the matter, Khattar spoke to the deputy commissioner, Sonipat and asked him to resolve the matter immediately. He also accepted the demand to open a model school in the area and directed the officers concerned to resolve other issues of the area on priority basis.