Hello, homemade radio amateurs!
August has come, the days are getting shorter, the evenings are colder and longer – which means it's time to start collecting funny LED effects that will “warm” the atmosphere with their flickering in the evening twilight. LED effects presented in the form of circuits for assembly on the Internet are usually either complex and very large-scale, controlled by a microcontroller, or, conversely, too simple and primitive, built on several transistors. The latter include, for example, the well-known and, by the way, not outdated multivibrator. Microcontrollers and their programming are not available to everyone, so you often have to limit yourself to their absence. However, among the LED effects, there is an alternative presented in this article – an LED cube consisting of 27 LEDs and controlled by only two available microcircuits that do not require programming. Meanwhile, in terms of effectiveness, such a cube is practically not inferior to microcontroller systems. Its diagram is presented below. 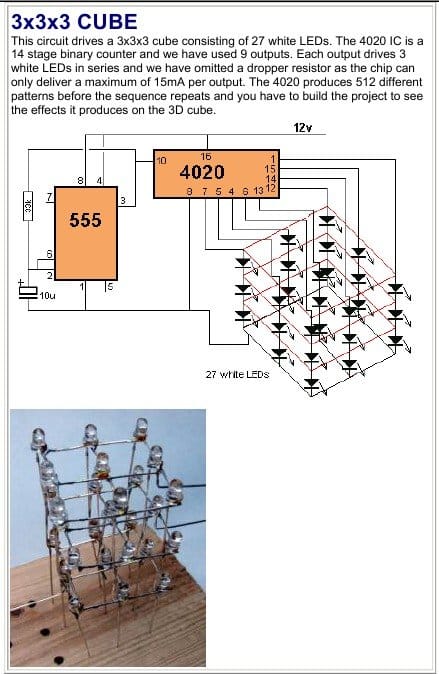 The point is that 27 LEDs make up a cube with edges 3 by 3 LEDs. When the circuit is turned on, they begin to wink in an intricate way, creating a kind of 3D effect. These winks are formed by only two microcircuits.
The first of them – the very popular NE555 timer (domestic analogue of KR1006VI1), is a square-wave generator. It is sold in any store of radio components and costs a couple of tens of rubles, the type of microcircuit is presented below. It is produced in the DIP8 package, it also exists in the SMD package, but in this case the use of SMD is not justified. 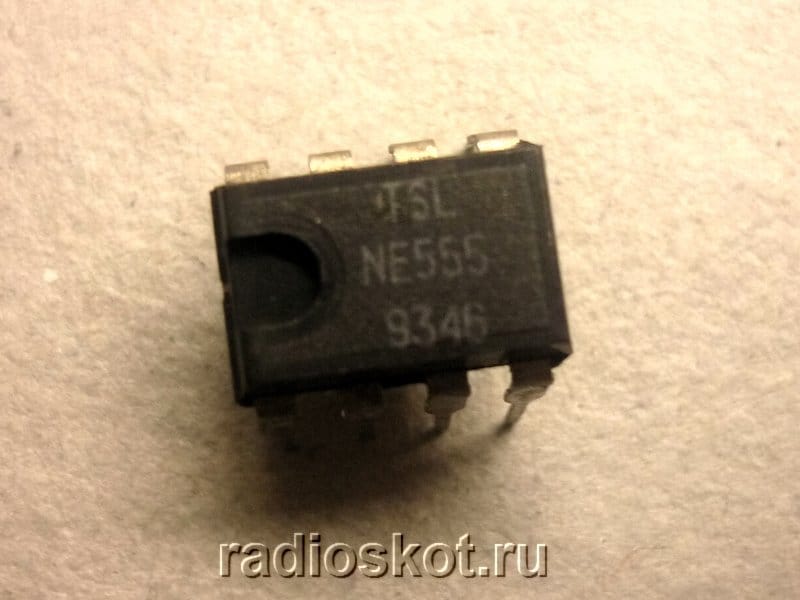 The second microcircuit is a 14-bit counter-divider K561IE16, its full counterparts CD4020, MC14020 can also be used in the circuit. The microcircuit has an input to which rectangular pulses are supplied from the NE555 timer, as well as several outputs, on which voltage alternately appears in time with the pulses arriving at the input. The LEDs of the cube themselves are connected to the outputs of the microcircuit, which will light up in certain sequences. View of the microcircuit below. 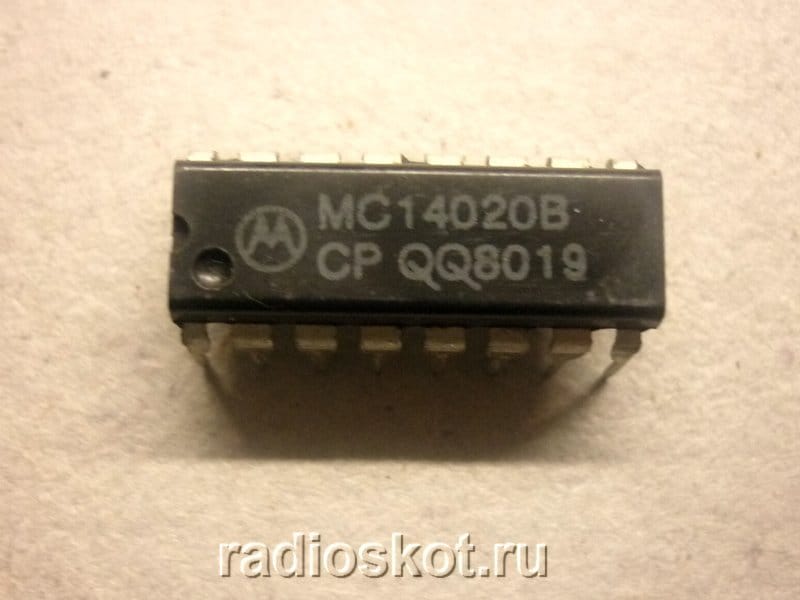 27 LEDs of any color, 33 kΩ resistor and 10 μF electrolytic capacitor. For convenience, a latching button is put into the power circuit, which will turn the cube on and off. 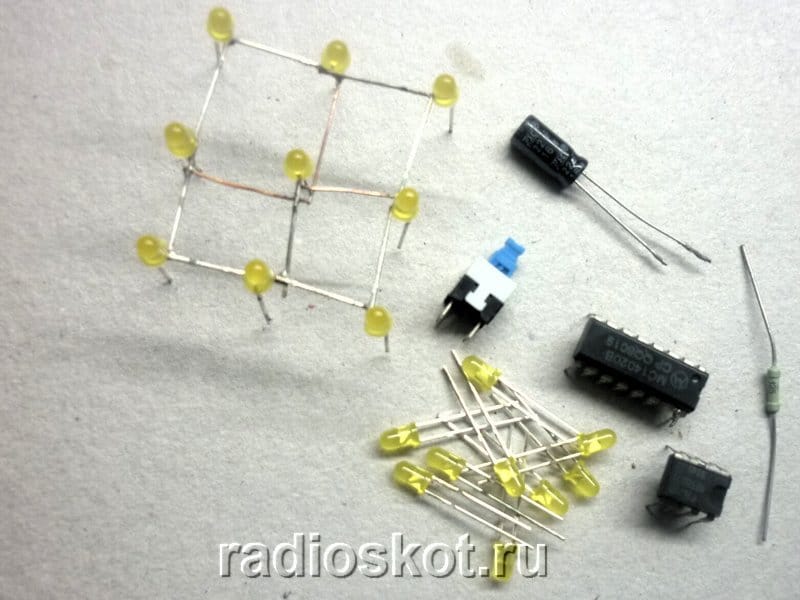 The main difficulty in assembling the structure is not even soldering the circuit itself, but assembling a cube from LEDs. It will consist of 3 floors, each floor will have 9 LEDs. First, separate floors are soldered together, and then they are combined. The LEDs will hold due to their own terminals, with which they are soldered to each other. For the central LEDs, separate jumpers should be made from pieces of copper wire. When soldering a cube, it is important to observe the polarity of each of the 27 LEDs indicated in the diagram, if you mix up the polarity of at least one, the cube will glow incorrectly. If new LEDs are used, it is quite easy to determine their polarity – the short lead will always be the cathode, and the long lead will always be the anode. Below are photos of the process of making a cube. The smoother it will be to assemble it, the neater and more pleasant the whole structure as a whole will look.
To mount the electronic circuit, a printed circuit board should be made, on which the cube itself will also be installed. The author uses a marker to draw tracks on the PCB – in the future, the board will be immersed in an etching solution, while all the copper around the tracks will dissolve. It remains to erase the marker itself from the board and drill holes in the right places for the outputs of the parts. When drawing the board, do not forget about the place for the cube. Therefore, it should be made first of all, and only then, when its final dimensions are known, draw contact pads on the board for its installation. Below are photos of the board manufacturing process. 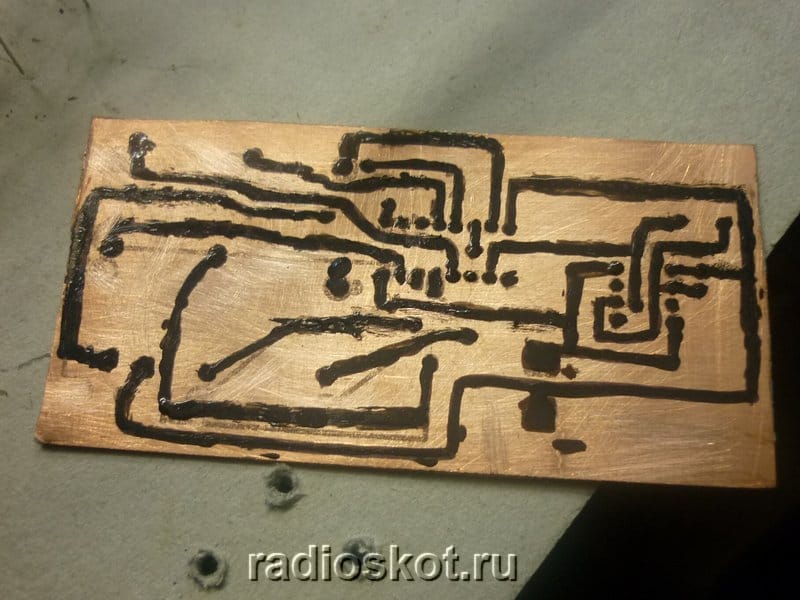 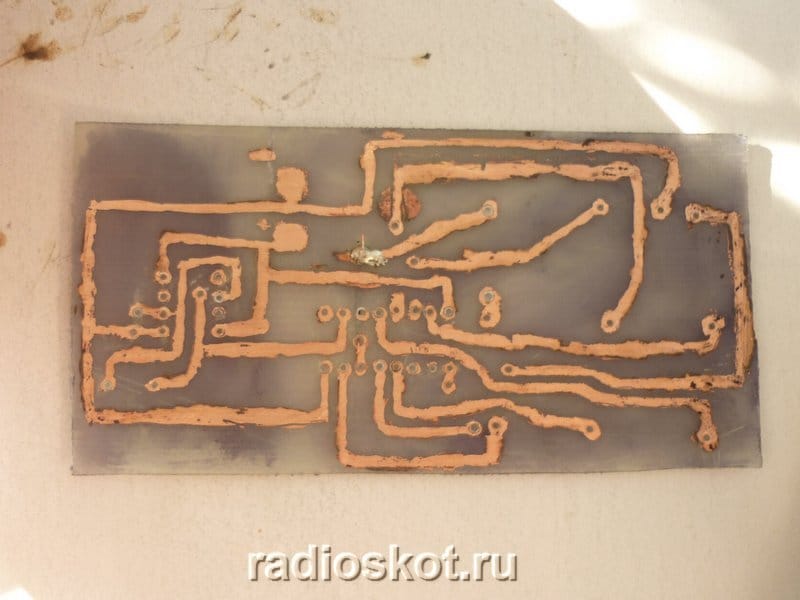 The microcircuits must not be soldered directly to the board – you can use the sockets that are soldered onto the board, and the microcircuit is already placed on top of them. This method will avoid the need to unsolder the microcircuit if it suddenly burns out due to polarity reversal or exceeding the supply voltage. The cube is soldered to the board last – after the microcircuits and jumpers. Also, the board should provide contacts for connecting the power wires. The supply voltage of the circuit is 9V – this is the optimal value, since at 12V it may turn out to be too much for a counter microcircuit. The consumed current depends, first of all, on the LEDs, and is 40-80 mA. Krona is suitable as a test power source, but after a couple of hours of cube operation it will sit down. 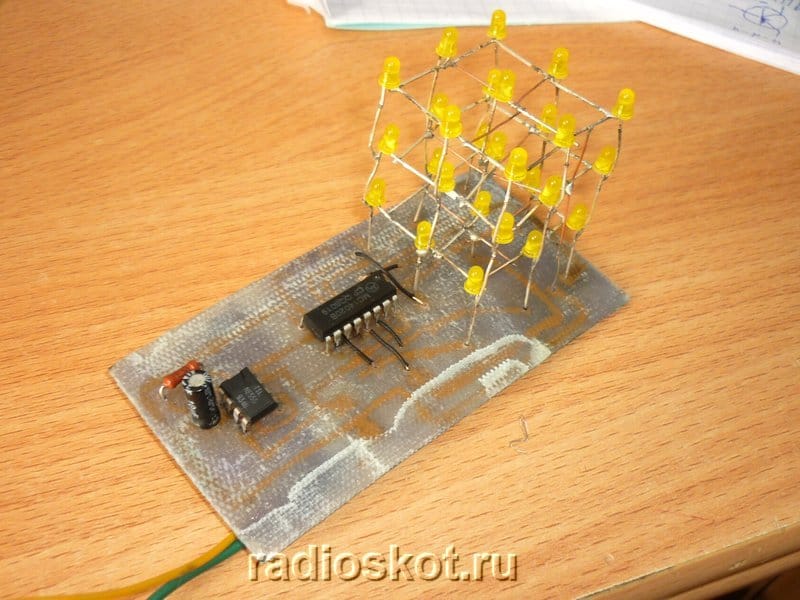 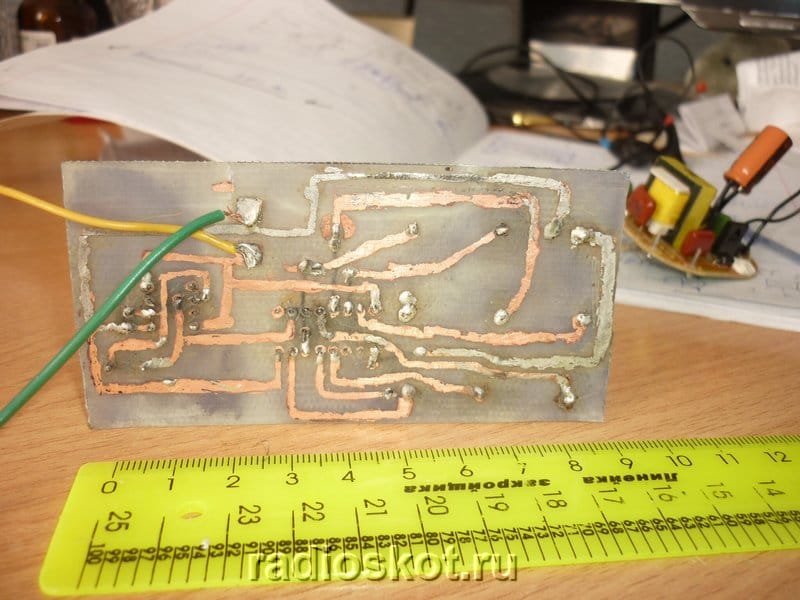 Thus, we have a simple” weekend construction “, which can be assembled simply for the sake of interest and training in soldering skills. The advantage of the circuit is that there is no need for any configuration and programming of microcontrollers. Happy assembly!

How to undo a plastic tie (cable tie) without cutting it