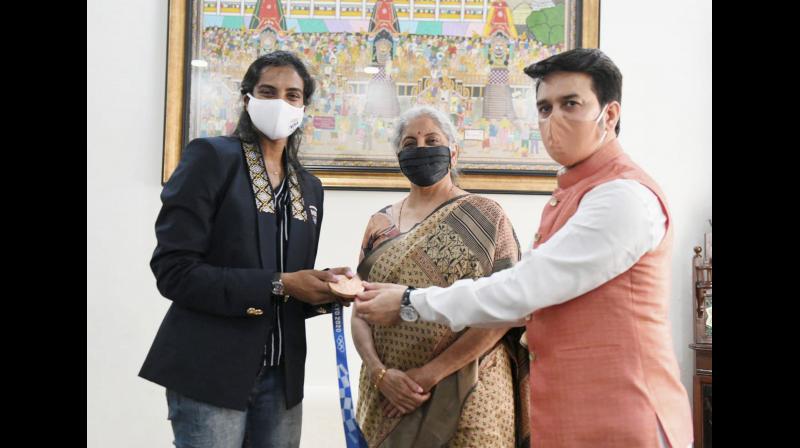 New Delhi: Sports Minister Anurag Thakur on Tuesday hailed P V Sindhu as a sporting icon and one of the “greatest Olympians” the country has ever produced after she returned to the country to a warm reception following her bronze-medal winning feat at the Tokyo Games.

Sindhu on Sunday became the second Indian and first woman from the country to bag two Olympic medals after winning the bronze in Tokyo, five years after securing a silver at Rio Games.

The 26-year-old from Hyderabad was accorded a warm welcome when she returned to the country on Tuesday.

“PV Sindhu is amongst India's greatest Olympians. She is India's icon, inspiration and has caught the imagination of every Indian who dreams of playing for the country,” Thakur said after felicitating Sindhu and her Korean coach Park Tae-Sang here.

“Her incredible achievement – that of winning two Olympic medals in two consecutive Olympic Games will inspire a generation of budding athletes. Her success shows how the Target Olympic Podium scheme of the government has nurtured our Olympic hopefuls towards a podium finish.”

Sindhu, the reigning world champion, had defeated China's He Bing Jiao in the bronze play-off.

“I would like to thank each one of my fans because of the support and though we played without fans in the stadium, but I am sure billions have supported me from India and this success is the result of their wishes,” Sindhu said.

“I would like to thank my parents for their constant support and scarifies and my coach for working with me and making this dream come true.”

Earlier, Sindhu was received at the Indira Gandhi International airport by Badminton Association of India (BAI) general secretary Ajay Singhania, who also felicitated her and coach Park at the airport.

Sindhu is the second Indian athlete to return home with a medal from Tokyo after weightlifter Mirabai Chanu, who won the 49kg class silver on July 24.

Boxer Lovlina Borgohain, who is assured of a 69kg medal, will compete in the semifinal against Busenaz Surmeneli (Turkey) on Wednesday.

IOC gives itself more power to remove sports from Olympics

Rafael Nadal pulls out of second event in 24 hours