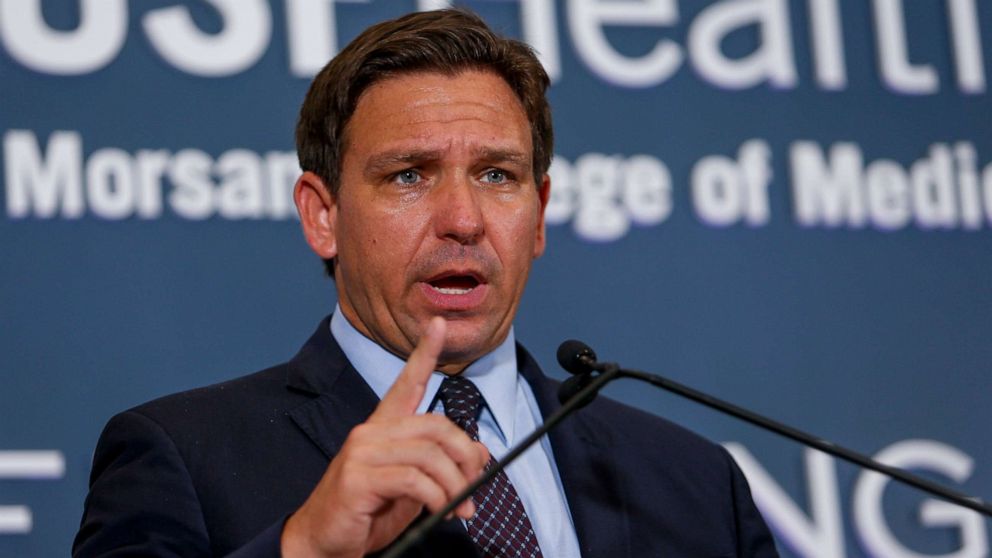 This summer has seen pro-Trump Republican governors threaten local officials and private entities in a debate over masks and mandates that remains sadly relevant.

Florida Gov. Ron DeSantis and Texas Gov. Greg Abbott are now both warring with officials in their own states about whether school districts should be able to require mask-wearing, amid case spikes in their states and concern about COVID’s spread among unvaccinated children.

At least two school districts in Florida are keeping mask mandates in place and not allowing parents to opt out. That sets up a showdown with DeSantis, who has threatened districts with possible cuts in state funding.

Meanwhile, Dallas’ school district is sticking with its mask requirement and officials in Houston and Austin are debating doing the same. Abbott signed an executive order banning mask mandates that he now hopes to codify into law during the Texas legislature’s current special session.

It’s striking how differently Republican governors — including others with national ambitions — are handling the issue of mask requirements. South Dakota Gov. Kristi Noem announced that she is leaving decisions to local officials; Arkansas Gov. Asa Hutchinson last week tried and failed to reverse a ban on mask mandates he had previously supported, in what he now calls an “error.”

What all of those Republicans agree on is the broad concept that federal leaders should not tell state officials what they should be doing, notwithstanding Trump’s onetime assertion of “total” authority over the nation’s COVID response.

But as they position themselves for reelection runs and possibly more, DeSantis and Abbott are asserting authority to overrule local school officials — even as the threats posed by the virus surge again inside their states.

The strongest warning to date from a United Nations climate panel about the worsening impacts of climate change due to human influence, is coinciding with criticism from some leading progressives over bipartisan infrastructure bill negotiations.

As reported by ABC News’ Stephanie Ebbs, the report will set the stage for global negotiations later this year on how to more drastically reduce greenhouse gas emissions to limit the impact of warming temperatures as much as possible.

In the meantime, the report is adding fuel to concerns aired by some leading progressives about a lack of climate action included in the bipartisan infrastructure deal that’s being ironed out in the Senate. Rep. Alexandria Ocasio-Cortez is among the most vocal critics of the bill, having previously issued a veiled threat suggesting that progressives could sink the plan in the House over those policy concerns.

“This dire warning from the world’s scientists comes as the Senate is preparing to vote on an infrastructure bill that utterly fails to meet the scale of the climate crisis. Reconciliation is now our country’s best chance to help stop the worst effects of climate change,” Ocasio-Cortez said in a tweet Monday following the release of the IPCC’s findings.

Democrats have a thin majority to work with in the House to pass the legislation, and it remains to be seen whether this latest push for action from climate experts contributes to progressives mobilizing to derail it from passing.

The campaign for Virginia gubernatorial nominee Terry McAuliffe became one of the latest employers to say the “unvaccinated need not apply.”

“In the interest of public health and the safety and wellbeing of our team, Terry for Virginia has made the decision to require full vaccination against COVID-19 as a condition of employment with the campaign,” Chris Bolling, McAuliffe’s campaign manager, announced Monday.

McAuliffe’s campaign did not respond to questions from ABC News about when this policy takes effect, as it takes time to become “fully vaccinated,” but the move follows prominent elected Democrats instituting vaccine requirements for state or federal workforces.

The campaign for Republican nominee Glenn Youngkin is taking a different approach.

“If Terry McAuliffe gets the chance, he will shut down our economy, close small businesses, and deny Virginians the right to make their own health care decisions. As Glenn has said, he made the choice to get vaccinated himself and he encourages people to get the vaccine, but it should be left to the individual to make the decision,” a campaign spokesperson said.

This is in line with the GOP’s and his past comments. Months before New York’s mayor announced individuals would soon need to show proof of vaccination to do pre-pandemic indoor activities, Youngkin was already blasting the concept.

“This idea of requiring people to show a ‘vaccine passport’ to participate in everyday life is wrong. The vaccines should be available to all Virginians, but to mandate it is a step too far,” he tweeted in March, pledging to bar that if he’s elected governor.

ABC News’ “Start Here” Podcast. Tuesday morning’s episode features ABC News’ Trish Turner, who brings us up to speed on the state of the bipartisan infrastructure bill in Congress. Dr. Paul Offit, director of the Vaccine Education Center at Children’s Hospital Philadelphia, explains what the FDA will be looking at when considering full approval of the Pfizer vaccine. And ABC News’ Ines De La Cuetara joins us from Greece, where hundreds of wildfires are prompting evacuations. http://apple.co/2HPocUL

FiveThirtyEight’s Politics Podcast. In his first six months in office, President Joe Biden had the most stable presidential approval rating in history. His approval rating is still incredibly steady, but in recent weeks it has begun to decline. In this installment of the FiveThirtyEight Politics podcast, the crew discusses why Biden’s approval rating is falling and how much Democrats should worry. They also check in on the results from the two recent primary elections in Ohio. Lastly, they announce the launch of FiveThirtyEight’s Redistricting Tracker and talk about the most important factors going into the congressional redistricting process. https://53eig.ht/3jBDPPD

Fresh from 2020 election, big donors are already jumping back in to support pro-Trump and pro-Biden PACs