installs “smart home” systems in his apartments, providing for the automation of everything and everyone. However, automation elements may not be so large-scale, but more concise and simple, for example, a delayed circuit breaker, which you can assemble with your own hands from improvised radio elements.
The principle of operation of the switch will be as follows – there is a conventional button without latching, for example, like a doorbell. When it is briefly pressed, any load is turned on, for example, lighting, and it works for a certain time, from several seconds to minutes, after which it turns off itself until the next press of the button. The beauty of this system is that literally a meager amount of radioelements is required to assemble it. The diagram is presented below. 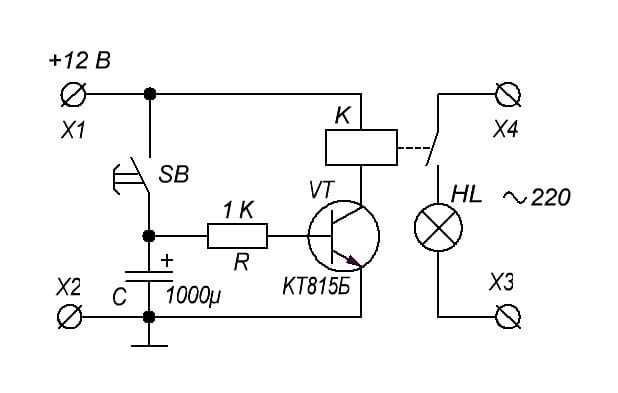 The circuit uses one transistor – almost any NPN structure with a collector current of at least 500 mA is suitable, it is advisable to choose those with a gain of 200 or more, usually this is indicated by the index at the end of the transistor designation. You will also need a 500 Ohm resistor – 5 kOhm, and an electrolytic capacitor with a capacity of about 1000 μF. The capacitance of the capacitor will determine the time that the switch will remain on after pressing the button, the larger the capacitance, the longer the time will be. The circuit works as follows: When the button is closed (SB on the circuit), the capacitor is almost instantly charged to the supply voltage of the circuit, respectively, the voltage across the capacitor becomes equal to it. After releasing the button, the charge accumulated in the capacitor through the current-limiting resistor enters the base of the transistor, from which it opens. The opened transistor energizes the relay coil, shown in the diagram as “K”, and the relay, in turn, already includes some kind of load, be it a light bulb or something else.
The supply voltage of the circuit can be 5 – 12V, it will depend on which relay is used – if the relay winding is 5V, then it is 5V that should be supplied to the circuit. This voltage is very convenient because it can be obtained from any telephone charging with a USB output. A large power supply is not required, 100-200 mA is sufficient. 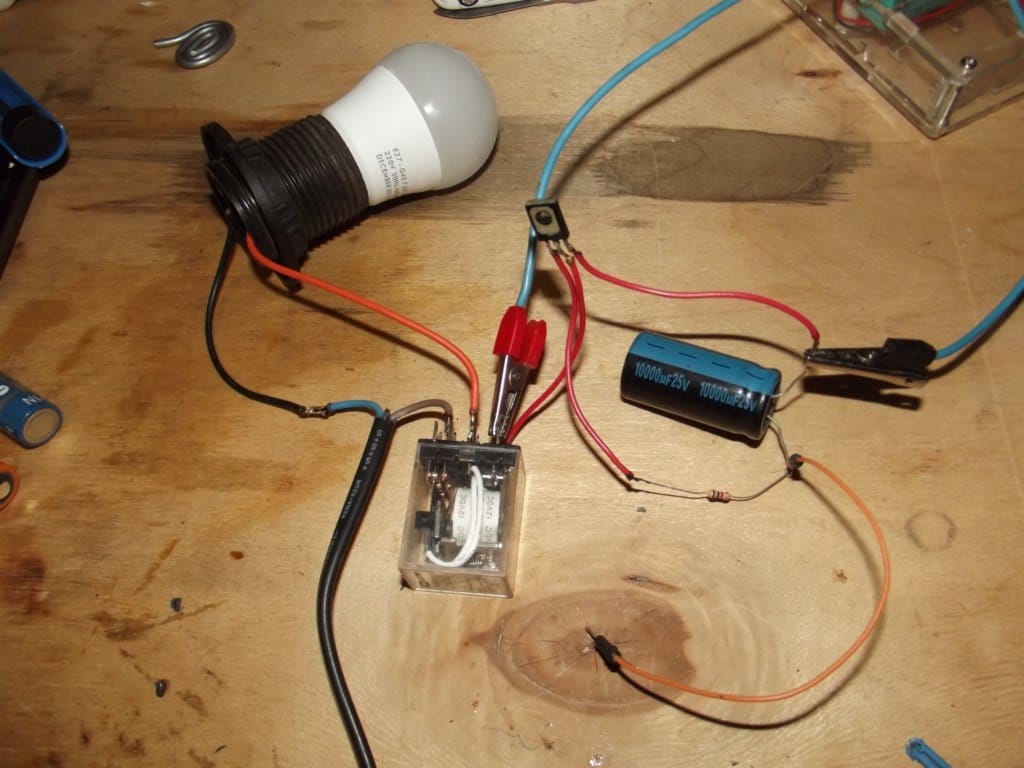 You can mount the entire circuit by surface mounting, as shown in yours, and put it, for example, in a junction box. If a long operating time of the load is required after pressing, then the field-effect transistor should be installed – for example, IRF630, IRF740 and the like. In this case, the operating time can be tens of minutes, however, the supply voltage of the circuit must be at least 12V, otherwise the field-effect transistor simply will not open completely. Also in this case, parallel to the capacitor, it is desirable to put a resistor of 5 – 10 MΩ.
The button can be used literally any without fixing – for example, from the same doorbell, as shown below.
The scope of the scheme is limited only by imagination. One interesting application is to connect a fan to purge the toilet. When leaving the toilet, press a button, and the fan will ventilate a small room for a given 1-2 minutes of operation, removing the smell, and turn itself off. Happy build!
Source:

“Superheater” for a soldering iron

Casting of aluminum parts based on 3D printed models

How to undo a plastic tie (cable tie) without cutting it