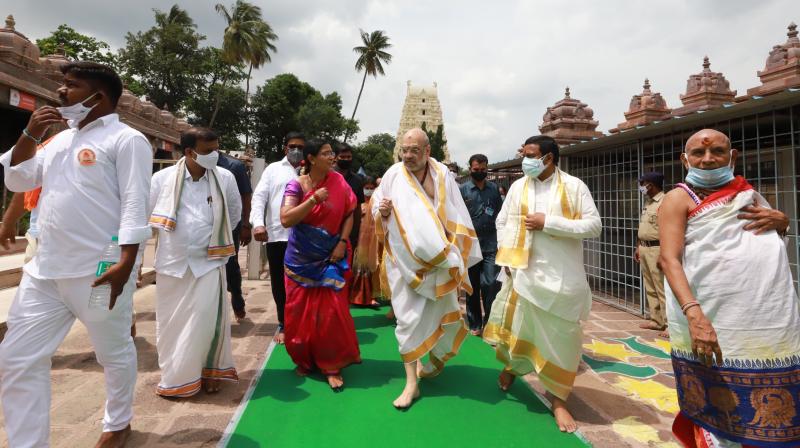 The Shah couple arrived by a special helicopter from Hyderabad, landed near Sunnipenta and drove by car to the abode of Lord Mallikarjuna Swamy atop Srigiri hills.

The Union home minister appeared relaxed and was at ease during his visit to the temple town. He held chats with the temple authorities and said this was his first visit to Srisailam.

“I have been getting attracted to Srisailam for quite some time and now got the opportunity to come and take Lord Shiva's blessings," Shah told them.

The couple was alone when they offered Abhisekham and Kumkumarchana at Mallikarjuna Swamy temple. The two were given Sparsha Darshan at the sanctum sanctorum.

Later they went to the adjoining temple of Goddess Brhamaramba and offered Kumkuma Archana there. The couple was given a souvenir, shesa vastrams and prasadams befitting the temple traditions.

During the time Shah spent in the temple complex, he reminisced the Somnath temple and savoured the grandeur of the Srisailam temple. Underlining the importance to protect and develop temples of national importance, Shah told the temple authorities that special funds would be provided for this purpose by the central government.

The home minister planted Arjuna saplings in the southern Mada Veedhi. He had a glimpse of the copper plates that had been unearthed recently at Srisailam during the renovation of the Ghanta Matham. After completing temple pujas, the Shah couple left for the Chatrapathi Shivaji Maharaja Spurthi Kendra and spent some time there.

The Shah visit came soon after the Lok Sabha was adjourned sine die a day ago. State BJP leaders were not present during his visit but Kurnool district leaders and former ministers Adinarayana Reddy and Ravela Kishore were seen around the HM.

Shah spoke to Kurnool party leaders and told them, "We shall one day gain power in AP too if you work well.” BJP district president Hareesh said Shah asked the district party leaders to work closely with booth-level leaders and ensure that BJP’s message reached every nook and corner.

The case against anti-vaxxer coddling

India, China pull back from Gogra