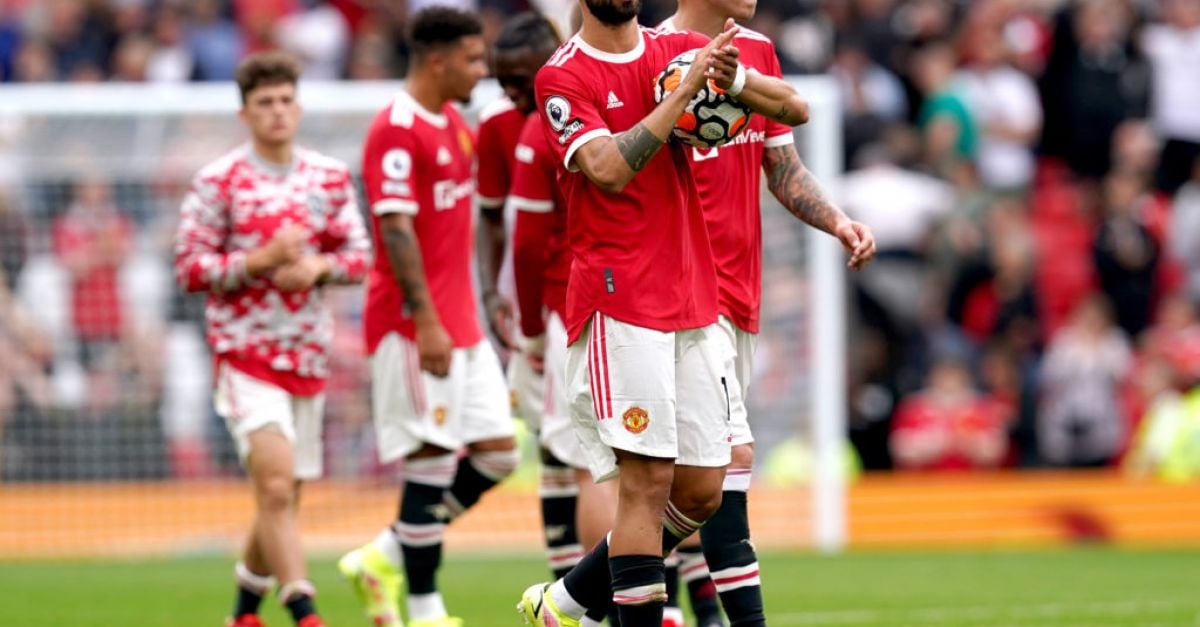 The atmosphere was crackling as the ground welcomed a sell-out crowd for Saturday’s Premier League clash and the din increased several notches when their new signing was introduced before kick-off.

The Portuguese put Ole Gunnar Solskjaer’s men ahead at the break, only for Luke Ayling’s stunner to level things for Marcelo Bielsa’s men early in the second half.

Greenwood scored smartly from an exquisite Pogba pass, before a hopeful Fernandes effort was adjudged to have crossed the line and he then completed his hat-trick with an unerring finish.

Fred added a fifth as Pogba provided his fourth assist of an afternoon when Solskjaer’s name echoed around a buzzing Old Trafford.

The result continued Leeds’ long wait for a league win at Old Trafford, where the hosts translated the intense atmosphere onto the pitch.

Greenwood looked lively from the outset and followed a 25-yard effort with a more fortunate attempt on goal as Pascal Struijk’s clearance hit him and threatened to loop over Illan Meslier.

The 19-year-old was involved again as the hosts had their best chance of the first half, with Pogba following a superb stepover when up against Leeds’ goalkeeper by directing narrowly wide.

That appeared to jolt the visitors, roared on by 3,000 travelling fans, into life, with David De Gea producing an important save to deny Mateusz Klich before Rodrigo powered a header wide from a fine free-kick.

But Man United would break the deadlock on the half-hour mark as Pogba expertly clipped a first-time ball through to Fernandes, who took a touch and squeezed past Meslier.

Luke Shaw struck just wide of the near post and Daniel James went close before the first half came to a close.

Bielsa turned to debutant Junior Firpo at the break and Leeds made a superb start to the second half.

The hosts were caught napping from a throw-in and right-back Ayling capitalised in style, taking aim from 25 yards to thump expertly into the top left-hand corner.

But Man United regularly showed their mental toughness last season and hit back with two goals in quick succession.

First Pogba put Greenwood behind the Leeds backline with an outstanding pass and the teenager hit a low strike off the far post in the 52nd minute.

Solskjaer’s side had the bit between their teeth and pulled further ahead in the 53rd minute as goal-line technology ruled Fernandes hopeful strike had crossed the line before Ayling could clear.

Things swiftly went awry for Leeds, who were picking the ball out of the back of their net again in the 60th minute.

Victor Lindelof sent a fine, direct ball from the back and Fernandes watched it over his shoulder before expertly rifling it beyond Meslier in front of the Stretford End.

A video assistant referee check for offside was cleared and punch drunk Leeds struggled to regain their composure, with fans turning their anger on substitute Jadon Sancho as they chanted ‘you let your country down’.

They were soon silenced by unlikely goalscorer Fred, who turned home a Pogba cross to apply salt to the wounds in the 68th minute.

The majority of 72,732 in attendance were in dreamland and would welcome Sancho for his debut as the match wound down.

Greenwood went close to making it six before Raphinha drilled wide on an afternoon to forget for the visitors as Man United ran amok at Old Trafford.

It has become okay to talk about depression, it’s positive: Anderson