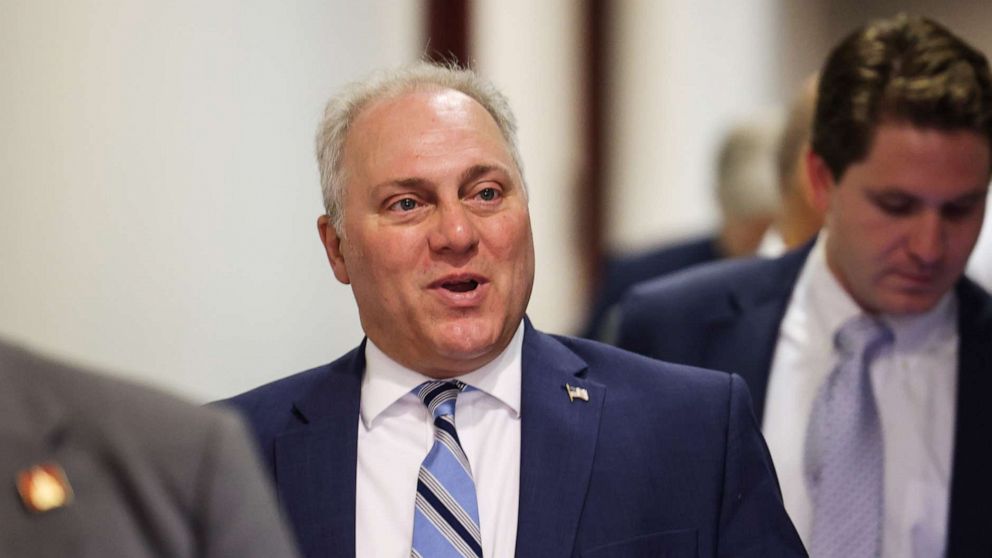 With his home state of Louisiana setting new records for COVID-19 cases and hospitalizations, Rep. Steve Scalise, R-La., on Tuesday encouraged residents to get vaccinated, touting the safety and efficacy of the vaccines and urging people to talk to their doctors about any concerns.

“Instead of trying to blame people, let’s encourage people to protect themselves,” Scalise, who received his second dose of the Pfizer vaccine Tuesday morning, told ABC News Correspondent Kyra Phillips on ABC News Live. “In terms of hospitalizations, that’s where you see people that aren’t vaccinated showing up the most and so you want to encourage people to get it.”

“It’s not something where you go off what someone says on the internet,” Scalise told ABC affiliate WGNO about vaccinations shortly after receiving his second dose in New Orleans. “You talk to your doctor about any health decision, and this is one of those.”

More than 2,800 people are hospitalized with COVID-19 in Louisiana — hundreds more than the state experienced during the last coronavirus surge. Until Tuesday, when it was overtaken by Florida, Louisiana led the country in new COVID-19 cases. Just 37% of the state is fully vaccinated, among the lowest rates in the country.

Louisiana’s Democratic Gov. John Bel Edwards, who recently reinstated a new indoor mask mandate to help stem the spread of the virus, said on Twitter that he and his wife would be fasting and praying for frontline health workers and residents affected by the pandemic. And the state’s top health official suggested more aggressive measures might be required.

As GOP governors in nearby Texas and Florida have taken steps to prevent local communities and schools from implementing new mask mandates — with Gov. Ron DeSantis of Florida even threatening to withhold pay from public educators who implement them — Scalise, the No. 2 Republican in the House of Representatives, said “ultimately those are conversations that need to be had at the school-board level.”

“I would encourage people to stay involved at the local level, having those conversations where they should be had, not at the federal level,” he said. “Let people in the local communities make the decisions that are best for themselves and open up the schools.”

Asked about Republican Arkansas Gov. Asa Hutchinson, who recently said he regretted signing into law a ban on local mask mandates in the spring, Scalise said, “let those local conversations be had.”

Scalise, who has criticized recently updated federal mask guidance from the Centers for Disease Control and Prevention, did not attack the Defense Department’s announcement that it will request approval for the COVID-19 vaccine to become mandatory for all U.S. military service members by mid-September, saying that he would “leave it to the generals to determine what’s best to run the military.”

“I still don’t want to see the federal government make those kinds of mandates,” he added.

The Louisiana Republican, who was first eligible for his vaccine in December as a member of Congress, received his first dose in July. Asked about the delay, Scalise said he waited because of a positive antibody test, which suggested he had previously contracted the virus. The CDC has found that the COVID-19 vaccines provide more robust protections against the virus than antibodies from prior infections.

“Ultimately with the delta variant, I saw the spike in hospitals and primarily as over 98% of people in the hospitals with COVID were unvaccinated. And that’s when I decided to get the (vaccine),” he said. “I’m very glad I did it, it’s very safe and effective.”

Separately, Scalise said he plans to oppose the bipartisan infrastructure bill, approved by the Senate earlier Tuesday, when it is taken up in the House, because of the Democrats’ plans to pair it with a more expansive, $3.5 trillion policy package they plan to advance with only Democratic votes.

Seventeen Republican senators voted with all of the Democrats to advance the $1 trillion infrastructure measure Tuesday.

“It’s less about infrastructure and more about taxes and spending, and Speaker Pelosi made that very clear,” he told ABC News Live. “There is a whole lot of spending that has nothing to do with infrastructure, and they’re going to be tax increases that are going to hurt jobs it’s going to hurt middle class families.”