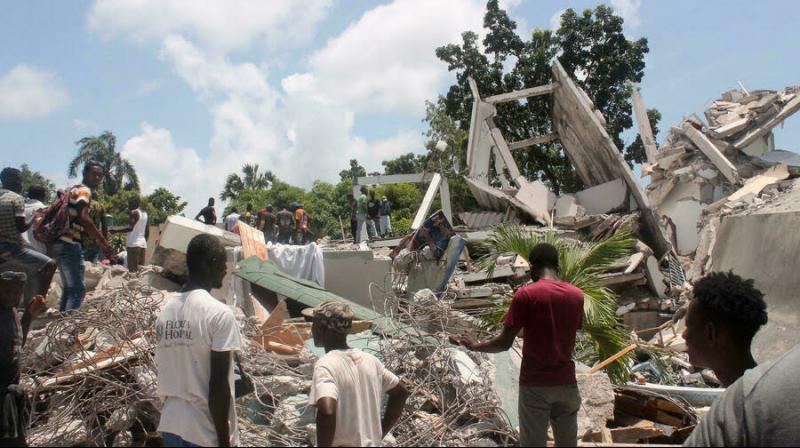 Les Cayes: The death toll in Haiti's powerful earthquake jumped to over 700 on Sunday as crews desperately dug through collapsed buildings for survivors in the Caribbean nation still reeling from its president's assassination.

At least 724 people were killed in the 7.2-magnitude tremor that struck Saturday about 100 miles (160 kilometers) to the west of the densely populated capital Port-au-Prince, which was devastated in a massive 2010 quake.

Churches, businesses, schools and homes crumbled in Saturday's quake that trapped hundreds of victims under rubble and left at least 2,800 people injured, the country's civil protection agency said in an update.

Heavy damage was reported in the center of the city of Jeremie, home to around 200,000 people and composed primarily of single-story buildings.

The damage in the city of Les Cayes also appeared to be significant, including the collapse of a multi-story hotel.

Amid ongoing fear of aftershocks, virtually the entire population of that city spent Saturday night outdoors, sleeping in front of their homes or what was left of them.

Rescue efforts could be hampered by Tropical Storm Grace, which is expected to bring heavy rainfall and possible flash floods to Haiti from late Monday, according to the US National Weather Service.

USAID head Samantha Power tweeted Sunday that her agency had deployed an urban search and rescue team to join its earthquake disaster response team in Haiti.

Haitian Prime Minister Ariel Henry, who surveyed the damage via helicopter, declared a state of emergency for one month while calling on the nation to "show solidarity" and not panic.

More than 1.5 million Haitians were made homeless in that disaster, which also destroyed 60 percent of Haiti's healthcare system, leaving island authorities and the international humanitarian community with a colossal challenge.

Heavy damage from a powerful earthquake was reported in the center of the city of Jeremie, seen here on August 14, 2021

Heavy damage from a powerful earthquake was reported in the center of the city of Jeremie, seen here on August 14, 2021 Tamas JEAN PIERRE AFP
The latest quake comes just over a month after President Jovenel Moise was assassinated in his home by a team of gunmen, shaking a country already battling poverty, spiraling gang violence and Covid-19.

Police say they have arrested 44 people in connection with the killing, including 12 Haitian police officers, 18 Colombians who were allegedly part of the commando team, and two Americans of Haitian descent.