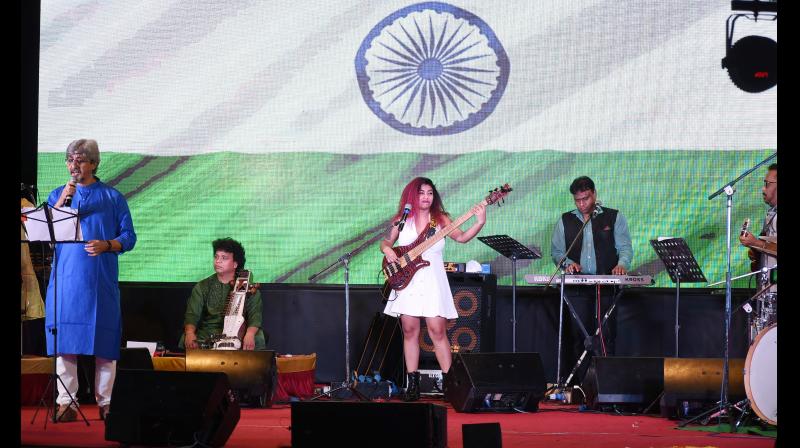 Even as it was being live streamed on social media, the evening started off with a soulful Sarangi recital by Farooque Latif Khan according to whom it is a misconception that Sarangi is difficult to learn and is an instrument of sorrow.
“This program shows how Sarangi and western rhythms can create joyous and energetic sounds,” he says.

Incidentally, this was Farooque Latif Khan’s first live show after nearly 16 months, having done just a single online programme during the pandemic. “I’d devoted all my time in pandemic for riyaaz (practice),” he tells us.
Singer Arnab Chatterjee kept up the patriotic flavour by singing a medley of songs, which included Mera desh ki dharati, Yeh mera India, Raghupati Raghava Raja Ram and Sare jahan se accha. The music was provided by Shashank Acharya on the flute, Mohini Dey on the bass guitar, Sambit Chatterjee on the drums, Shadaab Shakoori on the tabla, Umer Khan on the keyboard and Sujoy Dey on the lead guitar.

“Every member of the team is highly talented and we hardly needed any rehearsals,” points out Arnab. “All the songs were rendered at a pace much different from the original score and with a flavour of fusion music.”
Interesting part of this performance was the break-away solo pieces by each musician who brought in the speciality of their instrument. Shadaab and Sambit created a rhythm ‘jugalbandi,’ which also involved the audience clapping to the beats.
On many occasions, one could note the lightning speed of Mohini Dey on her bass guitar, the magical movement of fingers truly showing her prowess on the bass. It is no wonder that she has already been featured on Coke Studio, has performed with Ranjit Barot and A R Rahman, and has many Bollywood recordings to her credit.

Mohini’s dad Sujoy Dey, who performed on the lead guitar, says “I’ve been seeing Mohini grow before my eyes as one of the few women bass guitarists of the country.”
While his dad played the mouth-organ and many of his relatives play guitar, Sujoy tells us how he likes any music that has a ‘soul’. “It could be Indian classical, jazz, rock, pop or fusion music. Passion and practice bring in the ‘soul’ element in music,” he says.

Shashank Acharya made flute playing look easy, bringing in many variations in sound and continuous dialogues with lead guitar and drums. Incidentally, Shashank is a disciple of the flute maestro Pandit Hariprasad Chaurasia and has performed frequently with Bollywood singer Mohit Chauhan. He added to the patriotic flavour by rendering Vande mataram on the flute.
The evening concluded with a serene rendition Bharat humko jaan se pyara hai by Umer Khan. It was a truly invigorating experience of pulsating beats and melody for the audience at Ravindra Bharati and those who experienced it online.

Five self-care tips from around the world, from forest bathing to face tapping

As Kate comparisons left Kim Kardashian in tears, here’s why you should never compare yourself to anyone else

When are the car companies switching to fully electric models?