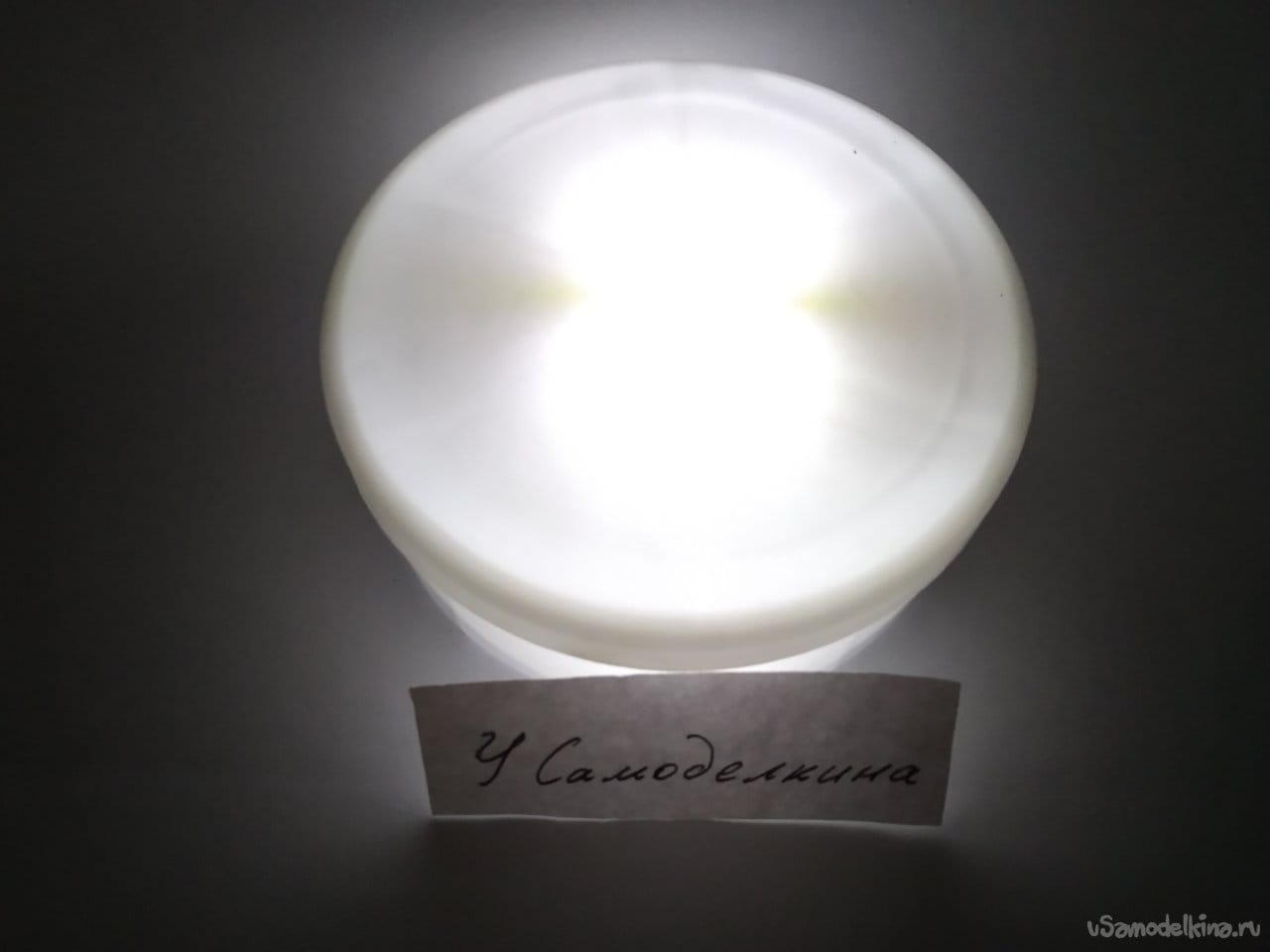 Hello. In this article, I'll show you how to make a simple battery powered night light. The main design feature of this device is the absence of an external switch on the body of the night light. The luminaire is controlled by changing its position in space. Simply put, in order to turn on or off the night light, you need to turn it over. Rotating the device causes a small weight to move under the action of gravity inside the housing, which in turn closes the contacts. As you can see, the principle of the night light is extremely simple.
The following tools and materials were used for manufacturing:
– soldering iron;
– file of rectangular section;
– wire cutters;
– plastic box from tooth powder;
– solder;
– flux;
– a fragment of a breadboard;
– connecting wires;
– SMD LEDs (2pcs);
– a ferrite ring from an energy-saving lamp;
– bipolar transistor (kt315);
– resistor (1kOhm) ;
– holder for three AA batteries;
– contacts from a faulty relay;
A standard holder for three AA batteries served as a basis for assembling the night light. Since it was originally supposed to power the luminaire from one battery, it was decided to leave the middle compartment for installing the electrical circuit, and use the outer compartments to install the batteries.
Since such a holder was created to connect batteries in series, its design had to be changed to connect two cells in parallel. To do this, just solder the wires, as shown in the photo below: 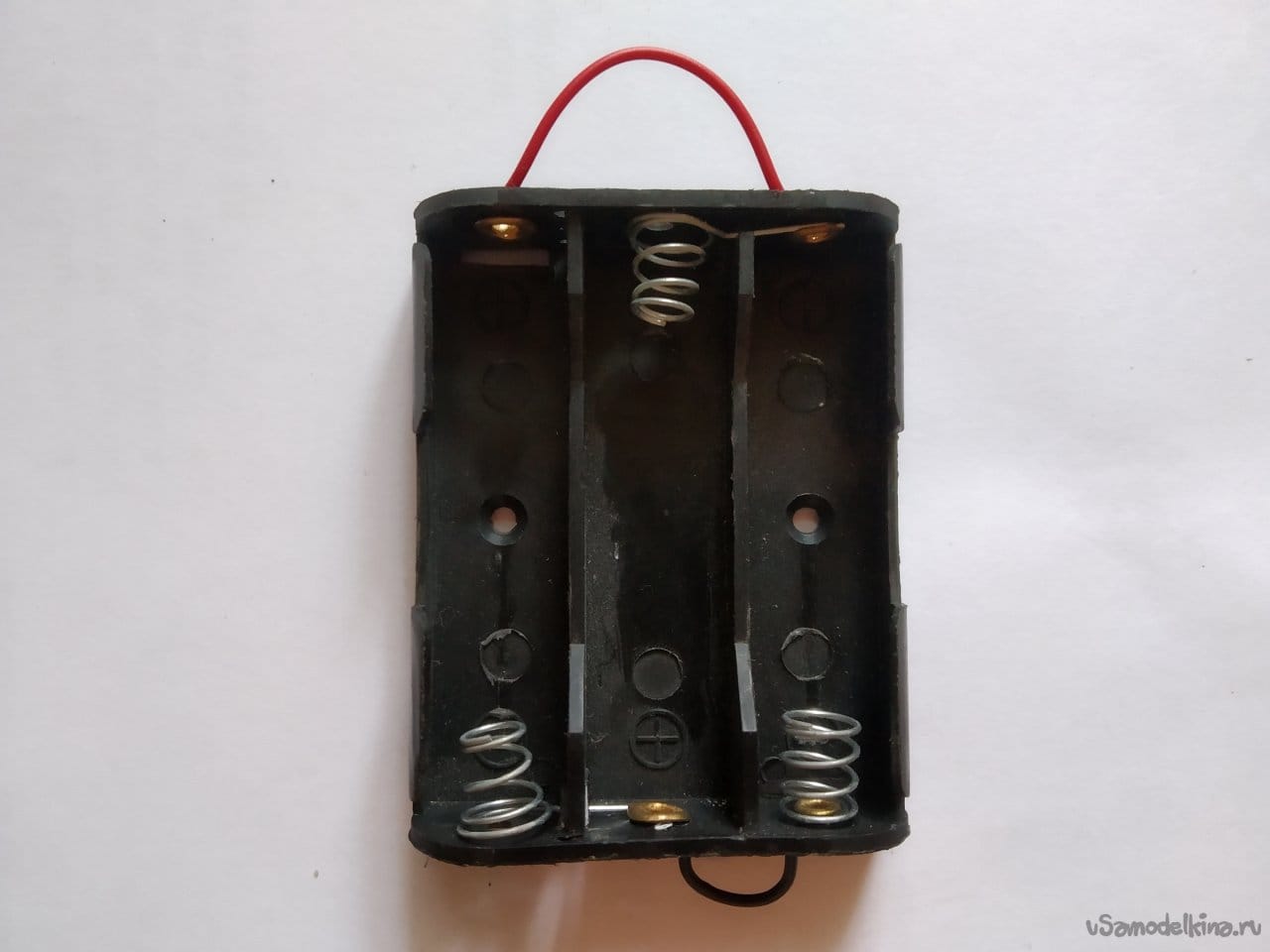 Here the reader may have a natural question, why not use two batteries connected in series and power the LEDs directly without any converters, thereby simplifying the circuit? There are several reasons for this, firstly, the LED will work normally only from new batteries, the voltage of each of which will be in the range of 1.4 – 1.5 V. Accordingly, as soon as the voltage on the batteries drops below about 1.2 – 1.3 The lamp will stop working. Secondly, obviously, you need exactly two batteries. The use of a circuit with one battery and a converter allows the battery to be discharged to a voltage of 0.8 – 0.9 V. In addition, you can use one battery, or install two to increase the total capacity and extend the life of the device (the only condition is to use a battery with the same or as close as possible voltage value, otherwise if, for example, one battery was originally installed in the lamp, and after a while another, new one was added, then the battery installed earlier will act as a consumer due to the low voltage, discharging the new battery until equal voltage between them).
Making a night light should start with assembling a circuit that provides power to the LEDs. For this, a well-known scheme was chosen, the so-called “joule thief”. The circuit is pretty simple, apart from the LEDs, it only includes three parts: a resistor, a coil, and a transistor. Specifically, in this circuit, an old domestic transistor kt315 was used, but instead of it you can use any analogous one, for example, from among foreign ones – BC547. The essence of the operation of the circuit is quite simple, a voltage is applied to its input, the value of which is in the range from 0.8 V to 1.5 V, and which is not enough for the operation of the LED. In the process of operation, the circuit generates high voltage pulses at its output, which serve to power the LED. The electrical circuit diagram of the night light is shown in the photo below: 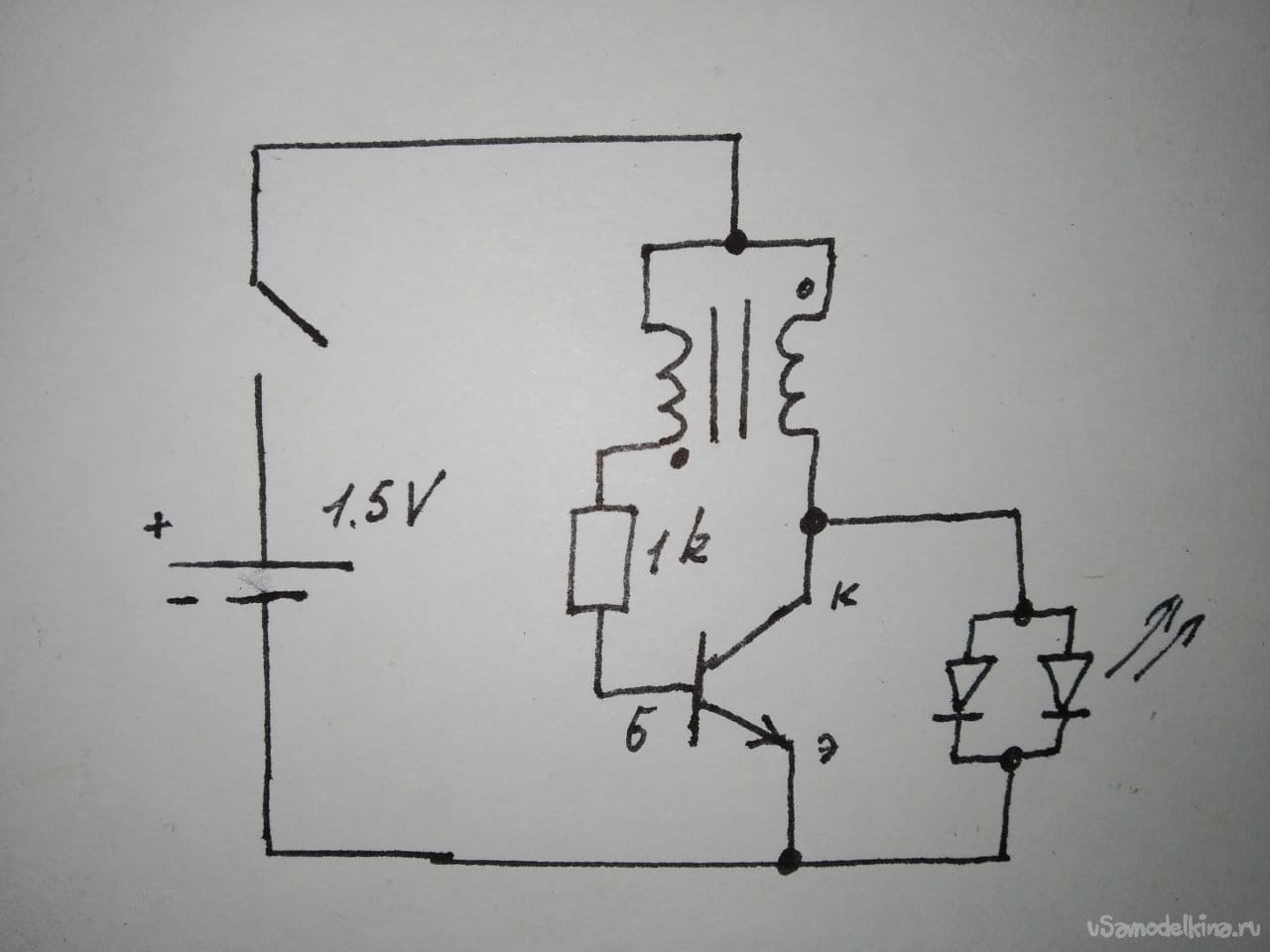 A fragment of a printed circuit board was used to assemble the circuit. Its size Chosen to fit over the middle battery compartment. 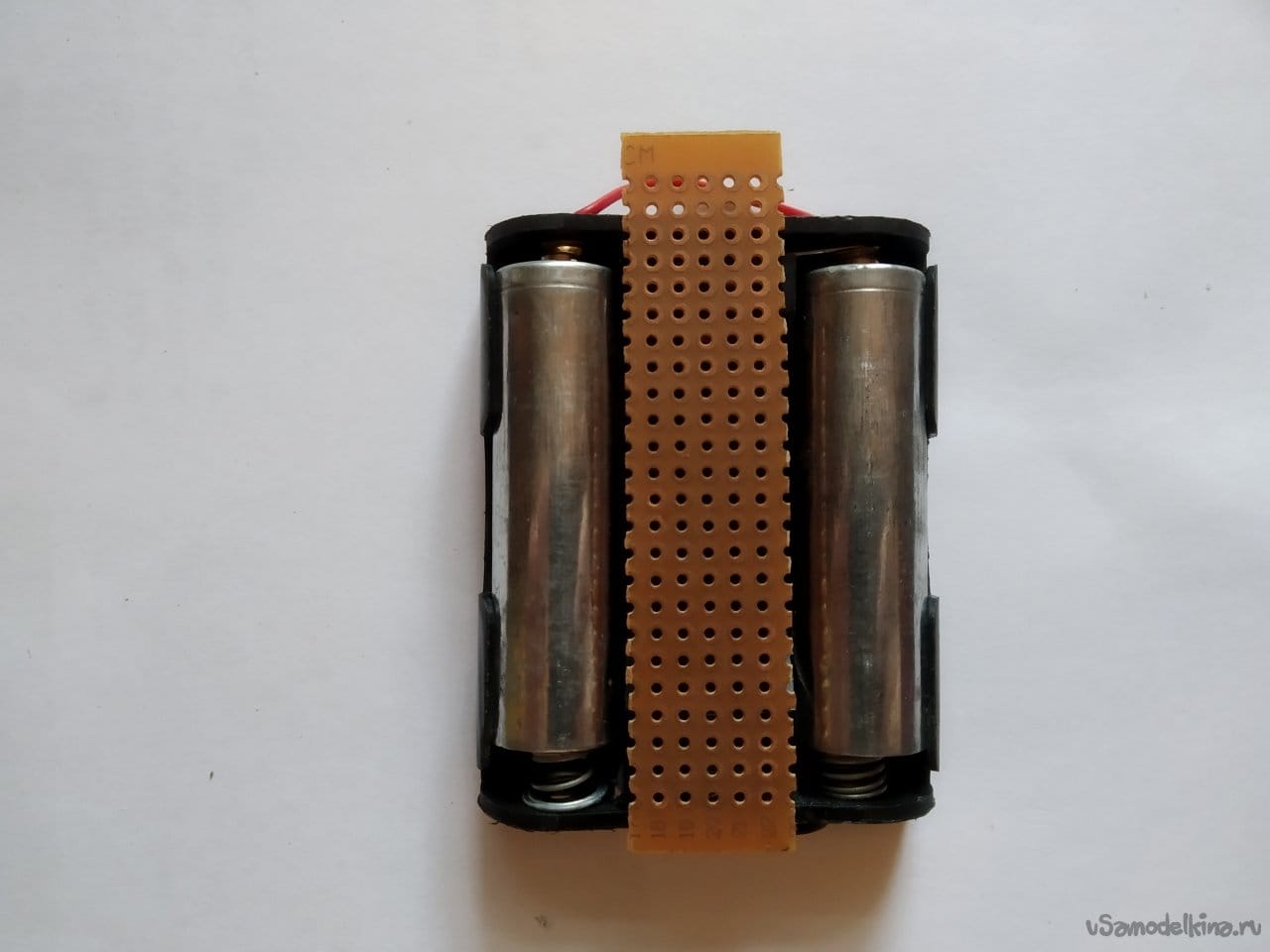 After that a coil was assembled, a ferrite ring from an energy-saving lamp was used as a core. 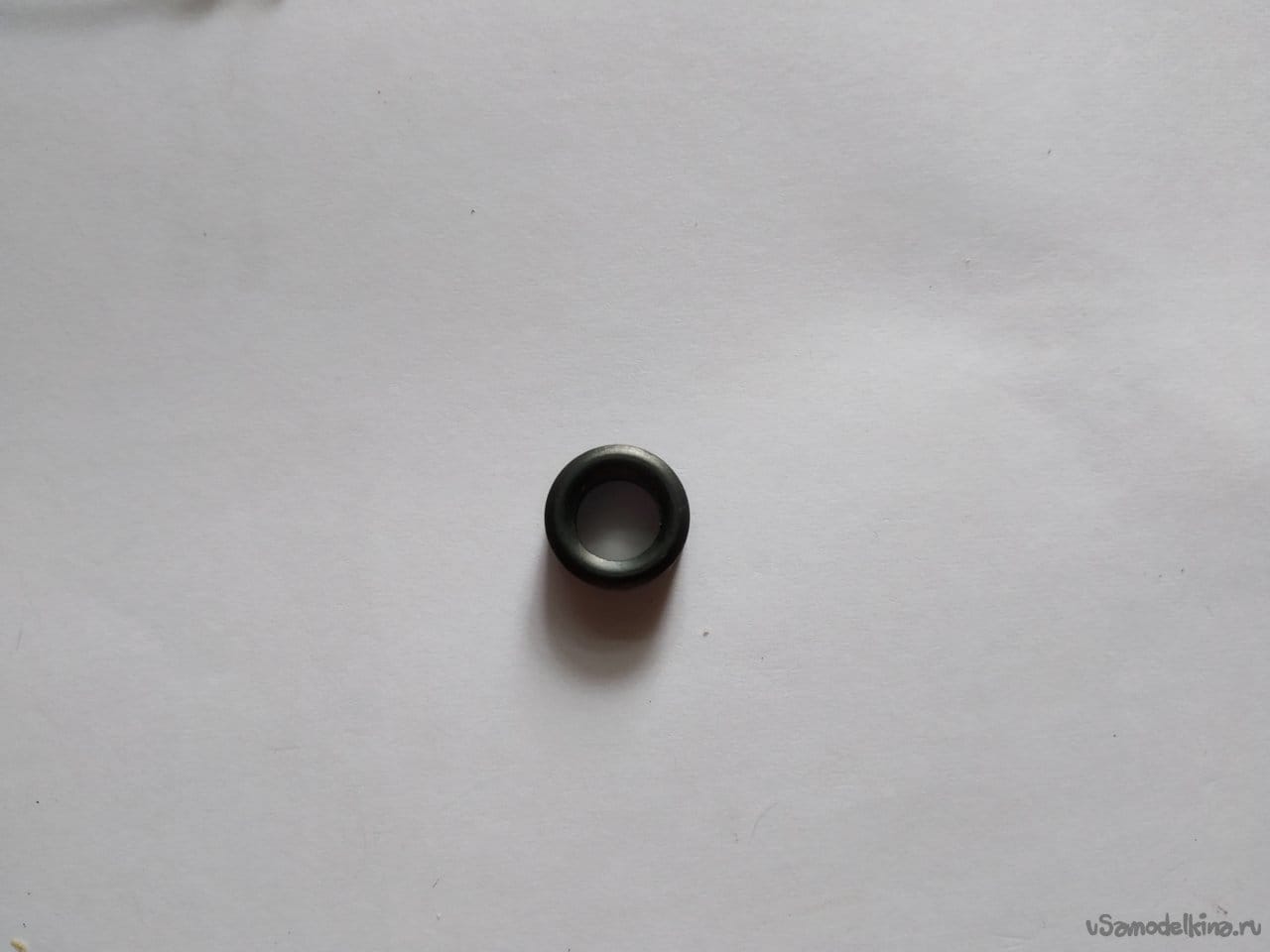 Winding was made with two pieces of wire. Twisted pair is perfect for this. You can also use a winding wire in enamel insulation. 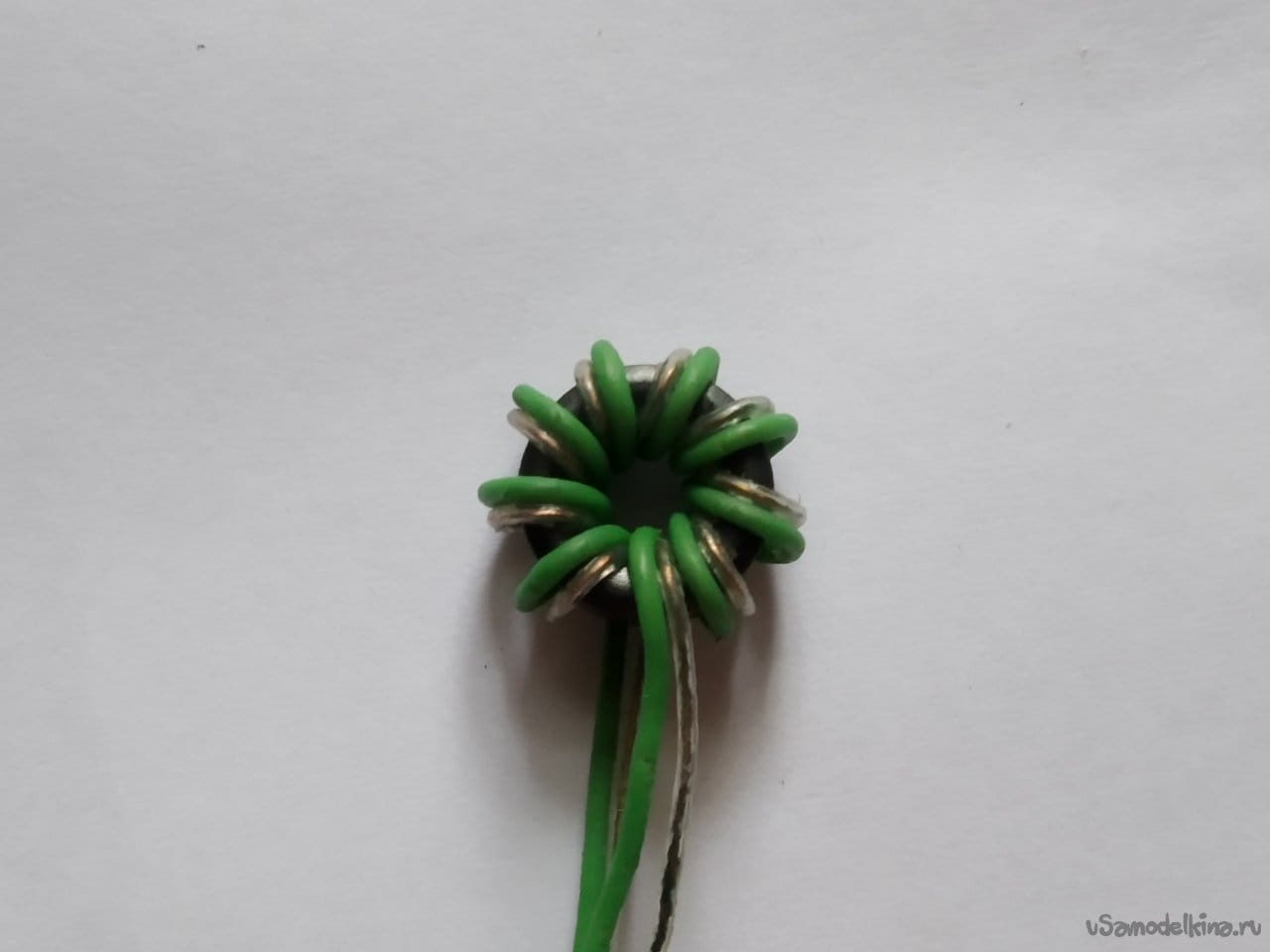 to form a branch from the middle for this, the beginning of one winding and the end of the other are connected as shown in the photo. For greater clarity, wires in insulation of different colors are used. 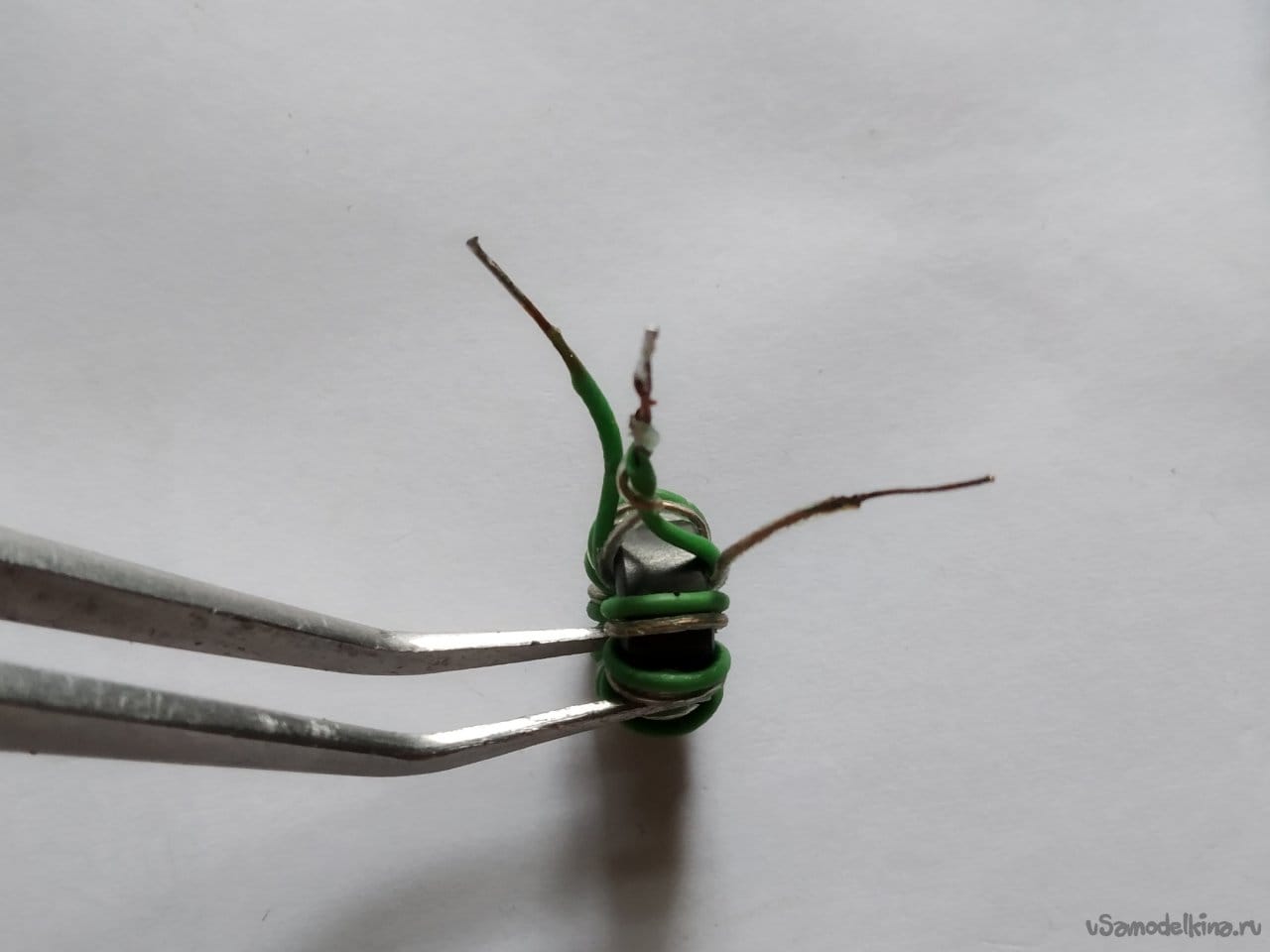 After that the main part of the circuit can be assembled on a breadboard and proceed to soldering the LEDs. I used two SMD LEDs similar to those used in LED strips.
For a more efficient distribution of the luminous flux, it was decided to place the LEDs at an angle with respect to the breadboard. For convenience, a stand was assembled, consisting of a magnet and an ordinary match. The magnet is used to fix the LEDs, and the match acts as a support. After all the elements of this simple design are installed in their places, it remains only to solder the tinned wire to the terminals of the LEDs, while you should not forget about observing the polarity of the LEDs.
Next, you need to solder the U-shaped contact made of tinned wire to the free leads of the LEDs.
< img class = "aligncenter" alt = "Battery powered night light with gravitational switch" src = "https://usamodelkina.ru/uploads/posts/2021-08/1628870788_img_20210811_133845.jpg"/> As a result of the manipulations, the following construction was obtained, which remains to be installed on the breadboard and connected to the rest of the circuit. 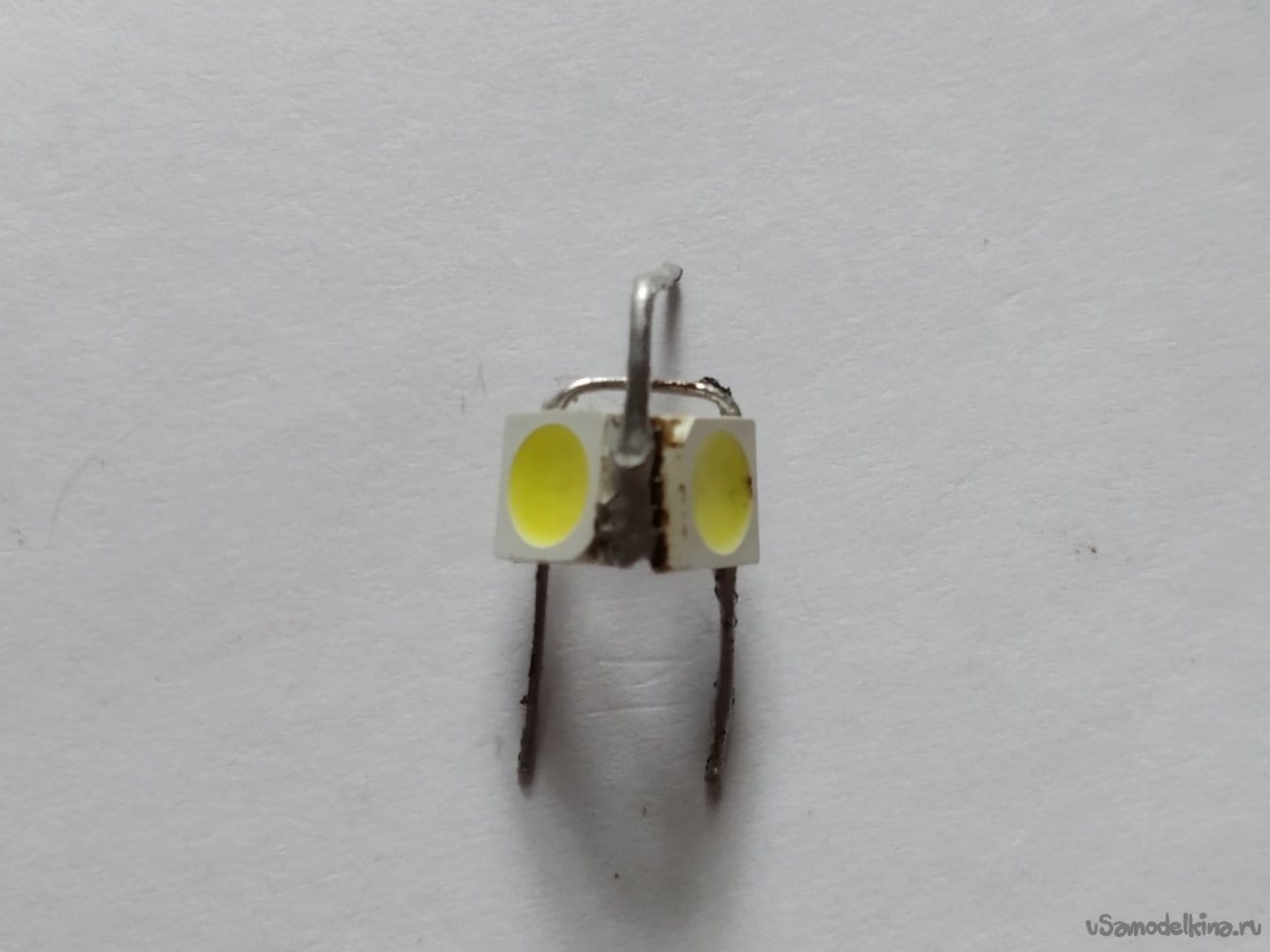 Now you can proceed to the final part of assembling the electrical circuit, namely, creating a switch. To do this, you need two contact lugs from the faulty relay.
In the photo you can see that the contact tabs are equipped with inserts similar to rivets, these elements are made of a special alloy (usually based on silver) to ensure low resistance between the contacts to be connected. In this case, this is very important, because when connecting low-voltage power, even a small contact resistance of a few ohms can be critical.
One contact lug must be slightly trimmed and soldered to the breadboard as shown in the photo:
A small piece of wire from the twisted pair was soldered to the second petal, after which the petal itself was soldered over the first. A nut is attached to a piece of wire under the weight of which the contacts are closed. 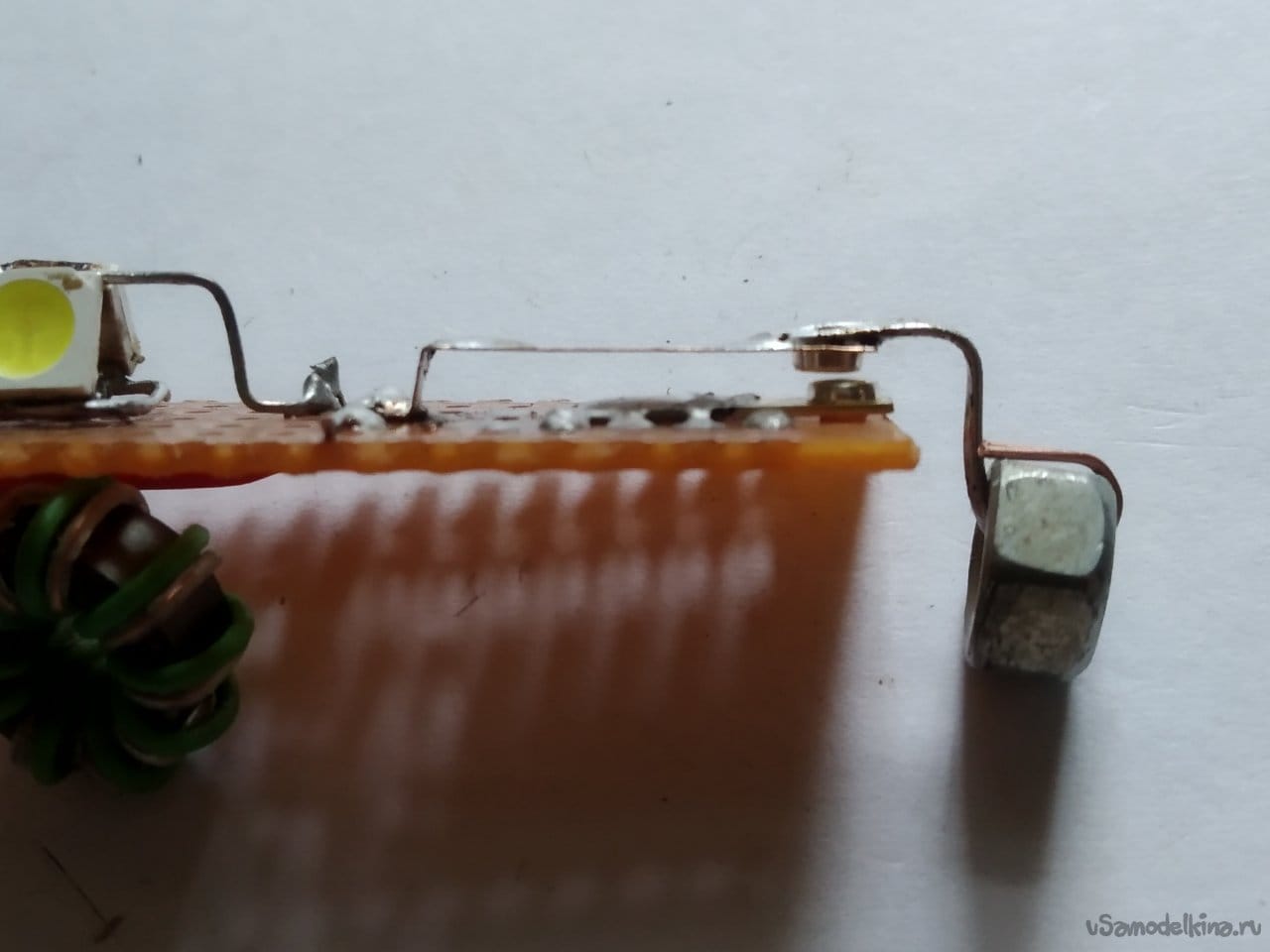 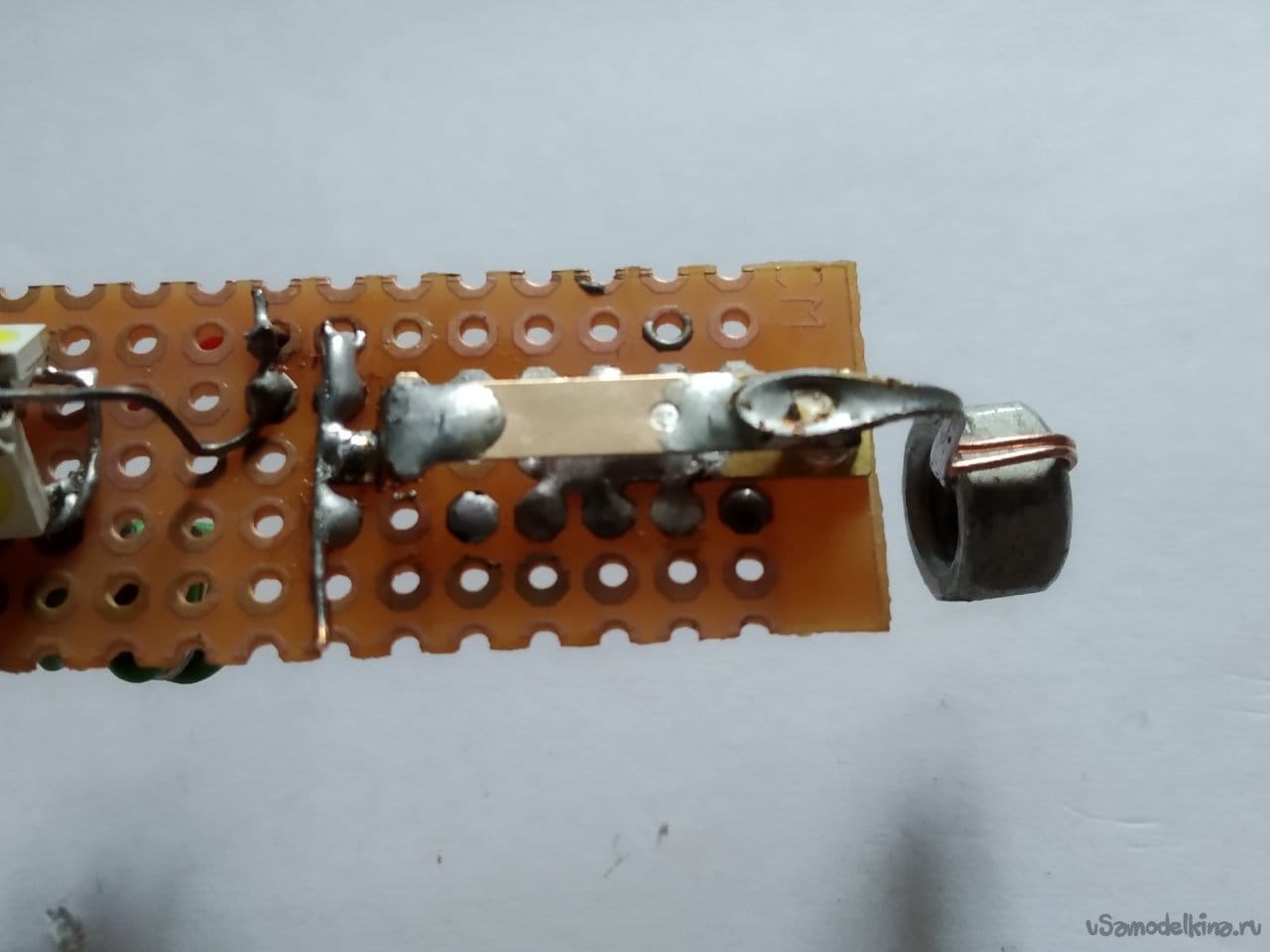 After that how the whole circuit is assembled and tested it can be attached to the battery holder, for this a piece of wire from a twisted pair was used. 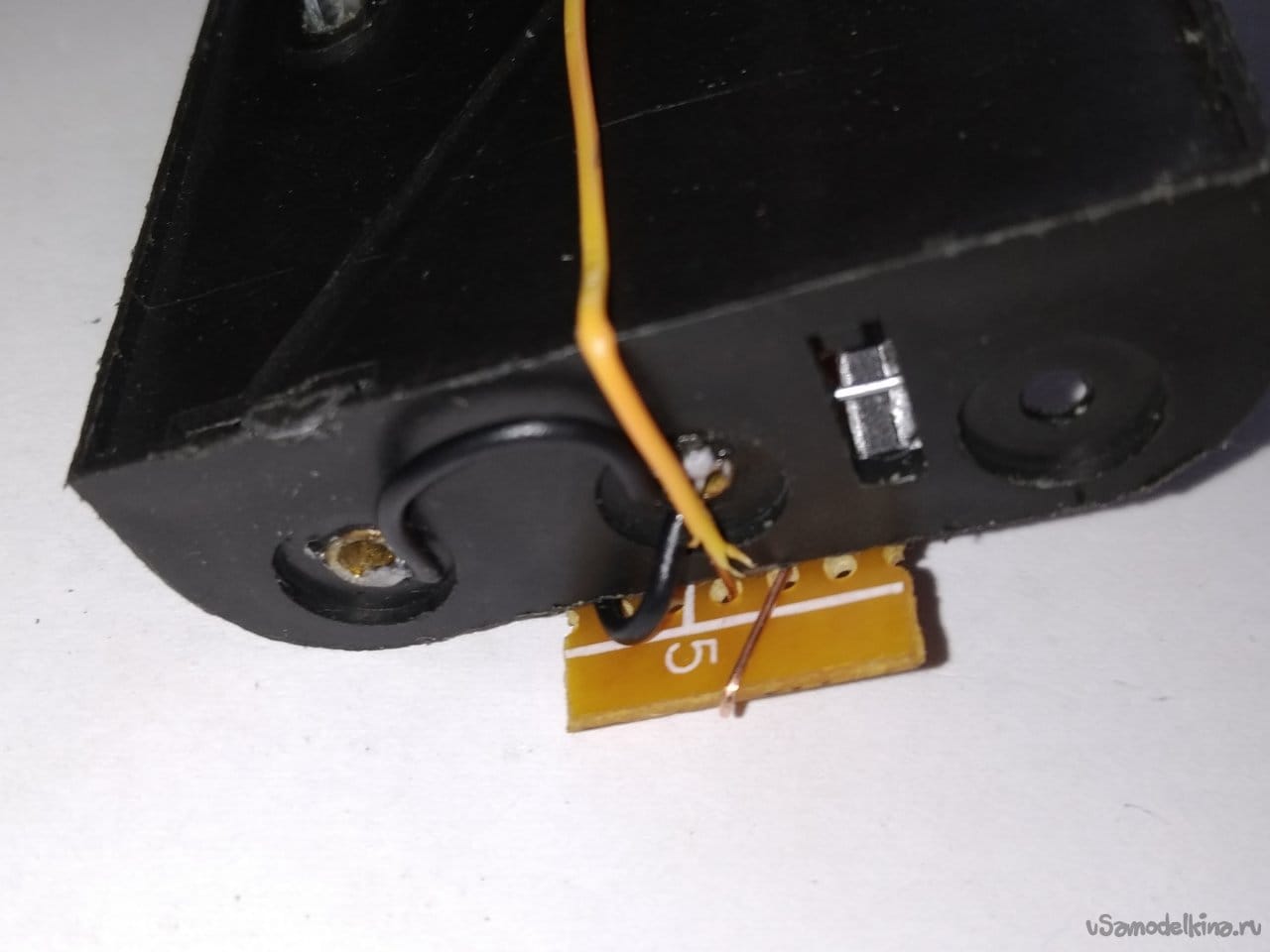 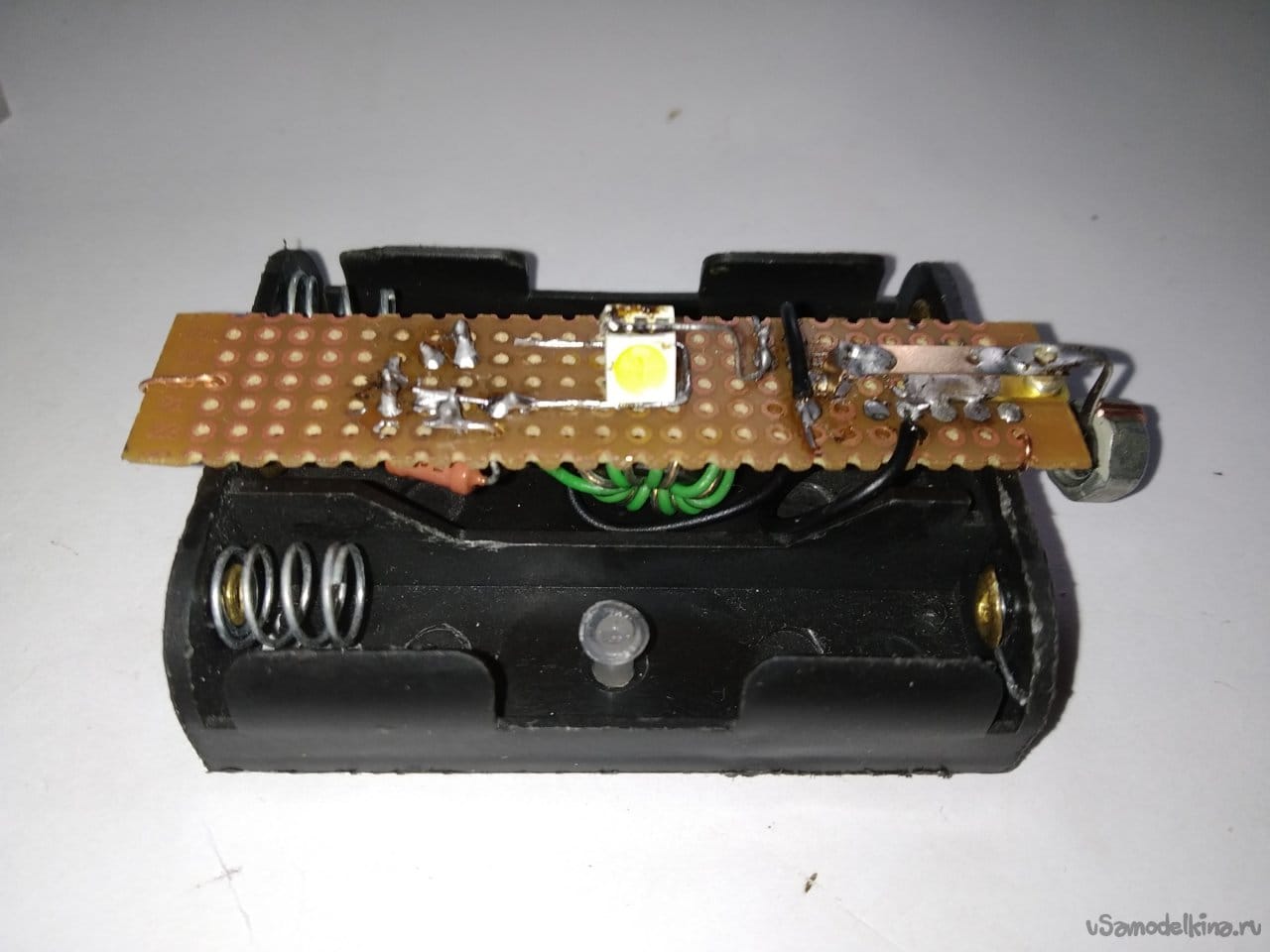 It remains only to install the outer casing, which, in addition to the main function, should play the role of a light diffuser. For this purpose, plastic packaging made of tooth powder was perfect. 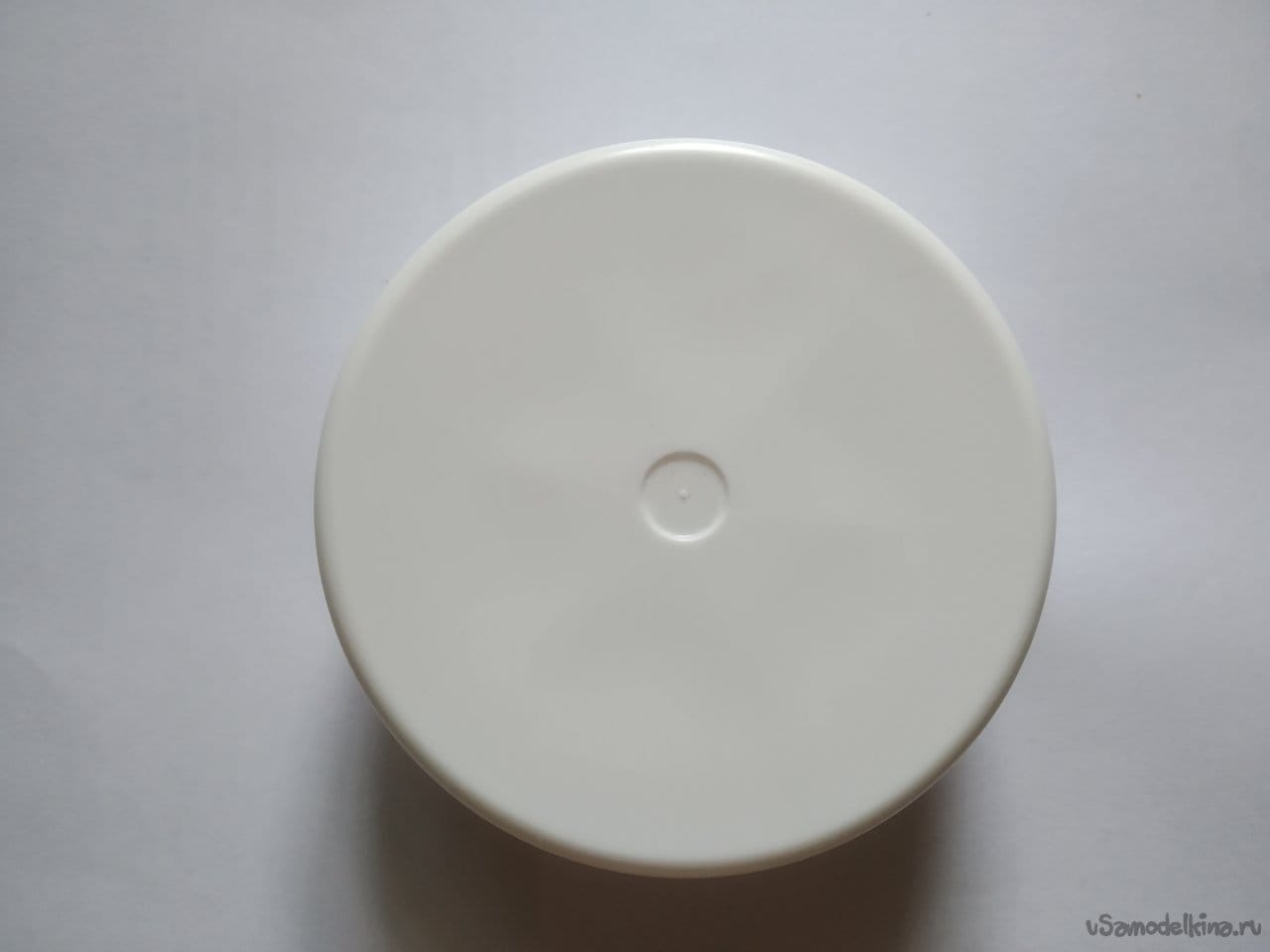 There are two mounting holes in the battery holder, it was necessary to drill the corresponding holes in the bottom of the package. To connect the structural elements, plastic rivets made from the shaft of a ballpoint pen were used. 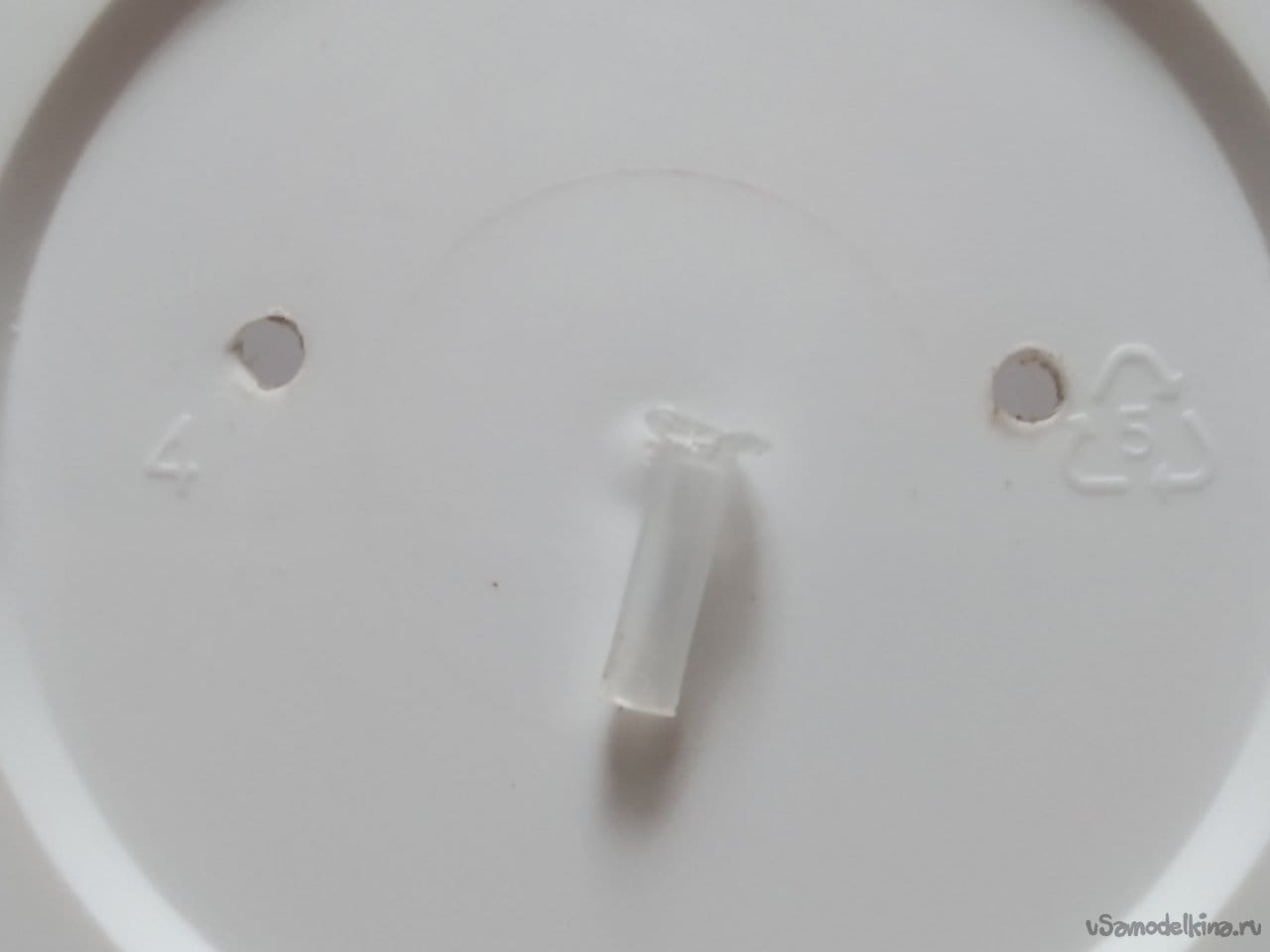 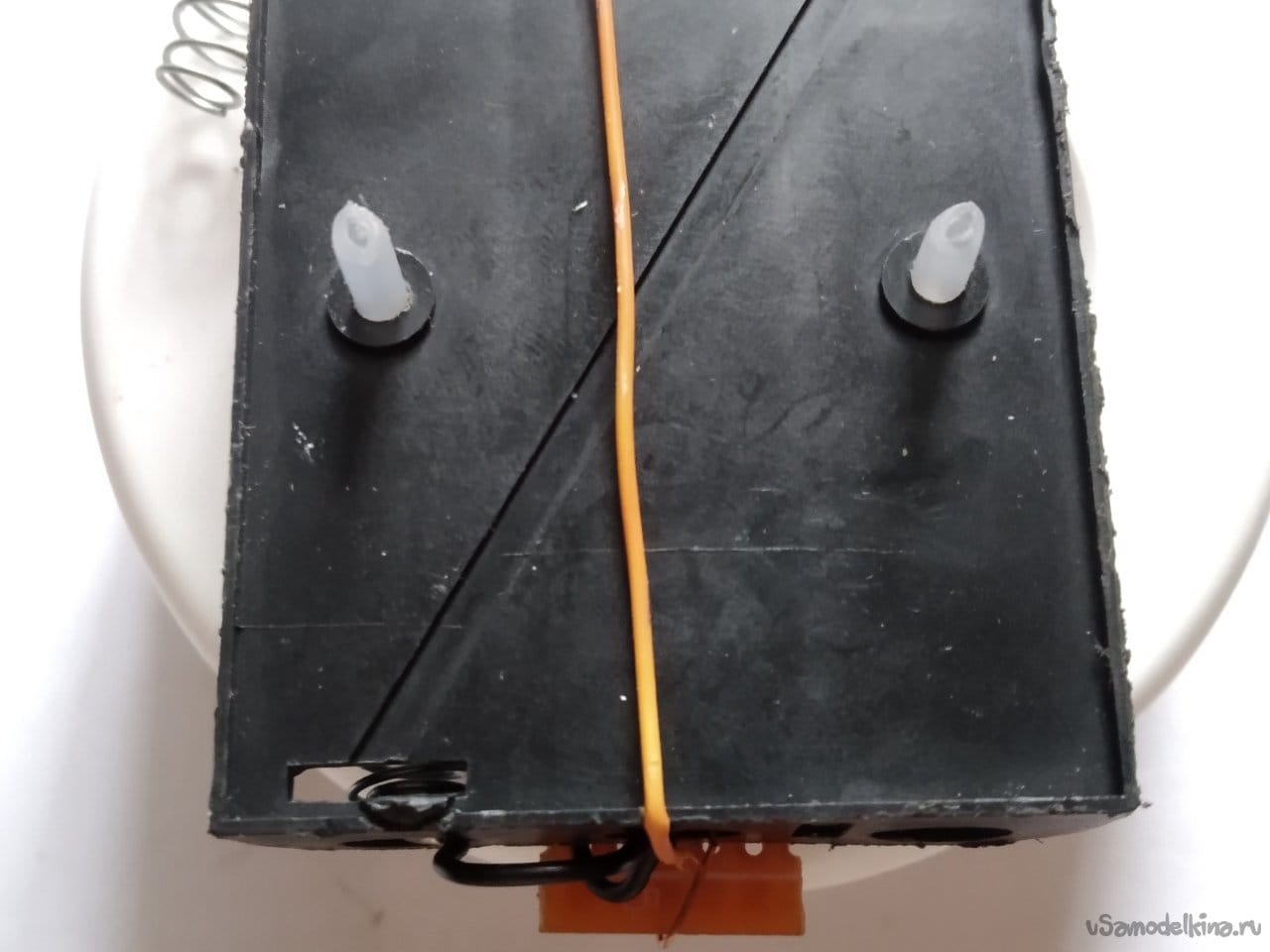 After installing rivets in the holes of the case, the protruding ends were melted with a soldering iron. 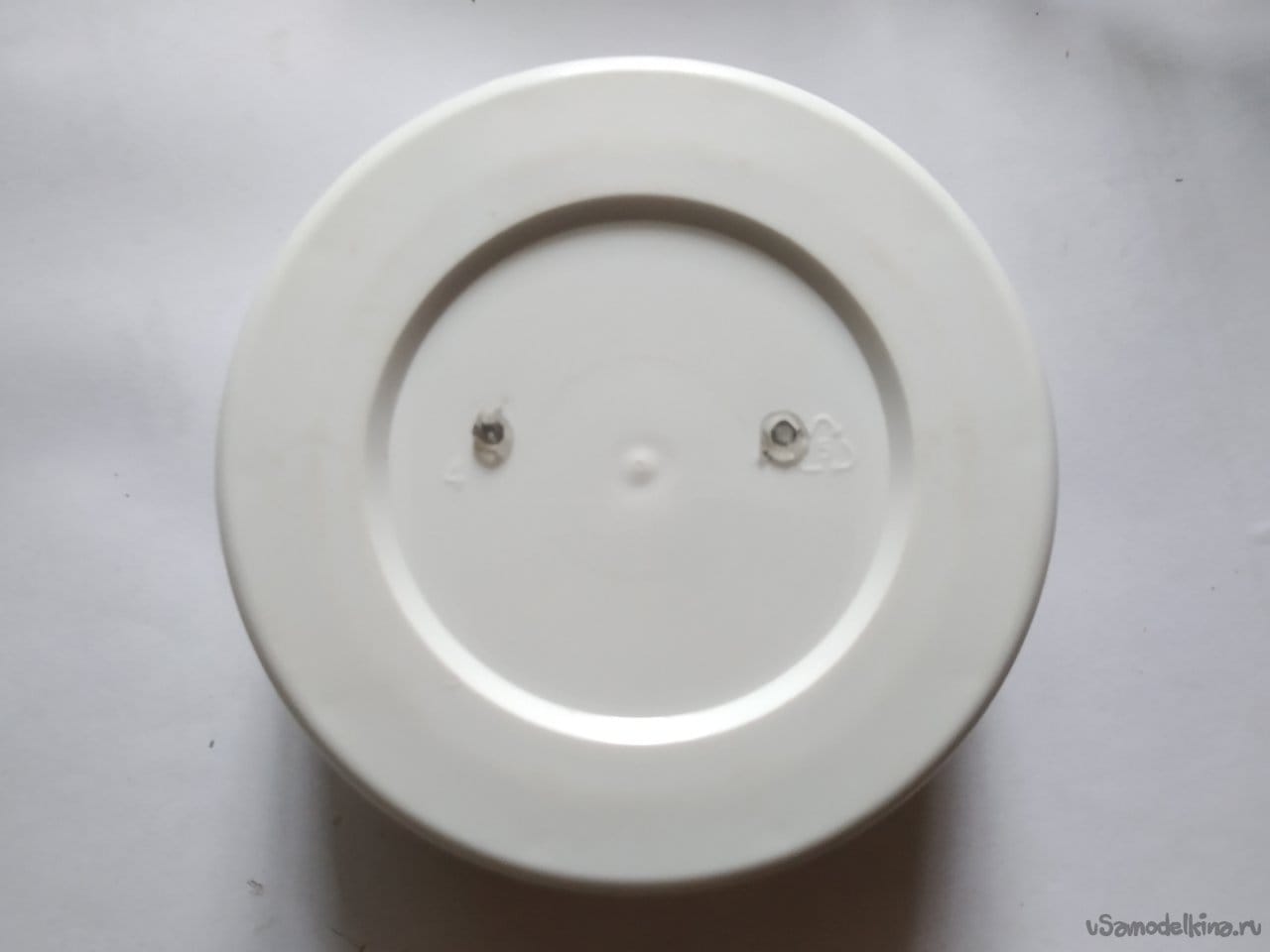 In the process of testing the finished device, a drawback was discovered, due to the low weight of the nut fixed on the contact lever, at the moment of closing and opening of the contacts, small vibrations appeared, which led to short-term flickering of the LEDs. In general, this did not affect the performance of the night light, but in order to increase the reliability of the contact to the main nut, it was decided to attach two more, this made it possible to reduce parasitic flickering at the moment of changing the position of the lamp to a minimum. 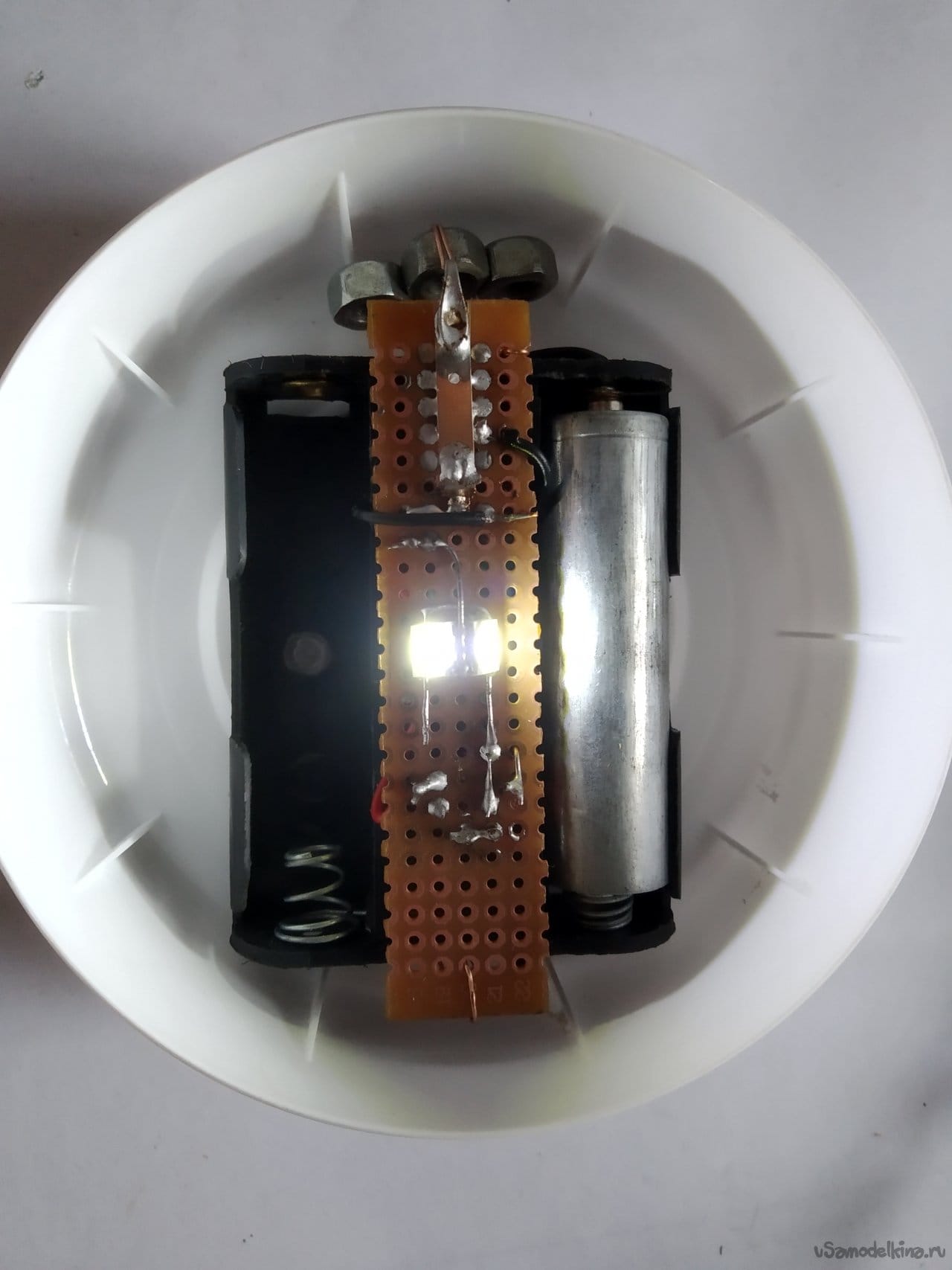 In the photos below are images of the finished device. Unfortunately, the camera does not adequately convey the brightness of the light emitted by the night light. 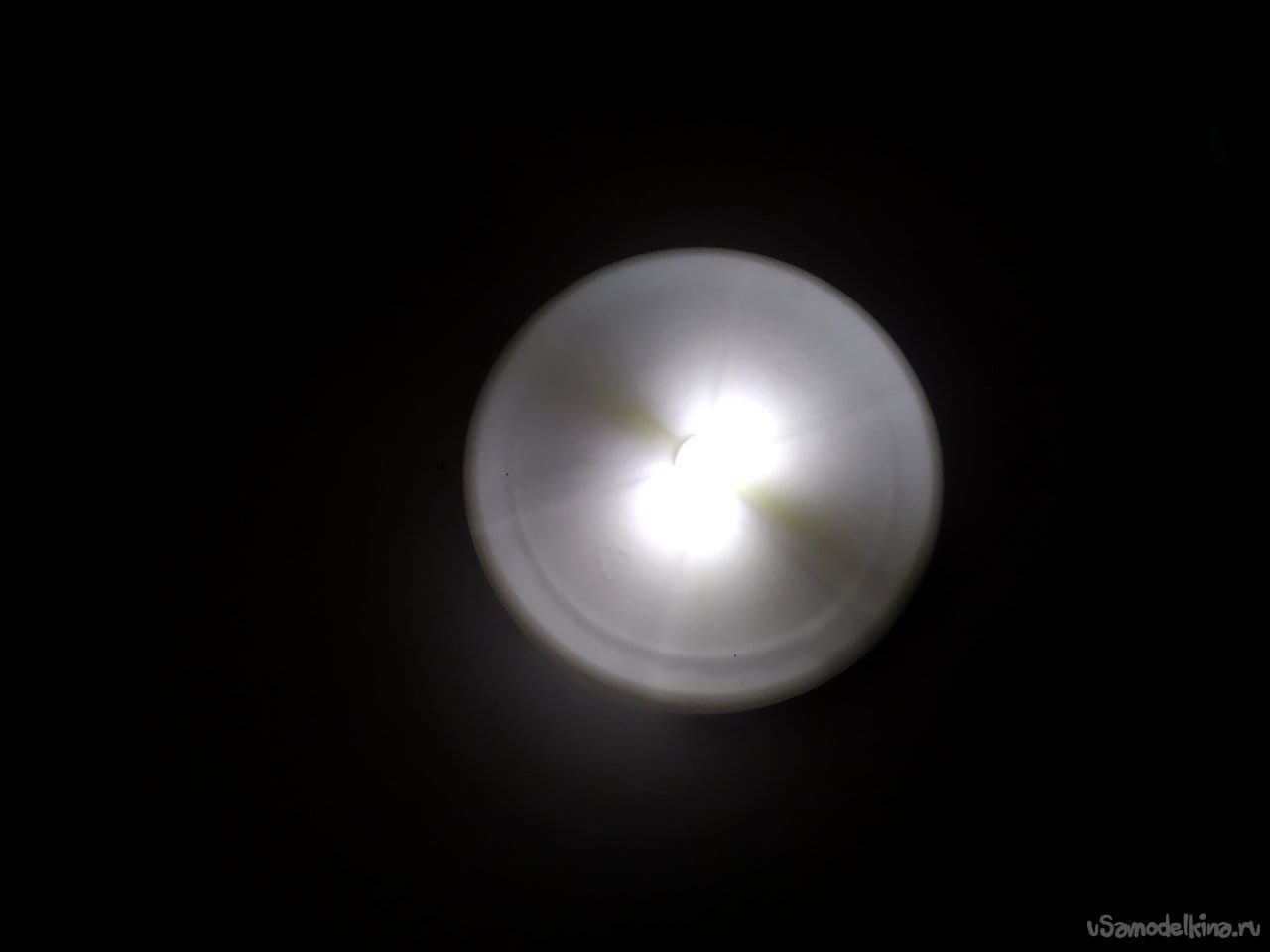 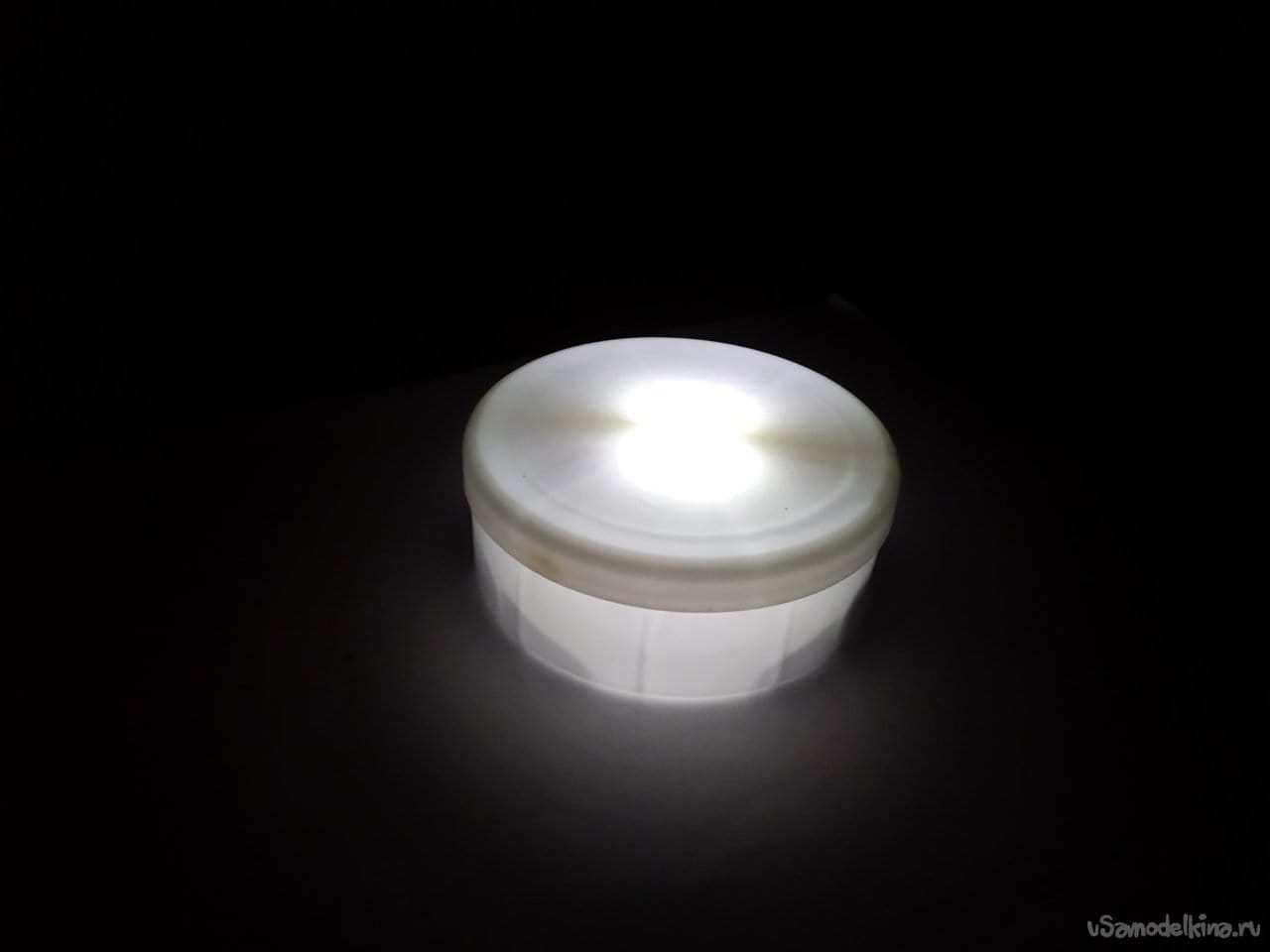 I came up with a reliable, simple H-bridge

Door for a cat, with outdoor temperature control and magnetic lock