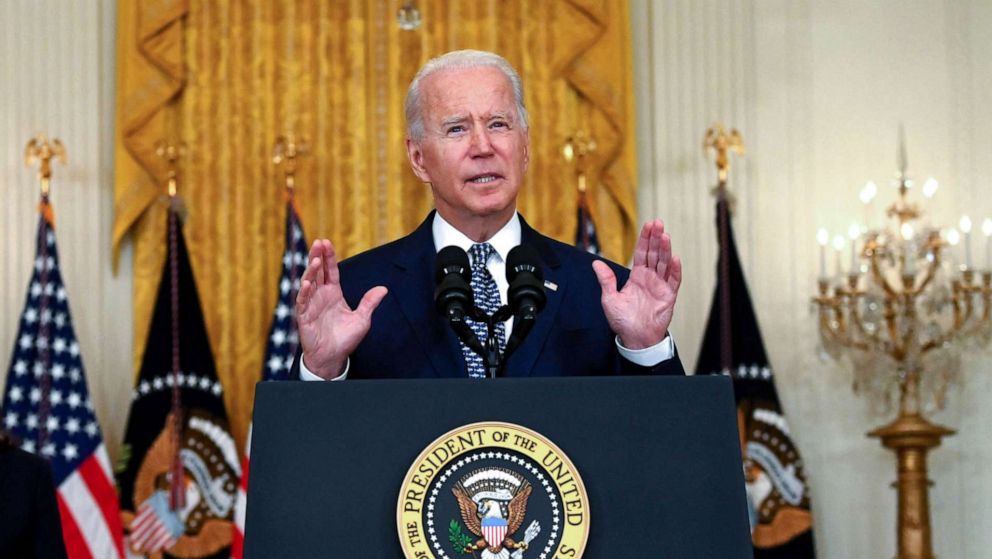 President Joe Biden on Tuesday marked the Senate’s passage of a bipartisan infrastructure plan earlier in the day with a White House speech touting the political win and thanking Republican senators who voted with Democrats for what he said was their “courage” to come together to strike a deal for the American people.

“After years and years of infrastructure week, we’re on the cusp of an infrastructure decade that I truly believe will transform America,” Biden said in triumphant remarks delivered from the White House East Room.

Biden praised the bipartisan negotiators, touching on themes from his candidacy — the idea that this 36-year veteran of the Senate could reinvigorate the bipartisan cooperation of an era gone by.

“I want to thank the group of senators, Democrats and Republicans, for doing what they told me they would do. The death of this legislation was mildly premature as reported. They said they were willing to work in a bipartisan manner. And I want to thank them for keeping their word. That’s just what they did,” Biden said.

“This bill shows that we can work together,” he continued. “From the time I announced my candidacy, and bringing the country together, doing things in a bipartisan way, it was characterized as a relic of an earlier age. I never believed that, and still don’t.”

Biden also gave an unusual, specific shout-out to Senate Minority Leader Mitch McConnell, who voted with 18 other Republicans to pass the bill.

“I want to thank the Republican — Senate Republican leader Mitch McConnell for supporting this bill,” Biden said. “And special thanks to Senate Majority Leader Chuck Schumer. Your leadership, Chuck, in the Senate was masterful.”

But the bill is not close to becoming law yet.

Biden’s victory lap is somewhat premature given a weeks or months-long delay in final passage could lie ahead. Biden did note that there was still a lot of work to be done to get the bill on to his desk.

“Look, let’s be clear. The bill is far from down,” Biden continued. “The bill goes to the House of Representatives where I look forward to winning its approval. We have to get to work on the next critical piece of my agenda, my Build Back Better plan,” he said, referring to the need to have the House pass the bipartisan bill, while House Speaker Nancy Pelosi continues to insist she receive the $3.5 trillion Democratic budget bill before she will hold a vote on the bipartisan package.

Assuming that the Senate votes out the $3.5 trillion budget resolution this week, Majority Leader Steny Hoyer’s office announced late Tuesday that the House will return the week of Aug. 23 to vote on that bill — cutting its recess short. The chamber was scheduled to return to Washington on Sept. 20.

Earlier, at the daily White House briefing, press secretary Jen Psaki was asked about pressure from some moderate House Democrats to hold an immediate vote.

“His message is that he remains committed to passing each of these pieces of legislation, on dual tracks. That he is going to work in lockstep with Speaker Pelosi, just as we have worked in lockstep with (Senate Majority) Leader Schumer, successfully over the last several weeks and months to get this done, and he is confident in the leadership, the strategic approach of Speaker Pelosi and looks forward to being her partner in the weeks ahead,” Psaki told reporters.

Still, Biden took every opportunity to tout this achievement, noting that the infrastructure bill passed the Senate with more bipartisan support than Federal Highway Act of 1956.

“America has often had the greatest prosperity and made the most progress when we invest in America itself. And that’s what this infrastructure bill does,” he added, praising the “overwhelming support” with which it passed. “A vote margin bigger than when the Interstate System passed in the United States Senate in 1956,” he said.

Biden also proudly pointed out that he had kept his promise not to raise taxes on those making less than $400,000 — and would benefit working class families the most.

“We’re going to do all of this by keeping my commitment. We will not raise taxes by one cent on people making less than $400,000 a year. Everyone from union to business leaders, to economists, left, right and center, believe the public investment contained in this bill will generate more jobs, higher productivity, higher growth for our economy over the long-term,” he insisted.

Vice President Kamala Harris spoke before the president, also extolling praise for the deal that moves the country “one step closer to making a once in a generation investment in our nation’s infrastructure,” and Biden, for his commitment to bipartisanship.

“Even when you sign the bill into law, our work will not stop,” she said.

After the Senate passed the $1.1 trillion bipartisan infrastructure bill by a vote of 69-30, with 19 Republicans joining Democrats, Schumer immediately turned the chamber’s business to the $3.5 trillion “human infrastructure” package which Democrats are hoping to pass via budget reconciliation, a process would not require the Republican support they do not have.