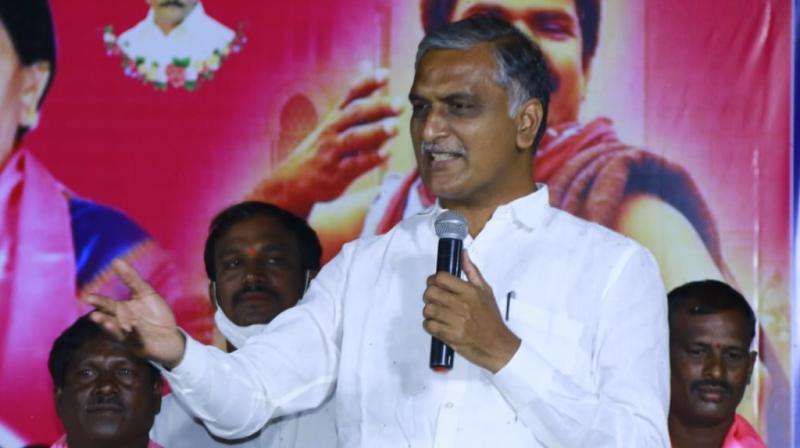 They rushed to Karimnagar by a helicopter after some Dalits held protest rallies and blocked roads in Huzurabad constituency alleging irregularities in the selection of beneficiaries. They reviewed the selection process and beneficiaries’ names by holding a meeting with Karimnagar district collector R.V. Karnan and other senior officials at collectorate complex.

The frequent flip flops on number of beneficiaries by ministers and officials in the district created apprehensions among Dalits who took to streets demanding  Dalit Bandhu for all Dalits on August 16.

When Chandrashekar Rao announced the Dalit Bandhu scheme in July, he stated that all 20,000 Dalit families in Huzurabad would receive Rs 10 lakh each for which Rs 2,000 crore was sanctioned but released only Rs 500 crore on August 10. Later, the ministers and officials in the district said only 20 Dalit families from each village would receive the amount on August 16.

On Saturday, they came up with a fresh statement that only 15 families would receive the amount from the Chief Minister on August 16 and the rest would be selected by conducting grama and ward sabhas in panchayats and municipalities which led to a huge uproar among Dalits.

Dalits are alleging gross irregularities in selection of beneficiaries stating that the Telangana Rashtra Samiti (TRS) activists and supporters bagged the benefit. They pointed out that while 470 Dalit families submitted applications, only 40 were selected in Veenavanka mandal including even those were ineligible as they were either government employees or non-locals.

Harish Rao and Somesh Kumar conducted an emergency meeting at Karimnagar collectorate to review the selection process and issued strict instructions to officials in this regard. They asked him not to give any scope for irregularities in selection of beneficiaries.

They asked them to submit a revised list of beneficiaries which will be submitted to the Chief Minister. The Chief Minister will select 15 beneficiaries randomly among them and will handover Rs 10 lakh cheques to each of them in the public meeting to be held in Huzurabad on August 16 to formally launch the Dalit Bandhu scheme.

Harish Rao appealed to Dalits not to believe in rumours on beneficiaries list stating that Opposition parties are spreading lies to create panic among Dalits. He assured that all the 20,000 Dalit families in Huzurabad would be covered very soon.

Should the census really ask about race and sexuality?

AP to finish 80K TIDCO houses in next six months

The distressing, dysfunctional politics of a world with endless COVID