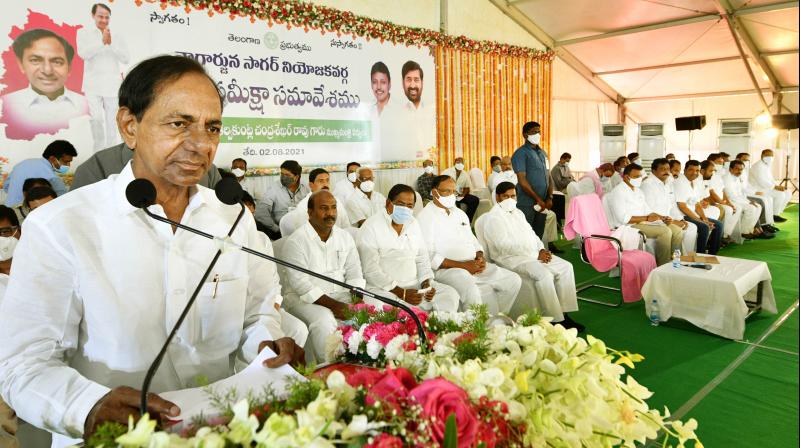 Karimnagar: The district administration along with the TRS party cadre has made elaborate arrangements for Chief Minister Chandrashekar Rao’s tour programme on August 16, ahead of the by-elections in Huzurabad constituency. The CM’s meet will be held in Shalapally village of Jammikunta mandal.

The 14km-stretch of roads from Huzurabad to Jammikunta and all the bypass roads leading to Shalapally are turning pink with billboards, flexes and flags of the TRS party.

The meeting is expected to draw around 1.2 lakh people from the constituency, largely from the dalit communities, marking the launch of the Dalit Bandhu pilot project in Huzurabad alone by the CM.

The officials and the ruling party leadership had plans to distribute cheques under the scheme to around 2,000 people from dalit communities, selected four from each village, but later restricted this to only 15 members. For, complaints came from dalit communities that irregularities occurred in the selection of the beneficiaries.

Officials arranged around 825 buses for bringing the dalits from various villages and deployed one in-charge officer to each bus apart from making arrangements for food packets and water facility for them.

The meeting venue was divided into 10 blocks with barricades. Of these, five are for women and the remaining for the public representatives and the general audience. There will also be special galleries for VIPs and the media.

State ministers Harish Rao, Koppula Eshwar, Gangula Kamalakar and BC corporation chairman Banda Srinivas were supervising the arrangements along with officials for making the meeting a grand success.

The police department under the supervision of police commissioner Satyanarayana made tight security arrangements and deployed thousands of police personnel on duty to prevent any incident.

Cops also issued orders for traffic diversion and fixed parking slots for vehicles streaming in on August 16. Travel permission on the Jammikunta-Huzurabad road will be limited to only vehicles coming for the meeting on that day.

Should the census really ask about race and sexuality?