It will be about winding a two-coil output transformer on a twisted split core-type magnetic circuit. The main donor is a pair of power transformers from industrial power supply units (Photo 2). Winding wire – used. The reduced load resistance of future output transformers is 5 kOhm (for 6P6S, 6F6, 6V6 lamps, etc. with a relatively high internal resistance, triode switching), possible AC resistance – 4, 8, 16 Ohm. Interlayer and intersectional gaskets – drawing tracing paper 0.05 mm. Layer-by-layer impregnation with wax-paraffin mixture. The transformer can be used in single-ended and push-pull output stages. In any case, ultralinear switching is possible, part of the anode winding can be transferred to the cathode circuit (local OOS).


Photo 2. Power supply rack module with a dismantled transformer. It resembles the TS-80 in size.
A few words about materials. The work used foot, available materials – we live somewhat remotely both from shops and from the post office. It is expensive and time-consuming to get to them, and the cost of postage is higher than the price of the contents. It is mainly about the winding wire. A number of measures were forcedly taken due to the inaccurate correspondence of the diameter (ensuring the symmetry of two coils of one tr-p in case of push-pull application, filling the free space in the layer, connecting pieces in the winding) and old fragile varnish insulation (impregnation).

What was needed for the work.
A set of small locksmith's tools, special devices for winding work, materials – wire, paper gaskets, trifles.
To the point.
Prepared the proper amount of wire. The main concern is the wire for the anode winding – it takes a lot. Wire with a diameter of ~ 0.3 mm.

Photo 3. Winding the wire from the old transformer. By the way, also an output industrial push-pull on a SHL core. The reel is mounted on an axle in the racks for convenience.


Photo 4. When working, you cannot do without good large coils. These were carved out of a thick birch board. 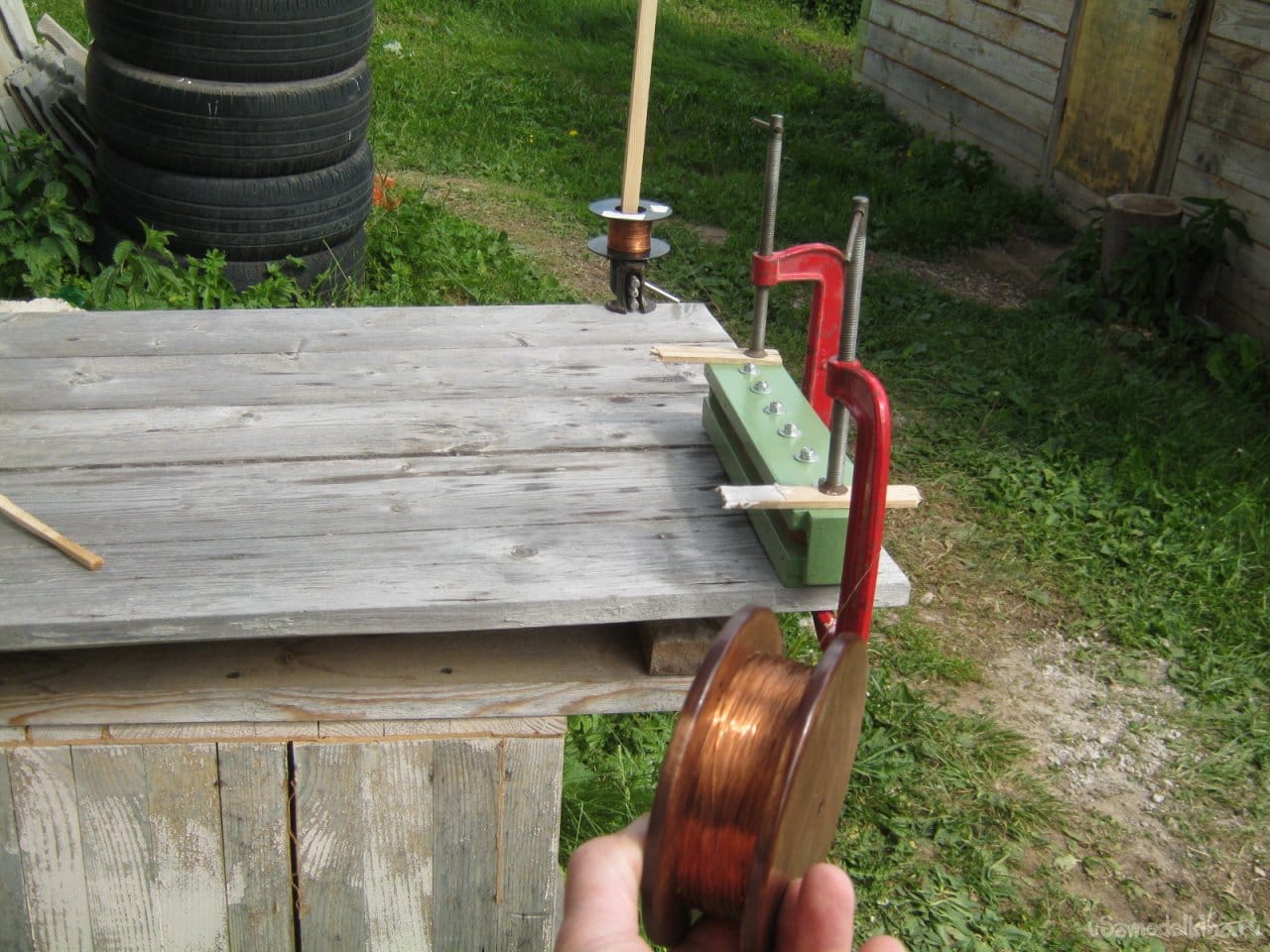 Photo 5 Of course, the wire wound from old coils cannot be immediately put into winding – it is noticeably uneven, the winding of a new transformer, and so not too dense, will be completely loose. In the photo, the work aligners – devices with a number of wheels . After that, the wire is as good as new.
We sorted all the extracted wire, weighed each coil and divided it so that both halves of the transformers were as symmetrical as possible, well, both transformers in the right and left channels did not differ too much.
The donor transformer (Photo 2) disassembled – unscrewed the fasteners tightening the halves of the “horseshoes” of the core, clamped one of them in a powerful vice, pounded the other with a hammer through a wooden gasket. He freed the coils, wound the wire from them. I cleaned the carbolite frames from burrs and the remains of the hardened ferromagnetic paste (inside), sawed through two additional slots on each side of the cheeks for the numerous outputs of the output transformer (Photo 6).


Photo 6. Frames of one of the transformers prepared for winding. From dry birch I planted and precisely fitted a bar along the inner section of the coil frames, drilled a hole in the center for the axis winder , installed one of the frames in the machine. In a convenient place I set and fixed a stand for a coil of wire with a carpentry clamp. After several evolutions, I found out its most convenient position – when the machine handle is rotated clockwise, the wire is fed from under the hand (Photo 7).

Photo 7. Winding device at work. The coil contains more than one thousand carefully laid turns – winding it all at once, in one sitting, is painful. Music, audiobooks and numerous breaks help to work with pleasure. During breaks, the coils have to be fixed against spontaneous unwinding. Both supply and transformer. It turned out to be convenient to stop the feed with a piece of soft cloth stuck in from the bottom (Photo 8), the receiving one with a piece of wide adhesive tape glued obliquely along the winding (Photo 9). 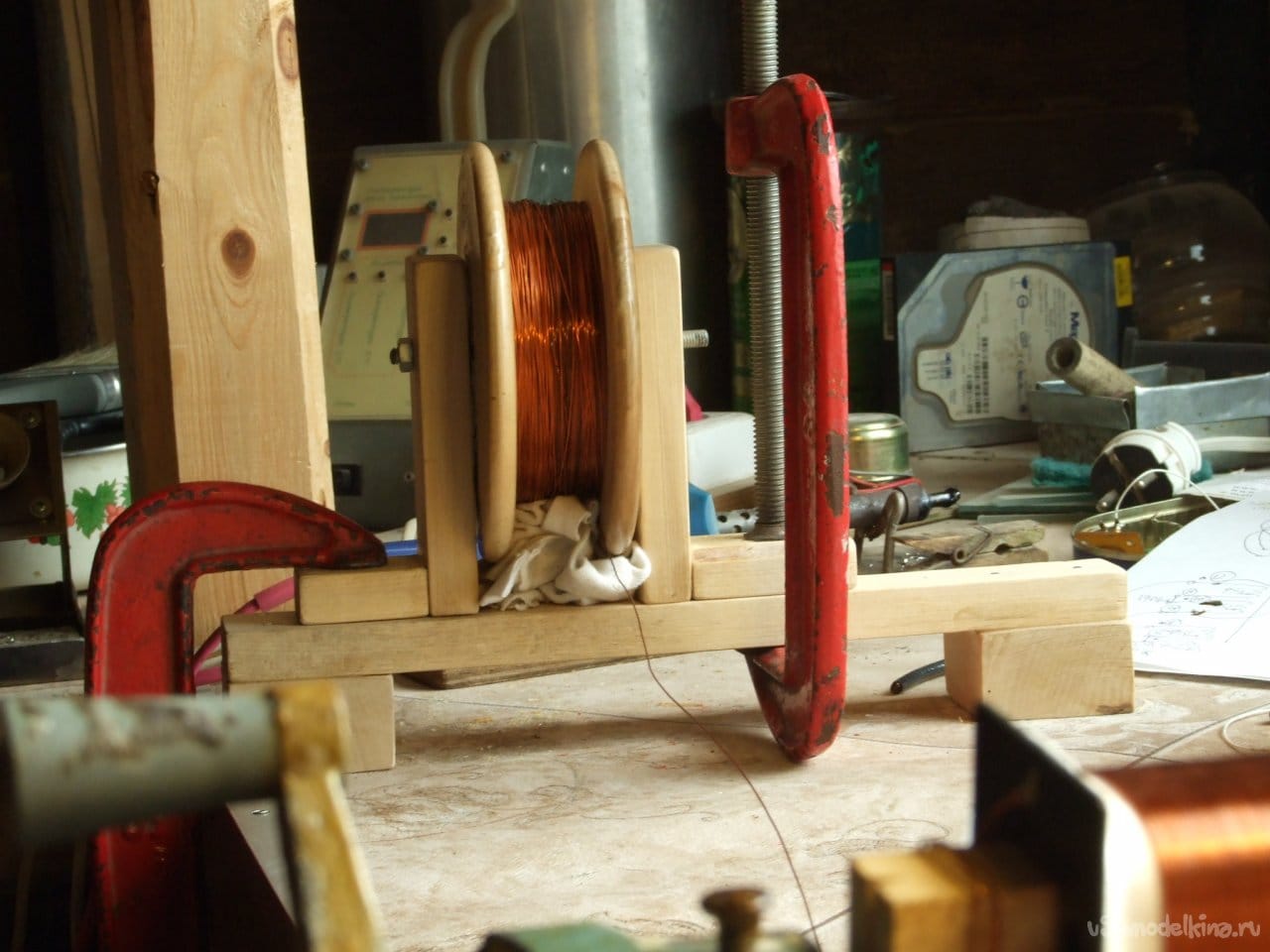 Photo 8. Locking the feed spool during a break in winding. 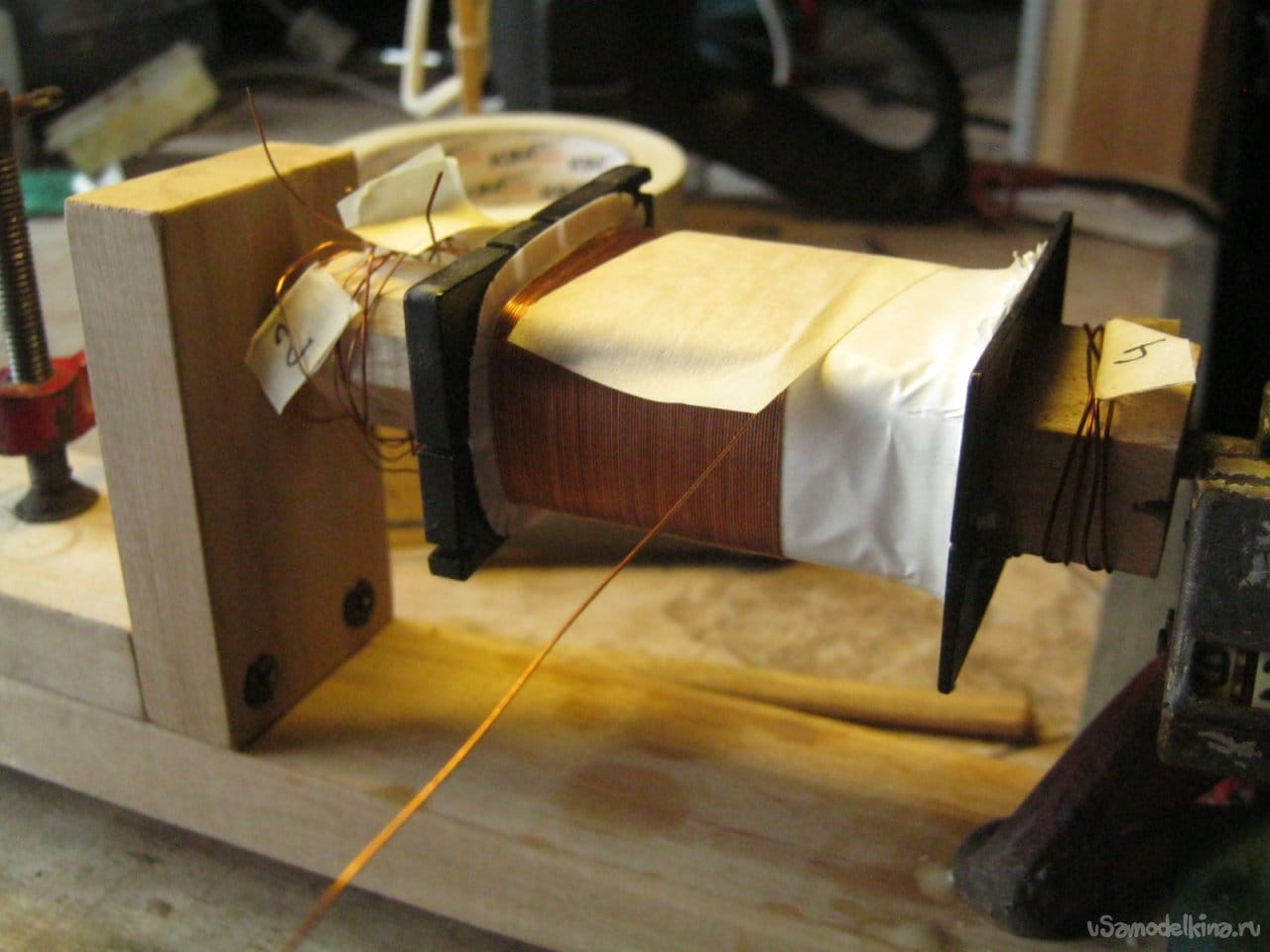 Photo 9. Temporary fixation of the coiled turns with masking tape. The described pair of transformers was wound, among other things, to test several ideas – insignificant and uneven sectioning (most of the primary is closer to the core), equalization of the parasitic capacitance by a gradual increase in the thickness of the interwinding insulation (Fig. 10).
Winding map. 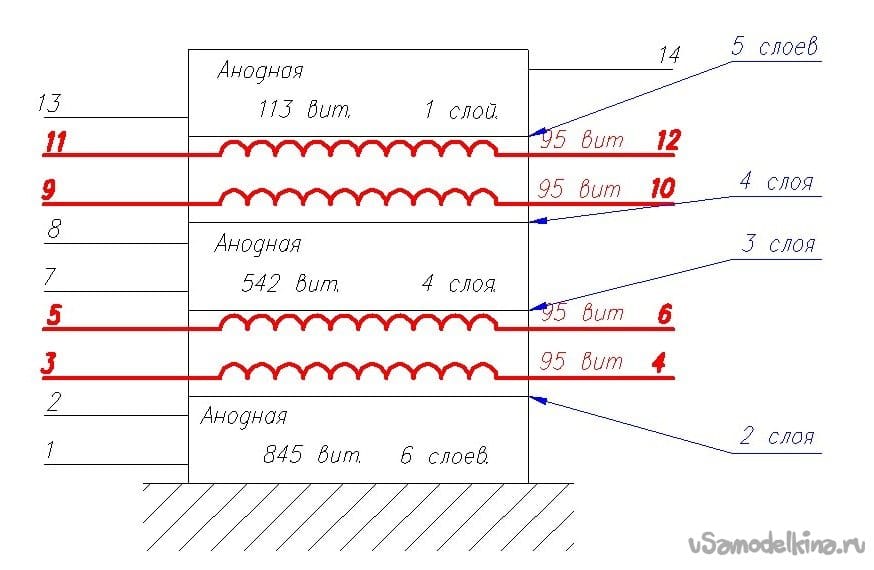 Rice. 10. Map of the winding of one of the coils of the described output transformer. Primary winding – wire dia. ~ 0.3 mm, secondary ~ 0.8 mm. Gaskets – interlayer 1 layer of drawing tracing paper, interwinding see figure.
The winding map (Fig. 10) is corrected according to the actual values ​​of the wire that fit in the layers. The anode sections in the finished transformer are connected in series – the requirements for its accuracy, especially in a single-cycle application, are low. The sections of the secondary winding (Fig. 10, highlighted in red) are connected in parallel at both coils and must contain exactly the same number of turns. Fortunately, there are few of them and are made with thick wire. When winding, the turns in the finished uncovered section, and this is one layer, was counted with a sewing needle under a magnifying glass. If a transformer is used in a push-pull cascade, both coils of one transformer must also be exactly equal.
Gaskets
The output transformer is very picky about the spacers used. This is caused by a large amount of thick interlayer insulation, a high value of the resulting parasitic parameters. As a spacer, I used a textbook version – tracing paper with fringes cut along the edges (Photo 11) to prevent the coils from sinking along the edges.


Photo 11. Gasket from tracing paper. The fringe was cut with small nail scissors. I cut the marked long strips of tracing paper with a sharp clerical knife under a metal ruler, cut the fringe with scissors. It turns out faster if you put the strips in a pile and bite through the edges with side cutters with victorious blades.
Impregnation
Layer-by-layer impregnation of the winding, with a wax-paraffin mixture – on an electric laboratory (adjustable and low-temperature) hotplate, I fused pure beeswax with broken paraffin (stearic?) Candles in a stainless (maybe aluminum) vessel. When using conventional heaters, especially fire heaters, a water bath should be used – molten hot wax is highly flammable.
The cooled but still warm alloy was molded into small convenient sticks as thick as a finger. 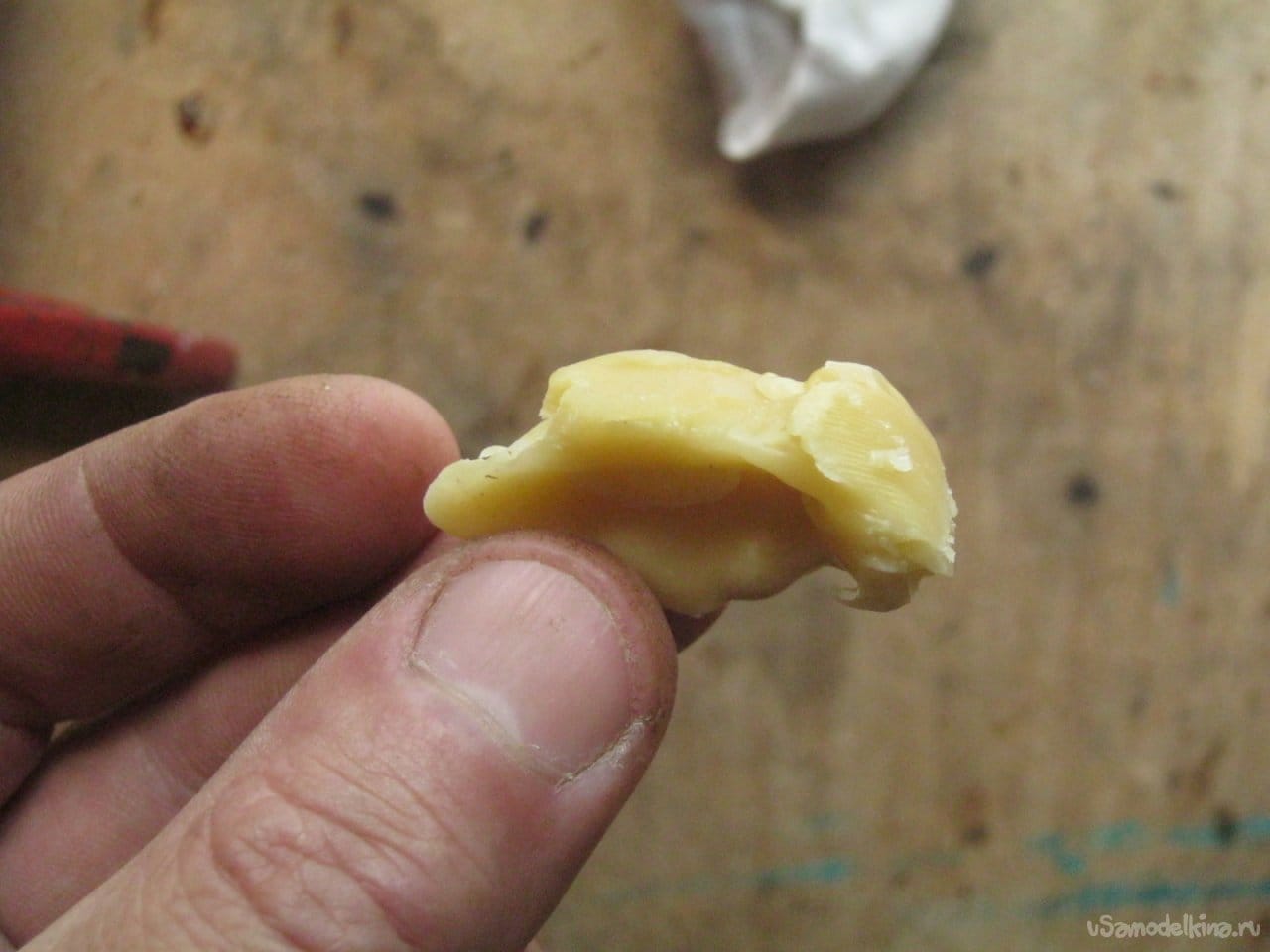 Photo 12. “Stub” of a wax-paraffin stick. For impregnation with the prepared composition, I acted as follows: after winding a layer of wire, before covering it with a paper gasket, I slightly warmed the copper with hot air from a building hair dryer and fidgeted over the winding with a stick of wax. Having softened, it smeared thickly and unevenly on the winding (Photo 13).

Photo 13. Softened wax smeared on the winding. Once again, blowing hot air over the winding, we melt the adhered wax, liquid, it is pulled inward by capillary forces, the paper is impregnated. We repeat the procedure until the absorption stops, remove the smudges from the bottom with a wooden spatula (Photo 14). We lay the paper strip tightly, glue its end with glue-pencil, continue winding.
< img class = "aligncenter" alt = "Universal output transformer for tube UMZCH" src = "https://usamodelkina.ru/uploads/posts/2021-08/1629028175_14.jpg"/>
Photo 14. Removing wax influx. The impregnation of the output transformers allows, among other things, to improve, to heal the flaws in the varnish insulation of the old wire, to significantly reduce losses and probable overtones from magnetostriction, however, it increases the parasitic interwinding capacitance and narrows the band of reproducible frequencies “from above”.
Winding
Several techniques regularly used for winding.
Filling an empty space in the winding. These are the secondary winding sections. Forced, by a limited assortment of available wire, measure. When designing a transformer, you should choose a wire so that the required number of turns of the secondary (transformation ratio) falls into an integer number of layers. Acting “from the landfill” happens differently. Irregularities in the layer, however, must be avoided in every possible way and instead of the turns missing to the cheek of the frame, fill the place with a convenient dielectric.
Ordinary sewing threads work well as such (you will have to spend a lot), a thin cord. Large gaps are filled with strips of paper cut along the width of the voids, for example, printer paper (0.1 mm). Wax-impregnated thread windings become monolithic and hold well even heavily stretched, hand-wound, wire.

Photo 15. Filling the empty space of the winding. A paraffin-coated cord is used for tying wiring harnesses.

Splicing pieces of wires. Also not from a good life. He stripped the ends of a piece of winding wire with a sharp blade from varnish insulation at a length of ~ 7 … 10 mm, tinned it, welded it with an overlap. Insulated with tracing paper folded in half. The ends of the tracing paper go under the winding. 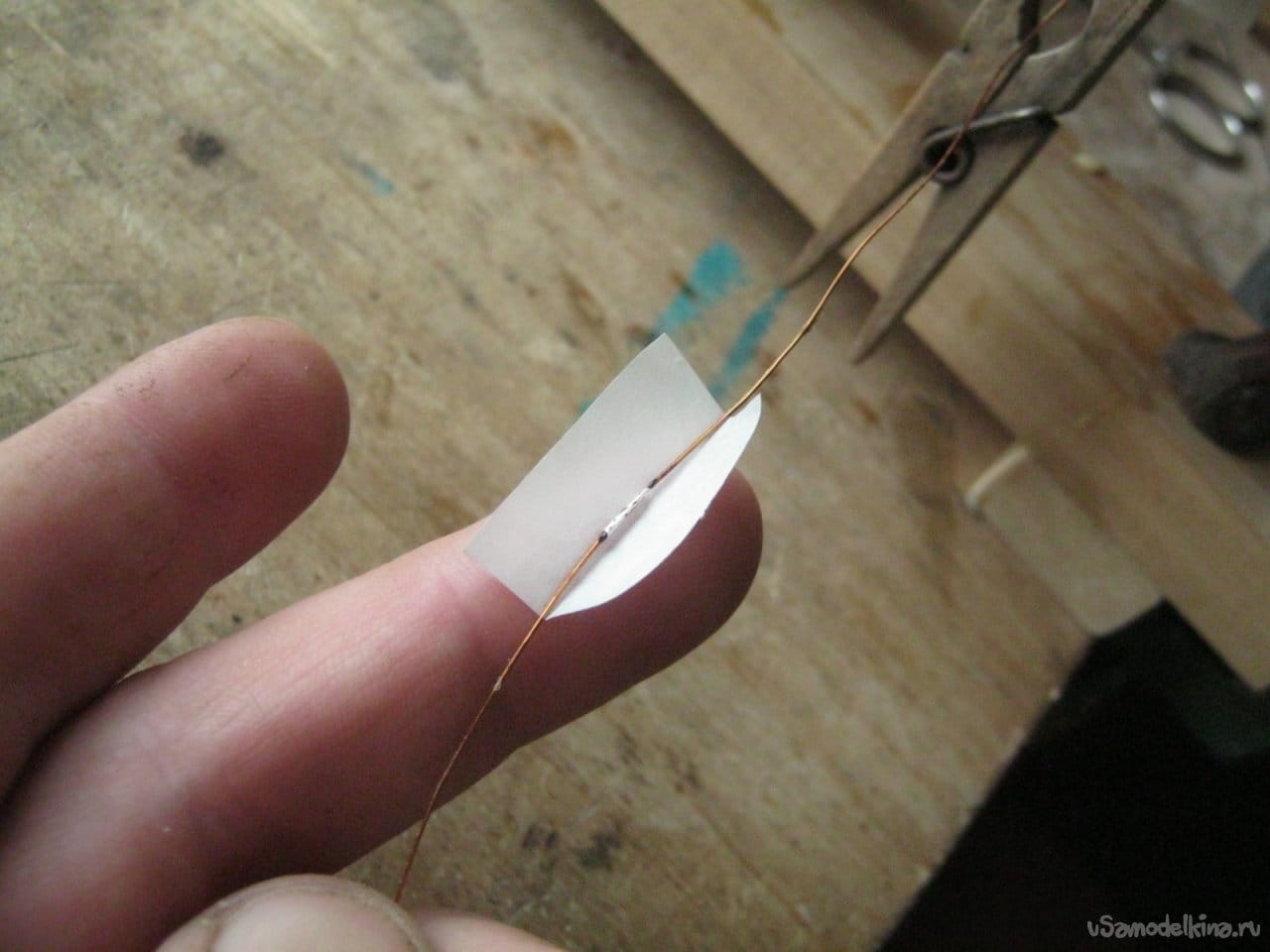 Photo 16. Insulation of the winding wire splicing.
Photo 17. Place of soldering in finished wax winding. On a dense aligned winding, the gasket should fit without distortions, steps, tears. All thickening of the winding should be planned and executed on the outer (narrow) side of the coil – leads, soldering wire pieces, overlaps of gaskets for gluing (Photo 18). 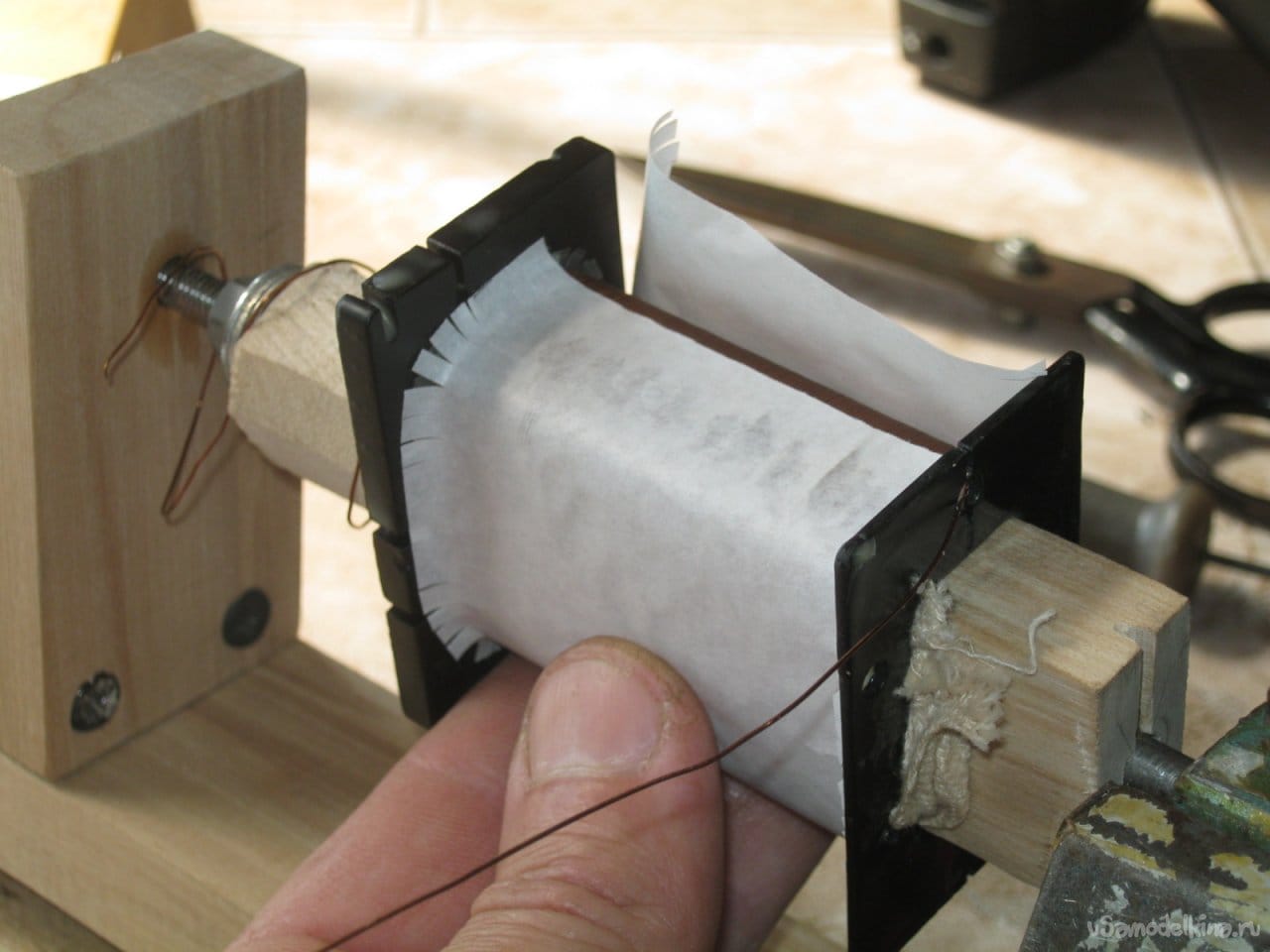 Photo 18. Overlap of the end of the interlayer gasket – thickening. Made on the narrow, external (in the finished assembled transformer) side.
[/center]
I recommend marking the conclusions and leaving them with a margin – it will be easier to make connections between sections, the probability of error is less (Photo 19). 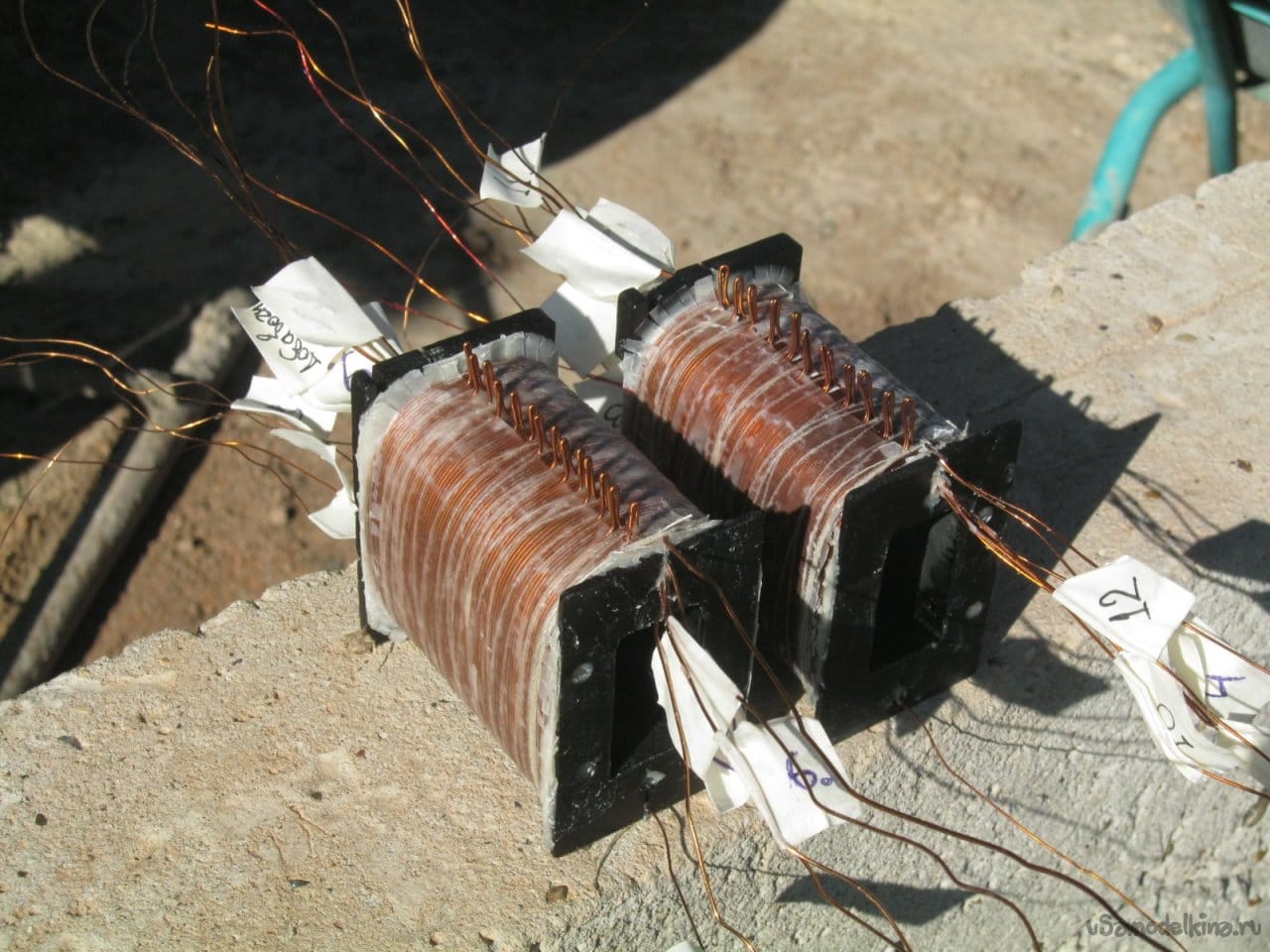 Photo 19. A finished pair of coils of one of the transformers. An experimental winding is wound on top for an accurate fit to the AC resistance. It is necessary for the pentode (tetrode version) of switching on the output stage lamps.
Assembling the transformer
Twisted cores often delaminate, we are not lazy to glue the plates (Photo 20, 21). 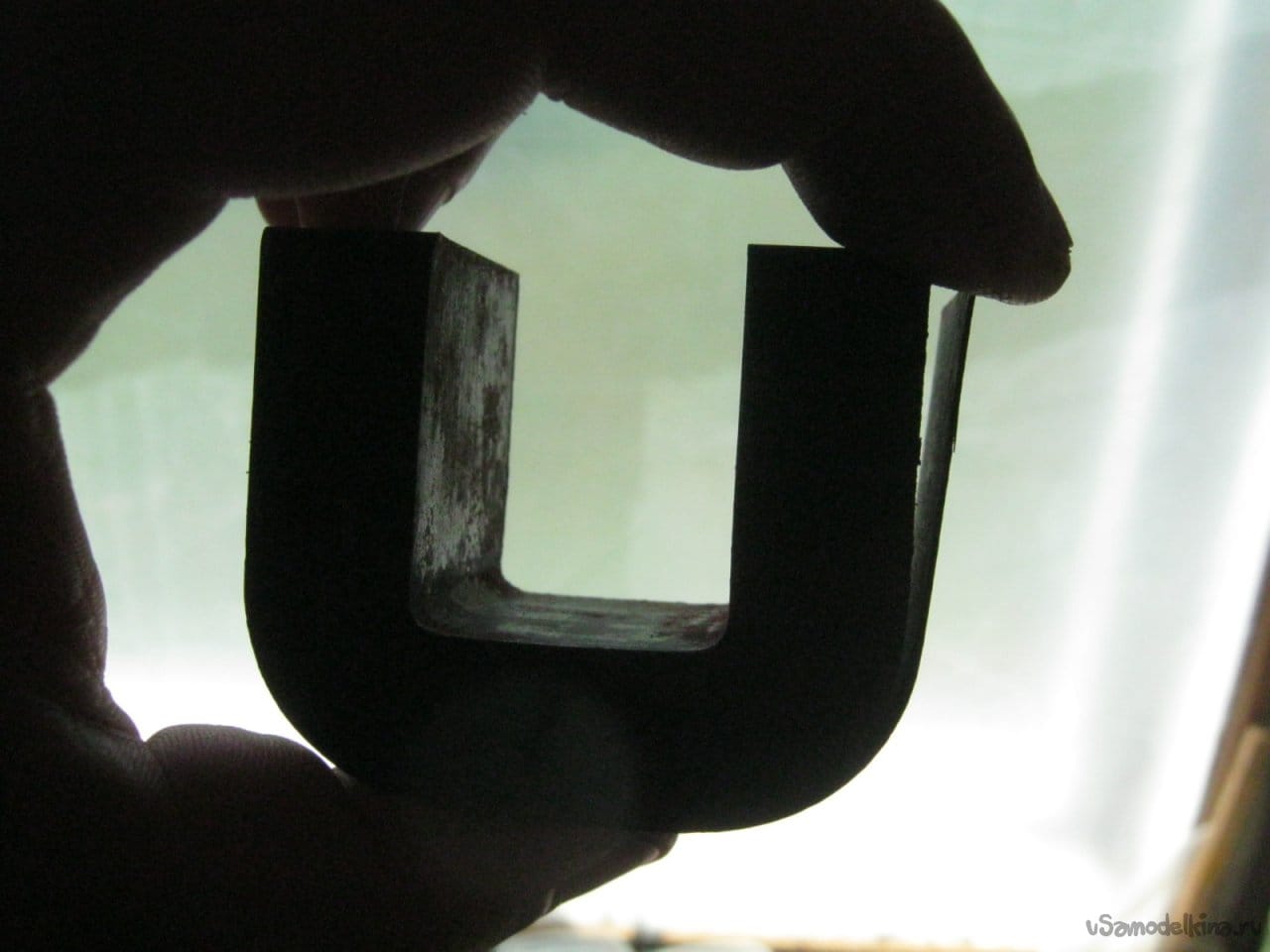 < img class = "aligncenter" alt = "Universal output transformer for tube UMZCH" src = "https://usamodelkina.ru/uploads/posts/2021-08/1629028213_22.jpg"/>
Rice. 22. Connection diagram of winding sections in a two-coil output transformer for a push-pull stage. The number of turns is shown as an example. Picture from the Internet. 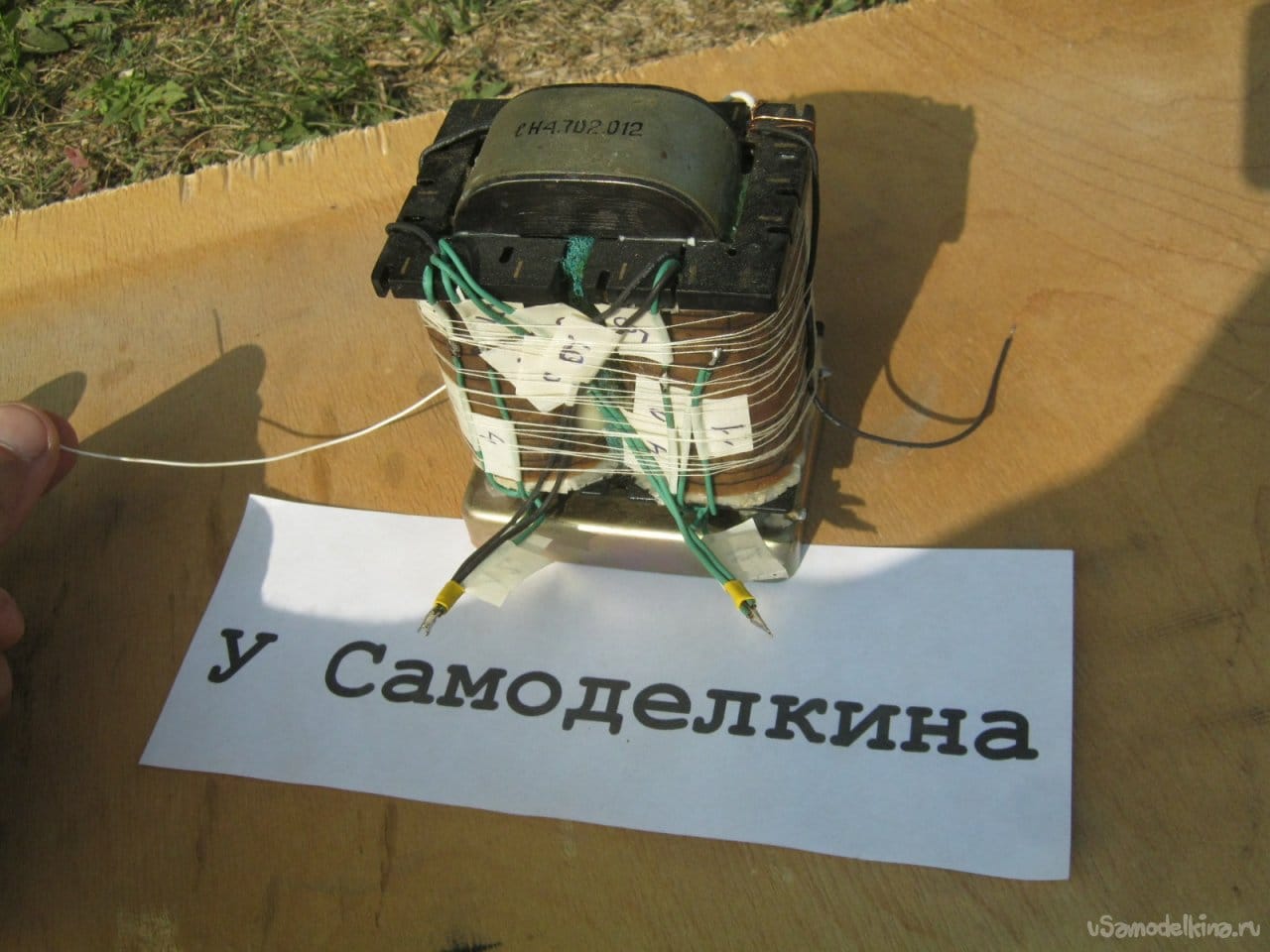