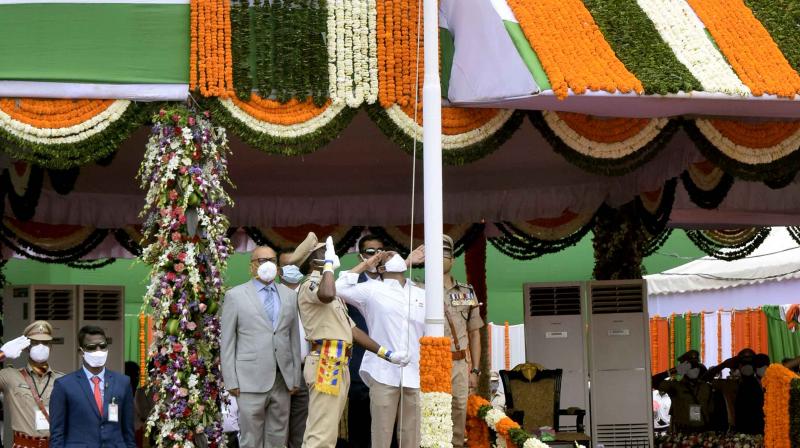 VIJAYAWADA: Chief Minister Y.S. Jagan Mohan Reddy has asserted that it is time to set new goals and help everyone by providing equal rights to all. The chief minister said this while hoisting the National Flag at IGMC stadium here on the occasion of the 75 Independence Day on Sunday.

“Our government has undertaken numerous welfare schemes for the development of all communities in the past 26 months. Everyone should observe the difference in their areas to know what good is happening around,” the CM said.

Listing out the welfare schemes, Jagan said the government has spent Rs 83,000 crore on agriculture alone. This included, among other offers, providing quality electricity for nine hours a day, a payment of Rs13,500 every year under the Rythu Bharosa, and Rs1,261 crore towards zero interest crop loans.

After reviewing the colourful parade, the CM said that for the last 26 months, the people's government took several steps to create an environment congenial to all segments of the people. “During my 3,648km padayatra, it was found that farmers and weaker sections of the society required additional support, students were in need of English medium education, women were seeking safety and security, while the poor expected better health services and hope for a transparent system without any corruption.”

“The decisions taken in the last 26 months have changed the course of the state's history, paving the way for the emergence of a better society,” the CM said.

He said the government has spent Rs 33,000 crore on paddy procurement, and paid the dues of Rs 960 crore on paddy purchase left unpaid by the previous TD government, Rs 9,000 crore of free electricity, and Rs 384 crore of seed arrears. RBKs have been set up in every village to assist the farmer from seeds to sale.

The Chief Minister said that 12 permanent jobs for every 2,000 people, totalling 1.3 lakh permanent jobs, were provided by his government with the establishment of Village and Ward Secretariats. It took governance right to the village level, offering over 500 services. Almost 2.7 lakh volunteers are door-delivering pensions to every eligible person on the first of every month, he said.

On the education front, the CM said the government aimed to ensure that every student got a professional degree, and no one dropped his or her studies due to a financial burden. In this regard, in the last 26 months, the state government has spent Rs 26,677 crore on education.

The chief minister said English medium has been introduced in government schools to help the new generation face the competitive world and seize opportunities. Through Nadu-Nedu, the looks of all government schools and colleges in the state were refurbished, giving them the look equal to that of corporate schools. A sum of Rs 3,669 crore has been spent on 15,715 schools in phase-1 of the project.

Also, students in government schools are being given Jagananna Vidya Kanuka with three pairs of uniforms, a school bag, bilingual textbooks, notebooks, workbooks, belts, shoes, socks, along with an English-Telugu dictionary right on the day the school reopened. Healthy and tasty midday meals are provided to children everyday under Jagananna Gorumuddha, which is costing around Rs1,600 crore every year, he said.