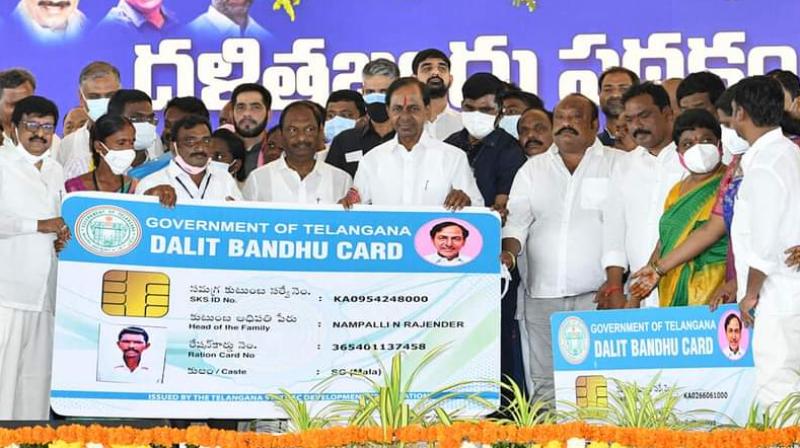 SHALAPALLY VILLAGE (KARIMNAGAR DISTRICT): Chief Minister K. Chandrashekar Rao on Monday sprang another surprise by announcing that each of the 17 lakh Dalit families in the state would get Rs 10 lakh assistance from the state government under the Dalit Bandhu scheme.

He made the announcement at the launch of the scheme amidst great fanfare in bypoll-bound Huzurabad Assembly constituency here. Initially, 13 lakh families were identified as eligible for the financial assistance, a one-time grant which the beneficiary need not payback. Now the scheme will be implemented on a saturation mode.

Addressing the gathering in Shalapally village, the Chief Minister, in his inimitable style, said he held back the major announcement and was revealing his mind now to ensure that his political rivals (‘kirikirigallu,’ according to him) “won’t die of a heart attack” due to sudden shock from the measure.

“It may cost a maximum of another Rs 40,000 crore but once I commit that I will deliver,” he said adding that all the Dalit families would be covered within the next few years by allocating Rs 30,000 crore to Rs 40,000 crore every year,” the Chief Minister said.

“I am ready to give and Dalits are ready to accept. Why should anyone else have a problem?” he said, adding that family members of government employees would also get Rs 10 lakh. He had announced that the ongoing welfare benefits like free rice and pension would continue for Dalit Bandhu beneficiaries.

The Chief Minister’s decision comes in the wake of apprehensions among the ruling party leaders that selective approach might prove counterproductive besides sparking protests by Dalit groups in several parts of the state demanding that they should also be given the benefit.

The Congress dubbed the announcement as a desperate attempt of the Chief Minister to wriggle himself out of what they described as a mess.

The Chief Minister handed over Dalit Bandhu cheques to 15 beneficiaries to mark the formal launch of the scheme. There were a few more surprises: Chandrashekar Rao greeted the gathering with the slogan ‘Jai Bheem’ and ‘Jai Dalit Bandhu’ instead of his usual ‘Jai Telangana’, and ended his speech likewise. He did not refer to about ousted minister Etala Rajendar and the BJP at all.

The Chief Minister also gave an emotional touch to the scheme by referring to his conversation with his wife before the announcement of Dalit Bandhu. Maintaining that she encouraged him to launch the statehood struggle, the Chief Minister said she had blessed the Dalit Bandhu scheme when he had discussed it with her. “She told me that I would somehow make it a success because I am stubborn,” he said.

The Chief Minister said Huzurabad would be treated as a laboratory to experiment the implementation of the scheme. So, it was the responsibility of the Dalit people of Huzurabad to make it a grand success by becoming economically strong after utilising the scheme.

Within a week, Rs 2,000 crore would be sanctioned to Huzurabad under the scheme, he assured. The comprehensive family survey showed there were around 21,000 Dalit families in Huzurabad constituency.

“If not KCR, some PCR will become Chief Minister, but no one will remove the schemes which were introduced by KCR. A lot of effort and brain work was put in before introducing these schemes,” he said.

Finance minister T. Harish Rao and welfare minister Koppula Eshwar accompanied Chandrashekar Rao to the dais which was set up at Indiranagar in Shalapally village of Jammikunta mandal in Huzurabad constituency.

A large number of people from five mandals in Huzurabad constituency and neighbouring districts attended the meeting. The Chief Minister paid floral tributes to the portraits of Dr B.R. Ambedkar and Babu Jagjivan Ram which were placed on the dais.