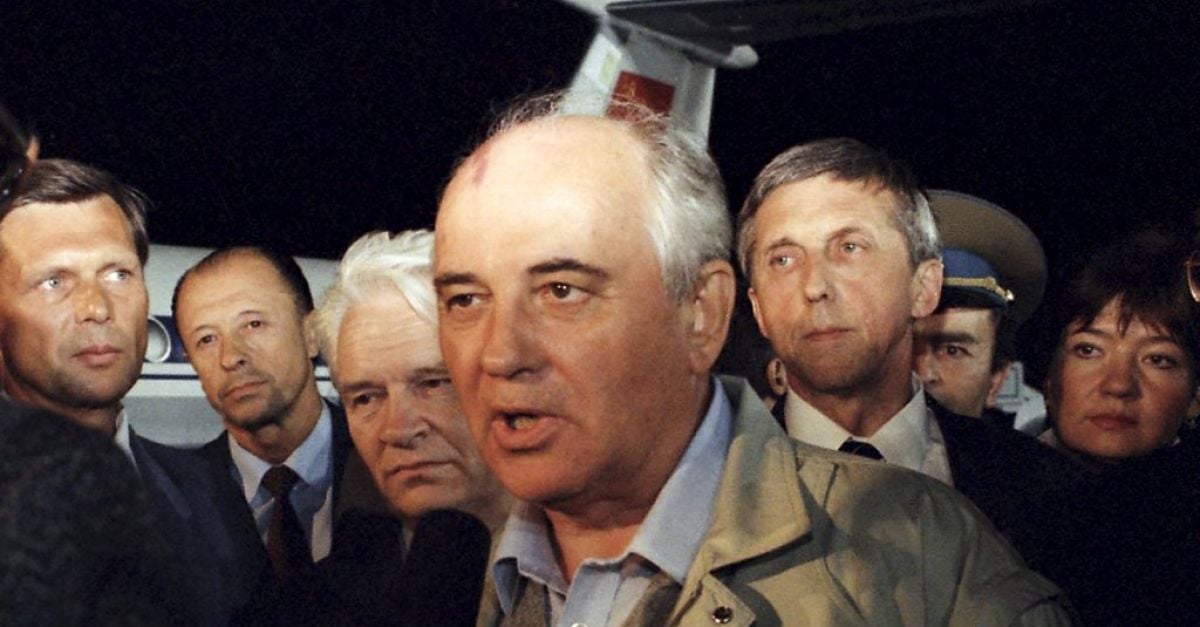 Russia has been reflecting on the 30th anniversary of the failed hardline Communist coup that attempted to topple Soviet leader Mikhail Gorbachev.

The world held its breath when a group of top officials ousted reformist Mr Gorbachev and flooded Moscow with tanks.

But instead of bringing an end to liberal reforms and a return to Cold War confrontations, the August 1991 coup collapsed in just three days and precipitated the break-up of the Soviet Union a few months later, an event the plotters claimed they were trying to prevent.

The putsch began when several of Mr Gorbachev’s top lieutenants arrived at his Black Sea holiday home on August 18 to urge him to impose a nationwide state of emergency.

They were trying to stop the signing of a union treaty between Soviet republics set for two days later, which Mr Gorbachev saw as a way to shore up the crumbling Soviet Union.

After he refused to endorse the state of emergency, the coup plotters cut off the Soviet leader’s communications and left him isolated at his residence.

The next day, August 19 1991, Soviet Union residents woke up to the televised broadcast of the Bolshoi Theatre’s Swan Lake ballet and state TV anchors reading a terse statement declaring that Mr Gorbachev was unfit to govern for health reasons.

The statement said the State Committee on the State of Emergency was created to save the country from sliding into “chaos and anarchy”.

At the same time, hundreds of tanks and other armoured vehicles rolled into Moscow in a massive show of force.

Thousands of people opposed to the coup quickly gathered around the government building for the Russian Federation, one of 15 Soviet republics, which was led by Boris Yeltsin, who enjoyed broad popularity as the leader of pro-democracy forces.

The orchestrators of the coup, meanwhile, were hesitant.

Vladimir Kryuchkov, the KGB chief and top mastermind behind the coup, had the KGB’s Alpha commando unit surround Mr Yeltsin’s residence near Moscow but never issued an order to detain him, allowing Yeltsin to drive to his headquarters.

“We decided to try to get to the office despite the risks,” Mr Yeltsin’s top associate, Gennady Burbulis, said.

Some troops surrounding the Russian government building even joined the protesters.

After arriving, Mr Yeltsin climbed atop a tank deployed to block the building and passionately urged people to stand up to the coup.

Mr Burbulis said he tried to discourage Mr Yeltsin from getting on the tank because of the high risk, but Mr Yeltsin dismissed his warning.

“It was in Yeltsin’s character to resolutely and unabashedly defend what he considered right,” Mr Burbulis said.

Within hours, it became clear the coup was crumbling.

When the coup instigators showed up at a press conference, they were sweating and stuttering.

Some could not prevent their hands from trembling as they struggled to fend off sharp questions from the media.

Later that evening, state TV showed the nervous, indecisive coup plotters along with a defiant Mr Yeltsin atop a tank, images that could not contrast more.

“They lacked the political will and the willingness to take responsibility for the country,” Viktor Alksnis, a hardline member of the Soviet parliament who backed imposing a state of emergency, said of the coup plotters.”

The following day, up to 200,000 people rallied near the Russian government headquarters to defy the coup, building barricades, roaming the streets and ignoring a curfew imposed by the coup leaders.

“There was a lot of excitement, enthusiasm, resolve and a strong belief in our consolidation and eventual victory,” Mr Burbulis said.

Another Yeltsin ally, Andrei Dunayev, quickly ordered about 1,000 police cadets to come to Moscow to protect Yeltsin’s headquarters with weapons.

He said that helped discourage the coup plotters from using force.

“They decided there would be too much blood,” he said.

Amid the tensions, a violent clash between troops and protesters in a tunnel less than half a mil) from the Russian government building left three protesters dead and others wounded.

Protesters, fearing a convoy of armoured vehicles was heading to storm the Russian building, blocked the street with buses.

Speaking in the Ukrainian capital of Kyiv, Gennady Veretilny said he was wounded as he tried to save Dmitry Komar, a protester killed when he got stuck in one of the armoured vehicles.

“The armoured vehicles were ramming the electric buses, trying to shove them away,” Mr Veretilny recalled, adding that he saw a man hanging from the rear hatch of an armoured vehicle.

“I ran up to him, reached my hands (to pull him out), and then a gunshot rang from over there and I felt burning and pain.”

Hours after the clash, Soviet defence minister Dmitry Yazov ordered troops to pull back from Moscow.

Later on August 21, some of the coup organisers flew to Mr Gorbachev’s Black Sea residence to try to negotiate, but he refused to meet with them.

The coup plotters were arrested and Mr Gorbachev flew back to Moscow on August 22 only to see his power dwindle and Mr Yeltsin calling the shots.

“He was kept prisoner for three days by the organisers of the coup, but when he was freed and had the possibility to return to Moscow, he was already the hostage of Yeltsin, because he owed to him his liberation,” said Andrei Grachev, who served as Mr Gorbachev’s spokesman in 1991.

“Yeltsin became the number one political actor on the Soviet scene.”

Less than four months later, Mr Yeltsin and leaders of other Soviet republics declared the Soviet Union defunct, and Mr Gorbachev stepped down on December 25 1991.

The arrested coup plotters faced trial but received amnesty in 1994.

Mr Grachev argued that Mr Gorbachev underestimated the danger that his hardline lieutenants posed to his rule.

“He considered them to be too mediocre, incapable of organising anything serious or challenging him,” Mr Grachev said.

Mr Gorbachev, 90, has spoken about the coup with bitterness, describing it as the fatal blow to the Soviet Union.

“Those three days of imprisonment were the hardest test in my life,” he wrote in his memoir.

In a statement issued on Wednesday, Mr Gorbachev said the coup organisers “bear a large share of responsibility for the country’s breakup”.