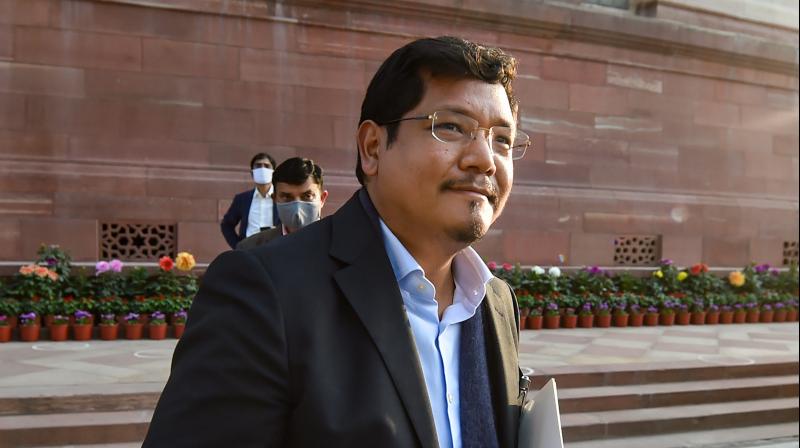 Guwahati: In what is being seen as the fallout of the killing a former rebel leader in his house, some miscreants hurled petrol bombs at Meghalaya chief minister Conrad Sangma's personal residence on Sunday after violence broke out in the capital city forcing the administration to impose a two-day curfew in Shillong. Mobile internet services have also been snapped in several parts of the state after reports of vandalism and arson.

Police however said that no one was hurt in the incident as the house was vacant. The chief minister stays at his official residence.

In a related development on Sunday, Meghalaya home minister Lahkmen Rymbui resigned, alleging in his resignation letter that former rebel leader Cherishstarfield Thangkhiew was "killed following the raid of police at his residence exceeding the lawful tenets of the law".

In his resignation letter to the chief minister he also proposed a judicial inquiry into the matter, adding, “I would like to request you to relieve the home (police) department from me with immediate effect. This will facilitate free and fair enquiry taken by the government to bring out the truth of the incident.”

The situation in Shillong was stated to be tense on Monday after the death of the former rebel leader whose family has termed his death a “cold-blooded murder by the police”.

Cheristerfield Thangkhiew, one of the founders of Meghalaya’s proscribed insurgent outfit Hynñiewtrep National Liberation Council (HNLC), which claims to fight for the Khasi-Jaintia tribal community against the outsiders from the Indian mainland, was killed when his home in Shillong was raided by police on Friday at 3 am. Thangkhiew, who had surrendered in 2018, was shot dead on August 13 when he allegedly tried to attack a police team with a knife during a raid at his house in connection with a series of IED blasts in the state.

Police said there was enough evidence to link the former HNLC leader to the two recent improvised explosive device (IED) blasts claimed by the outfit.

Violence broke out in four districts of the frontier state and vandalism and arson rocked the state capital and nearby areas on Independence Day.

A vehicle from Assam was also attacked in Shillong, seriously injuring the driver. Several incidents of stone-pelting were also reported from parts of the city.

The violence started after hundreds of people, in black clothes and carrying black flags, took part in Thangkhiew's funeral procession on Sunday. Several were seen lining up the streets in Shillong with black flags, condemning the police and the state government over the death of Thangkhiew.

Soon after the funeral, an angry mob set ablaze a police vehicle of the Mawkynroh Police Outpost in Jaiaw locality in Shillong.

However, police personnel travelling in the vehicle, including the officer-in-charge of the outpost, escaped the attack unhurt.

On Saturday, Meghalaya chief minister Conrad Sangma had said that the state government would order a magisterial probe into the death.